Breaking
John Kerry As Presidential Climate Envoy: Virtue Signaling...
Increased Risk Of Chronic Conditions Associated With Early...
Top ETFs This Week As Dow Ends Day...
As Biden Admin Eyes Canceling Student Loans, Taxpayers...
How Social Media Is Helping Cryptocurrency Flourish
Here’s What You Need To Know About AstraZeneca’s...
Mini Gifts: What To Get For Your Colleagues...
Report: Biden Picks Janet Yellen For Treasury Secretary
Policy Priorities
How To Poise Your Business For Success (And...
Eight Key Steps To Landing Your Product In...
Brands That Are Redefining Black Friday
How Much Room Is There For E-Kick Scooter...
Why We Must Update The Law For The...
The Tax Rules For Home Businesses And Working...
How To Use The ‘E.R.I.C.’ Framework To Tackle...
Home Business $600 Federal Unemployment Benefit At Risk: Here’s Where The Negotiations Stand
Business

$600 Federal Unemployment Benefit At Risk: Here’s Where The Negotiations Stand

The $600 weekly federal unemployment benefit has effectively expired. Now Republicans, Democrats and the White House are in negotiations over an extension of these benefits. Democrats want to extend the $600 benefit into next year. Senate Republicans have released a proposal that would reduce this benefit.

Both sides seem entrenched in their respective positions. Here’s how we got to this point and where negotiations stand on this important issue. 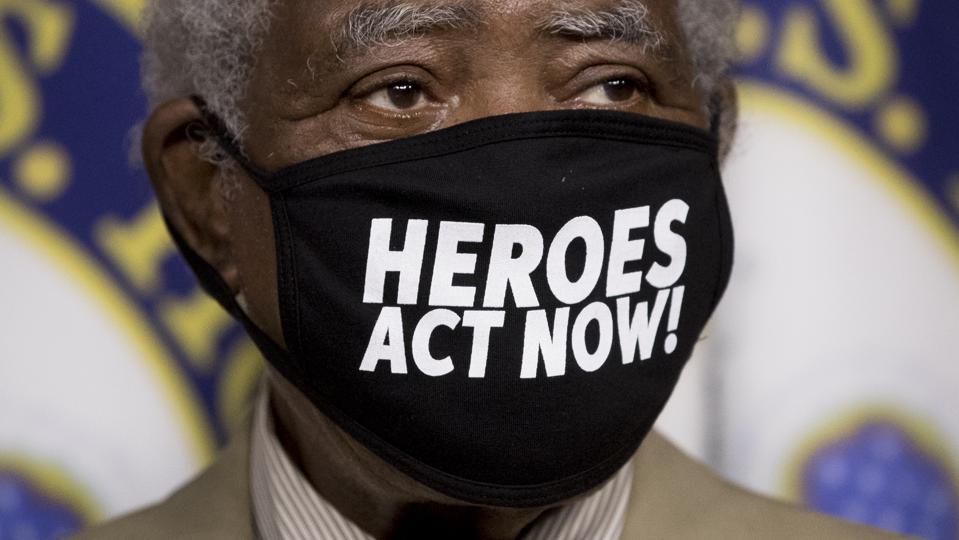 Rep. Danny Davis, D-Ill., wears a mask that reads “Heroes Act Now” as he appears at a news … [+] conference on Capitol Hill in Washington, Friday, July 24, 2020, on the extension of federal unemployment benefits. (AP Photo/Andrew Harnik)

How did we get here?

Under the CARES Act (Coronavirus Aid, Relief, and Economic Security), the federal government paid out $600 a week in additional unemployment benefits. These benefits were in addition to the UI paid out by the states. The flat payment was made regardless of each worker’s prior income. The benefit expires on July 31st, although given the way state UI systems work, it has effectively ended.

House Democrats passed the HEROES Act (Health and Economic Recovery Omnibus Emergency Solutions Act) in May. The HEROES Act provides for the extension of the $600 weekly payment through January 2021. The cost to extend and expand federal unemployment benefits would be $437 billion, according to the Committee for a Responsible Federal Budget.

This week, Senate Republicans introduced several bills collectively referred to as the HEALS Act (Heath, Economic Assistance, Liability Protection and Schools). The proposal would discontinue the $600 weekly benefit. It replaces it with a weekly benefit of $200 through September 2020. Thereafter it calls for federal unemployment benefits in an amount that would give laid off workers 70% of their prior income when combined with state UI. This benefit is capped at no more than $500 a week.

What are the arguments on each side?

The Republicans bristle at the idea of paying workers more in unemployment benefits than they made while working. As Senator Mitch McConnell explained, “[w]e also intend to continue some temporary federal supplement to unemployment insurance, while fixing the obvious craziness of paying people more to remain out of the workforce.”

“We’ll maintain some of the current boosted benefit, while responsibly honing programs to target help where it’s needed. This transition from a flat rate to a replacement of about 70 percent of lost wages is a better approach. Regardless, the boosted unemployment benefit is significantly more than the Democratic Senate and President approved in the 2009 economic crisis, and it doesn’t pay most people more than working like the extra $600 does.”

The $600 weekly unemployment benefit, when combined with state UI, pays many laid off workers more than they earned working. According to the WSJ, about half of all U.S. workers earn more in unemployment benefits than they did working. According to researchers at the University of Chicago’s Becker Friedman Institute, 68% of those eligible for UI will receive more than their lost earnings, the median income replacement rate is 134%, and about 20% of eligible unemployed workers will receive benefits at least twice as much as their lost earnings.

Some Republicans are also concerned that if employers are unable to bring workers back, it could jeopardize Paycheck Protection Program loans. Senator John Cornyn of Texas said that he had “heard from worried hotels, restaurants, and barbershops in Texas unable to rehire their workers and now at risk of losing their P.P.P. loans they need to survive.”

The Democrats believe these concerns are overblown. In an interview Senator Chuck Schumer said that people want jobs and don’t want to stay on unemployment.

Former Fed Chair Janet Yellen said it would be a “catastrophe” not to extend the unemployment benefit. It not only helps the unemployed, but it also aids the broader economy, she explained. In terms of creating a disincentive to work, Yellen said it would be more of a concern if we were closer to 100% employment. Given the lack of jobs, she is less concerned that extending the $600 federal unemployment benefit would encourage people not to work.

Where do negotiations stand?

Negotiations have been underway since Monday. Both sides face issues within their own ranks. For Republicans, there are some who do not support further spending due to the increase in federal debt that would result. Senator Lindsey Graham said that it would be “quite an accomplishment” if half of Senate Republicans voted for the HEALS Act, according to the WSJ.

Against this backdrop, it’s hard to imagine any scenario in which Senate Republicans would support an extension of the $600 unemployment benefit. Even the $200 benefit in the current HEALS Act may be in jeopardy.

Democrats have had their own issues. In recent weeks Democrats have said that the extension of the $600 benefit is nonnegotiable. Yesterday, however, House Majority Leader Steny Hoyer told CNN that his party’s position is not “$600 or bust.” He further explained:

“To say that $600 or nothing, no, that’s not where we are. We’re prepared to discuss this. But we’re also not prepared, however, to let down the American people, to let down the states, the cities, the local governments who hire people, who are meeting this pandemic’s crisis, including health personnel.”

When asked about Hoyer’s comments, Schumer responded that “[w]e don’t believe that,” according to one report.

I suspect that a compromise will be reached. For Republicans, a failure to extend any additional unemployment benefits would be political suicide for some and would likely hurt the economy. For Democrats, extending benefits that would continue to pay approximately two-thirds of recipients more than they made working is a tough sell, particularly if insisting on such an outcome jeopardizes passage of some additional unemployment benefits.

Because the extra unemployment benefits have effectively ended, time is of the essence. One approach would be a short-term extension of a flat rate benefit of some amount while a more tailored approach based on a percentage of a worker’s income is put into place. While not ideal, it may be the best alternative to no enhanced unemployment benefits at all.

Here are additional resources to follow this developing story: