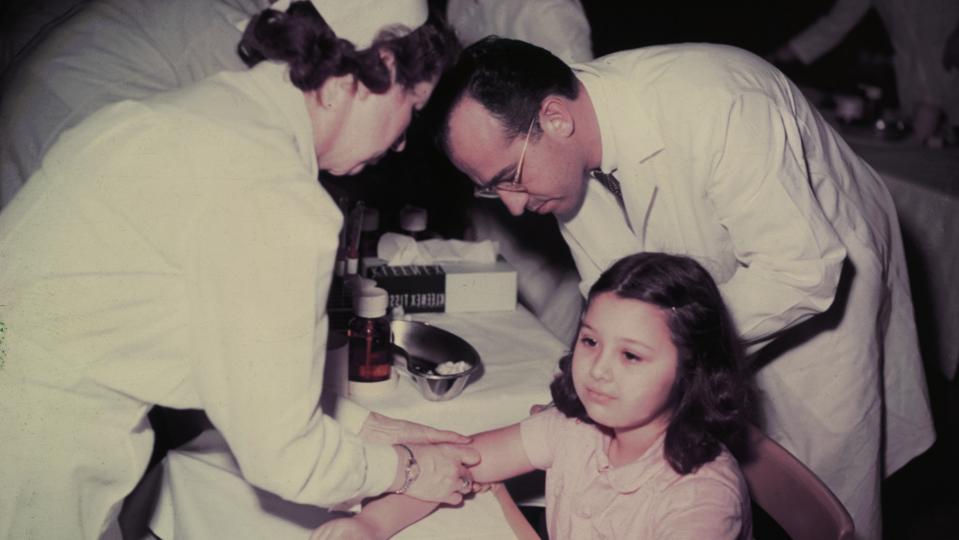 Dr. Jonas E. Salk and a nurse administer a polio vaccine to Pauline Antloger at Sunnyside school in … [+] Pittsburgh, Pennsylvania.

A massive clinical trial of a promising new vaccine against polio ended on this day in 1955. By the end of the year, a program of childhood vaccination had started in the U.S., and new cases of the deadly, paralyzing disease dropped from 35,000 a year in 1952 to just a few hundred a year. 65 years later, medical researchers are racing to develop a vaccine for the 2019 novel coronavirus, and looking back at the polio vaccine underscores just how far we’ve come.

People started recognizing a disease called “infantile paralysis” in the 1800s, but it took until 1908 for identify the culprit: a virus we now know as poliovirus, discovered by Karl Landsteiner. That knowledge was small comfort when a polio epidemic struck the U.S. full force in 1916. Phillip Drinker’s iron lung saved thousands of lives after its invention in 1928, but there seemed to be no way to protect the world’s children against the virus.

Fast-forward to 2019. The first known case of an unknown respiratory illness appeared in Hubei province in China on November 17, 2019, and by early January 2020, researchers had identified it as a coronavirus no one had seen before. By March they had sequenced its genome. And even against a humanity armed with that knowledge, the virus has infected 1.5 million people worldwide as of April 10. Knowledge is power, but it’s power that can’t always be wielded instantly.

In 1947 – nearly 30 years after Landsteiner discovered the virus that was paralyzing and killing children around the world – the University of Pittsburgh hired virologist Jonas Salk to work on vaccine research. The following year in New York, virologist Hilary Koprowski tested the first dose of his oral vaccine on himself. Koprowski’s vaccine was dubiously refreshing, but effective, glass of live but weakened polio virus, which he tested on 20 children at a home for disabled people (if you’re thinking there were some serious ethical issues with that, congratulations; medical ethics have come a long way since the mid-20th century).

Meanwhile, we were still learning more about the virus; in 1948, researchers confirmed the existence of 3 strains, and the following year, a team led by John Enders, Frederick Robbins, and Thomas Weller figured out how to grow polio in a tissue culture, which made it much easier to test possible drugs and vaccines against it. Two years after Koprowski’s tests, Salk began the first human trial of an injected vaccine, which used inactivated, or “dead,” virus to provoke an immune response.

It had taken the world’s top medical minds more than two centuries to progress from recognizing a disease to testing vaccines. Even after identifying the virus that caused polio, it took another 40 years to get vaccine trials up and running. But in 2020, the first human clinical trials for vaccines against SARS-CoV-2 are already underway just 3 to 4 months after the first people were infected. Moderna started a Phase I clinical trial of a potential vaccine on March 20, and Inovio announced a Phase I trial on April 6.

After the initial Pittsburgh trial, Thomas Francis at the University of Michigan organized a massive trial spanning 3 countries and 1.8 million children. The Francis Trial was the largest clinical trial ever conducted at the time, and one of the first “double blind” trials, in which neither the patients nor the researchers administering the drugs and monitoring the patients knew who was getting a placebo and who was getting the real vaccine (the trial’s organizers assign each patient or group a code number to track who’s getting which treatment). Francis announced on April 12, 1955 that the vaccine had proven 80% to 90% effective at preventing the worst, paralyzing form of polio.

By the end of 1955, Salk’s injectable polio vaccine was available to the public, and by 1957, the number of new cases in the U.S. had dropped by nearly 90%. A few years later, in 1961, an oral vaccine developed by Albert Sabin also finished its trials and came into widespread use. By then, Koprowski’s oral vaccine was also protecting children in several countries from the devastating disease – but not in the U.S., where authorities never approved Koprowski’s vaccine.

65 years ago, the polio vaccine took about a decade to produce, from the start of dedicated research to a public vaccination campaign. Today, public health authorities worldwide estimate that a safe, effective, publicly available novel coronavirus vaccine could be 18 months away – less than two years after doctors saw the first cases of the disease. But what does the road to a vaccine look like?

At the moment, two pharmaceutical companies, Inovio and Moderna, are conducting Phase I clinical trials of potential vaccines. A Phase I trial tests whether a drug or vaccine is safe to give to people. Once researchers have shown that the vaccine is safe and effective in lab animals, they get permission from the Food and Drug Administration (FDA) to give it to small number of healthy volunteers (Inovio has 40 volunteers, and Moderna has 45). During a Phase I trial, researchers aren’t checking to see if the vaccine works; they’re just watching for potentially dangerous side effects.

The next step is a Phase II trial, which is when researchers give the vaccine to more volunteers and test whether it’s really effective at protecting people, not just lab animals, from the virus. If that succeeds, the Phase III trial usually tests whether the new vaccine is more effective, or has fewer side effects, than the options currently available (that should be a shoo-in, since there are no options currently available for SARS-CoV-2). Then it’s time to submit an application to FDA, requesting approval to distribute the vaccine in the U.S.

Koprowski, Sabin, and Salk all came up with different ways to prod the human immune system into setting up defenses against the polio virus. Today, the research teams working on SARS-CoV-2 vaccines are using genetic codes or proteins, rather than dead or weakened viruses, but each team is working a slightly different angle. Inovio’s candidate uses a specially engineered loop of DNA called a plasmid to manipulate the human immune system into producing antibodies against SARS-CoV-2. Moderna’s version uses messenger RNA, the molecule that transcribes the genetic code from DNA. Dozens of other research groups are working on their own methods.

But we’re not likely to see another Jonas Salk or Albert Sabin; modern science isn’t done by lone heroes, but by huge teams of people all working together, often in relative anonymity. The future of the fight against COVID-19 depends not just on principal investigators or pharmaceutical CEOs, but on interns, lab techs, and janitorial crews.

What Has Corruption Got To Do With Human Rights Abuses?