Breaking
The WFH Revolution: How Covid-19 Is Changing The...
eToro Announces Staking For Cardano And Tron
Fintech Startups: Plan For Your Customers’ Emotional Realities
The End Of Third-Party Data — Finally
The Scientologist Billionaire Trying To Make A New...
Mission-Driven Fintech Kontist Shakes Up The Future Of...
What Can The Simple Fact That ‘We Exist’...
Stock Market: Here Comes October With Scary Tricks...
Farmers, College Students, And Food Banks Across The...
Thinking Of Writing A Book To Grow Your...
Microsoft Security Report Highlights New Sophisticated Threats From...
3 Steps To Help You Build Entrepreneurial Confidence
SMB Fintech Darling Kabbage To Be Acquired By...
Silicon Valley’s Next Target: The One-Person Business
The Small Business Code Of Ethics
President’s Remarks About COVID-19 At First Debate True...
Home Finance 7 Reasons Why Exxon, Chevron, And Other Oil Stocks Have Lagged…And What To Expect
Finance

7 Reasons Why Exxon, Chevron, And Other Oil Stocks Have Lagged…And What To Expect 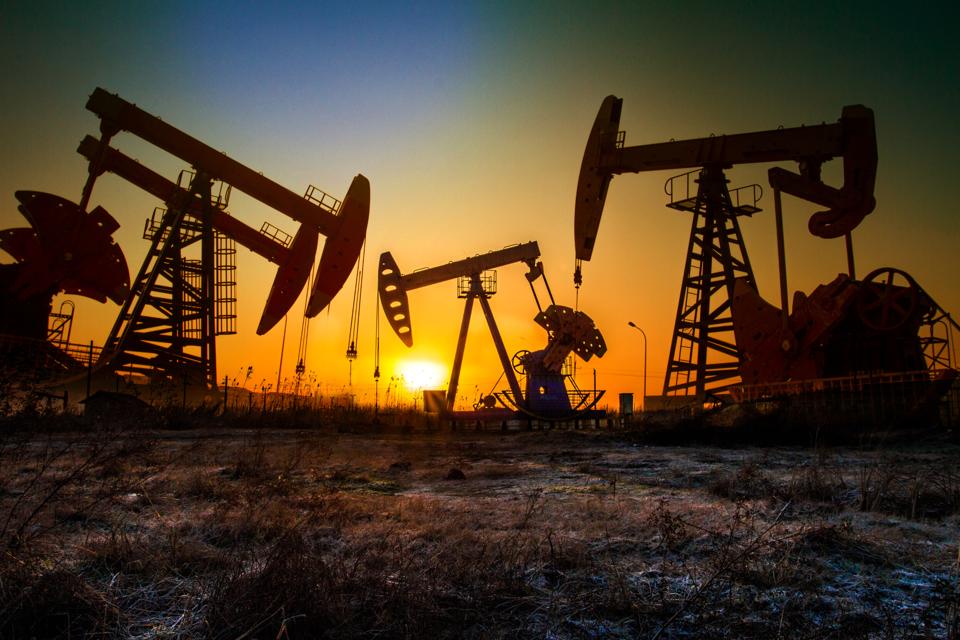 If you’ve been investing in Exxon, Chevron, Royal Dutch Shell, and other energy sector titans, you’ve probably been disappointed. You see, the performance of this group has greatly lagged the broader stock market over much of the past decade. What’s behind this underperformance? How long might it continue? Should you sell, hold, or increase your exposure to this sector? In this article, we’ll address these issues and look at seven keys to consider when investing in oil stocks.

The Price of Oil

When the price of oil rises, oil stocks tend to perform well. The following chart covering the past 10 years supports this point. In it, you will find the price of crude oil (Section A); the cumulative returns for the three largest oil companies: Exxon, Chevron, and Royal Dutch Shell (Section B); and the cumulative return for the S&P 500 Index (Section C). It should be noted that the performance numbers for the stocks and the index do not include dividends. Thus, it is does not reflect total return.

The chart also includes two vertical lines to mark key points during the period. Line A is placed at the point where the price of oil began to collapse (June 2014) and Line B marks its bottom (Feb 2016). Note how closely the price of these stocks followed the price of oil.

Author’s Note: If you would like to read more on how the price of oil rises and falls based on supply and demand, I encourage you to read an article I wrote on the subject in 2015. To read it, click here. 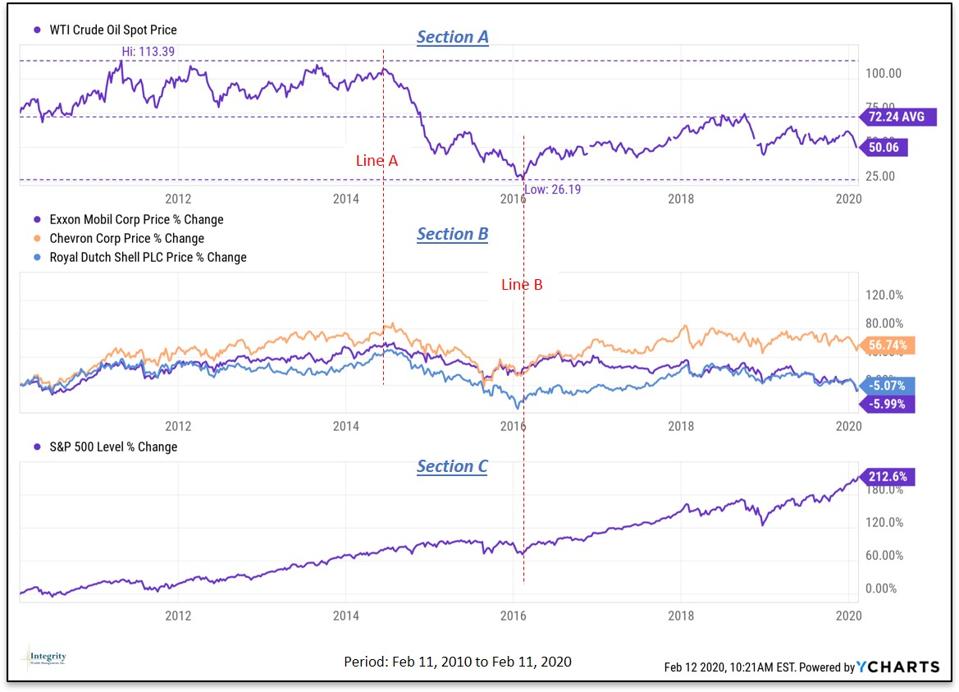 What are some of the key drivers behind the price of oil? Here are seven in no particular order.

Fossil Fuel Sentiment: The movement to replace fossil fuels with renewable energy has been gaining momentum. Much of this stems from the climate change thesis. As climate change becomes more widely accepted, governments will add new laws to reduce carbon emissions, and large oil companies will feel pressure to adapt. These types of momentous shifts usually take decades to materialize as people on both sides of the issue attempt to sway the undecided middle. I expect this trend will continue.

Increased Efficiency: U.S. energy efficiency has been on the rise. Today’s residential and commercial buildings, modes of transportation, etc. use less energy than 20-40 years ago. As technology continues to advance, I expect this trend to continue.

Weak Global Economic Growth: Despite a strong U.S. economy, the global economy has been weak for a while. Weak economic conditions reduce the demand for oil, pushing its price lower. This is likely to continue for a bit longer, but will eventually improve, and demand will rise once again.

Cost of Renewables: The cost of renewable energy has been declining. Solar and wind are expected to lead this group moving forward. Electric and natural gas powered vehicles will also play a major role. It is very difficult to say if the cost of renewables will continue to fall.

Coronavirus: The coronavirus is having a significant impact on the Chinese economy and the economies of many of its closest trading partners. Several companies in China have either closed or asked workers to work from home until the virus is contained. This has had a spillover effect as more than 40 airlines have ceased flights into the country. Parts of California that rely on Chinese tourists are suffering as well. All this contributes to less demand for oil. How much economic damage will this cause? That’s hard to say, but rest assured, this too will end, and things will return to normal.

Increase in U.S. Energy Production: With the help of technology, U.S. production of crude oil has been rising since 2009, hitting a record high in 2018. The U.S. is expected to become a net exporter of petroleum products in the not-to-distant future. It’s uncertain how long this trend will continue.

The Cost of Extraction: Oil prices have fallen over 55% since the end of April 2011 and more than 18% this year. When the cost of extracting the oil exceeds its price, many companies curtail their operations. This too, is uncertain.

In the future, renewable energy will become more widely used, but to become a dominant source, it must be deemed more cost effective than it is today. Moreover, oil is not going to disappear, but its role will likely change as renewables become more popular. What does this mean for the major oil companies? If this trend continues, I expect to see a rise in the consolidation of energy companies as corporate giants like Exxon or Chevron acquire some of the smaller, alternative energy providers. After all, if you can’t beat ‘em, join ‘em.

Even if the U.S. leads the rest of the world in the move to renewables, because the price of oil is subject to global factors, this shift could take a long time as the rest of the world joins in. If we are indeed in the early stages of a major transition from crude to clean energy, big oil stocks may continue to lag.

In short, I suspect the price of oil stocks will ebb and flow, but the long-term trend may not be as favorable to investors as it was in past decades.