Home Technology 73 Years After Its Debut, The Doomsday Clock Is 100 Seconds From Midnight
Technology

73 Years After Its Debut, The Doomsday Clock Is 100 Seconds From Midnight 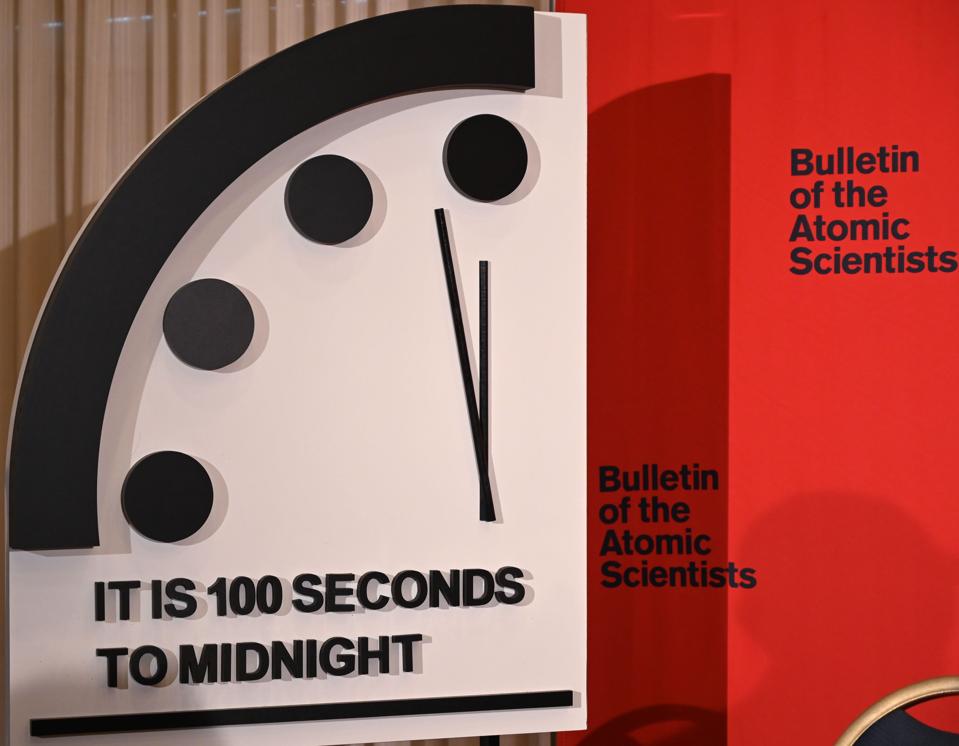 The Doomsday Clock reads 100 seconds to midnight, a decision made by The Bulletin of Atomic … [+] Scientists, during an announcement at the National Press Club in Washington, DC on January 23, 2020. – President and CEO of the non-profit group Rachel Bronson said “It is the closest to Doomsday we have ever been in the history of the Doomsday Clock.” The clock was created in 1947. (Photo by EVA HAMBACH / AFP) (Photo by EVA HAMBACH/AFP via Getty Images)

73 years ago, the same scientists who had helped to begin the atomic age set a “doomsday clock” for humanity. It first appeared on the cover of the June 1947 issue of the Bulletin of the Atomic Scientists as a dire warning about the nuclear rivalry between the U.S. and the Soviet Union. At that moment, the Bulletin estimated that we stood at about 7 minutes to midnight, which represented nuclear apocalypse.

The Doomsday Clock wasn’t – and still isn’t – a precise countdown to the end of all things. It’s a metaphor for how dangerous the global situation seems to be at a given moment, in the very well-informed but also subjective opinion of the Bulletin’s board of directors. In June 1947, things looked dire. The U.S. had dropped a pair of atomic bombs on Japan less than two years before; when the Bulletin of the Atomic Scientists first published the Doomsday Clock image, researchers were still studying the aftermath of those bombs. Meanwhile, the Soviet Union was hard at work on its own atomic program, and was just a couple of years away from testing its first atomic bomb in 1949.

Through the Cold War and in the decades since, the clock’s minute hand has moved about two dozen times. In September 1953, it stood at two minutes to midnight, following Russia’s August 1953 hydrogen bomb test – which in turn had followed a U.S. hydrogen bomb test in November 1952. Those tests meant the two feuding superpowers each had much more powerful new weapons with which to destroy each other; the tests also heightened the sense of life-or-death competition that made it more likely that someone would decide to use those terrible new bombs.

The clock wouldn’t come that close to midnight again until January 2018, when the Bulletin of the Atomic Scientists again set the time to two minutes until midnight – this time largely in response to the rapidly growing problem of climate change.

At the moment, the clock stands at 100 seconds from midnight. The Bulletin’s board made that decision in January 2020, just before the Covid-19 pandemic swept the world.

“Humanity continues to face two simultaneous existential dangers—nuclear war and climate change—that are compounded by a threat multiplier, cyber-enabled information warfare, that undercuts society’s ability to respond,” they wrote in a statement. “The international security situation is dire, not just because these threats exist, but because world leaders have allowed the international political infrastructure for managing them to erode.”

So far, the clock hasn’t moved in response to the pandemic, but that’s not surprising. It can be a useful metaphor for policymakers, but it’s not a very agile or responsive one. The Bulletin’s board meets twice a year to estimate the current time, which means the clock doesn’t adjust quickly in response to individual events. They didn’t make an exception for the 1962 Cuban Missile Crisis, and they haven’t made one for Covid-19. On the other hand, it’s likely that the pandemic will play a role the next time the Bulletin’s board adjusts the clock – which should be coming up soon.

That all sounds pretty alarming – and the world is a very alarming place right now. But while the clock doesn’t respond to individual events, it does respond to large-scale social, political, and economic change. As I wrote in 2018, “every citizen, every consumer, and every voter has the power to help move the clock back.”

A Fast-Growing Site Taps An Urgent Need In The Pandemic: Helping Seniors Cross The Digital Divide

Got Thanksgiving Leftovers? Here Is What You Need...