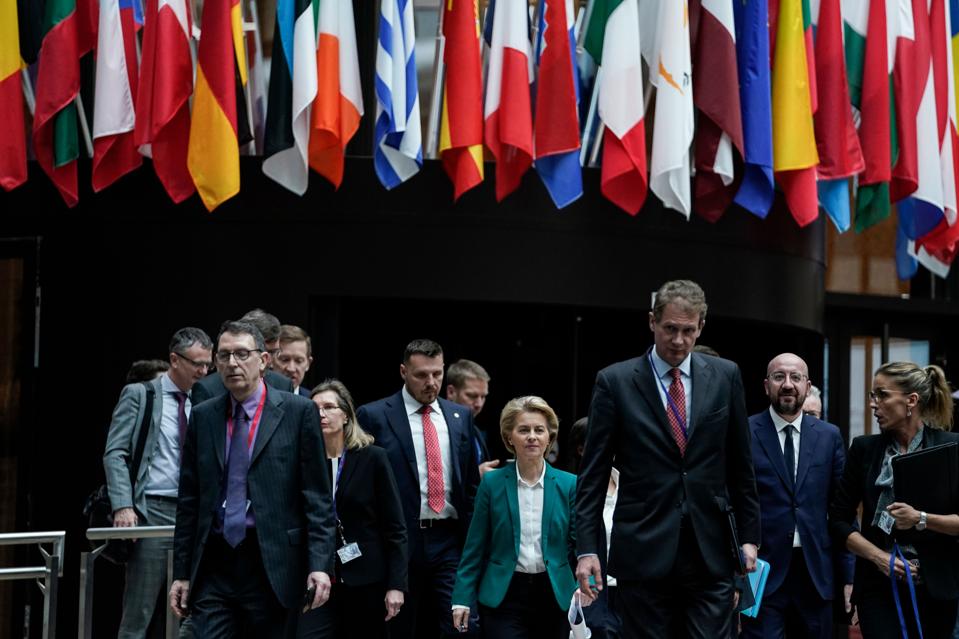 EU President of Council Charles Michel (2nd-R) and European Commission President Ursula von der … [+] Leyen (C) arrive to give a joint press conference after a G7 Leaders’ videoconference on COVID-19 at the EU headquarters in Brussels on March 16, 2020. – Ursula von der Leyen on March 16 proposed that the EU close its borders to non-essential travel, as Europe scrambles to fight the spread of the coronavirus disease. Charles Michel will official propose the measure at an EU leaders summit on March 17 that will be held by videoconference. That meeting will come one day after the G7 holds a similar high-level videoconference. (Photo by Kenzo TRIBOUILLARD / AFP) (Photo by KENZO TRIBOUILLARD/AFP via Getty Images)

The level of foreign direct investment (FDI) to the US is staggering. The Bureau of Economic Administration reports total inflow of $4.34 trillion for 2018. More than half of the investment comes from five countries: United Kingdom, Canada, Japan, Netherlands, and Luxembourg. Two-thirds of the total investment comes from Europe. China accounts for only 1% of FDI, though the level tripled from 2015 to 2016. Foreign investments went overwhelmingly to manufacturing (40%), followed by wholesale and retail trade (13%), and information technology (4%). While most investments are positive to the US, some entail a security risk. The US established the Committee on Foreign Investment in the United States (CFIUS) in 1975  to review the security implications of foreign investment.

The European Union boasts an even higher total FDI, some $5 trillion annually. The European Parliament notes a drastic change in the structure and source of FDI to the EU, with investment from China growing six-fold and the targeting of high-tech sectors by companies with state ownership or affiliation. Last year the European Parliament adopted the first EU-level tool to screen FDI for security, noting concerns about investment made by opaque, non-European state-owned companies into critical sectors and technologies. The FDI screening function has taken on heightened importance in the wake of COVID19. The European Commission issued subsequent guidance, urging member states to preserve EU companies and critical assets, such as health, medical research, biotechnology and infrastructures that are essential for security and public order, without undermining the EU’s general openness to foreign investment. 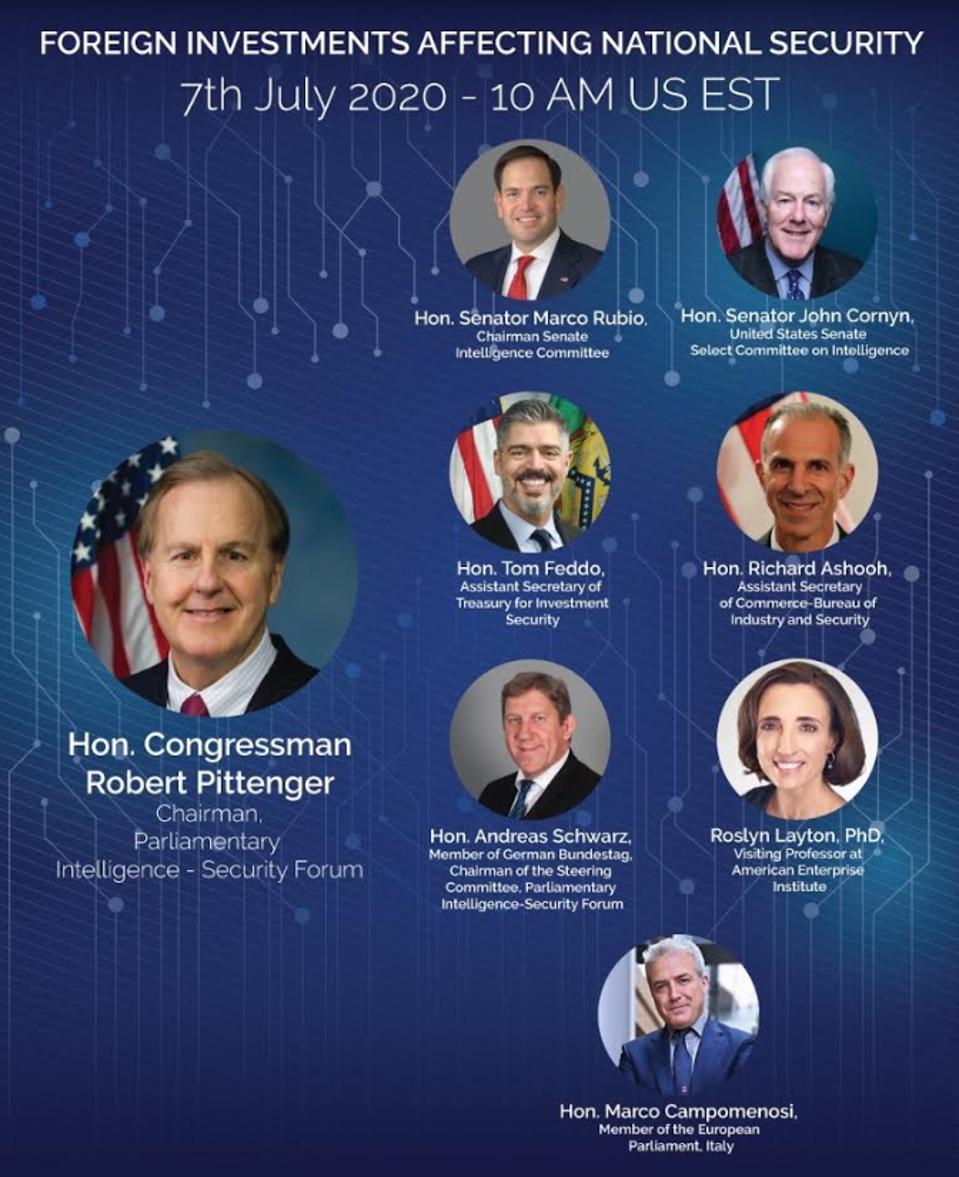 Mr. Feddo observed that foreign investment promotes economic growth, productivity, competition, and job creation, the benefits of which include more resources to invest in national security. A well-resourced and focused foreign investment review mechanism is important for any nation. The FIRRMA legislation preserves open investment while modernizing processes. It expands jurisdiction to targeted areas and fast-tracks review for transactions for sensitive. In the past, participation in CFIUS was voluntary. Now certain kinds of transaction entail mandatory review, such as when a foreign government takes a major interest in a US asset and when critical technologies are play. As I noted in my recent whitepaper co-authored with Mr. Pittenger, CFIUS’ Growing Power to Protect American Security from China Tech Threats: Examining TikTok and Lenovo”, FIRRMA now requires review of cybersecurity and personal data implications of foreign investment.

Such informational risks are paramount in the current pandemic as Americans use information technology networks to work, learn, and receive healthcare online, a situation that strategic and adversarial competitors could exploit. Indeed, fledging US companies which are also struggling under the current financial crisis are targets for malicious foreign investment.

Fortunately, CFIUS has stepped up to meet the national security challenge, with some 230 investigations since the FIRRA reforms took effect, almost a doubling of the annual caseload before FIRRMA. This has been bolstered by enhanced staffing and IT resources.

Mr. Feddo described an important part of CFIUS’ mandate which is to work with allies, and international engagement has a dedicated office within CFIUS. Under the current administration, CFIUS has interacted 250 times with some 50 counterparts around the world to share best practices. Indeed investment security has its own track among the discussion of the G7 nations (in addition to US, Canada, France, Germany, Italy, Japan, the United Kingdom). Protecting economic security while promoting economic growth is paramount.

1.      The mechanism should be focused solely on National Security.

2.      The mechanism must apply broadly and be cross sector. It should not be limited to defense applications. Indeed. startups could be key to future military advantage.

3.      The mechanism must identify and analyze the appropriate transactions.

4.      The mechanism must have authority to address transactions through mitigation, and if needed blocking or divestment.

5.      The mechanism must monitor and enforce conditions.

6.      The mechanism must maintain of confidentiality of the parties.

8.      The mechanism should adapt to new environments and challenges.

He noted that while different systems can work, they must be bound by the rule of law and have substantive measures. 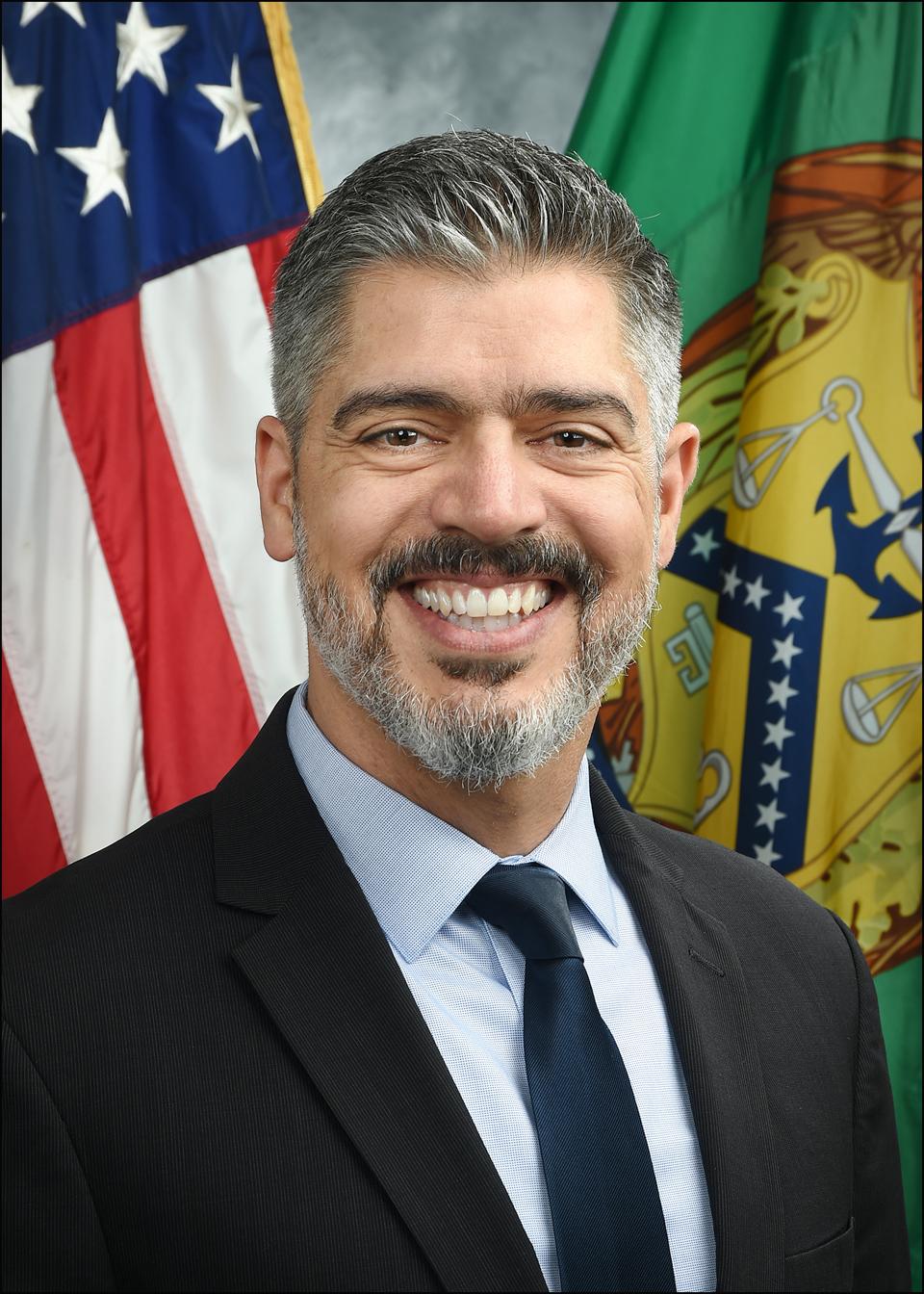 Apple Reveals How Its Best Security Feature Could...

UFC On TV Tonight: How To Watch Eye-Calvillo...