8 Space Missions That Ended In The Last Decade

This has been an incredible decade for space exploration. From telescopes trained on distant stars to Earth observation satellites monitoring our own world, and from Mercury to the distant reaches of our solar system, numerous missions have come to an end over the last 10 years. Here’s a look: 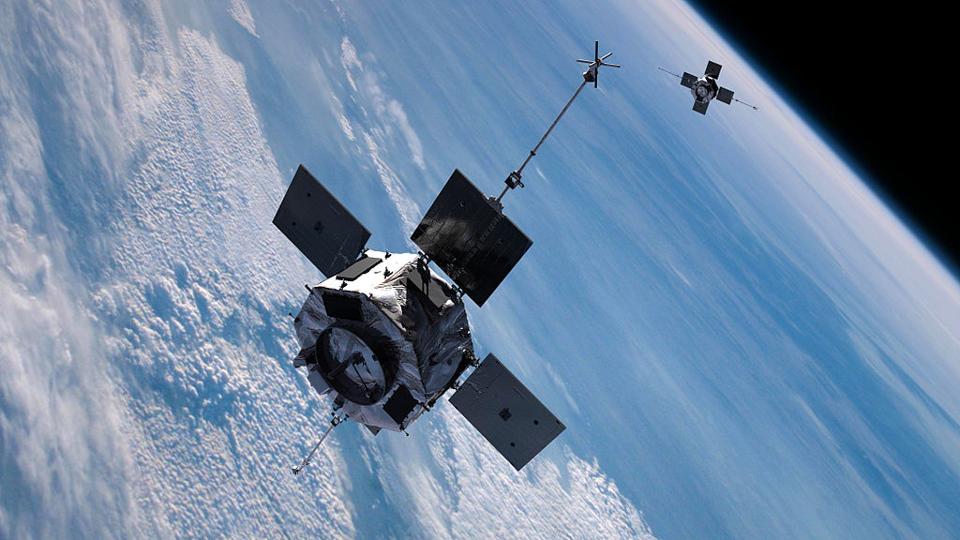 This artist’s conception shows the Van Allen Probes in orbit around Earth.

NASA engineers only expected the probes’ electronics to last 2 years in the harsh radiation environment of the Van Allen Belts (regions of charged particles from solar wind, trapped by Earth’s gravity), but the mission stretched to 7 years and only ended because the probes ran out of fuel earlier in 2019. During that time, they gathered data on the radiation in the Van Allen Belts and how it changes with solar activity. That data will eventually help plan for future solar storms and design spacecraft which can survive intense radiation in deep space. Engineers deactivated the first probe in July and the second in October – but they’ll both keep orbiting until sometime in the 2030s, when their orbits decay into twin fiery atmospheric re-entries. 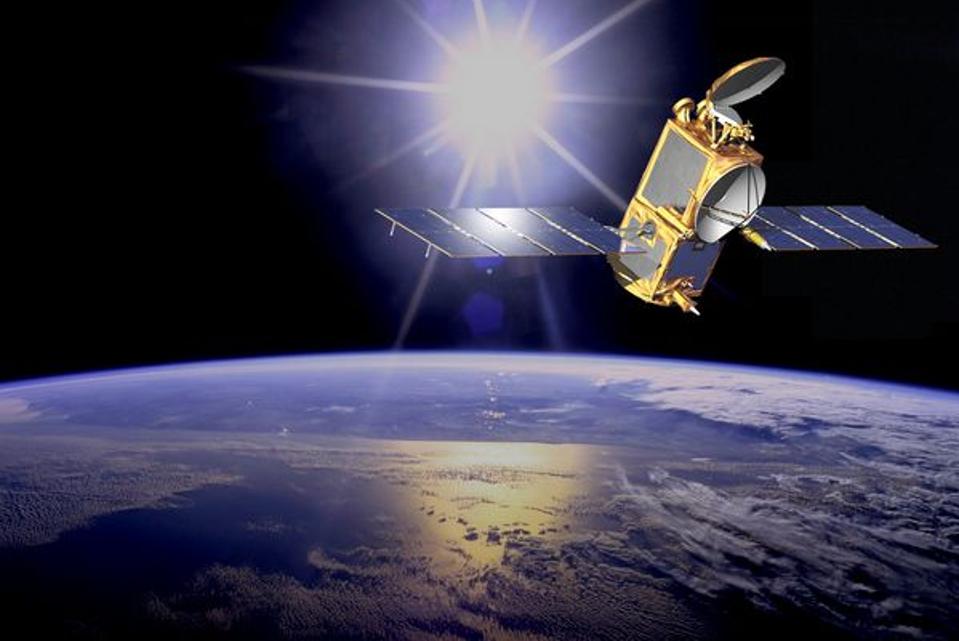 OSTM used one instrument to measure the distance from the satellite to the ocean surface, and … [+] another to measure how water vapor in the atmosphere might distort that measurement.

From orbit about 1,300 kilometers (820 miles) above the planet, Jason-2 used radar to measure the height of the ocean’s surface. The satellite’s radar altimeter measured the distance between the water and the satellite with remarkably precision — pinpointing the distance to within a few centimeters across a distance of 1,300 km. That data helped measure global sea level rise: about 5 cm (2 inches) over the course of the mission. It also helped monitor ocean temperatures and currents, which contributed to better hurricane forecasting. The mission was a joint effort between NASA and the French Space Agency.

-, SPACE: In this NASA image released 26 January, 2004 the side of a crater surrounding the Mars … [+] Exploration Rover Opportunity at Meridiani Planum on Mars can be seen. This is the darkest landing site ever visited by a spacecraft on Mars. The edge of the crater is approximately 10 meters (30 feet) from the rover. This color image is from the rover’s panoramic camera. AFP PHOTO/NASA/JPL (Photo credit should read NASA/JPL/AFP via Getty Images)

The rovers Spirit and Opportunity landed about 10,000 km apart on the surface of Mars in 2004. Spirit explored the basalt plains and Columbia Hills of Gusev Crater until 2010, when it got stuck in the sand with its solar panels pointed in the wrong direction to charge properly. Opportunity kept rolling across Meridiani Planum until a dust storm covered its solar panels in late 2018, leaving the rover without enough power to move, communicate, or – probably – keep its instruments warm enough to prevent damage. NASA tried to contact the rover for several months, but finally gave up in early 2019. 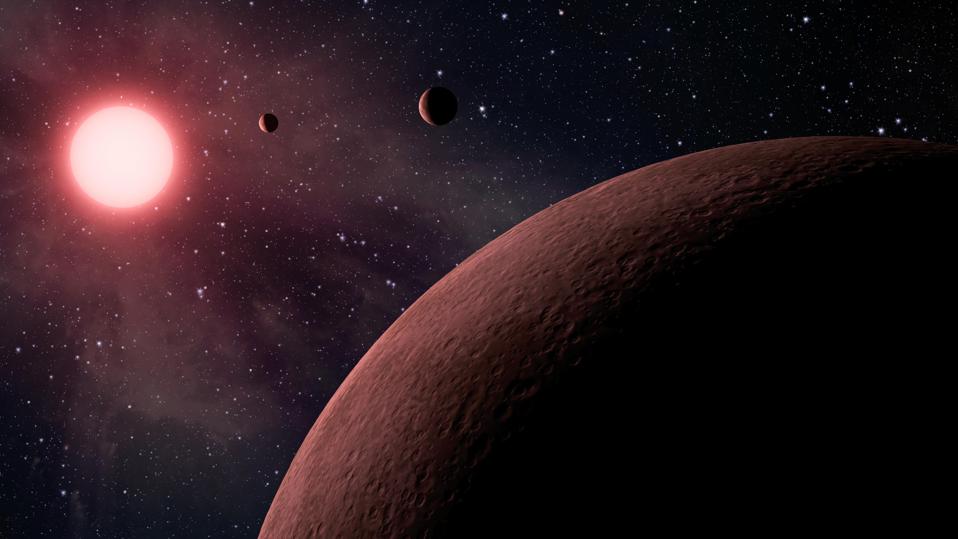 This artist rendering provided by NASA/JPL-Caltech shows some of the 219 new planet candidates, 10 … [+] of which are near-Earth size and in the habitable zone of their star identified by NASA’s Kepler space telescope. NASA says its planet-hunting telescope has found 10 new planets outside our solar system that are likely the right size and temperature to potentially have life on them. As the Kepler telescope finished its main mission, NASA announced Monday that it has seen a total of 49 planets in the “Goldilocks Zone” for possible life. And they only looked in a tiny part of the galaxy. (NASA/JPL-Caltech via AP)

NASA’s planet-finding Kepler Space Telescope discovered thousands of planets orbiting other stars during its 9.5-year-mission. The telescope’s extended mission came to an end in late October, 2018 when the telescope ran out of the hydrazine fuel that kept it pointed in the right direction. NASA engineers spent another two weeks downloading data from the telescope before they switched off its radar transmitter, leaving it to stargaze in solitude. 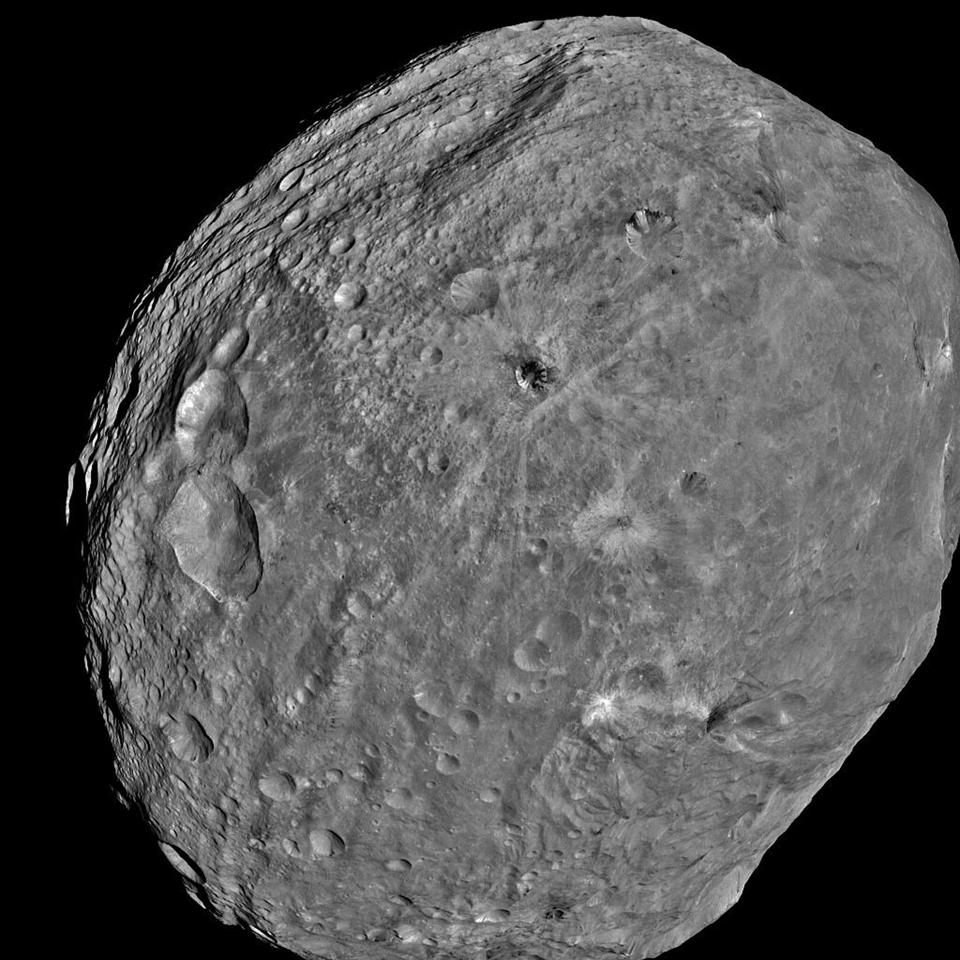 IN SPACE JULY 24: In this handout from NASA, the giant asteroid Vesta is seen in an image taken … [+] from the NASA Dawn spacecraft about 3,200 miles above the surface July 24, 2011 in Space. The Dawn spacecraft slipped into orbit around the asteroid on July 15, and for the next year will gather pictures and information. It will then travel to the asteroid Ceres, arriving in 2015. (Photo by NASA/JPL-Caltec via Getty Images)

NASA’s Dawn spacecraft gave us our first close look at the largest objects in the asteroid belt, the protoplanet Vesta and the dwarf planet Ceres. Its thrusters use electricity to accelerate ions out the back end of the spacecraft, and those ion thrusters let Dawn stretch its fuel supply enough to actually orbit Vesta and Ceres instead of just flying past them at close range. But it also used more conventional hydrazine thrusters for fine maneuvers, and their fuel eventually ran out – leaving Dawn dead in orbit around Ceres. 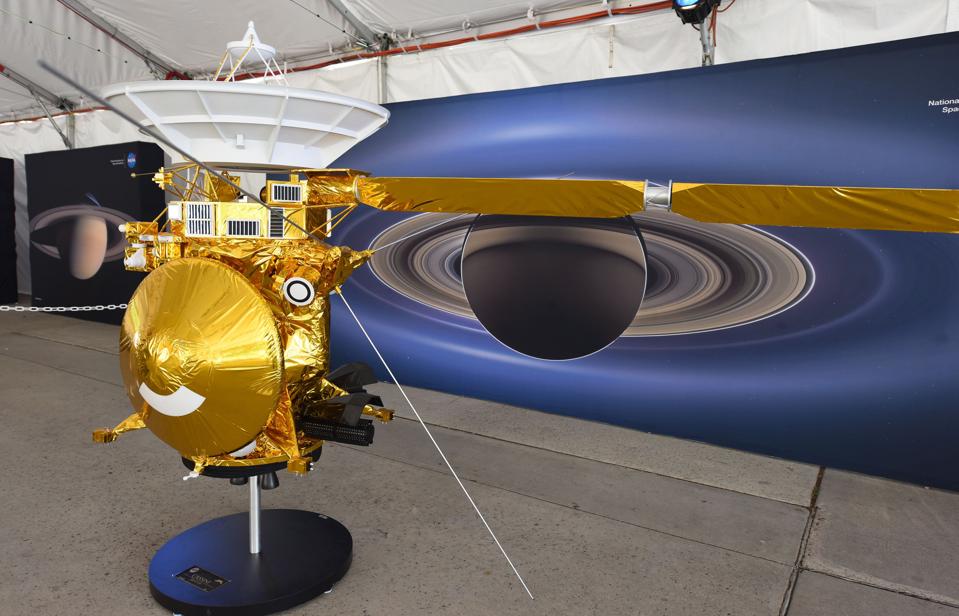 A model of the Cassini spacecraft is seen at NASA’s Jet Propulsion Laboratory (JPL) September 13, … [+] 2017 in Pasadena, California. Cassini’s 20-year mission to study Saturn will end on September 15, 2017 when the spacecraft burns up after intentionally plunging in the ringed planet’s atmosphere in what NASA is calling “The Grand Finale.” / AFP PHOTO / Robyn Beck (Photo credit should read ROBYN BECK/AFP via Getty Images)

NASA’s Cassini spacecraft revealed Saturn and its complex system of rings and moons in glorious detail. Just after arriving in Saturn’s orbit in late 2004, it deployed the Huygens lander to the surface of Saturn’s moon Titan, giving us our first glimpse of icy shores and liquid methane lakes. Over the next decade, Cassini mapped those methane seas in more detail, monitored the formation of Saturn’s massive storms, and discovered plumes of water erupting from the surface of Enceladus. In its final weeks, Cassini made several daring dives through Saturn’s rings before finally plunging into the gas giant’s upper atmosphere. 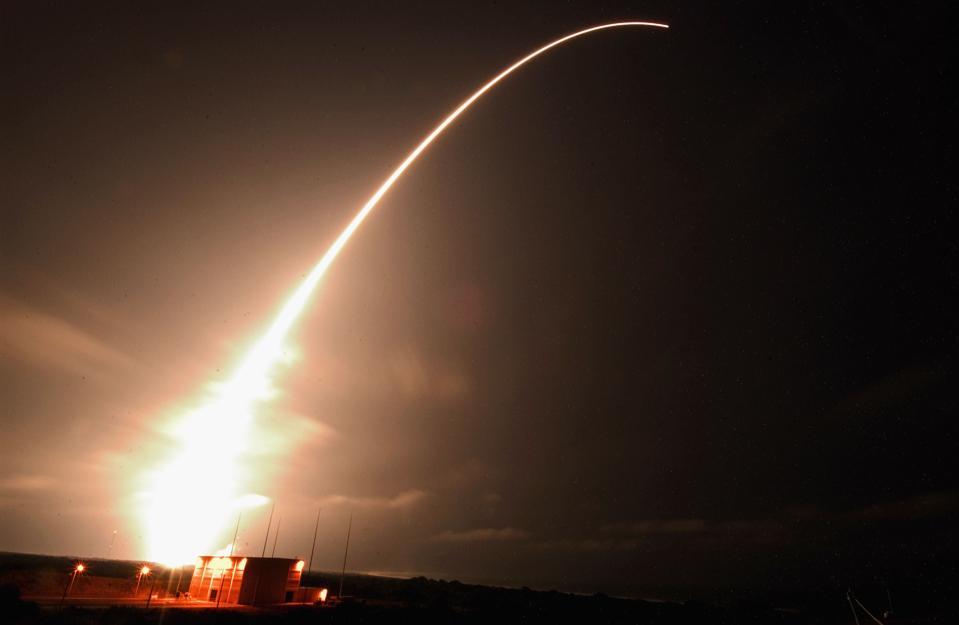 CAPE CANAVERAL, FL – AUGUST 3: A Delta II rocket carrying NASA’s new Messenger spacecraft lifts off … [+] from launch pad 17B August 3, 2004 in Cape Canaveral, Florida. The launch had been postponed 24 hours due to weather conditions. The Messenger spacecraft is expected to travel on an eight-year journey to Mercury, which may reveal more about our solar system’s innermost planet than has ever been known. The $426 million mission is being managed for NASA by the Johns Hopkins University Applied Physics Lab. (Photo by Matt Stroshane/Getty Images)

Mercury looks like a simple Sun-scorched ball of rock, but the first spacecraft to orbit the innermost planet discovered that it’s a surprisingly complex place. Messenger discovered water ice sheltered in the permanent shadow of the planet’s deepest polar craters, evidence of ancient volcanic eruptions, and a strangely offset magnetic field. The spacecraft helped map the surface of Mercury in great detail, estimate the planet’s mass, and measure how quickly its surprisingly water-rich exosphere was giving way to the solar wind. Years from now, future missions will study Messenger’s newly-dug crater on the far side of Mercury to learn more about space weathering. 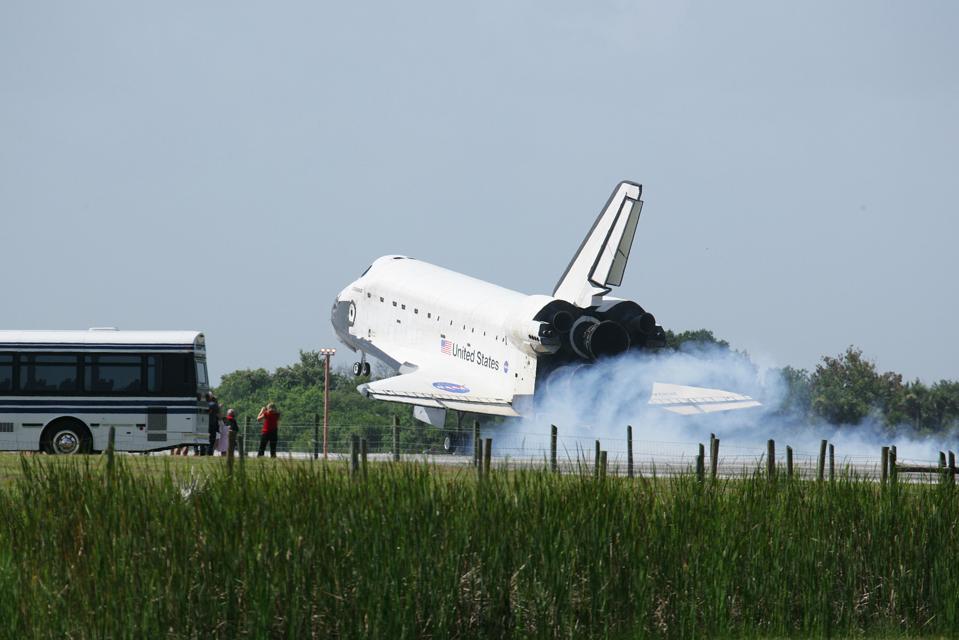 From the first flight of Columbia in 1981, NASA’s 6 space shuttles flew a total of 135 missions. The shuttles carried the Hubble Space Telescope into orbit, returned with the instrument that saved the mission from a fatal flaw in the telescope’s mirror, and maintained Hubble for years; they launched several modules of the International Space Station and the astronauts to help assemble them; and they flew thousands of science experiments into low Earth orbit. Space shuttles carried the first African-American astronaut, the first female astronaut, and the first Hispanic astronaut into space. The program endured the tragic loss of Challenger during its launch in 1986, but after the loss of Columbia during re-entry in 2003, the political will to maintain the program ran out. Atlantis returned from its final mission on July 21, 2011, and NASA hasn’t launched its own crewed spacecraft since.

3 (Not So Obvious) Industries That Could Be...