Breaking
Best Incentive To Get Vaccinated: Money, Messaging, Or...
Page Level Query Analysis at Scale with Google...
How A CIO Can Align IT With Business...
Blogger of the Month: Jo, Girl Eats World
6 Things Women In Business Know That Men...
How to Use First-Party Data for Ad Personalization
Pressing Reset—Putting A Fallen Unicorn Back On Its...
How We Went Viral: Promoting Content with Influencers,...
Blame Olympic Record Price Tag For Return To...
Apple iOS 14.5 Release: Should You Upgrade?
Why Gaming Gear Company Razer Launched A $50...
Technical SEO Implementations to Increase the Impact of...
30 Brilliant Ways to Market Your Eco-Friendly Shopify...
15 Tech Industry Leaders Share Overused (And Misused)...
How to Use Amazon Posts to Promote Your...
U.S. House Passes Bill To Create First Crypto...
Home Business 91% Of Us Hate Being Forced To Install Apps To Do Business, Costing Brands Billions
Business

91% Of Us Hate Being Forced To Install Apps To Do Business, Costing Brands Billions 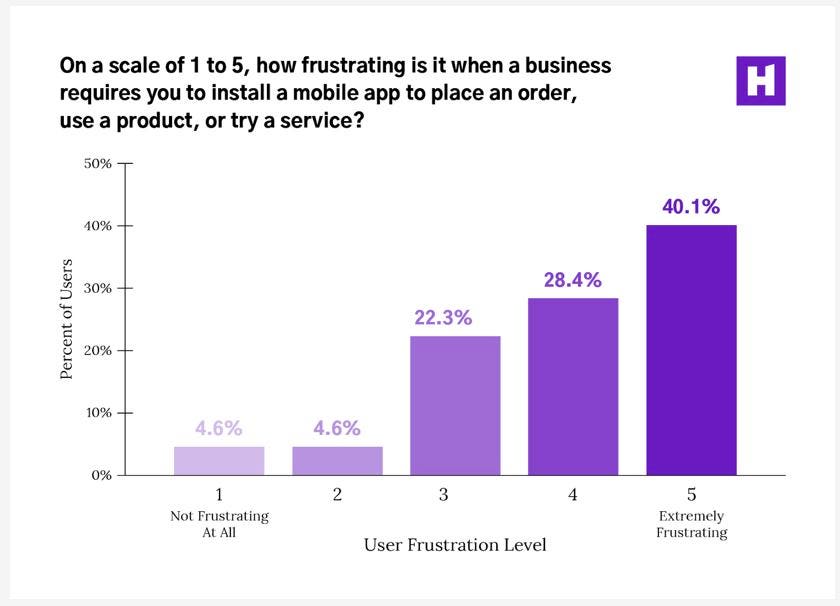 Most of hate being forced to install apps to do business with a company. But almost half of us still do, according to recent survey results released by a mobile consultancy, Heady.io.

Companies love making an app install a key part of doing business with them. Step one in many smart connected products’ set-up is generally “install our app.” And some companies require you to install their app to buy from them or access service.

Men don’t like it either, being slightly more likely to rate their frustration at a four or five. But women are 20% more likely to go straight to five, indicating that they find that kind of business practice “extremely frustrating.”

But according to Heady’s research, most of us still just suck it up:

That’s good news for brands, in a sense: they get what they want in at least half of cases. And, since the ones who actually install the app are more likely to be invested in becoming paying customers or engaged users, brands could see the app install step as a forcing function to separate lookie-loos from serious customers. It’s also bad news, however. Not only do they miss out on a significant number of potential customers by placing a barrier in their path, they’ve also pre-angered eventual customers, who might now be more easily triggered by any additional stumbling blocks or friction in their customer journeys.

From a customer perspective, however, it’s just plain annoying: most of us want what we want when we want it … and we also want it the way we want it.

Forcing us to jump through hoops is risky from a brand perspective, therefore.

It’s understandable, of course: a mere mobile web visit may or may not result in any action. But a brand that gets an app install gets a window into consumer’s lives. Depending on the permissions you grant an app, brands can message you, see where you are, target communications and app experiences to you based on other data they have, and more.

Essentially, they’re walking around with you in your pocket.

Which is a valuable thing, of course.

But it also comes with dangers. The friction for consumers is real. And almost 80% of us have abandoned transactions in the last year because a brand wanted to force us to install their app in order to do business with them.

Interestingly, the younger we are, the more likely we are to give a brand the middle finger for requiring an app install. 87.1% of people from 18-24 have abandoned purchases for being required to install an app, compared to just under 70% for people in the 55 and over age category.

“77.9% of mobile phone users say the mandatory app installation roadblock caused them to abandon at least one transaction in the last year,” says Khosla. “Younger users are progressively more likely to abandon transactions if required to install an app to make a purchase, complete a sale or try a service.”

Perhaps: older people feel “that’s just how they do business,” whereas younger people are aware that services can be delivered over the web as well … and that apps have privacy implications.

One solution that Heady.io mentions, by the way:

App Clips, which are Apple’s answer to Android’s instant apps. App Clips are tiny single-use apps that you can install and use instantly, just like a web page or web app, without leaving context, going to the App Store, installing an app, then finding it, opening it, going through a first-user experience, and finally doing what you wanted to do 10 minutes ago.

That makes sense, as do Instant Apps on Android, which Google hasn’t made much noise about lately, but still exist and are still available.

One good thing about apps being required for purchase?

Average that out over hundreds of millions of consumers, and it adds up to billions of dollars in lost revenue — from a brand’s perspective — very quickly.