Breaking
The 5 Biggest Mistakes Companies Make With Chatbots
Weird Market Dynamics: 3 Reasons Ethereum Is Dropping...
Silver Shines, Says Citi, Tipping A 60% Price...
Report: Lawyers Unable To Locate Parents Of 545...
In Need Of A Competitive Edge? Look To...
Think Small: Timely Picks To Capture The Reawakening...
Patient Gets Covid-19 Swab Lodged In Her Lung...
Nine Signs You’re Not Being Effective During Your...
Chromebooks Can Now Run Windows 10 – Find...
Will Biden’s Tax/Benefit Plans Help/Hurt You And The...
This Fashion Brand Turned A Stripe Into A...
On CRM: Salesforce Has Finally Fixed Your CRM...
Shots In The Dark: Why Access To A...
The Case For A Better ROI From Virtual...
What Building Wealth Really Takes In Business
Building A Circular Economy In New York City...
Home Technology A Bright Comet With A Tail Could Adorn Twilight Just As The Coronavirus Epidemic Peaks
Technology 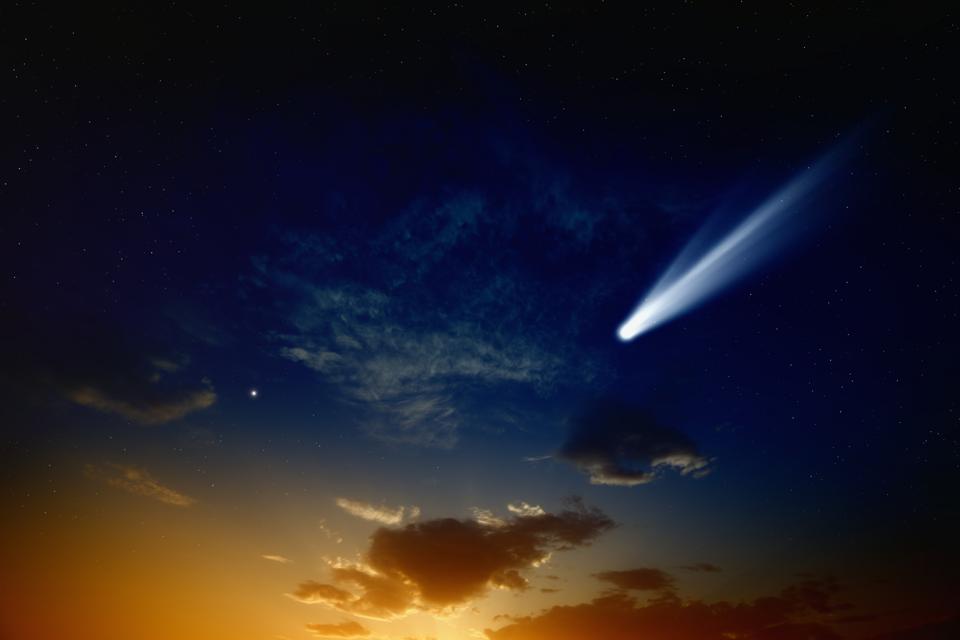 An illustration of a bright comet close to a sunset.

“Comet Atlas” is getting a tail.

Could it be that we’re about to get a bright comet, visible to the naked eye to everyone in the northern hemisphere, just as the coronavirus pandemic reaches its peak?

Currently visible through binoculars and telescopes as it travels through the northern circumpolar constellations of Ursa Major (the Big Dipper/Plough) and Camelopardalis (the Giraffe), Comet Atlas—officially known as C/2019 Y4 (ATLAS)—appears to be getting a tail.

Could it be the brightest comet for over 20 years?

This new image is by Damian Peach, a noted planetary photographer from the U.K. It shows a very obvious greenish coma and tail. Comet tails are dust and gas that get illuminated by the sun as the comet gets closer. Comet coma are the nebulosity around around the nucleus of a comet that gives it a fuzzy look.

So a comet is just beautiful space dust, not a portent of doom!

This sequence, shot on March 30, shows Comet Atlas’ movement over five hours as it moves from one constellation to another. You can clearly see its tail as it grows brighter in the northern hemisphere’s night skies.

Comet Atlas was featured on NASA’s Astronomy Picture of the Day in late March 2020 as it appeared close to galaxies M81 and M82 (the Cigar Galaxy).

Comet Atlas was discovered by the NASA-funded ATLAS (Asteroid Terrestrial-impact Last Alert System) survey on December 28, 2019, in Hawaii. It was the last comet discovered in 2019.

The movement of Comet Atlas through the night sky in the coming months.

How and when to see Comet Atlas

The trajectory of Comet Atlas is currently taking it away from the Big Dipper/Plough. It’s likely to be at its brightest and best around the end of April/beginning of May when it gets closer to the Sun (it’s at its perihelion closest-to-sun point on May 31, 2020). On April 30, 2020 it will be in the constellation of Camelopardalis and best seen just after sunset, in the western twilight sky. You can see it now with any telescope if you use this sky chart. 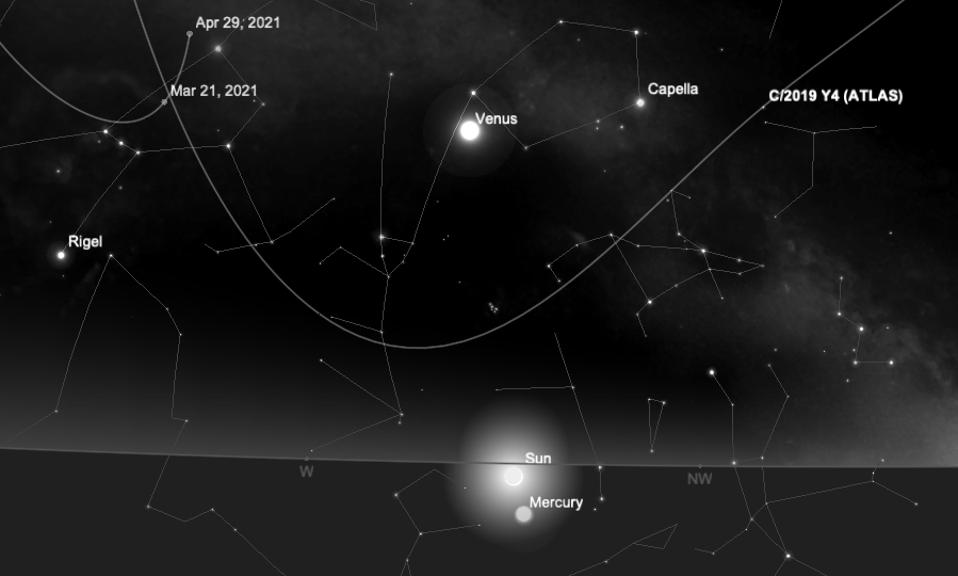 Comet Atlas could be easiest to se on April 30 (chart shows sunset in northern hemisphere).

When will Comet Atlas be easiest to see?

On April 30 Comet Atlas will be relatively easy to find by first locating the bright planet Venus and bright star Capella in the constellation of Auriga. You’ll probably need binoculars … though if we all get lucky then it may be bright enough to see with your naked eyes.