Breaking
Lights, Camera, Action—Is There A Post-Covid Future For...
7 Ways to Reduce Human Errors in Your...
How ‘Couples Therapy’ Used Technology To Cope With...
Can You Settle Your Student Loans Or Negotiate...
How to Use Amazon Attribution For Ad Campaigns
What are the Makings of a High-Quality Link?
How To Quickly Start And Scale Your Business
Terra Virtua: What NFTs Can Teach Us About...
5 Easy Steps To Prepare Content For E-A-T...
Physical Inactivity Linked To More Severe Covid-19 Infection...
The 2021 Estimated Tax Dilemma: What Tax-Return Pros...
Want To Digitally Transform Your Business? Start With...
How to Optimize Google My Business and Leverage...
Debunking Link Building Myths in 2021
How, When And Where You Can Gaze At...
SBA Opens $16.2 Billion Shuttered Venue Operators Grants...
Home Technology A Cautionary Tale About Social Distancing For St. Patrick’s Day And Every Day
Technology

A Cautionary Tale About Social Distancing For St. Patrick’s Day And Every Day 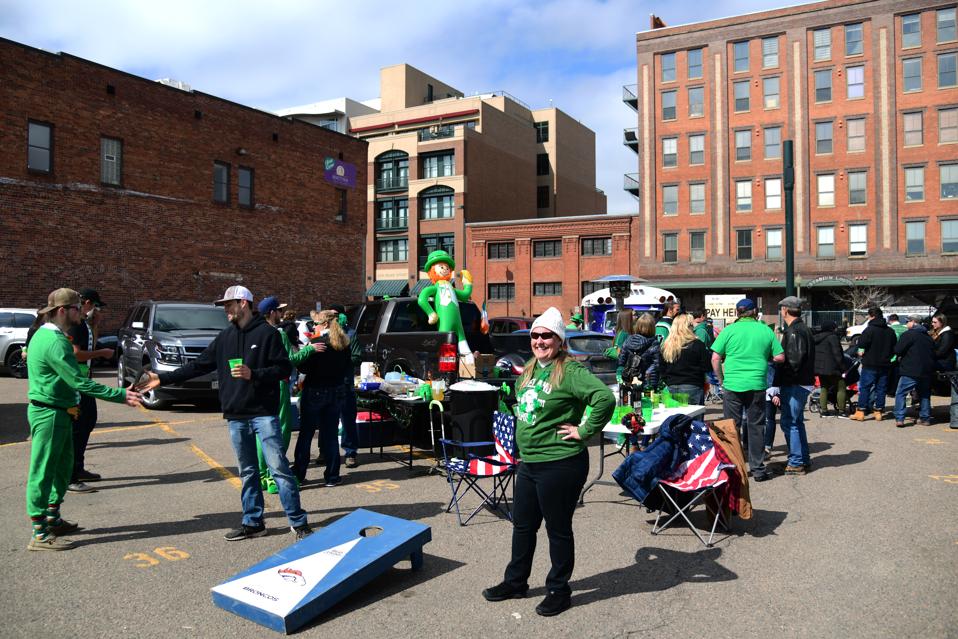 DENVER, CO – MARCH 14: Because of the cancelation of Denver’s St. Patricks Day parade, Kelly Mahoney … [+] of Denver, front, and about couple of dozens people are celebrating St. Patricks Day at the empty parking of Lower Downtown in Denver, Colorado on Saturday. March 14, 2020. Denver city leaders canceled the annual St. Patrick”u2019s Day Parade because of the coronavirus. (Photo by Hyoung Chang/MediaNews Group/The Denver Post via Getty Images)

Today, nearly all public events have been cancelled, but a century ago, with the U.S. in the midst of another pandemic — the 1918 flu — some cities insisted on holding parades. Not shockingly, it didn’t end well.

In September 1918, World War I was coming to an end, but the U.S. government still needed money to fund the last big military push, so it was selling war bonds. Cities around the country held bond drives and parades to convince people to buy the bonds. The so-called “Spanish Flu” had swept through the country in the spring, but by summer, it seemed the outbreak was over; then, in the early fall, a second wave of cases began to turn up, and it looked like this wave was going to be much bigger and much worse than the first one. In Philadelphia, no civilians were sick, but soldiers and sailors at nearby military bases, especially the Philadelphia Navy Yard, were already dying.

St. Louis had already cancelled its parade, because public health officials worried that the flu would spread like wildfire in the packed crowds of spectators (just over a century later, that news sounds awfully familiar). But in Philadelphia, the city’s public health director William Krusen didn’t want to cancel the Liberty Loan parade. Krusen worried about causing a panic over what he had already dismissed as “old-fashioned influenza or grip” (something else which sounds a bit too familiar in 2020).

Philadelphia’s city government was also under pressure from the federal government to meet a quota for war bond sales, and at the time, that seemed more urgent than the specter of a pandemic.

On September 28, about 200,000 people packed themselves into a 2-mile stretch of the city’s Broad Street to watch the parade of floats and marching bands led by John Philip Sousa himself. The first flu cases showed up two days later. By the end of the third day, flu patients filled every bed in every hospital in Philadelphia, and by the end of the week, 2,600 people had died.

The city announced a lockdown on October 3, similar to the measures many U.S. cities have implemented in the last few days. In response, the Philadelphia Enquirer observed, “The authorities seem to be daft. What are they trying to do – scare everybody to death?” More than 12,000 people in Philadelphia died of the flu over the next several weeks.

That’s why most concerts, parades, and other events have been cancelled. But COVID-19 can still spread dangerously fast in crowded bars, clubs, restaurants, and other venues – and that’s why the CDC and other public health experts are urging people to stay home – even if it’s St. Patrick’s Day, even if it’s been a rough week, and even if you want to prove you’re not afraid. In 1918, Krusen wanted to prove he wasn’t afraid, and 12,000 people died.

Meanwhile, in St. Louis, where the parade had been cancelled, only about 700 people died of the flu. Keeping people home did save thousands of lives in St. Louis, while people gathering in large numbers cost thousands of lives in Philadelphia. A century later, historian and author Kenneth C. Davis wrote that the anniversary of the end of World War I offered “a good moment to remember the damaging costs of shortsighted medical decisions shaped by politics during a pandemic that was more deadly than war.”