A Change In Formation But Similar Frustration; Now Newcastle United Must Focus On The Cup 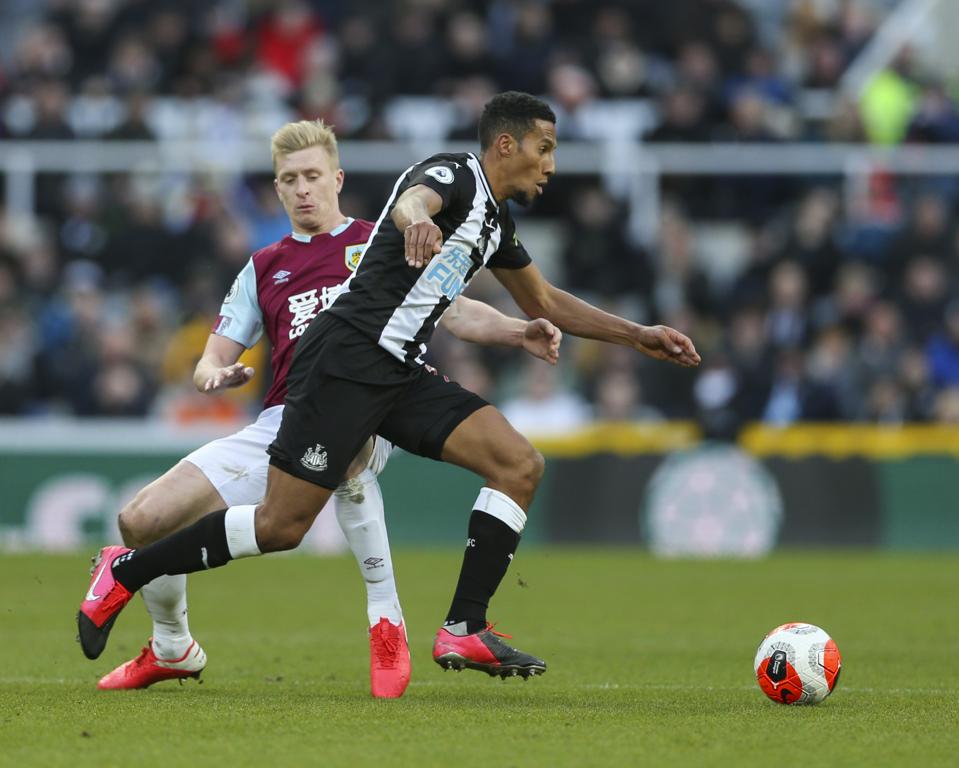 Newcastle United spent their extra day as they have every other; huffing, puffing and struggling. The leap day didn’t offer the fresh start or new impetus Steve Bruce hoped it would when he named his team to face Burnley at St James’ Park on Saturday afternoon; he changed formation, as he had long suggested he would, ditching the 5-2-3 system and replacing it with 4-2-3-1. There were also five differences in personnel to the 1-0 defeat at Crystal Palace, including dropping Allan Saint-Maximin to the bench, Joelinton on the left wing and Dwight Gayle up front. It was all in the name of scoring more goals, but the Magpies were predictably poor when the chances came along. Instead of ending the wait for a mark against their name, they took it to four games, and six hours of football, with a 0-0 draw.

Saying goodbye to February, and the cold, dark winter, was never going to become a metaphor for springing life into the season. Newcastle are what they are, and what they’re not is very good at making things count in the opposition box. Bruce was right to take some positives from the game; his team had at least looked more threatening in their build up play, opening their in-form, and typically resolute opponents up to have 21 shots on goal; this was the best performance of the three stalemates seen on Tyneside this season, which isn’t saying much. Only four efforts put Nick Pope to the test, but at least there was evidence of a plan and a structure in place to get themselves where they needed to go. Burnley are hardly the most threatening team themselves; it was unlikely to be the most rigorous test for the new defensive set up, which Bruce admitted caused him concern, but the clean sheet was welcome after some shaky weeks. 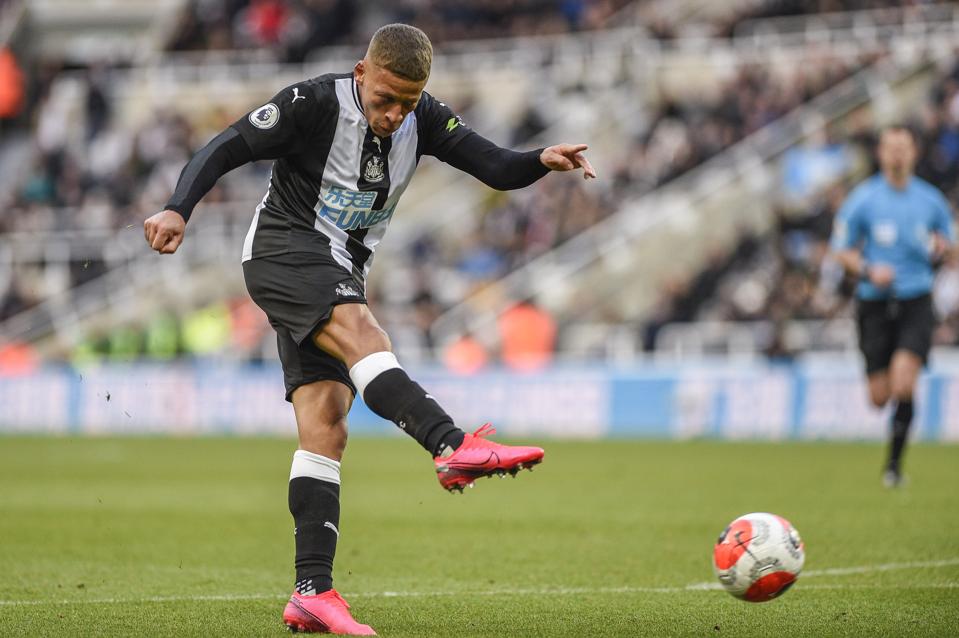 While the records won’t suggest this, it was good to see a more attacking force about Newcastle without Saint-Maximin, a talismanic figure with whom they’d won half their games when he’d started. Supporters could have been forgiven for scratching their heads when they saw that he was the man making way for Gayle and not Joelinton, but Bruce explained after the game that the Frenchman had been struggling with his hamstring in training on Thursday. With the FA Cup fifth round tie at West Bromwich Albion, the biggest game of the season in the eyes of many, right around the corner, there was logic in his stance. He came on for just under 15 minutes and couldn’t swing the game.

England boss Gareth Southgate was in the crowd and, provided he stayed awake long enough, he’ll have got what he came for. That was probably the same thing as Sean Dyche; to see Pope and James Tarkowski perform ahead of his next squad announcement later this month. What he didn’t get to see was a resurgence for Danny Rose, who despite much fanfare upon his arrival from Tottenham Hotspur in January, has looked short of fitness and intensity. Matt Ritchie needs to start games, because the aggressive nature of his play can be a hindrance when he enters the fray later on; it may be a good idea to go with him at fullback, behind a returning Saint-Maximin, at the Hawthorns on Tuesday.

Results elsewhere didn’t go to plan for Newcastle; Crystal Palace’s win may have meant a point was gained on Brighton and Hove Albion, but they were able to pull themselves further clear. Watford’s ending of Liverpool’s unbeaten run means the gap to the bottom three stands at just five points, while victories for West Ham United and Norwich City will have been a reality check. There were the first signs of progress; it was better than before, but still difficult to put forward an argument to suggest they did enough to win on Saturday. Burnley were in superb form heading into the game, and they grabbed an eleventh clean sheet; Newcastle had no divine right to take three points, but it was another cold reminder of the situation. Intent should be the basis of a performance worthy of praise, not worthy of praise itself. 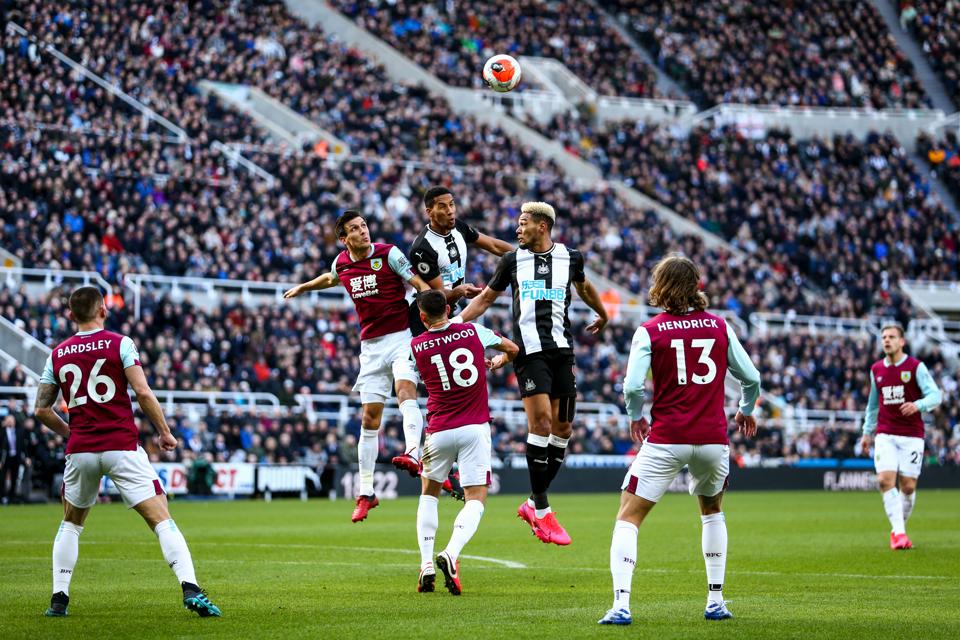 NEWCASTLE UPON TYNE, ENGLAND – FEBRUARY 29: Jack Cork of Burnley, Isaac Hayden and Joelinton of … [+] Newcastle United challenge for a header during the Premier League match between Newcastle United and Burnley FC at St. James Park on February 29, 2020 in Newcastle upon Tyne, United Kingdom. (Photo by Robbie Jay Barratt – AMA/Getty Images)

For all the angst and fear, there is something worth getting excited about this week. Around 5,000 fans will be making the trip to the West Midlands to see if Newcastle, already breaking new ground in the competition in the Mike Ashley era, can make it to the FA Cup quarter finals. Bruce has shown a desire to push on with team selections, and though both ties against League One opposition were forced into replays, there is an opportunity here. West Brom are battling for promotion in the Championship; this test will be a marked step up from those before, but there is a chance they won’t be fully focussed on the task in hand. That said, one win in ten games suggests Newcastle perhaps shouldn’t be, either.

The performance at the weekend was better, but not what is required; Joelinton continues to look at home on the left, in a more natural role and free of the burden wrongly bestowed upon him last summer, and Jonjo Shelvey’s reunion with Isaac Hayden made the midfield more proactive. Yet, still, the same issues are there; this is a team starved of belief going forward, unsure of how to progress themselves. A draw at home to a midtable side can never be celebrated; it must be critiqued and learned from in this case to avert the growing issue of a potential relegation, but there is no better way to build on it than with a big result in the cup this week.