Breaking
Google Meet’s Unlimited Calling Will Continue To Be...
The Need For Speed-Is Quantum Computing A Good...
Stock Market Crash: The End Game Approaches
Best Video Conferencing Software
For These Indigenous Artists “Land Back” Is Both...
The Current Tech Stock “Bubble” Reflects Pessimism, Not...
A Look At What’s Inside House Democrats’ New...
Page Authority 2.0: An Update on Testing and...
How Public Health Experts Are Harnessing The Power...
This Husband And Wife Built A Luxury Brand,...
This Husband & Wife Built A Luxury Brand,...
Luxury Footwear Brand Chelsea Paris Re-Launches And Stays...
The 30 Upgrade Module ‘Avengers’ Farm Trick You...
50 Years After Milton Friedman, Where Does Capitalism...
House Prices To Rise Through The Recession As...
Is An Internet Service Provider Revolution On The...
Home Finance A Commonsense View Of The Shape Of The Recovery
Finance

A Commonsense View Of The Shape Of The Recovery 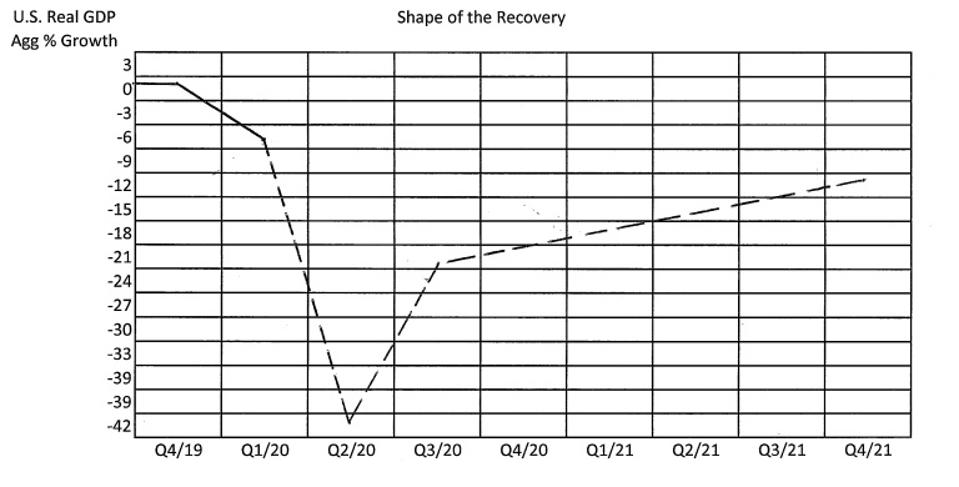 Because economies are reopening or partially opening in the U.S., the likely bottom of the Pandemic Recession will be this quarter. The debate is now over the shape of the Recovery. Letters have been used to describe what authors/economists/investment houses believe. “V” shaped is clearly what the equity bulls believe. Some describe it as a “U.” A “W” would occur if we had a second virus wave. Still others believe we will have an “L” shaped Recovery.

As economies reopen, there inevitably will be some snap-back; some people will go to the hair salon, and a few to dine-in restaurants. The initial upsurge will make some believe that, indeed, we are having a “V” shaped Recovery. But, there are too many things that have already happened, or can’t be stopped, that will cause a much shallower long-run recovery once the initial snap-back subsides. I thought about trying to describe this in words, and the best description I could come up with is a “modified square root sign.” That probably isn’t very meaningful for most, so I decided to draw it, which is what you see in the graph above. It depicts my view of the aggregate annualized percentage growth in GDP shown on a quarterly basis.

We know that U.S real GDP grew at an annual rate of 2.1% in Q4/19 and that the first cut at Q1/20 is -4.8%. Q2/20 will decline in the head-spinning -35% to -50% range, with -40% as the consensus. That’s what is depicted on the graph. Be aware that the graph is not intended to be a forecast, as we are currently in unchartered territory. It is meant to draw a picture of the likely shape of the Recovery. I chose -40% in Q2 (in the range of consensus) and -20% for Q3, as I assume a snap-back of half Q2’s fall. Don’t be fooled by the original snap-back, as the Recovery will be quite slow thereafter given the unemployment situation, consumer attitudes, the oncoming debt default tsunami, and the increased costs and regulatory restraints on businesses as they reopen. All of this is described in what follows.

Indeed, in the states that have allowed restaurants to reopen, like Georgia, Open Table indicates that reservations are only at 10% of February’s level.

Initial unemployment claims for the week ended May 1st were 3.2 million, lower than the prior week’s 3.8 million which was lower than that of the week before. Someone told me: “See, things are getting better…” to which I replied, “No! They are just getting worse at a slower pace!” The daily state claims are pointing to another 2.8 million initial claims for the week ended Friday, May 8th. That will total about 36 million newly unemployed over less than a two-month period. March’s “official” unemployment (U3) rate was 4.4%, and that “officially” rose to 14.7% in April as reported on Friday, May 8th. That’s what history will record. “See, not as bad as expected,” I’m told.

BLS reports the numbers as recorded by the survey takers. Similar to the March BLS report, this report was accompanied by a note that the survey takers misclassified many of those on “temporary” furlough as still employed instead of “unemployed.” BLS indicated that, had they been properly classified, U3 would have been nearly 5 percentage points higher, i.e., close to 20%. In addition, the Labor Force Participation Rate fell a record amount from 62.7% to 60.2%. This represents about 6 million people who just dropped out because “they weren’t looking.” (Note: If all the businesses were closed, where would one look?) Most of these people should also be counted to get to the true unemployment picture; and if we do count them, the U3 unemployment rate would balloon to nearly 24%.

If one reads the reopening regulations, at least in the state where I live, and if you are a small business owner and must abide by them, you must be pulling your hair out (if you have any left at this point). Spacing requirements in restaurants, hair salons unable to blow dry and no one allowed to be waiting in the shop; store occupancy limited to 50% of fire code; sanitation and cleansing rules at required intervals…

So, besides the consumer hesitancy documented in the surveys, business costs are going to rise, and worker productivity, which was already declining prior to the lockdowns, is going to sink like a stone dropped in a lake.

In the BLS employment report, 18 million of those that reported lost jobs said the loss was “temporary,” while 2 million said their job losses were “permanent.” There are several reputable economic units that have forecast that only 50% of February’s small businesses will be around this fall. ADP reported that in April, small business shed -6 million jobs. Counting March and what is coming in May, the count is likely much higher. But, let’s just use the 6 million. If half of small businesses don’t make it, 3 million of those jobs become permanently lost. (And, then, think of all the empty storefronts and what that means for the commercial real estate industry.)

It is also logical that, given the consumer sentiment outlined earlier, that it is unlikely that the leisure/hospitality, casino and airlines industries are going to be operating above 50% of February’s capacity anytime soon. That’s another -5 million whose “temporary” layoff status could well become “permanent.” True for the oil industry too, as the glut of oil has lowered prices making it unprofitable for many of America’s drillers/frackers.

Then there is the oncoming debt default tsunami.  The week ending May 8th saw notable retailers J. Crew and Neiman Marcus file bankruptcy. Many more are sure to follow. Such companies don’t keep a large percentage of their employees as, even under Chapter 11 reorganization, many of their stores/branches will close, and staffs at the stores that continue to operate are pared back.

So, of the 36 million newly unemployed since mid-March (and more unemployed likely in future weeks), it is easy to conclude that at least 15 million simply won’t be called back. That alone leaves a residual 10% unemployment rate. And, for many of the lower paid wage earners, especially in the leisure/hospitality industries, the extra $600/week for the 27 weeks of covered unemployment is an incentive not to return.

Surveys show that consumers are hesitant to resume their old consumption patterns;

The hole to fill is huge, and it appears that it will take more than a couple years, even with optimistic assumptions. For equities, it seems foolish to believe that corporate earnings are going back to pre-virus levels anytime soon. Unemployment will be the number one social issue for the foreseeable future. Consumer hesitancy will keep consumption levels low, as will the need to save.

Given what I have outlined here, for investors, “looking” past 2020 with the view that 2021 will be a continuation of 2019 (especially if we get a vaccine) just doesn’t make sense. Eventually, the financial markets will wake up and recognize that fundamental change has occurred, that a return of the 2019 full employment economy isn’t anywhere in sight, that corporate profits will be harder to achieve, and that the market price support of the corporate buy-back will likely be a historical artifact, relegated to discussion in college finance classes.

What Does Forever Look Like? Facilitative Leadership Shows The Way