Breaking
6 Tools To Bring Your Virtual Conferences To...
COVID-19 And The Future Of Aging: Prospects For...
Harman’s New Citation MutiBeam 700 Is A Feature-Packed...
Is Your Business Stagnant? It Might Be Time...
IRS Releases Draft 1040 Instructions Adding Clarity To...
Pandemic-Inspired Sales Of Telescopes Are Surging. Here’s The...
Lee Kun-Hee, Legendary Head Of Samsung And Korea’s...
Has Facebook Finally Broken WhatsApp—Radical New Update Now...
Has Facebook Suddenly Broken WhatsApp?
How to Work With a Consultant: The Ultimate...
Nuance CEO Mark Benjamin: The Trials And Triumphs...
PS5 And Xbox Series X-Friendly AV Receivers Reportedly...
‘Double-Digit’ Growth Could Boost Edwards Lifesciences Stock
Three Charts Show A K-Shaped Recovery
How Propel And Vote.org Helped Register 60,000 SNAP...
‘Fortnite’: Here’s A Code For The Free ‘Wrath’s...
Home Technology A Crescent Moon Puts On A Show With The ‘Evening Star’: What You Can See In The Night Sky This Week
Technology

A Crescent Moon Puts On A Show With The ‘Evening Star’: What You Can See In The Night Sky This Week 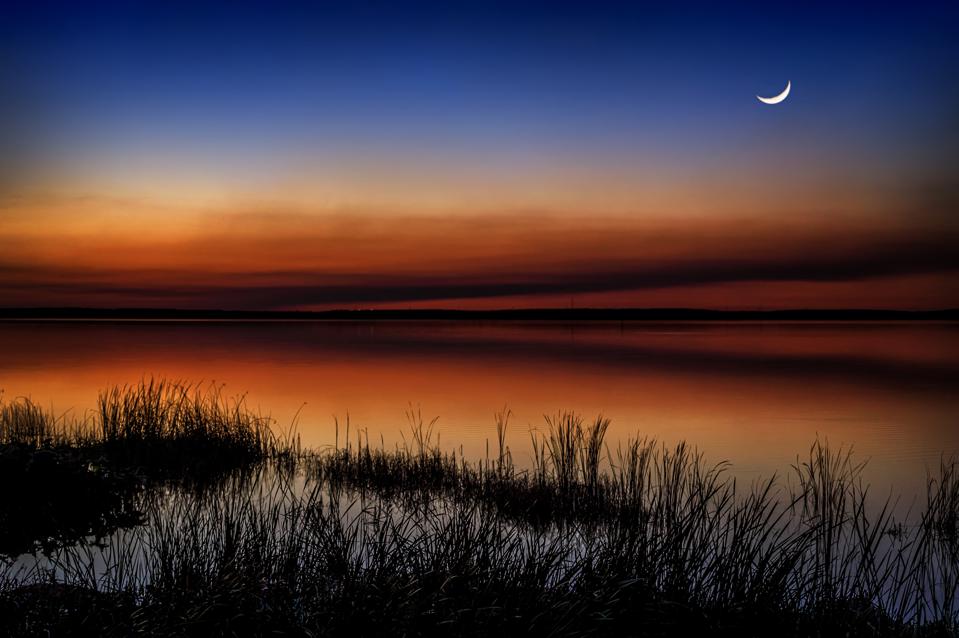 A night landscape on a swamp in Florida with the new moon.

This week it’s all about the moon. Specifically, the young moon, which after Sunday’s New Moon will to be visible as a super-slim crescent low in the sky after sunset. While of little astronomical interest, there’s an unspoken competition between stargazers to be the first to see the crescent moon each month. So why not give it a try?

Right after sunset on Monday, go outside and, if you have a clear view to the western horizon at sunset, scan around for a very slim waxing crescent moon. You’re almost certainly going to need binoculars to see a 1% illuminated crescent moon, which will be barely a day old. At around 6° above the horizon, this is going to be a challenge, since it will be sinking all the time and will be beneath the horizon very quickly. In any case, look below the bright planet Venus to stand a chance of seeing it.

Look west immediately after sunset to have a chance of seeing a day-old moon.

This evening presents and much easier target. Now almost 5% lit, the crescent moon—although not as slim as on Monday night—will be visible for a short period after sunset. This time, however, it will be around 17° above the horizon. Again, find Venus and scan down. You probably won’t need binoculars to find it, but they’ll be handy for getting a great view of the slim lit limb.

If you’re successful you’ll also see “earthshine”, sunlight that reflects from Earth onto the dark area of the moon, slightly illuminating it. It’s a beautiful sight, and it will be visible for at least the first few evenings this week. 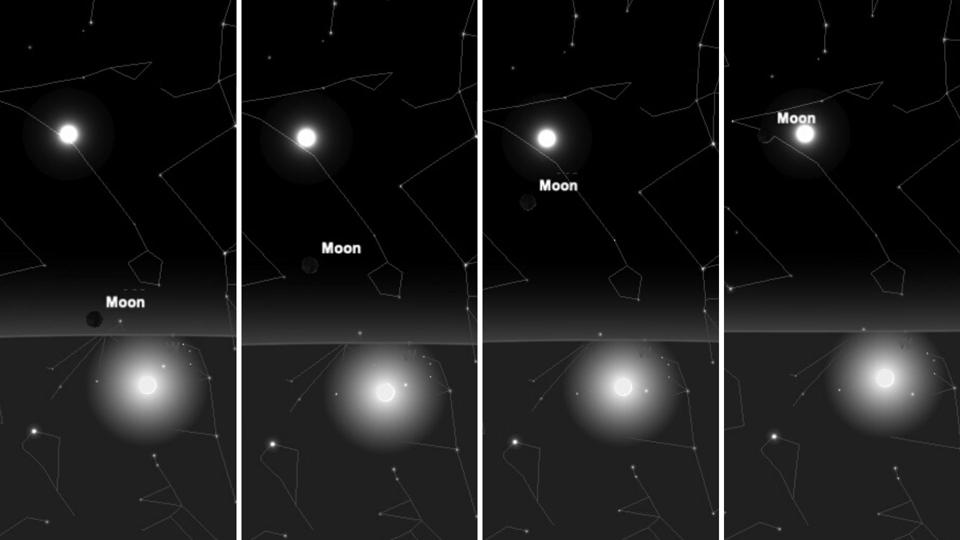 The position of the young moon this week, from Monday (far left) through Thursday (far right.

For the rest of the week, the climb of the crescent moon away from the sun—waxing all the time, so getting brighter—will be the main sight. On Wednesday it will approach Venus, on Thursday it will be alongside Venus, and on Friday it will just above Venus before its journey around Earth takes it away into the constellations.

Look out for “Earthshine” on the moon, and for Venus close by.

Today is a date that we only have in our Gregorian calendar every four years. That’s because it’s a “leap year,” when Earth’s orbit is accounted for. You see, Earth takes 365 days 5 hours 48 minutes and 46 seconds to go around the sun, so every five years we have to make back that time. It’s called a leap year because dates advance by one day; if your birthday was on a Saturday last year, in a normal year it would be on a Sunday this year … but the existence of February 29 means that it will actually be on a Monday. 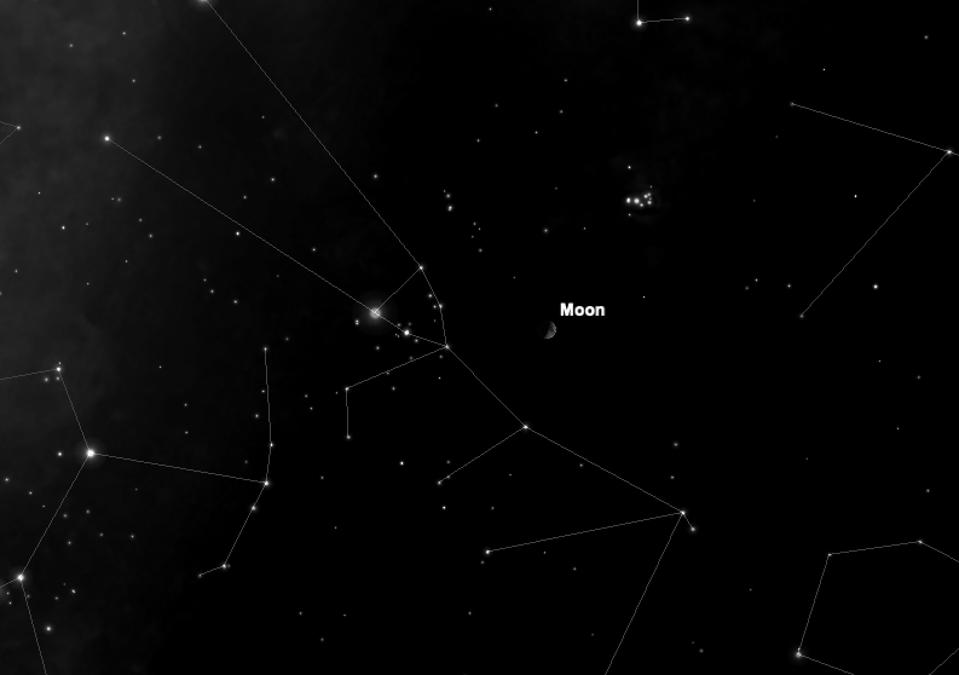 This Sunday the crescent moon will be in Taurus, close to the Pleiades star cluster.

Gaze up at this week’s target, Orion, on Sunday and you will see an interloper nearby. The moon will be visible at around 41% illumination—close to First Quarter (so called because it’s almost a quarter of a way through its monthly orbit of Earth)—actually in the constellation of Taurus. Look either side of the moon and you should see Aldebaran on one side, and the sparkling Pleiades star cluster on the other.

Constellation of the week: Orion

Arguably the most beautiful constellation in the entire night sky is Orion, the Hunter. Easy to find because of its three “belt stars”—Alnitak, Alnilam and Mintaka—Orion also contains two really bright stars Betelgeuse (pronounced “Beetlejuice” or “Bet-all-gerz”—you decide!) and Rigel, as well as Bellatrix and Saiph. 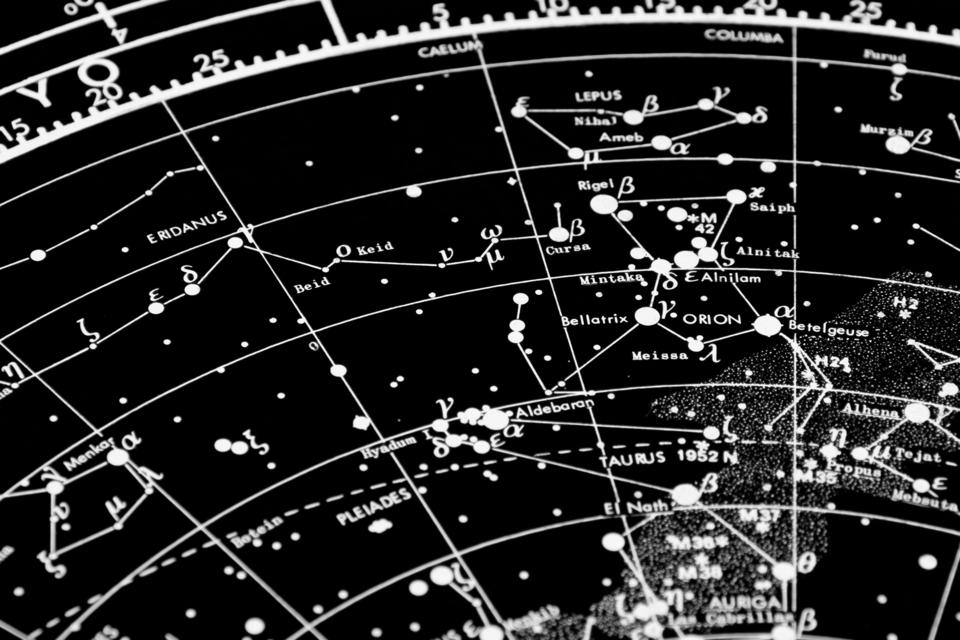 A map of the stars of the orion constellation. focus is in orion word 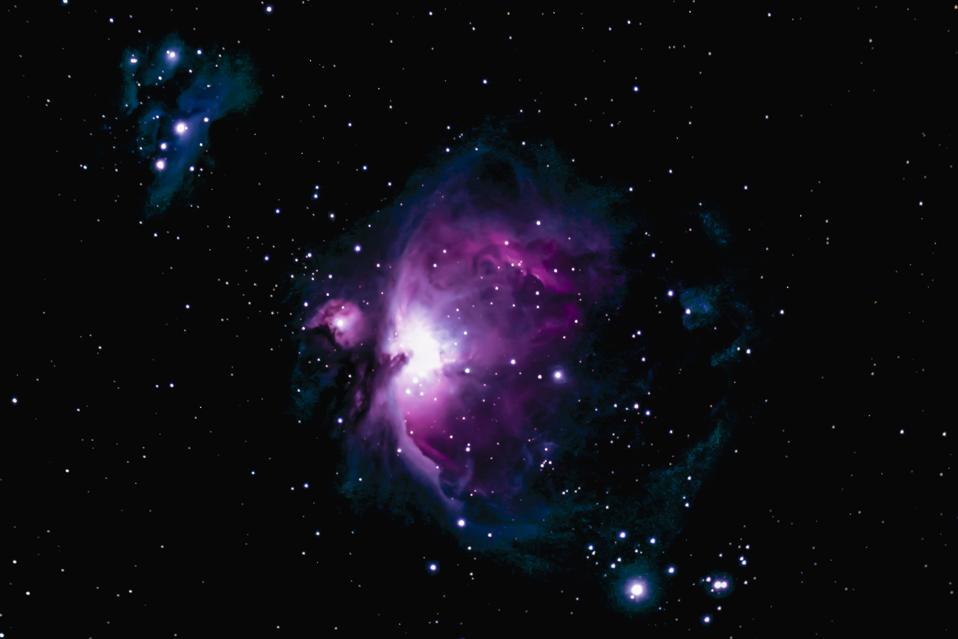 M42, the Orion Nebula is the middle star in Orion’s “sword” and is visible with the naked eye. … [+] Located about 1400 light years away, it is a young star-forming gas cluster.

Have you seen Betelgeuse lately? The orangey-red supergiant star about 650 light years from Earth has been visibly dimming in the past few months. Currently 37% of its usual brightness, some think Betelgeuse will soon explode as a spectacular supernova. Others think it always varies in brightness. Either way, what’s certain is that Betelgeuse will one day “go supernova” … sometimes in the next 100,000 years.

You’ll find Betelgeuse at the at the armpit of Orion, at this time of year above the belt stars and to the upper-left (as seen from anywhere in the northern hemisphere after dusk). Squint at it and you’ll see its reddish color.

Alex Cobb Could Give Orioles A Lift In 2020, If He Stays Healthy