‘A Dangerous Derby’: An Espanyol Versus FC Barcelona Preview 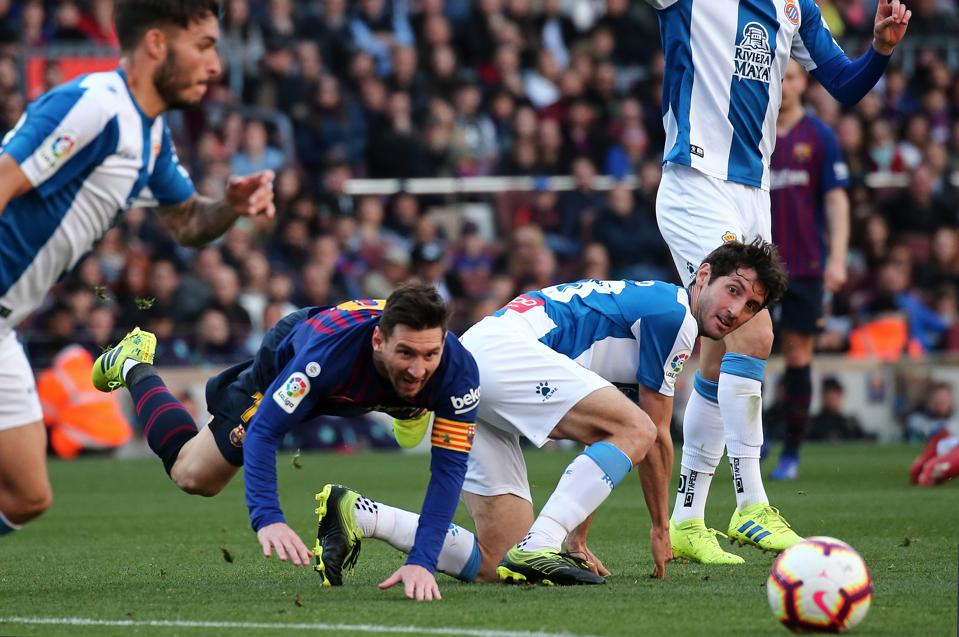 Leo Messi and Esteban Granero during the match between FC Barcelona and RCD Espanyol, corresponding … [+] to the week 29 of the Liga Santander, played at the Camp Nou Stadium, on 30th March 2019, in Barcelona, Spain. (Photo by Joan Valls/Urbanandsport /NurPhoto via Getty Images)

FC Barcelona will start 2020 with what the Catalan press has dubbed a ‘dangerous derby’ for Ernesto Valverde’s men against Espanyol on Saturday.

Currently leading La Liga by two points, Barça can run out at the RCDE Stadium a point behind bitter rivals Real Madrid should they beat their own cross-city rivals in Getafe a few hours prior.

Yet with a win of course, the Catalans would head back to the summit two clear before heading off the Saudi Arabia for the Spanish Super Cup semi-final on Thursday.

The 18-man squad that will travel to Cornella revealed late on Friday night in Europe, its most notable absence is that of Marc Andre Ter Stegen. Picking up a knee knock, he is ‘almost discarded’ from the group that will head to Saudi Arabia.

As a result, the German is replaced by 20-year-old Iñaki Peña as a back-up to the Brazilian ‘keeper Neto, whose snowboarding compatriot Arthur will still be out for another three weeks alongside Ousmane Dembele.

Though Carles Aleña has left for Real Betis on loan, his spot has not yet been assumed by Riqui Puig as the young midfielder will feature for the B team against Espanyol’s counterpart at the Johan Cruyff Stadium later today.

Making just his second competitive start since joining from Valencia, Neto is set to be protected by a back line of Jordi Alba, Clement Lenglet, Gerard Pique and Sergi Roberto from left to right.

While Nelson Semedo is fit, he appears to have lost his standing to La Masia graduate Roberto and, though director of football Eric Abidal denies this, his sale has already been discussed with agent Jorge Mendes.

In midfield, pivot Sergio Busquets will sit behind Frenkie de Jong and Ivan Rakitic. Up top, the MSG front line will look to wreak havoc on bottom-ranked oppsition.

Returning to training on January 2nd, as did the wantaway Arturo Vidal, Luis Suarez and Lionel Messi are believed to be in peak physical condition to partner Antoine Griezmann.

By the stats junkies, it has been noted that of the 25 goals he has netted at the expense of the opposition he made his debut against in 20004, Messi has only achieved 20% of them away from the Camp Nou.

Elsewhere however, Suarez has a strong record of three in six at this ground since joining the Blaugrana in 2014. Currenly on 10 goals, he can catch up to his Argentine friend and Karim Benzema in the top-scoring Pichichi ranks by prolongoing good form. Last time out, he finished 2019 in sensational fashion with three goals and an assist in the 4-1 rout of Alaves.

As for FCB overall, they have not tasted defeat to Espanyol for 20 clasicos. The last loss came in 2009, when at the Camp Nou, a side led by Mauricio Pochettino pulled off a 1-2 upset against a Pep Guardiola outfit on it way to the treble.

Now managed by Abelardo, a former Barça defender, the Parakeets are considered a dangerous package due to the way they might rise to the occasion in a derby under a new coach.

Valverde for one, after having both played and managed them, would prefer to see this weekend’s opposition stay up. Yet one would imagine that he wishes any revival to get underway sometime else and at 15.00 ET time.

How Your Next Vacation Can Make A Better Business

Grooming Your Problem-Solving Abilities for Success

The Crisis Will End, And A New Generation...

There’s No Integrity In Cheating