Breaking
The Ultimate Guide to Saving Money
Lights, Camera, Action—Is There A Post-Covid Future For...
7 Ways to Reduce Human Errors in Your...
How ‘Couples Therapy’ Used Technology To Cope With...
Can You Settle Your Student Loans Or Negotiate...
How to Use Amazon Attribution For Ad Campaigns
What are the Makings of a High-Quality Link?
How To Quickly Start And Scale Your Business
Terra Virtua: What NFTs Can Teach Us About...
5 Easy Steps To Prepare Content For E-A-T...
Physical Inactivity Linked To More Severe Covid-19 Infection...
The 2021 Estimated Tax Dilemma: What Tax-Return Pros...
Want To Digitally Transform Your Business? Start With...
How to Optimize Google My Business and Leverage...
Debunking Link Building Myths in 2021
How, When And Where You Can Gaze At...
Home General A ‘Destiny 2’ Double Exotic Necrotic Thorn Build Is So Good It’s Probably Gone Soon
General 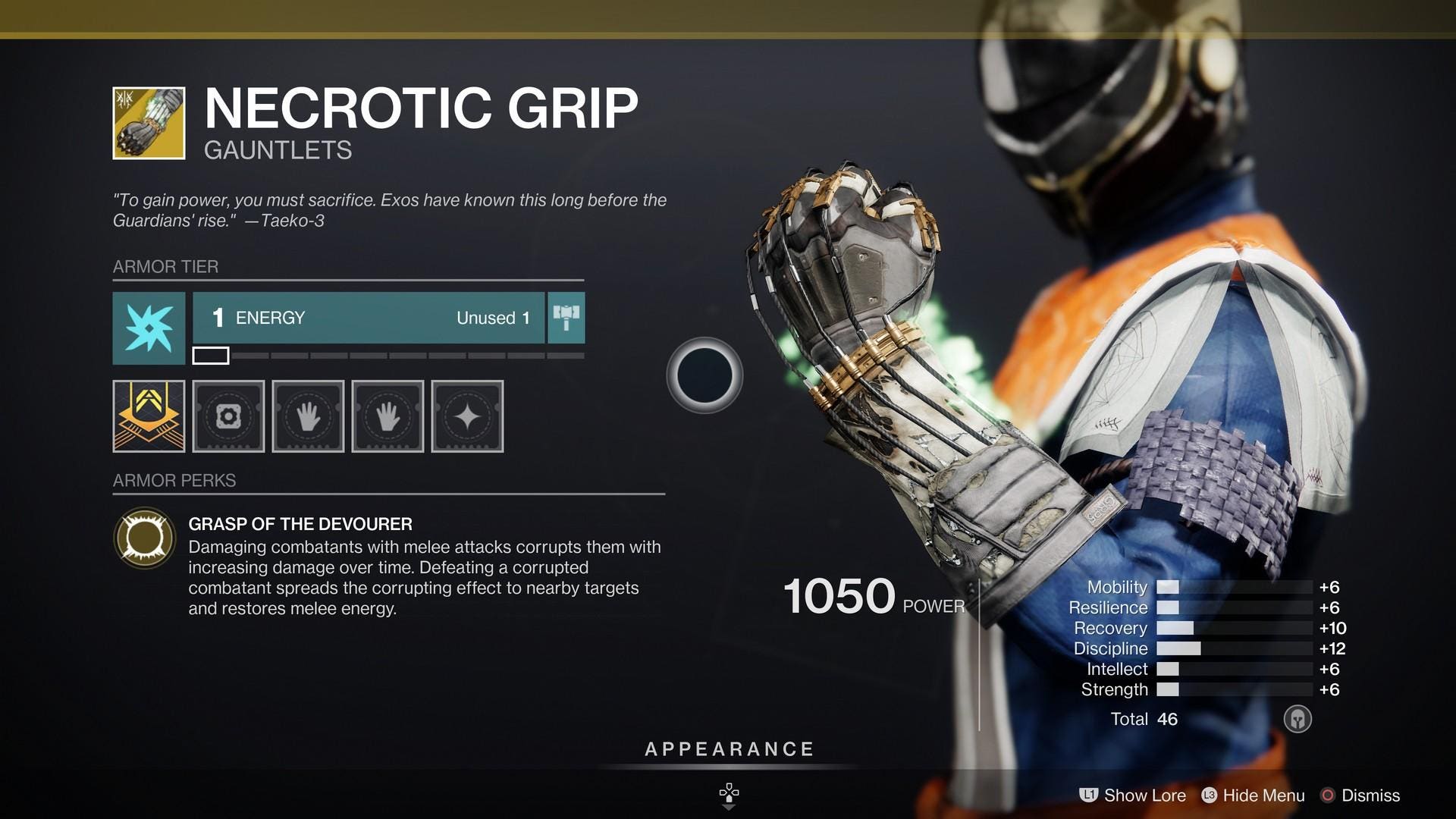 As with any new content release in Destiny 2, players are using new weapons and now an entire subclass to find various crazy combos in Beyond Light, some of which could be intended, others, not so much.

Bungie is already building up a list of things they’ve disabled in Beyond Light, which so far is Witherhoard for instant kills, repeatable moon bounties that were giving extra XP and the entire Exodus Crash Nightfall which got replaced due to an error. Next up? Maybe Wordline Zero, as people have learned how to make earth-shattering leaps with it once again.

But the best, wildest thing I’ve seen so far may not be a bug, I’m still not clear on that, but it’s a pairing of exotics that turn Thorn into essentially the new Trinity Ghoul, and then some.

The new exotic making all of this happen is Necrotic Grip, the Warlock exotic arms that poison enemies on melee, and if they’re killed, spreads that poison and returns melee energy.

The perk is called Grasp of the Devourer. Sound familiar? That’s because Thorn’s own poison-based perk is “Mark of the Devourer,” where it does damage over time on hit.

You may see where I’m going with this.

Turns out, if you are using Thorn while wearing Necrotic Grips, Thorn itself will trigger this poison spread. Kill an enemy with Thorn and a little burst pool will spread the poison to enemies nearby, creating a chain effect that does serious damage in PvP and PvE. And absolutely none of this requires meleeing enemies at all, which is supposed to be the entire point of Necrotic Grip.

My guess? This is a bug and not an interaction Bungie planned. As much as I like it when two exotics pair really well together, ie. Sweet Business/Actium War Rig, this does not strike me as intentional. I don’t know if it’s so strong that it deserves to be patched or nerfed, it really just sort of turns Thorn into a Trinity Ghoul-like weapon, only it requires you to be using another exotic at the same time. But if it’s not intentional, my guess is that it’s not long for this world, especially with all the other issues plaguing PvP in particular right now, and this may just add to the pile.

Here’s what this looks like in action via Aztecross:

(I am also posting this so no one can blame me for “snitching” on this pairing, because it’s well known at this point and that video alone has 150K views as I’m posting this here.)

My initial thought is to leave this alone. It’s certainly contextually strong and makes Thorn a massive killer in PvE, but it’s not so different than other chain-killers like Sunshot or Riskrunner or Trinity Ghoul, plus it requires you to have Necrotic Grip on. Where do you even get Necrotic Grip? If you haven’t figured it out yet, the way to get the new exotics is to solo farm Legend or Master Lost Sectors on the respective days when they have Arms Exotic armor as a reward, and that slot rotates daily. I’m not high enough to do these comfortably yet, but I will be next week, I’m guessing.

Anyway, we’ll see what happens with this. I would not be surprised to see either Thorn or Necrotic disabled, but I hope that isn’t the road Bungie takes.

Slow Work From Home Mornings? Try These Tips To Supercharge Your Sunrise