Breaking
NBA-Backed Saliva Coronavirus Test Gets Emergency FDA Authorization
The Amazing High-Yield REIT Strategy For 7.9% Dividends,...
How To Attract Candidates To Hard-To-Fill Positions
Trump: I’m ‘Ready’ To Take Action On Stimulus...
Apple iOS 13.6.1 Release: Should You Upgrade?
Non-PPP Loan Approvals Continue Slow But Steady Rebound
Here’s How To Stay One Step Ahead Of...
Microsoft Outlook Will Store Contacts’ Blood Group And...
How The US Department Of Health & Human...
Why Do Chinese Companies List Their Shares In...
Can You Get Covid-19 Coronavirus From Food? Frozen...
Winklevoss Twins Tell Bar Stool’s Dave Portnoy To...
How Democrats And Republicans Would Tackle The Enduring...
Berkshire Hathaway Doubles Down On Net Lease REIT,...
70% Of Americans: Ban Foreign Apps
This Week In Credit Card News: Pandemic Brings...
Home Technology A Major Winter Storm Could Produce A Foot Of Snow On The Plains This Weekend
Technology 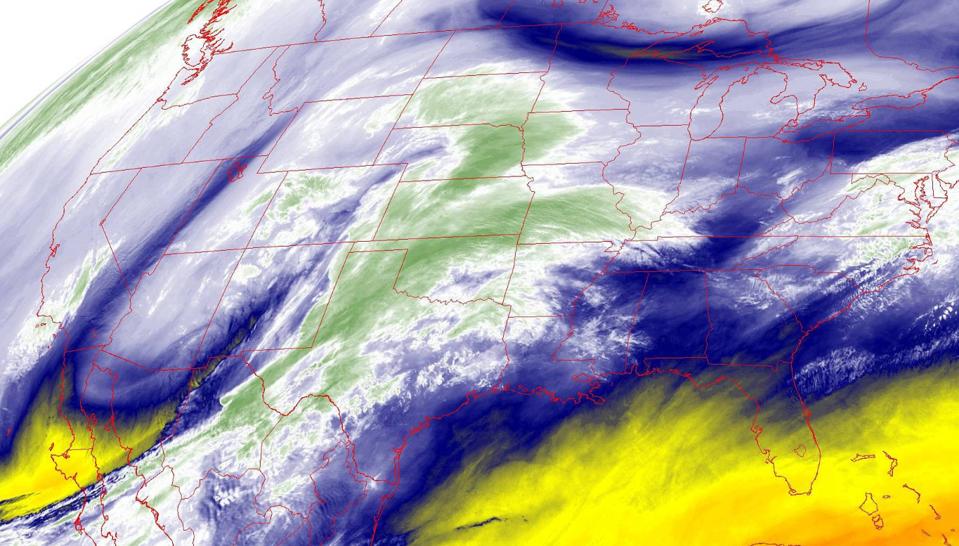 A water vapor image of a developing winter storm over the central plains on December 27, 2019.

A significant winter storm will develop over the Plains this weekend and potentially hamper travel on one of the busiest travel weekends of the year. Winter storm warnings are in place from Colorado to Minnesota ahead of a thumping that could produce more than a foot of snow by Sunday night. A period of freezing rain could leave a crust of ice on exposed surfaces before the snow begins in some areas, further endangering travel and potentially leading to tree damage and power outages.

The upcoming winter storm is part of the same system that brought heavy rain and thunderstorms to California on Christmas Day. Freezing rain and snow was already developing over western and central Nebraska on Friday evening. The storm will continue to grow into Saturday as the upper-level trough and jet stream come into better alignment and allow the low-pressure system at the surface to organize and strengthen. 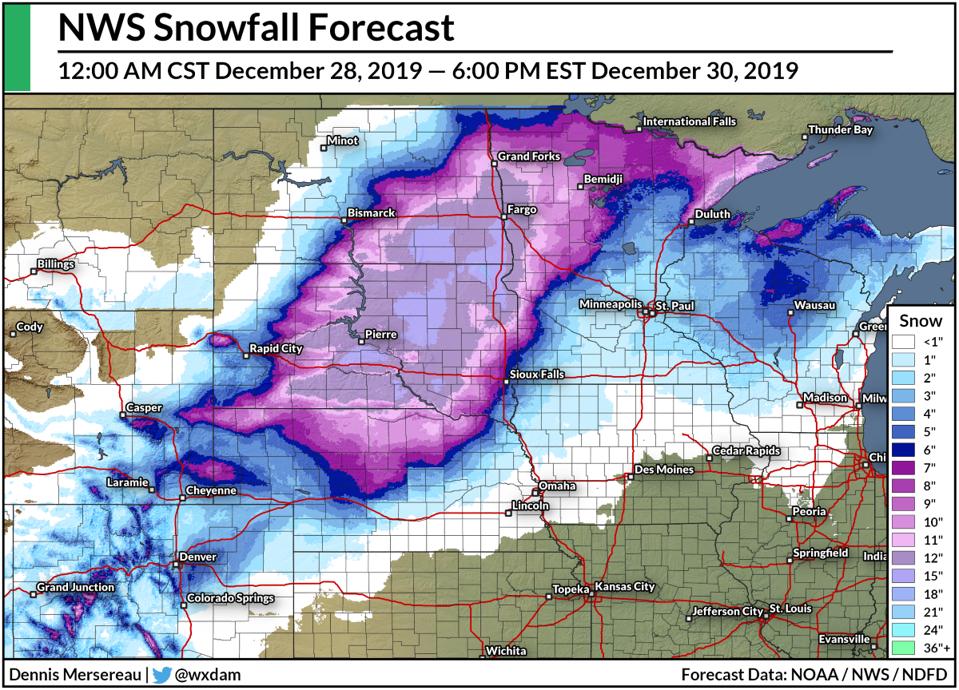 The NWS’s snowfall forecast through the evening of Monday, December 30, 2019.

Heavy snow will fall on the northwestern side of the low, where heavy precipitation coincides with the coldest air. As of late Friday night, forecasts from the National Weather Service called for more than a foot of snow across a widespread portion of the central and northern Plains, with the heaviest snow likely falling on the Dakotas. Fargo, North Dakota, could see as much as 15 inches of snow by the end of the storm on Sunday if current forecasts pan out. 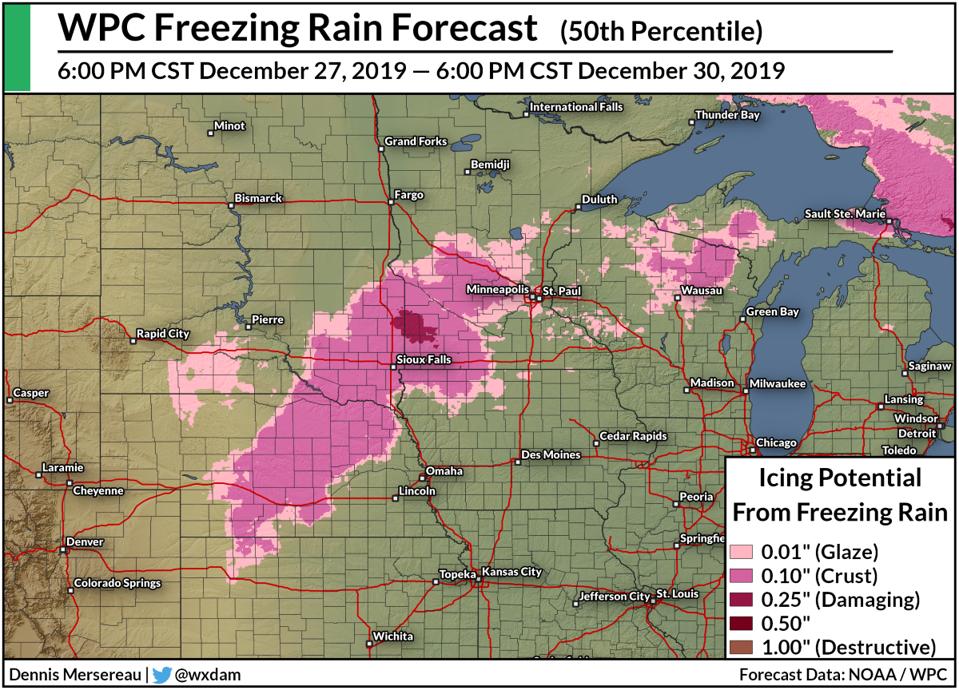 The Weather Prediction Center’s freezing rain forecast through the evening of December 30, 2019.

Farther south, we’re likely going to see a pretty steep cutoff between significant snowfall totals and a dangerous mix of precipitation types. The greatest uncertainty lies along and just northwest of the expected track of the low-pressure system itself, since this is the area where warm air from the south will have the best chance to interfere with the snow and produce freezing rain.

Sioux Falls, South Dakota, could see a period of freezing rain before colder air aloft pushes in and precipitation changes over to all snow. Right now, the NWS expects the city to see about one-tenth of an inch of ice followed by about 6 inches of snow. Minor shifts in the track of the storm could lead to significant changes in snowfall and ice totals.

Areas that see a solid crust of ice followed by heavy snow are at risk of falling trees and power outages. Some good supplies to have on hand in anticipation of power outages include food that doesn’t require cooking, water, flashlights, and enough batteries to last for a couple of days if needed.

Snow is manageable to an extent. Once totals start creeping into the double-digits, however, it’s hard even for the most experienced individuals to be able to drive around and continue with their day as if everything was just fine. It’s even more difficult to deal with snow when it falls on top of a crust of ice, which eliminates traction and can lead to vehicles getting stranded.

The prospect of freezing rain is especially unwelcome news for air travelers. Airlines will delay and cancel flights at even the hint of freezing drizzle, since any icing on an aircraft’s surface can make it impossible to fly safely. The airports in Denver and Minneapolis both stand to see some wintry precipitation from this system. However, it only takes a little bit of snow and ice to cause delays and cancellations, so prepare ahead of time for potential changes to your itinerary.

Miller64 Plans To Give Away Free Beer For Dry-Ish January