Breaking
Everything You Need to Know About Corporate Social...
Is Adaptive Leadership the Key to Motivating Employees?
Why business events are set to return with...
Business events set to return with a bang!
Expanding Internationally: 5 Things to Consider for eCommerce...
How the Machine Shop Is Going Digital in...
Sustainable Food Packaging Is Helping the Hospitality Sector...
Top 5 Investment Practices To Make More Money...
Managing IT Requirements for SMEs: 5 Aspects that...
How To Build a Successful Luxury Brand In...
Finding The Best Google AdWords Consultant for Your...
8 Top Tips To Help Your Agricultural Business...
Three Reasons Why Office Décor and Design Are...
Looking To Improve Efficiency In Your Business? Here’s...
AI and machine learning for business
How Social Media Changed the World
Home Technology A More Intelligent Approach To Capitalism
Technology

A More Intelligent Approach To Capitalism

As loyal readers of this column will know, your correspondent views capitalism as the economic expression of our species’ most powerful advantage – Adaptation – and believes that capitalism is one tool that has the potential to allow our species to thrive in a changing climate.

In the midst of the COVID-19 crisis, I have been dismayed to see headlines blaming capitalism for the pandemic or for some aspect of it (e.g., here, here, and here).

In my view, these commentators have identified real problems, but mistakenly associate them with the wrong agent. Rather than bemoaning its effects, we should rejoice in capitalism’s power.

However, while rejoicing, we must seek to reform the deeper structural issues that cause capitalism to manifest itself in the way it does. Doing so, we have a chance to create a form of capitalism that is more intelligent, less destructive, and ultimately much more value-creative than the one that grew out of the Industrial Revolution.

Capitalism is successful because it is natural. Thanks to a few generations’ worth of Physics Envy, modern, mainstream economists appear to have little sense the work they do has a relationship to natural processes.

To gain insights into the natural characteristics of complex economic systems, your correspondent finds it more helpful to read the work of ecologists.

A few years ago, the US Army War College’s Strategic Studies Institute site published a paper entitled Defense Energy Resilience (Thomas and Kerner, 2010). This paper draws lessons from the work of two Australian ecologists, Walker and Salt, to discuss the concept of resilience from the perspective of a complex, interdependent system.

The SSI authors posted a diagram that has stuck with me for over 10 years and which I include in my presentations to investor groups even today. 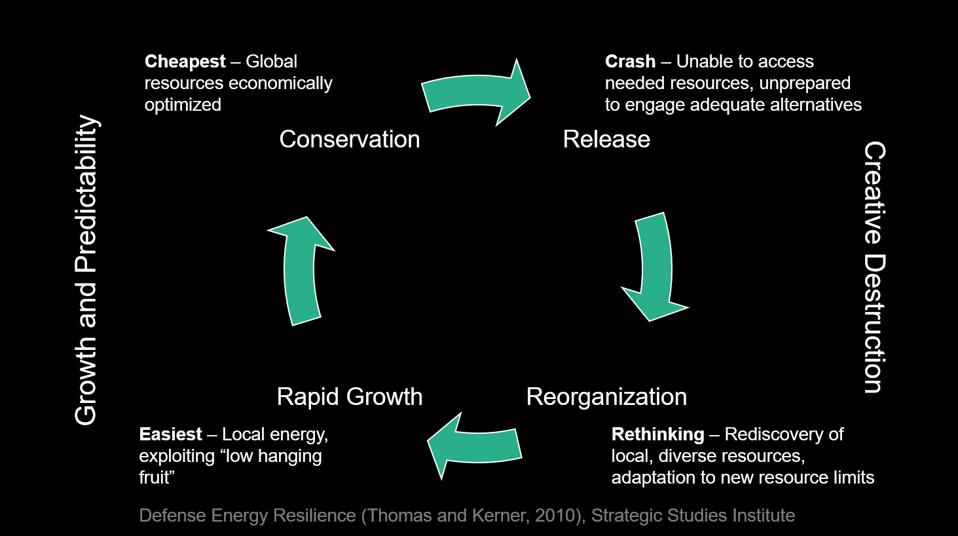 A diagram of the four stages of a complex adaptive system. Adapted from Thomas and Kerner’s 2010 … [+] paper “Defense Energy Reslience”.

The Conservation stage tends to be long and stable in complex systems due to these systems’ innate tendency to preserve equilibrium. Participants in Conservation stage systems win by maximizing the use of available resources and tend towards efficiency-generating specialization.

These giant beasts of the Triassic are, in my mind, very similar to the giant, highly-specialized multinational corporations to which we have become so accustomed during the Post-War period.

For instance, Alphabet’s production capacity is an almost perfect analog to Tyrannosaurus rex’s tiny arms. Alphabet’s operations are specialized to create software that extracts personal information from consumers, but is not set-up to create physical products. T. rex’s jaws were peerlessly evolved to rip large chunks of meat but their spindly arms were practically useless. Recent research has definitively proven that an asteroid thrust the dinosaurs’ system into the “Release” stage – a period characterized by a complete failure of Conservation stage rules. Perfectly tuned to making efficient use of resources that were no longer available, the dinosaurs quickly died off.

The COVID-19 pandemic is giving us a taste of the Release stage in our own world. Global supply chains, finely tuned to operate on a Just-In-Time basis have been under strain, resulting in empty grocery store shelves and medical professionals in New York wearing garbage bags rather than proper protective gear. 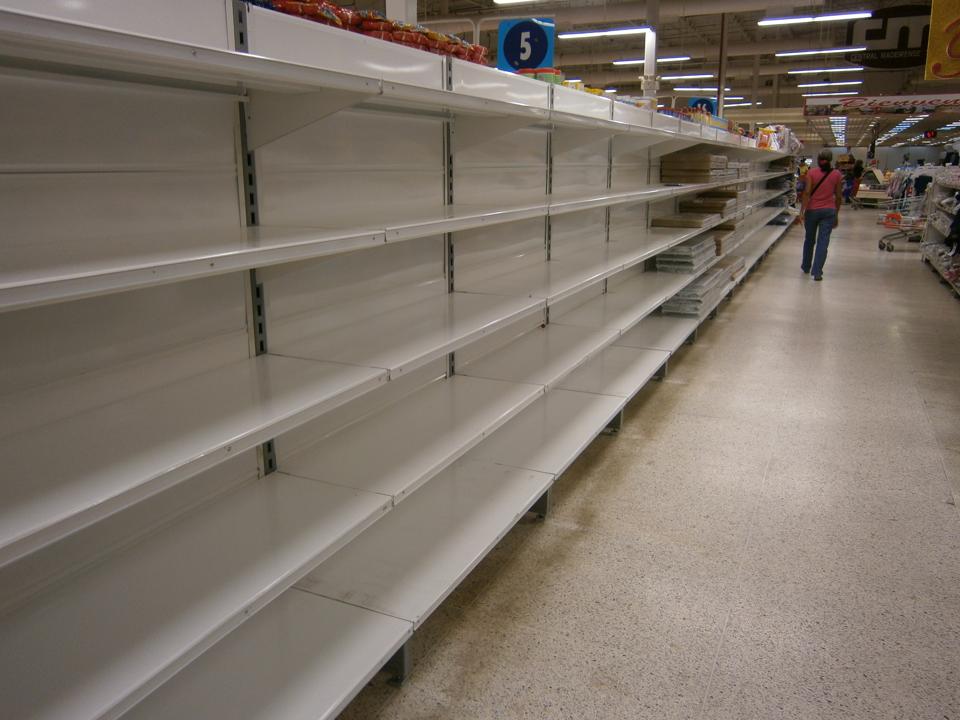 Pundits are talking about COVID-19 being a “dress rehearsal” for future pandemic events. My belief is that COVID-19 does present us with a foreshadowing of a “Release” event in some form, but whether that event manifests itself as a pandemic, a widespread crop failure, or some unknowable black swan tragedy, no one yet knows.

Dinosaurs were dumb beasts. The smartest of them was about as clever as my Black Lab mix. They had no capacity to survive post-asteroid.

Humans – self-aware, cooperative, communicative, and intelligent, with the added benefit of having opposable thumbs – possess a much greater capacity to escape dinosaurs’ grave fate. This capacity exists because of our adaptability; adaptability lies at the root of capitalism.

What people decry now as the failure of capitalism is simply a side-effect of the natural tendency of participants in a complex system to maximize resources within a state of Conservation.

Capitalism solves problems. Complex systems seek stability. Stability favors incumbents in a Conservation state no matter how ultimately destructive the actions of those incumbents might be.

With our understanding of these dynamics, we should be focusing on altering the rules by which our complex systems function to prepare for a shift to the next two stages in our system’s evolution. Altering the rules will encourage capitalism to solve the most critical roadblocks to an abundant, sustainable future.

This chain of logic suggest that our policy makers must consider how to engineer a system in which capitalists are incentivized to solve problems of supply chain resiliency, cheap, clean, and plentiful energy production and storage, the production of nutritious food, low ratios of waste to product, and all the other factors that go into sustaining life on this blue-green island floating in the midst of a cold, dark sea.

Capitalism is the best way for us to survive, but its manifestation is contingent on the rules for the system in which it operates. Those rules are at least partly subject to our control.

We must change the rules if our species is to thrive. Intelligent investors take note.

Resilient MBA: 5 Advantages MBAs Have Sailing Into The Crisis