With the end of the decade comes one more giant discovery in the shape of a nearly 17 feet (about 5 meters) long shark fossil. Clocking in at a whopping 91-million-years-old, the fossil was discovered in Kansas (USA) by researchers Dr. Kenshu Shimada and Michael Everhart and two Kansas residents, Fred Smith and Gail Pearson. The study, which appears in the Journal of Vertebrate Paleontology, details how the ancient shark, now named Cretodus houghtonorum, was not excavated this year but nine years prior at a ranch near Tipton, Kansas in sediments deposited in an ancient ocean called the Western Interior Seaway that covered the middle of North America during the Late Cretaceous period (144 million to 66 million years ago). 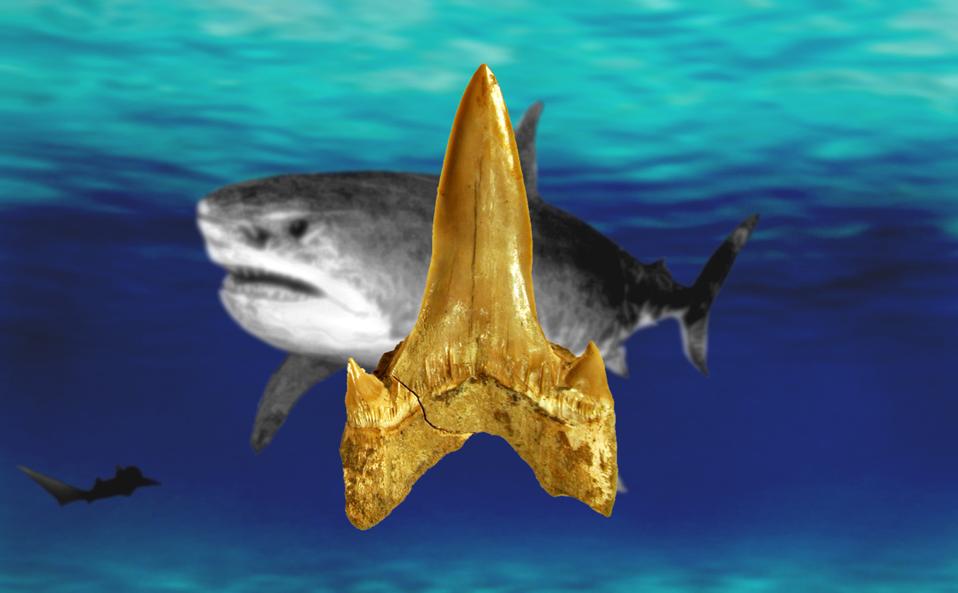 Tooth of the newly described, 91-million-year-old fossil shark from Kansas, Cretodus houghtonorum, … [+] with its hypothetical body restoration in the background along with a small hybodont shark scampering away near the ocean floor. The large fossil specimen of C. houghtonorum co-occurred with two fragmentary fin spines of a small hybodont shark, possibly representing remain of stomach content of the C. houghtonorum individual.

During the excavation Shimada, a professor of paleobiology at DePaul University in Chicago and research associate at the Sternberg Museum, and Everhart, also a research associate at the Sternberg Museum, believed they had a specimen of Cretodus crassidens. This Cretodus species was once a large lamniform shark that could be found swimming worldwide during Cenomanian-Turonian time (Late Cretaceous). Now extinct, it was originally described from England and subsequently reported commonly from North America from isolated teeth and vertebral centra.

“Much of what we know about extinct sharks is based on isolated teeth, but an associated specimen representing a single shark individual like the one we describe provides a wealth of anatomical information that in turn offers better insights into its ecology,” said Shimada, the lead author on the study, in a press release.

However, according to Shimada, not one tooth of this 2010 fossil matched the tooth shape of the original Cretodus crassidens specimen or any other known species of Cretodus. “That’s when we realized that almost all the teeth from North America previously reported as Cretodus crassidens belong to a different species new to science,” he explained. 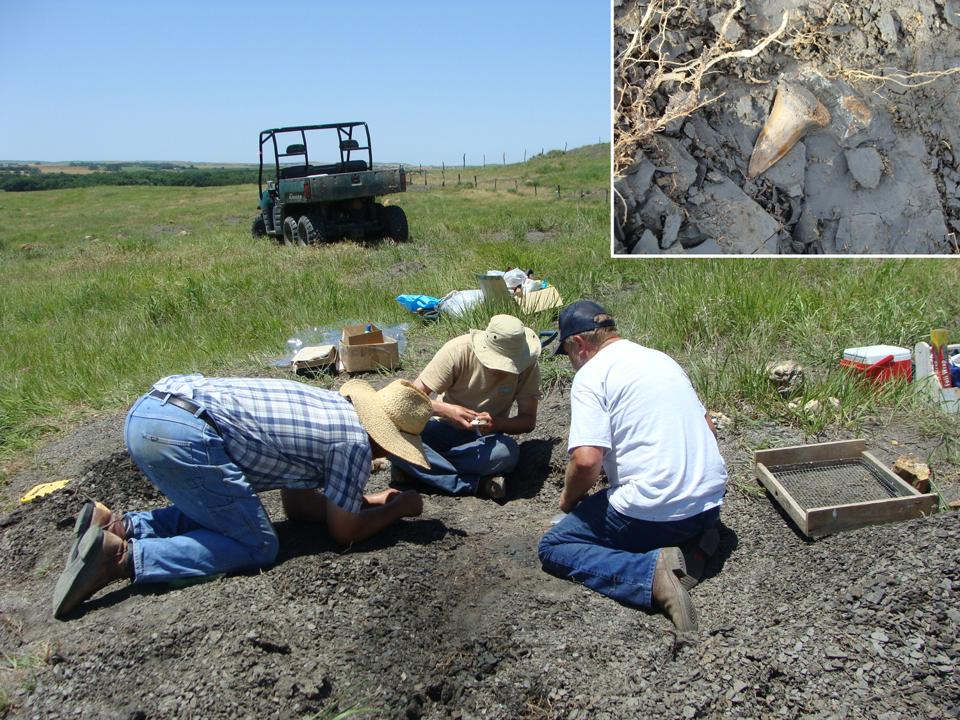 Excavation of a partial skeleton of the newly described, 91-million-year-old fossil shark, Cretodus … [+] houghtonorum, in central Kansas in 2010, showing two local residents, Fred Smith (left) and Gail Pearson (right), assisting the lead author of the new study, Kenshu Shimada (middle). Inset shows a tooth of the shark as found. The species name ‘houghtonorum’ is in honor of the land owners Keith and Deborah Houghton who generously donated the specimen to the Sternberg Museum of Natural History in Hays, Kansas, for science.

While this new species has an incomplete skeleton at only 134 teeth, 61 vertebrae, 23 placoid scales and fragments of calcified cartilage, it is the best Cretodus specimen discovered in North America and apparently can get even larger than the reported 17 ft (5 m). According to the study, the growth model of the shark indicates that it could have theoretically reached up to about 22 ft (about 6.8 m). “What is more exciting is its inferred large size at birth, almost 4 feet or 1.2 meters in length, suggesting that the cannibalistic behavior for nurturing embryos commonly observed within the uteri of modern female lamniforms must have already evolved by the late Cretaceous period,” Shimada added.

Does the word “lamniformes” sound familiar? It should! This shark group includes famous species like the great white shark (Carcharodon carcharias) and sand tiger (Carcharias taurus) and it seems this rather sluggish ancient shark was a distance cousin to them. Curiously, it was also found with remains from two other sharks: Squalicorax and a hybodont shark. “Circumstantially, we think the shark possibly fed on the much smaller hybodont and was in turn scavenged by Squalicorax after its death,” said Everhart. 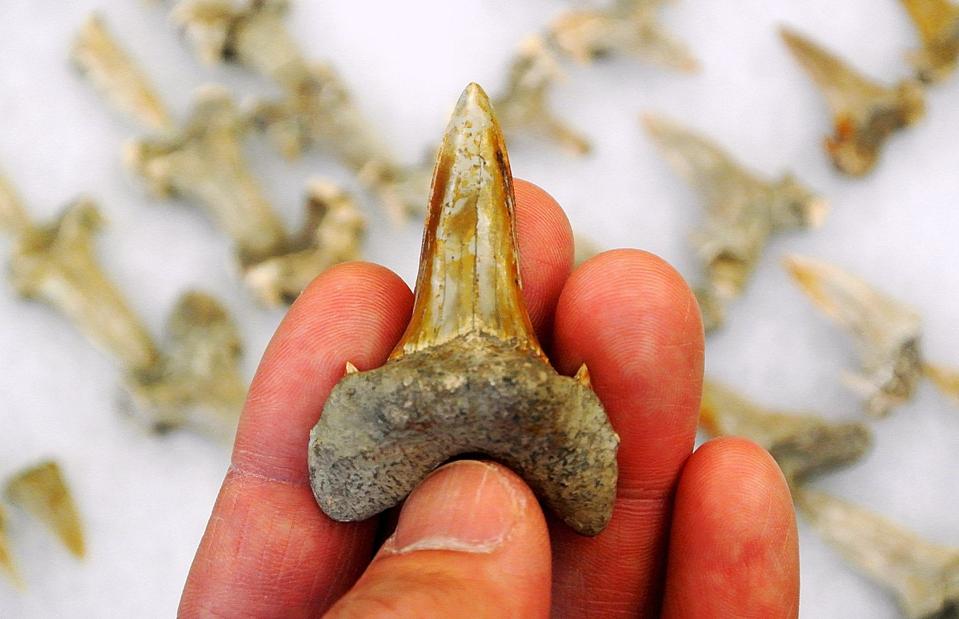 Close-up view of one of over 100 associated teeth of the newly described, 91-million-year-old fossil … [+] shark from Kansas, Cretodus houghtonorum. The extinct shark lived in the Western Interior Seaway that covered the middle of North America during the Late Cretaceous Period, the last part of the ‘Age of Dinosaurs.’ The fossil shark is estimated to be slightly over 5 meters (nearly 17 feet) in length.

Fossils are cool, yeah… but what can these long-gone sharks really teach us? Turns out, a lot! “As important ecological components in marine ecosystems, understanding about sharks in the past and present is critical to evaluate the roles they have played in their environments and biodiversity through time, and more importantly how they may affect the future marine ecosystem if they become extinct,” elaborated Shimada.

These sorts of discoveries would be impossible without the cooperation of local landowners and amateur fossil collectors, according to the authors. In fact, the species name houghtonorum is in honor of Keith and Deborah Houghton, the landowners who donated the fossil to the museum! “We believe that continued cooperation between paleontologists and those who are most familiar with the land is essential to improving our understanding of the geologic history of Kansas and Earth as a whole,” concluded Everhart.

The Milky Way Just Showed Up. Here’s How...