A Perfect Storm: Coronavirus, Major Earnings Reports And An Overvalued Market Could Slam Investors This Week 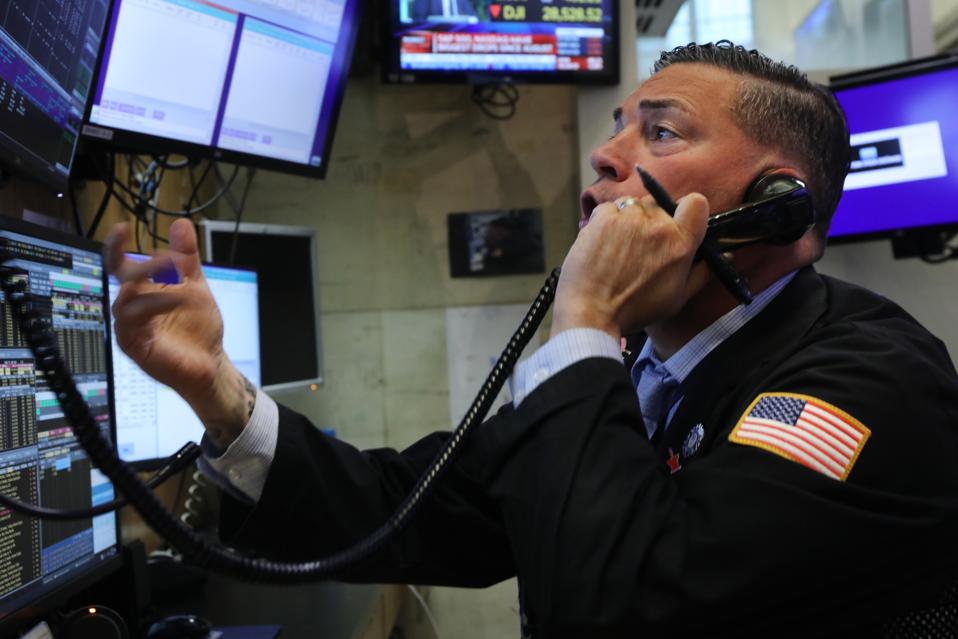 All three major indexes recorded their worst day in months.

Topline: It’s a big week for the market with a host of major companies set to report earnings as stocks pare back from near-record highs on rising concerns over the severity and economic impact of the deadly Chinese coronavirus.

Crucial statistics: All three major indexes are off to a rough start this week after recording their worst losses in months on Monday. The S&P 500 was down 1.3%, while the Nasdaq Composite plunged 1.7% and the Dow Jones Industrial Average lost 1.4%. It was the Dow’s worst single-day drop since October 2, the S&P’s worst since October 8 and the Nasdaq’s worst since August 23, according to Dow Jones Market Data. Crude oil prices also hit a three-month low on Monday, with U.S. West Texas Intermediate falling to $53 per barrel.

Crucial quotes: “Hopes that the virus would be contained were squashed over the weekend,” says Ryan Detrick, senior market strategist for LPL Financial. “Although historically these outbreaks have been buying opportunities, the bottom line is investors are taking a sell first and ask questions later approach right now.”

“The Chinese economy—and possibly the world economy—will take a hit in the short run and lower prices are a rational response to the increasing spread of the coronavirus,” predicts Chris Zaccarelli, chief investment officer for Independent Advisor Alliance. “However, over the medium term, this will likely prove to be a buying opportunity.” Zaccarelli compares the coronavirus with the SARS outbreak: During the 5-month period starting in mid-November 2002 until mid-March 2003, the S&P 500 dropped 12% but ended up actually finishing that year 19% higher than where it started, he notes.

Big numbers: As the coronavirus spreads at an accelerating rate—with China’s quarantine measures apparently not slowing the rate of infection—investors are wondering when the number of cases will start to level off. If the coronavirus becomes as dangerous as the 2002-2003 SARS outbreak (which killed some 800 people and wiped $40 billion off of world markets, according to one study), then it could impact China’s already slowing economic growth. “Even in the best-case scenarios where the virus is contained over the coming weeks, China’s Q1 [2020] economic statistics will likely suffer a large blow,” Crisafulli wrote in a note on Monday. The Economist Intelligence Unit, for instance, recently forecast that China’s annual projected growth rate of 5.9% would be dragged down by 0.5% to 1% in total, while S&P Global warns that the virus could slice as much as 1.2%.

What to watch for: Some public health experts recently estimated that the number of Chinese residents infected with the virus is substantially larger than the cases reported by the government so far. The outbreak comes at an inopportune time for China, which is already facing challenges such as rising food prices and slowing GDP growth, as well as ongoing trade tensions with the U.S. and political challenges in Hong Kong.

What Every Business Can Learn From Canva’s Unconventional Privacy Notice

Enrollment and Cost Estimates for the Biden, Buttigieg, Warren, and Sanders Health Plans