Breaking
ESBC Major Updates: Tons Of Heavyweight Greats Added...
5 On-Demand Courses To Help Develop Your Leadership...
How to Run Nonprofit Marketing Ads
Entrepreneurs Are Bringing Transparency To Home Buying And...
Best Incentive To Get Vaccinated: Money, Messaging, Or...
Page Level Query Analysis at Scale with Google...
How A CIO Can Align IT With Business...
Blogger of the Month: Jo, Girl Eats World
6 Things Women In Business Know That Men...
How to Use First-Party Data for Ad Personalization
Pressing Reset—Putting A Fallen Unicorn Back On Its...
How We Went Viral: Promoting Content with Influencers,...
Blame Olympic Record Price Tag For Return To...
Apple iOS 14.5 Release: Should You Upgrade?
How to Come up with Podcast Topics and...
Why Gaming Gear Company Razer Launched A $50...
Home Business ‘A Pure Derby’: How The Catalan Press Reacted To FC Barcelona And Espanyol’s Thrilling Draw
Business

‘A Pure Derby’: How The Catalan Press Reacted To FC Barcelona And Espanyol’s Thrilling Draw 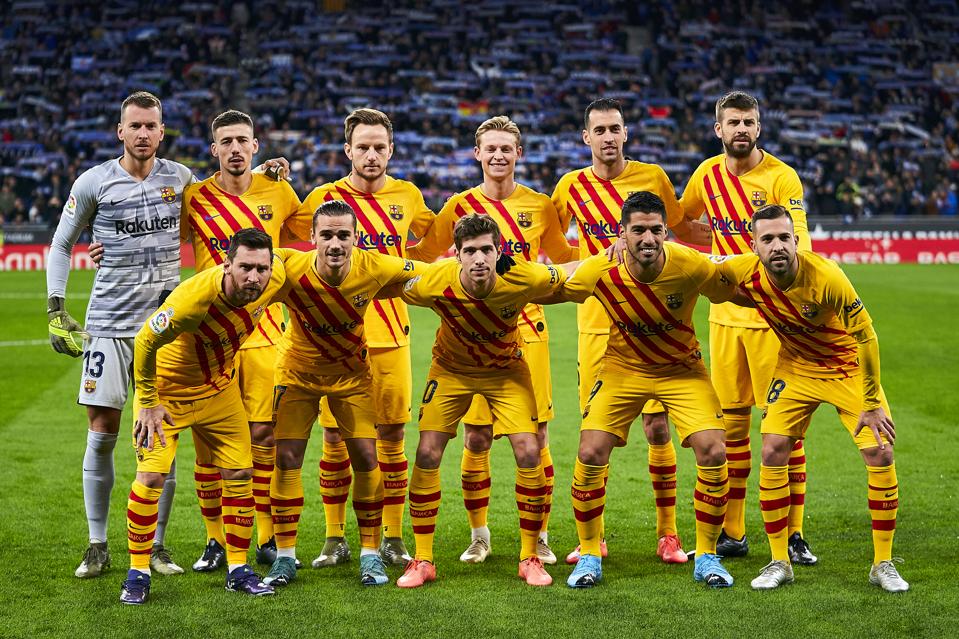 BARCELONA, SPAIN – JANUARY 04: Players of FC Barcelona poses on team’s line up prior to the Liga … [+] match between RCD Espanyol and FC Barcelona at RCDE Stadium on January 04, 2020 in Barcelona, Spain. (Photo by Quality Sport Images/Getty Images)

Falling behind early, FC Barcelona managed to build a 1-2 lead away at Espanyol on Saturday before Wu Lei stole a point for the hosts at the death by sealing a 2-2 draw.

Though not overly impressed with the performance of Ernesto Valverde’s men, the local sports daily newspapers were thrilled by the spectacle and reacted accordingly in this morning’s print editions.

Mundo Deportivo’s headline branded it a ‘pure derby’ and within, Gabriel Sans started his write-up of the action by declaring that the cross-city rivals – top and bottom of the La Liga table – had to ‘win by definition.’

While Barça looked to ‘uncork 2020 imposing their authority’, Espanyol tried to ‘make sense of a new change on the bench’ in manager Abelardo and showed ‘stubbornness’ in ‘clinging [on] to the miracle of salvation’.

Editor Sergi Sole was critical of the manner in which the Blaugrana fell behind yet again on the road by stating that ‘starting six games away from home losing is not normal in a team [that has won the last] eight out of 11 [titles]’.

‘It is incomprehensible to give up 15 points of 30 as a visitor and give away three wins [as they have at Osasuna, Real Sociedad and now Espanyol in 2019/2020] after having come back [from a goal down to lead],’ scathed Sole. ‘The Supercup is coming,’ he noted, ‘always the fourth title [in terms of importance] although now with more relevance and pressure, and there is still a lack of self-criticism in a Valverde that is losing the few followers that remained in May.’

MD director Santi Nolla remarked that Espanyol ‘took advantage of the moments of weakness from FC Barcelona’ and that the latter’s ‘physical undertone sank’ after they were reduced to ten men when Frenkie de Jong was red-carded.

‘The club has quality but lacks the physicality to shine,’ Nolla added. ‘Self-regulation is an explanation for the lack of spark, but the team does not dominate the games. It lifts them, has the ability to react, [and] has enough quality to turn around a bad result, but still has no weight to destroy his rivals.’ it was lamented.

‘No one was highly surprised that the match ended in a draw,’ he began to conclude, ‘With ten minutes alone [those in which Barça took the lead with goals from Luis Suarez and Arturo Vidal in the 50th and 59th], sometimes, it is not enough to win a match.’

‘The Derby Returned’ was what they ran with over at SPORT.

‘Barça sinned as a conservative in the Cornella derby,’ penned Javier Girlado, in reference to the Barcelona suburb in which the RCDE Stadium is located. ‘They ended up bumping into the energy of Abeladro’s new Espanyol, who did not give up at any time and ended up celebrating the tie in a very intense game – especially after the break.’

‘The game started with a very clear script: Barça dominated and Espanyol defended, but without clear opportunities and with a Christmas [ie rusty] rhythm, [it was] almost a friendly match if it were not for the power [transmitted by the fans] in the stands, [who were] always ready to live a derby with intensity,’ expanded Giraldo further.

‘With their best possible eleven, Barça tried to corner Espanyol, but lacked fluidity and finishing. They found no game for the wings: each attack was a traffic jam on the edge of the Parakeets’ area while Abelardo’s boys defended themselves with solvency’

In their player ratings, Suarez fared best with an eight for being the team’s ‘leader’ and heading the comeback. His front line partner Antoine Griezmann received a mere four for going ‘missing’ however, as did a ‘maladjusted’ Ivan Rakitic and Frenkie de Jong for getting sent off.