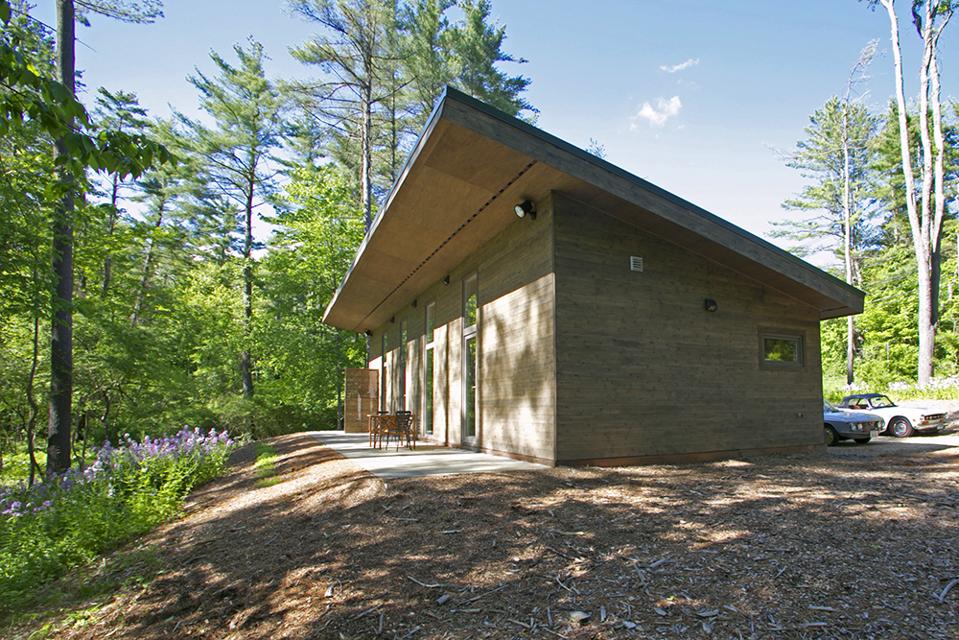 This 1005 square foot house is filled with light and beautiful surroundings.

Photo courtesy of Randy O’Rourke for Downsize: Living Large In a Small House

This small house in Sharon, CT is a perfect example of how small doesn’t mean cramped or uncomfortable. This beautiful little gem is filled with light, easy access to the outside, low maintenance and energy efficiency.

After getting divorced, Tom Morton decided he wanted to build a house for himself that would be minimal, environmentally friendly, and unique. He wanted it to be rustic yet modern, have a small footprint but feel open, be simple but high functioning, and most of all be sustainable. Tom’s friend, German Passive House (PH)–certified architect Hicks Stone, helped him with the land selection and site of the house as well as its design and layout: a simple two-room structure with a living, dining, and kitchen area, and a bedroom with an en suite bathroom. Given Hicks’s experience, Tom knew he would get the energy-efficient house he was envisioning. 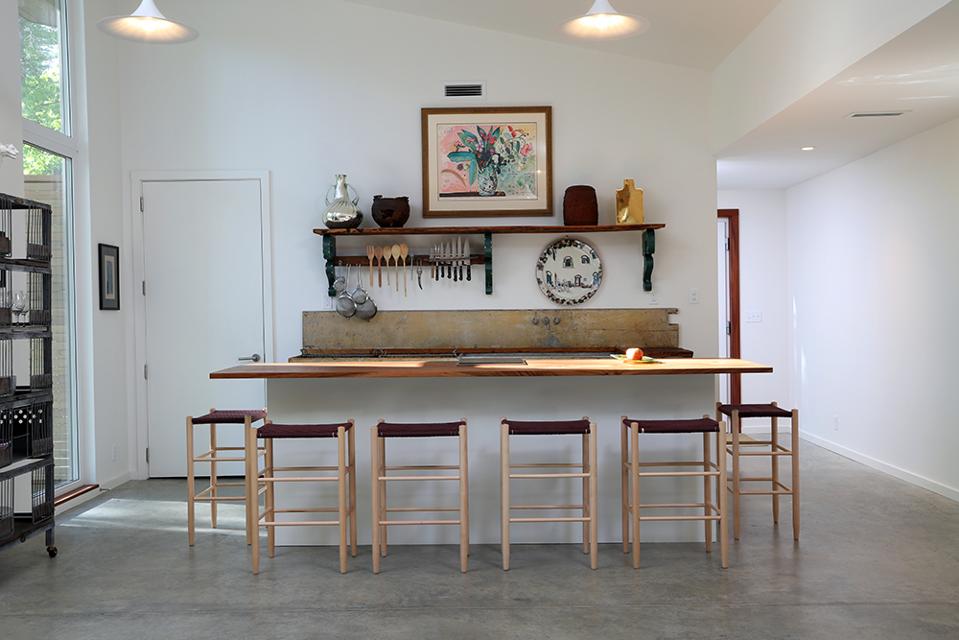 Several of the appliances are in a utility room behind this sparse kitchen. Components of the … [+] kitchen were hand-cut by a carpenter while stools were made by a local craftsman.

PHOTO COURTESY OF RANDY O’ROURKE FOR DOWNSIZE: LIVING LARGE IN A SMALL HOUSE

Tom had had some experience in the building trades, so he decided to pull together a crew and build the house himself. He formed a small construction company, and hired Bernie Plonski, a 70-year-old, highly experienced carpenter/contractor. The house was completed in a year. Tom says Bernie understood exactly what he was trying to achieve and could build almost anything (and on budget). At his age, Bernie appreciated the fact that it was a low one-level design suited for this stage in his career. 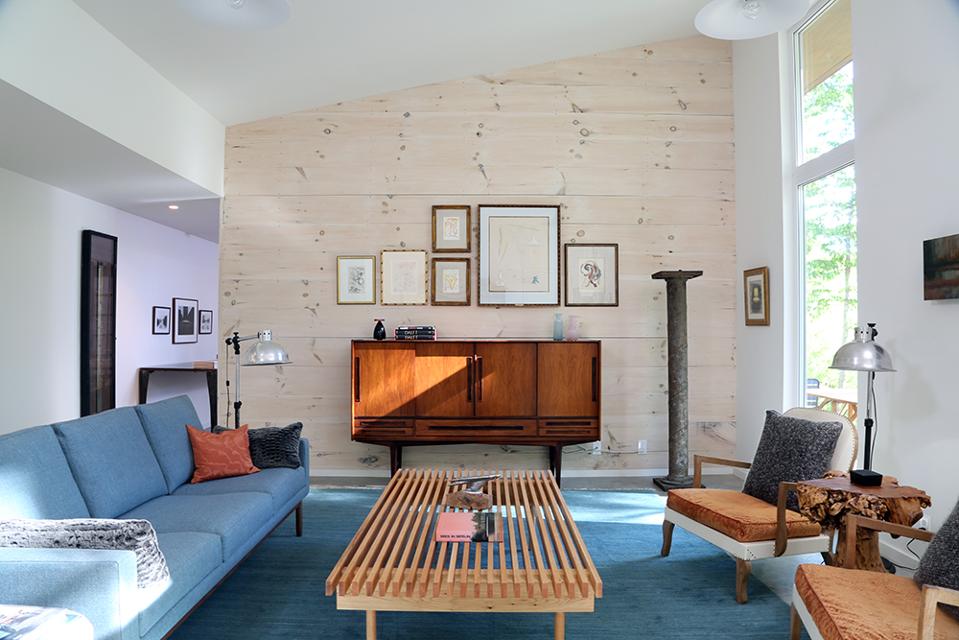 The living air is open and airy with high ceilings and access to the outside.

PHOTO COURTESY OF RANDY O’ROURKE FOR DOWNSIZE: LIVING LARGE IN A SMALL HOUSE

Tom knew he wanted to live a simpler life in a home that was less expensive to operate and one that would allow him to age in place. After years as an “active consumer,” Tom’s large house and barn had become his own “personal museum of too much, mostly duplicate, and not very valuable stuff.” When his house sold quickly, he realized he had to dispose of things in a hurry. With his new house under construction, Tom proceeded to make piles of possessions by category: furnishings, clothing, sporting equipment, books, photographs, and so on. The first elimination was easy, but there was still plenty left that he initially considered essential. He got rid of many of his business suits and ties, and any other clothing that he hadn’t worn in the last year. Once he got going, he says, “It felt like a cleansing experience in preparation for a new life that required less baggage.” 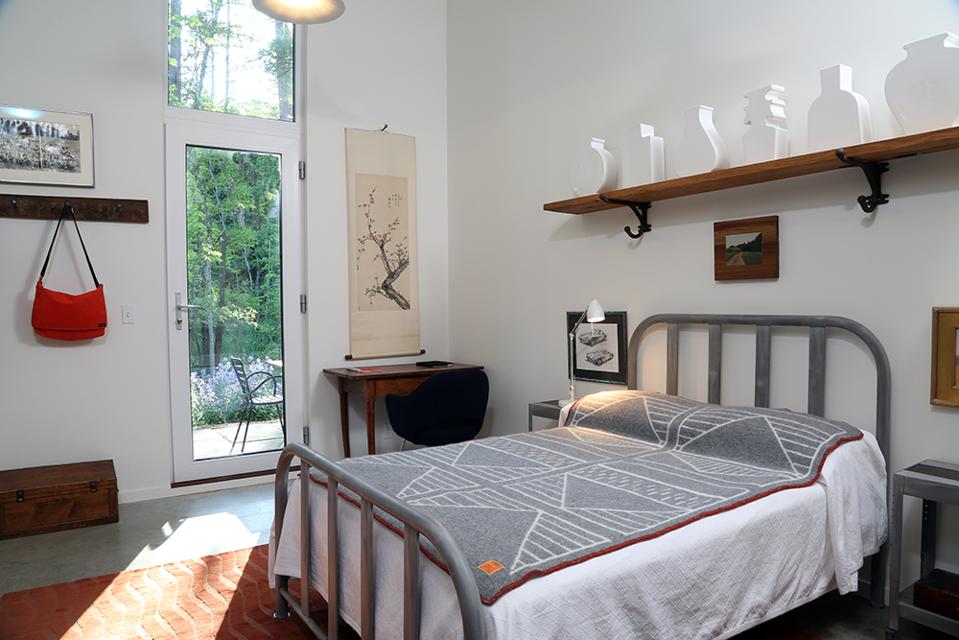 The bedroom is light and open with high ceilings The shelf over the bed is from 300-year-old wood, … [+] held up by large metal barn saddle hooks.

Photo courtesy of Randy O’Rourke for Downsize: Living Large In A Small House

In today’s society, a lot of people feel that more is more. However, when building a house, more means more construction expense, more to clean, more to maintain, and more money spent on ener- gy. And in many cases, people don’t need all of the space that they opt to build. Many homeowners report that living with less is liberating, as Tom has expressed with his new home. He owns 6 wooded acres and could have built a much larger house but decided to build just what he needed, minimizing his construction and upkeep costs. 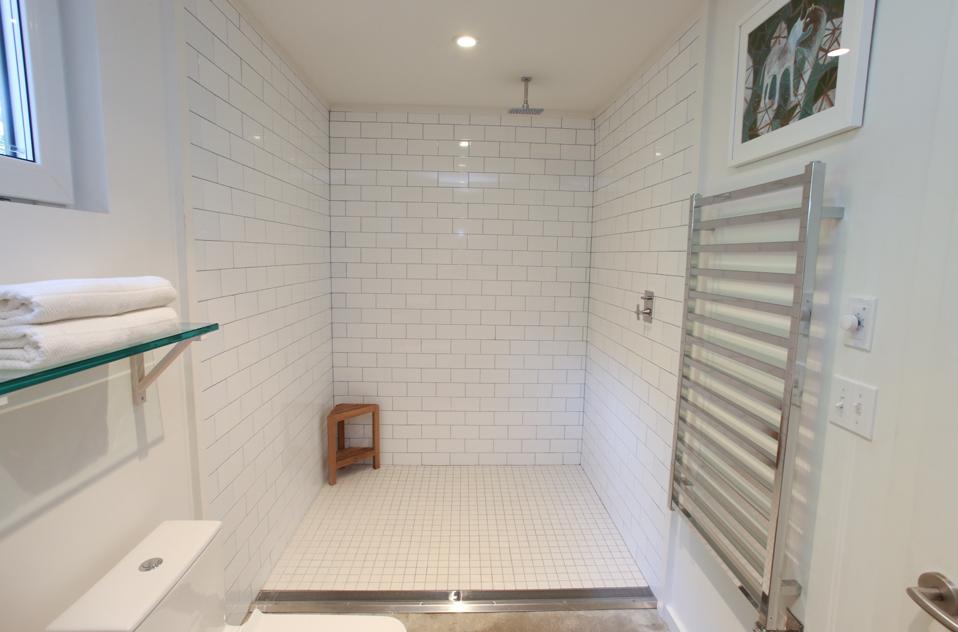 The shower is rimless making it easily accessible so this house can be a “forever” home.

Photo courtesy of Randy O’Rourke for Downsize: Living Large In A Small HouseSource

Can A ‘Crowdsourcing’ Approach Make The American Weather Model Best In The World?

How Apple ‘Intercepts’ And Reads Emails When It...

An Insider’s Guide to Finding the Right Advertising...