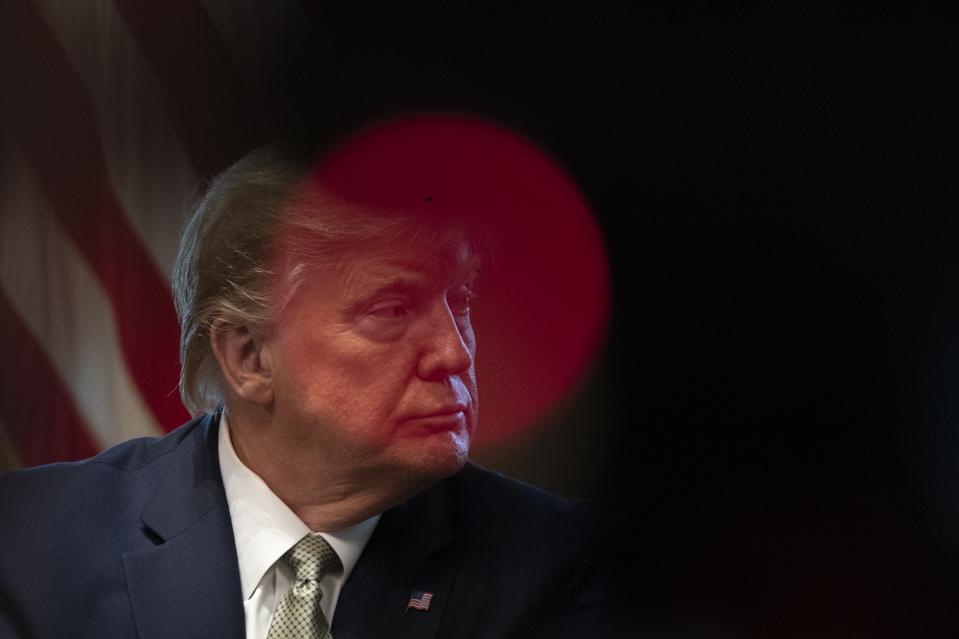 WASHINGTON, DC – MARCH 17: U.S. President Donald Trump leads a meeting with travel and tourism … [+] industry executives to discuss economic response to the coronavirus outbreak in the Cabinet Room of the White House on March 17, 2020 in Washington, DC. The Trump administration is considering an $850 billion stimulus package to counter the economic fallout as the coronavirus spreads. (Photo by Drew Angerer/Getty Images)

It seems the Trump administration’s chickens have come home to roost regarding their attempts to deter the 2020 Affordable Care Act (ACA) enrollment in November and December of last year. According to a spokeswoman for the Centers for Medicare and Medicaid Services (CMS), “CMS is evaluating offering a special enrollment period specifically designated for COVID-19.”

As the unemployment rate has spiked in response to the COVID-19 pandemic and millions of American businesses having to shutter their doors many Americans are finding themselves potentially without their employer provided coverage. While jobs numbers will not be available until April, early predictions differ wildly ranging anywhere from 500,000 to upwards of 5 million. This increase in the unemployment rate coupled with the nearly 30 million Americans who are already uninsured not only speaks directly to weaknesses in the American healthcare system, it also threatens to further ignite the public health powder keg that is COVID-19 if not immediately addressed.

A number of states and health insurers are pressing the Trump administration and the federal government to reopen ACA enrollment, stating “The American people need the peace of mind of knowing that their health and financial futures are secure. That means knowing that they can count on their health care coverage when they need it most.” In a letter to the House and Senate, going on to outline the need for coverage to be affording stating, “Congress should create new funding to support coverage for those who lose their jobs due to the crisis, by providing a 90% subsidy for COBRA or other insurance coverage.”

As COVID-19 cases increase in the US insurers are quaking at the potential cost of covering such an influx of patients at one time. “Establish a temporary, emergency risk mitigation program to ensure that health care premiums do not spike, and that benefits are stable in the future.” The letter goes on to implore, “Health insurance providers are covering COVID-19 tests and needed treatments. As more people seek coverage and care due to this pandemic, this temporary, emergency program would protect Americans from the consequences of potentially catastrophic costs. This should be structured as a backstop contingency program that is triggered only if real-world health insurer costs are significantly higher than expected.”

The letter also goes on to advocate for emergency funding to hospitals, support for independent health care providers, and enhanced funding for testing and treatment of COVID-19-related conditions for the uninsured.

“We will continue to work with states and health plans around the country to assess what additional actions are necessary to ensure the American people have coverage for, and access to, the services they need at this time.” Said the CMS spokeswoman. While around nine states are currently able to run their own exchange, 32 states rely exclusively on the federal exchange through healthcare.gov and are dependent of the federal government to open a special enrollment period so they can expand coverage.

8.3 million Americans signed up for ACA coverage in 2020 despite the Trump administration’s repeated attempts to undermine enrollment for which they employed three distinct tactics;

In addition to all of these deterrents, the Trump administration has worked to kill ACA in other ways including; the inclusion of  “skinny plans,” which cost less, but have consumers paying more with notoriously high deductibles and lack consumer protections (which could further cripple the US economic growth after the COVID-19 crash), has supported work requirements pursued by some states for Medicaid coverage (which have repeatedly been blocked by the courts), and has supported various ongoing court cases against ACA (one of which will be heard by the Supreme Court in the coming months).

The COVID-19 pandemic will undoubtably hit the American healthcare system hard in a variety of ways. The concern now (among many) is not only how to keep Americans who contract COVID-19 alive, but how to insure that they do not go into untenable medical debt in the process. The extreme need for the opening of a special enrollment period for ACA seems like just another instance of the federal government continuing to chase what is now the runaway boulder that is the COVID-19 pandemic in the US.

Startup Founder Mental Health: Why It Matters And...