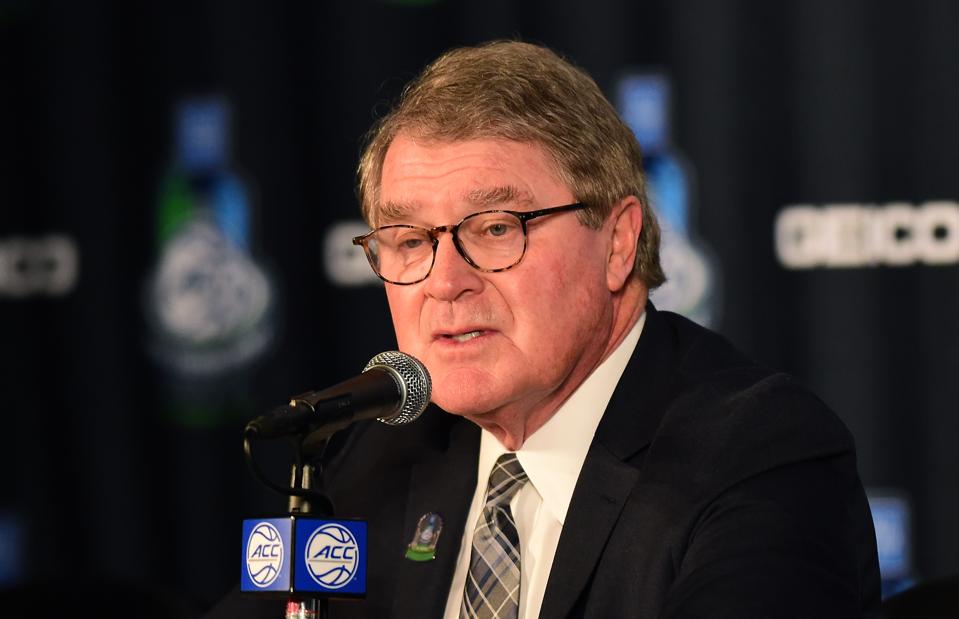 GREENSBORO, NORTH CAROLINA – MARCH 12: ACC Commissioner John Swofford speaks with the media prior to … [+] the quarterfinals round of the 2020 Men’s ACC Basketball Tournament at Greensboro Coliseum on March 12, 2020 in Greensboro, North Carolina. Swofford addressed the Coronavirus (COVID-19) and the impact it will have on the remainder of the ACC Tournament. (Photo by Jared C. Tilton/Getty Images)

Nearly a quarter century ago, when he was hired to succeed the legendary Gene Corrigan as Atlantic Coast Conference commissioner, Swofford made the difficult decision to leave his alma mater, North Carolina. Swofford had been a starting quarterback and defensive back on the Tar Heels’ football teams, winning an ACC championship in 1971, and later served 17 years as its athletic director.

When Swofford made the leap to the Greensboro, N.C., offices of the ACC in April 1997, Hall of Fame coach Dean Smith had just made his 11th trip to the men’s basketball Final Four. Six months later, on the eve of fall practice, Smith shocked the sports world by retiring.

Two months after that, Mack Brown, the charismatic young coach Swofford plucked from Tulane a decade earlier to resurrect the UNC football program, bolted for a megadeal from the University of Texas. Brown had just led the Tar Heels to back-to-back top-10 finishes in the AP poll.

Six coaches later, including Brown’s comeback in 2019, the Tar Heels have yet to reclaim such lofty heights on the football field.

Then came Thursday morning and Swofford’s announcement he would retire next spring after completing his 24th year as ACC commissioner. Now 71, Swofford will be exiting the stage just as the NCAA and his fellow conference honchos, with a not-so-subtle push from state legislatures, attempt to implement a system for student-athletes to profit from their name, image and likeness.

He will be leaving that headache for someone else.

Swofford, the longest-tenured commissioner and just the fourth overall in the league’s 67 years of operation, said in a statement that he and his wife Nora had been planning “for some time” that this next cycle would be his final year on the job. The worst pandemic in a century likely made that timeline all the more desirable.

Not surprisingly for such a skilled administrator and gifted politician, Swofford’s achievements are many. 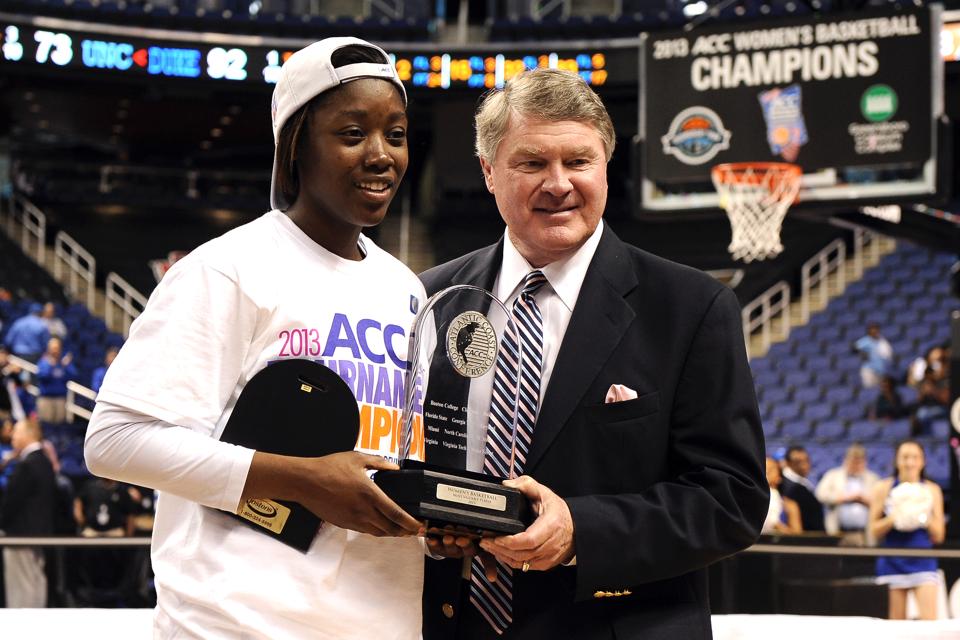 GREENSBORO, NC – MARCH 10: Alexis Jones #2 of the Duke Blue Devils poses for a photo with John … [+] Swofford, Commissioner of the Atlantic Coast Conference, following their 92-73 victory against the North Carolina Tar Heels during the finals of the 2013 Women’s ACC Tournament at the Greensboro Coliseum on March 10, 2013 in Greensboro, North Carolina. Jones was awarded the tournament most valuable player award. (Photo by Lance King/Getty Images)

During his tenure, the regional league of his North Wilkesboro, N.C., youth has grown from nine member institutions to a 15-school national powerhouse. It has expanded its footprint throughout the eastern seaboard, from Miami to Boston College, and since 2014 it has counted Notre Dame as a full member in every sport but football (partial schedule) and hockey.

Losing original member Maryland to the Big Ten left a scar, but Swofford was able to shepherd the ACC through unprecedented conference upheaval and bring it through the storm.

“John has been the bedrock of the ACC,” Clemson AD Dan Radakovich said in a statement.

Since the four-team College Football Playoff began in 2014, with Swofford as one of its founding fathers, the ACC has been part of the festivities every year. Florida State made it in 2014 and Clemson has qualified in each of the past five years, winning two CFP national titles. 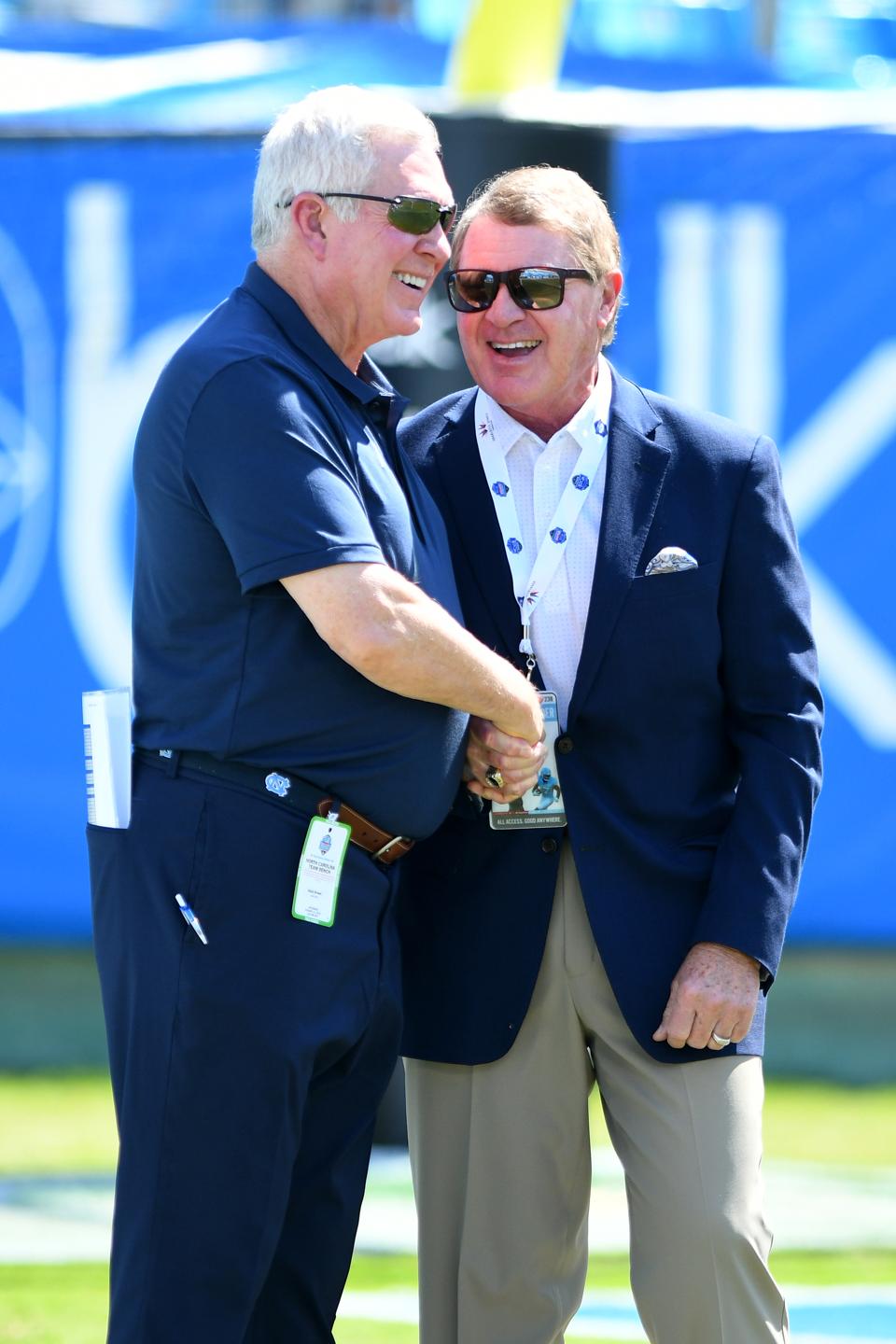 In 23 years under Swofford’s leadership, the ACC has won national titles in 19 of 27 varsity sports. That’s a total of 92 national team titles.

All that across-the-board success made it possible for the ACC Network to launch last August in a partnership with ESPN.

Under Swofford, the ACC men’s basketball tournament went to Brooklyn twice and to Tampa as well. He helped get the ACC/Big Ten Challenge off the ground for both men’s and women’s basketball, oversaw the creation of a league championship game for football, hired the league’s first full-time women’s basketball administrator, started the ACC Student-Athlete Advisory Committee and launched an annual league summit for mental health and wellness.

Taken together, it has been a remarkable run.

Having a rare instinct for proper timing doesn’t hurt either.

Will the Trump Administration’s Coronavirus Testing Snafus Be...

After ‘The Irishman’ Oscar Debacle,Where Does Netflix Go...