Breaking
Redesigning The Talent Experience For The Future Of...
Seven Ways To Thrive As A Remote-First Team
Five Ways To Network In 2020
Deckers Outdoor Stock Still Attractive At $258?
Save $50 Off A Fitbit Sense With This...
Meet Jordan Wise & Hamish Stephenson: The Founders...
Google Plex: The Mobile Banking App Every Bank...
Future Of Intimacy: Sex Bots, Virtual Reality, And...
How to Create the Best Facebook Cover Photos...
How To Continue Working Remotely Even If Your...
Apple Dominates Microsoft In MacBook Pro Vs Surface...
Do You Know If You’re Prepared For Retirement?
Law Professor Argues Opportunity Zone Program Is Harmful
The Amazfit GTS 2 Mini May Be One...
Hotelier/ Billionaire Philanthropist Jonathan Tisch: What A Hospitality...
More Entrepreneurship, Less Recidivism Among The Formerly Incarcerated
Home General According To A New Study, Patients Are Texting, Smoking, Or Tweeting During Appointments
General

According To A New Study, Patients Are Texting, Smoking, Or Tweeting During Appointments 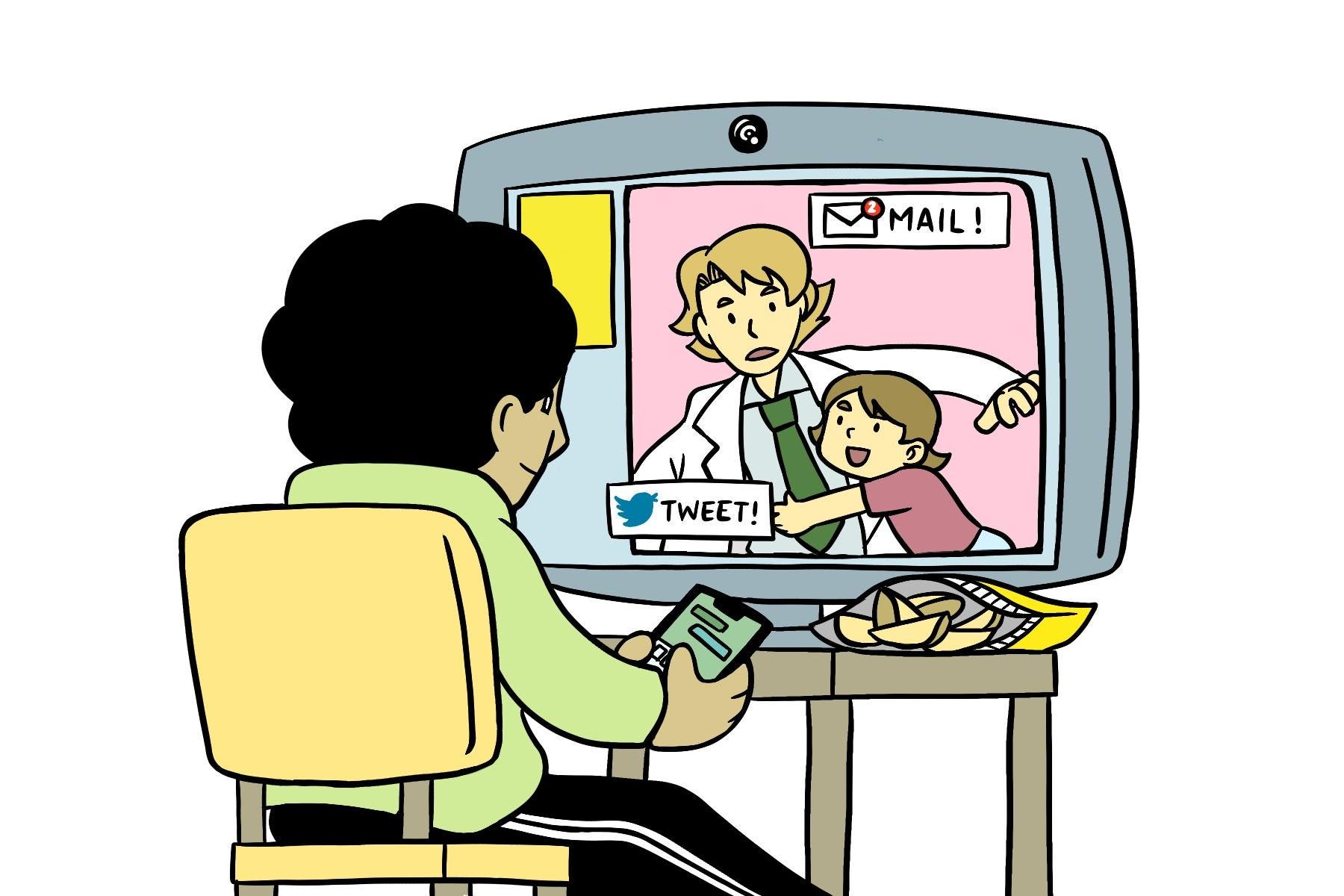 Marie Shanley, who is also known as Mxiety on the Twitch Mental Health Talk Show she hosts, has enjoyed the transition to telehealth for her therapy appointments because she doesn’t have to leave her house and has a place where she feels safe opening up. However, she explains, she has also found herself distracted and pulled to multitask. Notifications on apps on her phone, open internet windows, and even her smartwatch notifications can all pull her attention. Recently, she was talking to someone on twitter about politics and had an unread message when she realized it was time for therapy. She closed everything down except the browser with twitter and kept it up behind her therapy window. Throughout her session, even though she felt deeply involved in the work of her therapy, she would catch herself as her hand would get close to the mouse, tempted to click and read the unread message. She says, “I had to actively remind myself that I was supposed to be in the session (and was paying for it too), so browsing the internet would not be as beneficial as paying attention and yet the call was strong…It feels very much like a habit.”

Marie is not alone. DrFirst surveyed 1,000 Americans over the age of 18 and found that while 44% of them have now used telehealth services during the pandemic, including 25% for therapy, 73% of men and 39% of women reported multitasking during their visits. The types of distractions were varied with the most common being surfing the web, checking e-mail, or checking texts (24.5%), watching the news, TV, or a movie (24%), scrolling through social media (21%), eating a snack or meal (21%), and playing a video game (19%). Respondents also indicated doing telehealth appointments with their doctor while smoking a cigarette (11%), drinking an alcoholic beverage (9.4%), or driving (10%). One could hardly imagine any patient smoking in a doctor’s office openly in person, though it does perhaps give a bigger picture of a person in context.

Dr. Nancy Stewart, Assistant Professor of Medicine at the University of Kansas Medical Center, Division of Pulmonary, Critical Care, and Sleep Medicine, says that she has noticed many of these distractions in her medical visits and has seen patients who have been driving, working, or cooking during appointments. She says she has had to, in several situations, request that the patient pull over or stop what they are doing so they could finish the visit without distraction. Most patients, she says, are receptive to this and apologize. Dr. Jose Vito, Child and Adolescent Psychiatrist and Clinical Assistant Professor at NYU School of Medicine, has found in his child and adolescent patients they are also more distracted as they have been home with access to their electronic devices and report being “bored with more free time.”

But, the ping of the cell phone or the smoking of a cigarette might only be compounding a patients already challenged attention span. Just try to imagine that you are depressed and hopeless and have been struggling with sleep. You could have a drug or alcohol craving as part of your substance use disorder or you might be distracted by a newly acquired gaming, gambling, or other pandemic enabled behavioral addiction. Even still, you might be anxious about real life problems during Covid-19 and easily distracted or, have an actual attention deficit disorder. Then, you add in the distraction of doing a visit from home, with family members around, and any other noises and internet disruptions that can occur and it is simply not surprising focusing is so hard.

But, patients are not the only ones who are distracted by telehealth and easy access to technology. Dr. Angela Weyand, Assistant Professor of Pediatric Hematology at the University of Michigan School of Medicine, explains that she feels while she is doing video visit she has notifications constantly going off and that can feel very distracting. She says that her phone is actually near her due to the technology change and, instead of a knock at the door, she is getting texts from administrative staff about the next patient while in the current visit. She says this happens often as, for example, the next patient is having technical difficulties. She explains, “I am constantly feeling like a million things are distracting me from our conversation.” Yet, as Dr. Colin Banas, Chief Medical Officer at DrFirst adds, “Nothing is more important to a doctor than focusing on the patient, yet distractions can still be a challenge…Doctors understand that lapses in attention can lead to errors, and are well practiced at staying in the moment with their patient.”

Therapists also report a pull to do other things during their visits. Dr. Kathryn Gordon, Licensed Clinical Psychologist in North Dakota, says that she has noticed she has urges to check Twitter, e-mail, or even the news during sessions. She feels that it is a somewhat conditioned response for her to using her home computer, which she typically uses for those activities. She feels especially pulled to do this when there is breaking news or a new development that day. She has also noticed an urge to Google something during a session that either she or a patient is not sure of, and this is something she would never have the urge to do in the room with a patient as it would be disruptive. Sarah Isaacs, a Mental Health Counselor in North Carolina, similarly has felt the urge to look at context for a therapeutic conversation, like looking at the latest polls when a client is talking about the election, for example. She says, “I realize this is as much about my own anxiety as theirs.”

To try to focus (and do their job or get their money’s worth!), patients and doctors both report techniques to minimize distraction including trying to close all the windows on their computer and putting their phone outside of their reach. Dr. Gordon explains, “It’s not that hard to resist checking social media or other things during session, it is just that it’s an automatic behavior. Taking…action…make[s] me more aware and conscious of my behaviors so that I can stop them— as does the thought of my patient feeling like I’m not listening to them or fully paying attention to what they say!” Marie explains that she will put her phone on silent and close everything except for Zoom, including taking off her smart watch so she doesn’t get notifications on that either. In fact, she adds, she sometimes will just use her phone for therapy because it makes multitasking much harder. Somewhat similarly, Dr. Weyand has switched to using a pager instead of her cell phone, because even if it is more distracting, it feels more understandable to patients that she is responding to work and not just texting friends.

Sarah says she has turned off every notification she has on her laptop (from Outlook mail to CNN) and she has also switched to having a notebook and pen in hand. She feels this change keeps her from being available to check anything on the computer and even though she hasn’t written by hand since she was an intern, she is anchored in the session instead of her mind wandering in her house with her newborn, her husband downstairs, and her 2 cats around. She says, “having the notebook seems to signal to me, even in my bedroom, ‘OK. We’re doing therapy now.’ ” Jelena Lazarevič, a communications professional and graphic designer, has noticed something similar as a patient. She started bringing a notebook to her appointments after her second session when she felt she wanted to take notes, but also felt distracted by her cell phone notifications. Having the notebook has helped focus her in session and allowed her to actively listen and think about the “a-ha moments” to copy down.

Additionally, the way time is managed seems to help with distractions. Jelena has noticed that if she stops work and other tasks and takes 10-15 minutes before her therapy appointment, it helps her shift her mindset to being in therapy. She says she treats it as “travel time” to “ remind myself of my goals in therapy and that the time I spend with my therapist is really development time for me and not just another conference call.” For his patients, Dr. Vito has found it helpful to structure therapy sessions and come up with an agenda at the beginning with the patient for what they want to accomplish in their time together (ie. what coping skills to learn when they are anxious). Dr. Stewart notes that if she sees a patient distracted or doing something else at the beginning of a visit, she has started to say, “Is now a good time?” She feels this gives them a subtle nudge to take time out and focus on the visit.

And, true to form for the therapists, distraction is definitely something that can then be brought into the room and talked about in therapy. Sarah says that when her clients are distracted, she feels it “gives me an opening to talk about the ways in which our attention is currently divided and how that wears on a person.” Dr. Gordon adds that sometimes if patients get a text, e-mail, or other notification in session it ends up prompting them to discuss something on their mind in real time.

Ultimately, of course, if no one brings it up, or the next time someone on either side of the conversation asks you to repeat something, you do have to wonder….what were they doing instead?