Breaking
Florida Supreme Court Tells The American Bar Association...
How to Write Perfect Paid Social Media Marketing...
How To Boost Productivity In Your Small IT...
How Restaurants Can Design a More Sustainable Food...
Expenses That Small Business Owners Need to Be...
How You Can Make Saying Goodbye To The...
Biden To Meet Royal Family At Cornwall’s Eden...
It’s Going To Be Emotional — Going International...
Peer Mentoring For Students: STEM & Buds
7 PR Trends in 2021: The Story So...
Google Plans Radical New Google Pixel Smartphone Upgrade
Where Did COVID Come From?
Ride To Growth With A Business Vehicle
C3.ai’s Tom Siebel: How To Scale AI
Moz Acquired by iContact Marketing Corp
10 Examples of Brands Using TikTok Stitch and...
Home Business Acer’s Revenues Bounce Back As More People Work And Study From Home In Coronavirus Crisis
Business 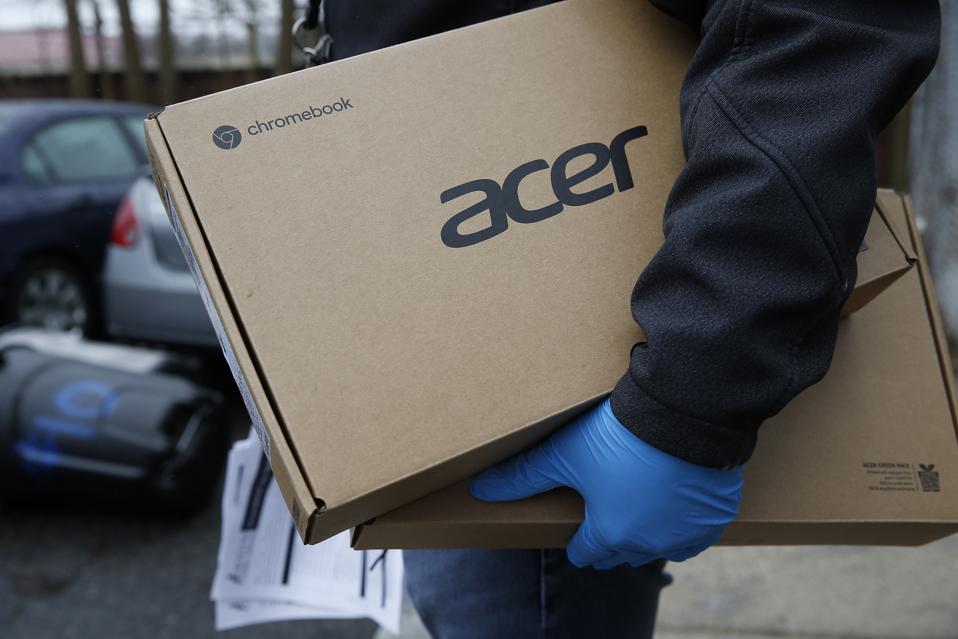 Boston Public Schools employee Giscar Centeio holds two laptops as he does a dry run going door to … [+] door handing out Acer chromebooks to students in Boston on March 19, 2020. Students have to do classwork from home now that all Massachusetts schools have closed to stop the spread of coronavirus.

Taiwan’s Acer, the fifth-largest computer maker in the world, stumbled in February, like a lot of Asian companies, because the coronavirus halted factory work in China. Acer’s February revenue of $373.8 million fell 17.1% from January and 22.4% from February 2019.

“The revenues reflected the coronavirus’ impact on supply chains, which are still recovering and are expected to return to normal by middle of the second quarter,” the company explained in its revenue report.

Since February, the coronavirus has rapidly spread beyond China, so it’s easy to imagine Acer had it even worse in March. People around the world either can’t shop because stores are closed or because consumers are less likely to make big purchases in this uncertain economic climate.

Imagine again. On Thursday, Acer reported its March revenues, which shot up 114.3% over February to about $800 million. That’s also up 2.2% from March last year.

Acer credits the jump to the rise in demand for devices that help work, study and play at home—a new lifestyle in this coronavirus crisis. “We have seen increased demands in certain product lines due to online learning and work-from-home needs, including notebook PCs, Chromebooks, monitors, and others,” says an Acer spokesperson. “We are doing our best to fulfill them.”

The coronavirus pandemic has roiled consumer markets in general, but isolation measures that require remote work and study “have driven sales of commercial notebooks and mainstream laptops,” says Pan Chien-kuang, a senior analyst at Market Intelligence & Consulting Institute in Taipei.

Acer’s long-standing focus on making Google Chromebooks—laptops that are already popular in American schools—helped it secure that boost in March, industry analysts say. Global Chromebook sales reached an estimated 10.1 million units in 2019, according to Statista, up from 8.9 million the previous year. Acer, together with Samsung, was the first to start selling the cloud-based PCs in 2011. By 2017, it had the largest market share in the world for Chromebooks, topping rivals Fujitsu and Lenovo. 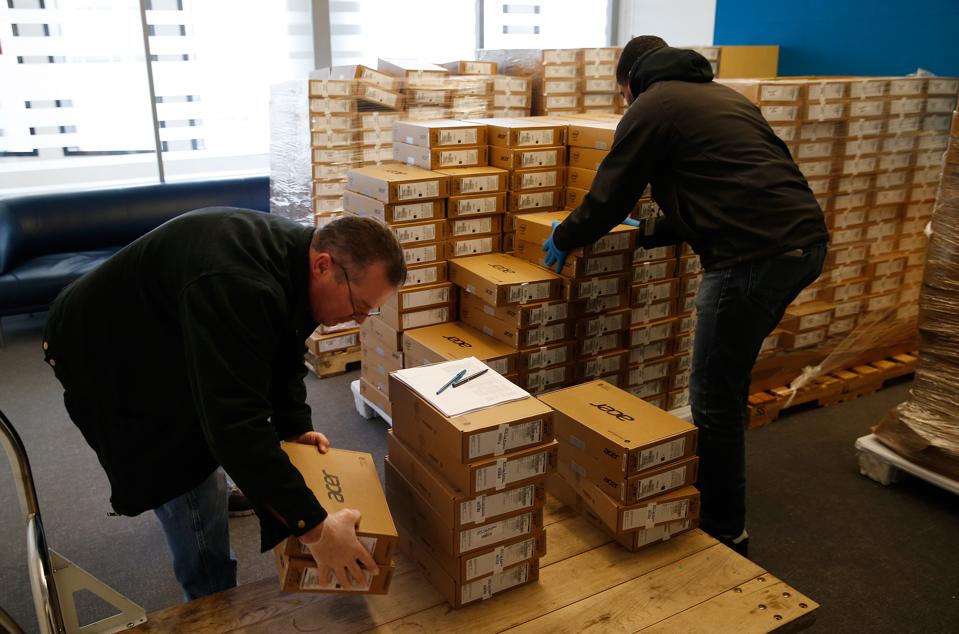 Boston Public Schools employees load computers onto a dolly as BPS does a dry run going door to door … [+] handing out chromebooks to students in Boston on March 19, 2020. Students have to do classwork from home now that all Massachusetts schools have closed to stop the spread of coronavirus.

“Chromebooks have been doing extremely well in the U.S. given the number of students doing remote learning now,” says Linn Huang, research vice president at IDC. “We’re also hearing of newly remote workers picking up Chromebooks for the home as well. Acer absolutely is a major player in this space.”

Expect this boom to last through the second quarter of 2020, Huang says.

More traditional notebooks as well as gaming PCs help Acer, too, analysts say. Jason Chen, CEO of Acer, told Forbes in 2018 that gaming units made up a high-teen share of gross margins. The idea is that gaming is a source of entertainment for people stuck indoors.

More on Forbes: Meet The Man Who Reversed The Fortunes Of No. 5-Ranked PC Brand Acer

“I believe gaming devices can sell much better than others this year,” says Brady Wang, an analyst in Taipei with Counterpoint Research.

Accordingly, next month Acer says it will release Nitro 5 gaming notebooks for $750. It says this device shows that PCs in its class “don’t need to break the bank.”

But late 2020 could be harder for Acer, even if COVID-19 cases taper off and people go back to work after lockdowns, analysts caution. They say a lasting slump in demand, the result of social-distancing rules and poor consumer confidence in places with high unemployment, will hit PCs like a lot of other goods.

“With the further spread of COVID-19 from China to North American and European markets, we shall see demand-side problems because people may decide not to or postpone purchasing of new electronics,” says Counterpoint Research’s Wang. “The increasing economic uncertainty and reducing social interaction will cause weak demand.”

Supply chain disruptions could resurface this quarter, notes IDC’s Huang, and by the time they resolve, the world could be in recession. “The ‘at home’ bump is material and will produce long-standing positive impact on the consumer markets, but back half 2020 is likely to get tough,” he says.

Forbes Asia Tracker: How The Region’s Tycoons, Entrepreneurs And Businesses Are Combating The Coronavirus