Breaking
ESBC Major Updates: Tons Of Heavyweight Greats Added...
5 On-Demand Courses To Help Develop Your Leadership...
How to Run Nonprofit Marketing Ads
Entrepreneurs Are Bringing Transparency To Home Buying And...
Best Incentive To Get Vaccinated: Money, Messaging, Or...
Page Level Query Analysis at Scale with Google...
How A CIO Can Align IT With Business...
Blogger of the Month: Jo, Girl Eats World
6 Things Women In Business Know That Men...
How to Use First-Party Data for Ad Personalization
Pressing Reset—Putting A Fallen Unicorn Back On Its...
How We Went Viral: Promoting Content with Influencers,...
Blame Olympic Record Price Tag For Return To...
Apple iOS 14.5 Release: Should You Upgrade?
How to Come up with Podcast Topics and...
Why Gaming Gear Company Razer Launched A $50...
Home Business Adam Silver Optimistic But The NBA Still Has A Problem In China
Business 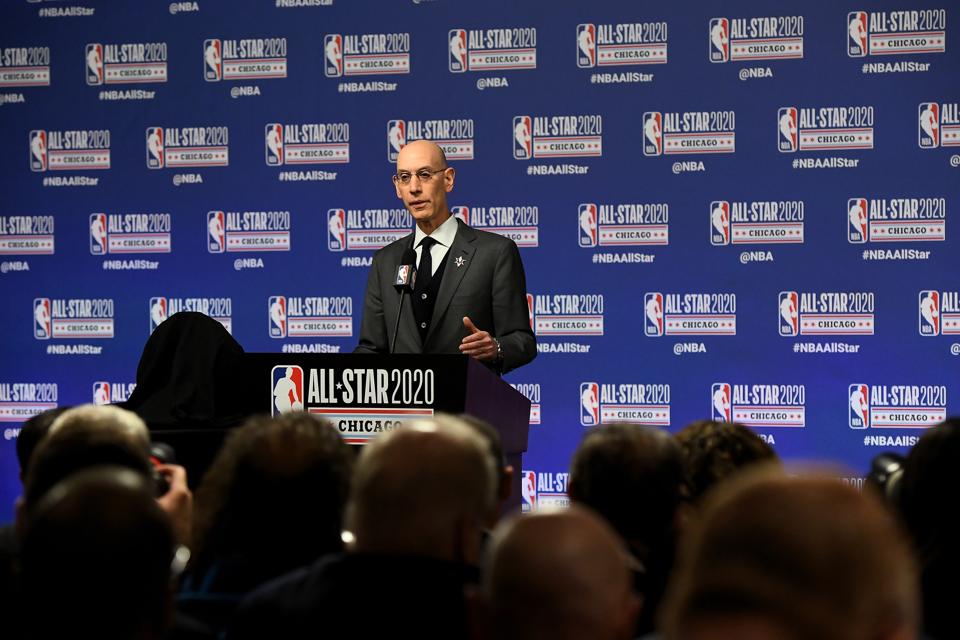 CHICAGO, ILLINOIS – FEBRUARY 15: NBA Commissioner Adam Silver speaks to the media during a press … [+] conference at the United Center on February 15, 2020 in Chicago, Illinois. NOTE TO USER: User expressly acknowledges and agrees that, by downloading and or using this photograph, User is consenting to the terms and conditions of the Getty Images License Agreement. (Photo by Stacy Revere/Getty Images)

In October, when Rockets general manager Daryl Morey sent a tweet supporting protestors in Hong Kong and set off firestorms both international and domestic, there were estimates postulating that the NBA could lose in the range of a billion dollars. The Chinese government was none too pleased, demanded the Rockets fire Morey and pulled the broadcast of NBA games from the state-run network, CCTV.

For a time, the streaming network Tencent stopped showing games, too, a poor start ahead of a five-year, $1.5 billion extension of a partnership first struck in 2015. The extension was signed just two months before the Morey tweet. The games are back online at Tencent, a good thing for the league because 490 million fans were said to have watched games through the site last year.

On Saturday here at the All-Star game in Chicago, NBA Commissioner Adam Silver, whose muddled initial response to the controversy garnered outrage from fans and politicians of all stripes here in the U.S., reeled in some of those early sky-is-falling estimates on losses. While it has been estimated that the league has suffered $150-200 million in lost Chinese revenues, Silver would not be that specific. He was emphatic in saying the league did not lose $1 billion.

“Those were never numbers that were coming from league sources,” Silver said. “Much less. The losses—I mean, we don’t have nearly that kind of revenue in any given season. I think that the magnitude of the loss will be in the hundreds of millions of dollars. Certainly, probably less than $400 million, maybe even less than that.”

Silver said he was not minimizing the damage of that kind of loss. But he appeared to hold out hope that the losses would be temporary, that the controversy over the Chinese tweet would represent a one-time hit. The league’s salary cap is projected to dip this season, but only by $1 million.

“It’s substantial,” Silver said. “I don’t want to run from that. We were taken off the air in China for a period of time, and it caused our many business partners in China to feel it was, therefore, inappropriate to have ongoing relationships with us. But I don’t have any sense that there’s any permanent damage to our business there, and as I’ve said before, we accept the consequences of our system and our values. It’s not a position any business wants to be in, but those are the results. But far lower than whatever those multibillion dollar numbers that you had heard.”

Still A Long Way Back To Normal For NBA, China

Silver sounds optimistic, but that optimism might be misplaced. It’s possible that the NBA’s issue with China melts away in the coming months and the games go back up on television quickly. Once that happens, the NBA and its former Chinese partner companies can pick up as if nothing happened. But it has not happened yet and that’s significant.

“How long this takes, how long this is in place, that is going to determine a lot of this,” said John Wolohan, a professor of sports law in the Falk College of Sport and Human Dynamics at Syracuse University, who travels to China frequently and was in Beijing in December. “CCTV is not broadcasting this year, but if things change next year and the controversy is over, CCTV is broadcasting again, things would get back to normal.”

That’s a great unknown. It’s possible things get worse for the league’s tweet-induced losses in China. A breakdown of some of the key players and events affecting the situation shows why:

This is the sports arm of the state-run television network, which typically shows three or more games per week. As long as CCTV5 is not showing games, there is a signal sent to Chinese companies, many of whom were NBA partners and would like to be again. It’s the same signal the Chinese government sends to its people by keeping the games off official television: watching NBA games is unpatriotic.

“By not having the games on CCTV, you kind of lose the official stamp, if that’s the right image,” Wolohan said. “Everyone could watch the game on CCTV, you don’t have to go online—mom and dad can watch the game with their young children. That’s what was happening, and the game was popular everywhere.”

That could work both ways. There is pressure on CCTV5 to relent and show NBA games, even if there is no official resolution to the situation. As of now, the network can only show Chinese Basketball Association games, which are of obviously lower quality.

“It was one of their biggest, most popular pieces of programming,” Wolohan said. “Without the NBA, they’re limited in what they’ve got. They have the CBA. I don’t want to say second-tier shows but it’s not the NBA.”

Having the NBA shut off from CCTV is a boon for Tencent as those who want to continue to watch the league are forced onto the streaming service. But according to the L.A. Times, there is a Catch-22 for Tencent. Not having games on CCTV might drive usership but it clobbers sponsorship. “Those games,” the paper reported, “are rarely interrupted by advertisements, a telling sign that the NBA sponsors in China who announced their decision to suspend contracts have not returned.”

Worse, there’s a chance that Tencent could back out of the extension of the deal before it kicks in next season. That would count as a billion-dollar blow to the league.

This has not gotten much mention as a factor in the league’s ability to defuse the stalemate over the Morey tweet, but when the league lost Bryant to a tragic helicopter accident, it did not just lose an all-time great player. It lost the game’s greatest international ambassador, especially in the eyes of the Chinese.

“In China, Kobe Bryant was probably the most popular player, even after he retired,” Wolohan said. “He had gone over, the people loved him and he seemed to embrace China. The fact that he is no longer going to be going over is a big loss for the NBA with their relationships there as they try to get back onto CCTV. He was that one person who represented the NBA in the eyes of most Chinese fans.” 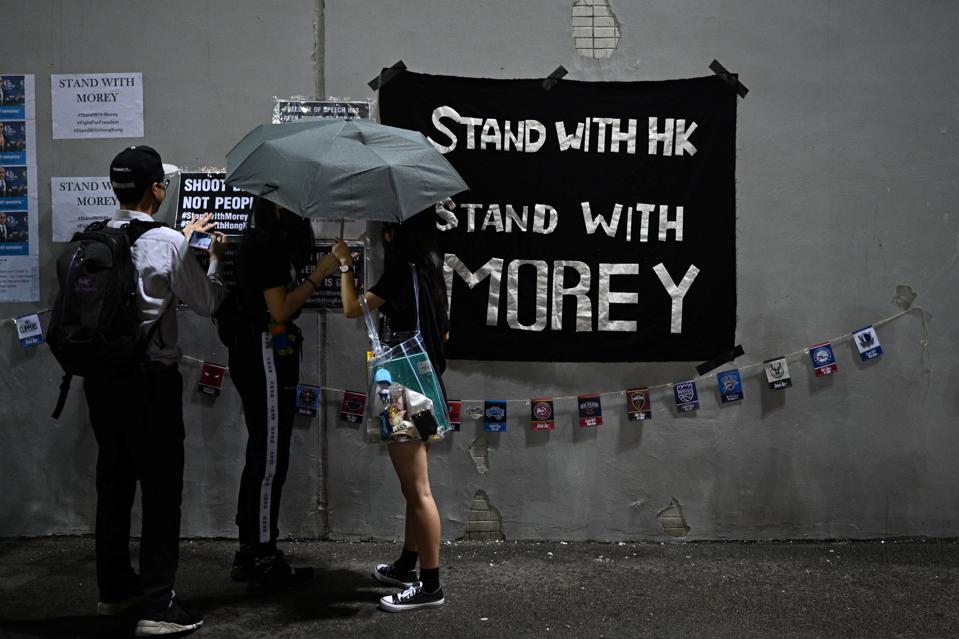 Protesters display posters at the Southorn Playground in Hong Kong on October 15, 2019, during a … [+] rally in support of NBA basketball Rockets general manager Daryl Morey and against comments made by Lakers superstar LeBron James. – US basketball superstar LeBron James on October 14, 2019, has sharply criticised a Houston Rockets executive for angering China with a tweet supporting protesters in Hong Kong, saying the executive was “misinformed” and should have kept his mouth shut. (Photo by Anthony WALLACE / AFP) (Photo by ANTHONY WALLACE/AFP via Getty Images)

There’s a chance that the NBA could luck into an accidental solution to the China mess this spring. That would come if the Houston Rockets flop in the postseason, which is entirely possible—Houston is currently the No. 5 seed and would have to play Utah in the opening round, with the Jazz owning the homecourt advantage.

If the Rockets, after trading for Russell Westbrook and committing to a small-ball style with 6-7 wing Robert Covington at center, crash out of the postseason in the first round, the team could well fire Morey on merit. It’s already assumed that coach Mike D’Antoni, barring a trip to the Finals, will be fired at the end of the season.

Owner Tillman Fertitta might simply sack both and start fresh. To NBA fans, that would be a reasonable act and unrelated to Hong Kong. To the Chinese government, that would be a noteworthy concession. With apologies to Morey, everyone (else) would win.

“The only thing the NBA probably could do is fire Daryl Morey,” Wolohan said. “Have the Rockets get rid of him. That would start to mend the fences. The league has already come out and said they’re not going to force Houston to do anything. Beyond that, I don’t know.”

From the NBA’s perspective, the impasse with the Chinese government is entirely unrelated to the Trump administration’s trade war with China. But in China, there is a link. It’s based on perception more than reality—the perception that the United States is being overly aggressive with China and disrespectful of its sovereignty.

In that environment, it has become more important for the Chinese government to stand strong and save face when dealing with all things America. That includes the NBA. But as tension have eased between the Chinese and American governments, the chances increase that a solution for the league can be found.

“Speaking to people there, they’re not happy with what’s going on over here,” Wolohan said. “This is one example of the U.S. trying to put down and interfere with what China is doing. In some ways, sports and business are separate. But in other ways, it is connected, it’s emblematic of the way the U.S. talks to China.”

Where Have All The Stock Market Bears Gone?