Breaking
The Ultimate Guide to Saving Money
Lights, Camera, Action—Is There A Post-Covid Future For...
7 Ways to Reduce Human Errors in Your...
How ‘Couples Therapy’ Used Technology To Cope With...
Can You Settle Your Student Loans Or Negotiate...
How to Use Amazon Attribution For Ad Campaigns
What are the Makings of a High-Quality Link?
How To Quickly Start And Scale Your Business
Terra Virtua: What NFTs Can Teach Us About...
5 Easy Steps To Prepare Content For E-A-T...
Physical Inactivity Linked To More Severe Covid-19 Infection...
The 2021 Estimated Tax Dilemma: What Tax-Return Pros...
Want To Digitally Transform Your Business? Start With...
How to Optimize Google My Business and Leverage...
Debunking Link Building Myths in 2021
How, When And Where You Can Gaze At...
Home Business Administration Again Selling Tax Shelter For The Top As Middle-Class Relief
Business

Surprise, surprise! The Trump administration plans to cut taxes again for higher-income earners under the guise of a middle-class tax cut. News about the Trump administration’s latest tax idea leaked out on Friday afternoon. Among the ideas floated was creating a new tax-preferred vehicle for savings, in addition to the existing ones, which include 401(k)s and IRAs, “529” college savings accounts, Health Savings Accounts, and more. This is likely a warmed over update of the Universal Savings Account idea floated about a year and half ago. This approach would do nothing to boost retirement savings for middle-class families, but it would give another tax break to higher-income earners.

There is no doubt that families need to save more for retirement. The median retirement balance for families near retirement, those from 55 to 64 years old, who were not yet retired, amounted to $100,000 in 2016, based on the Federal Reserve’s Survey of Consumer Finances. Importantly, this is the typical amount that people had saved if they had any retirement account like a 401(k) or an Individual Retirement Account (IRA). Yet only 60.2% of near-retirees did have an account in 2016. Among all near-retirees, the median amount in retirement accounts was thus a lot lower with only $16,000 in 2016. None of these amounts are enough to supplement Social Security.

The lack of enough savings is also apparent among new retirees. Over the past two decades, the median ratio of total wealth to income, which includes houses, retirement savings and defined-benefit pensions, among new retirees – those 55 to 69 years old who retired within the past five years – has gone down (see figure below). This makes it harder for them to maintain their spending in retirement. This decline is particularly surprising since many people are delaying retirement and working longer. Clearly working longer is not enough to build more savings for retirement. Policy can do more to help. 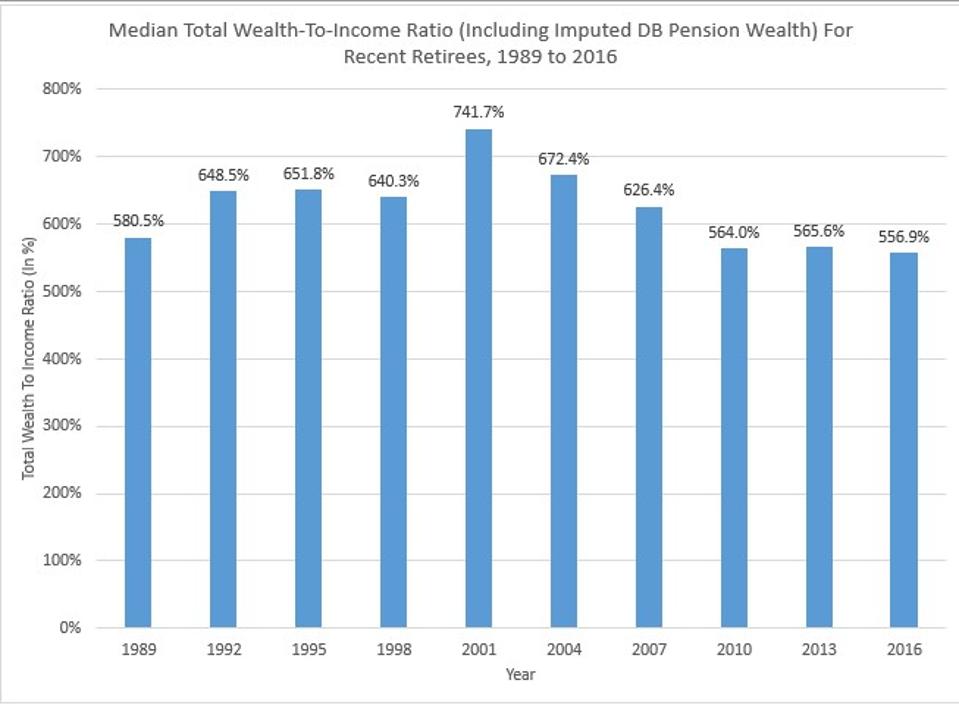 Calculations Based on Federal Reserve, Survey of Consumer Finances

But using tax deductions to get people to save more simply doesn’t work. The tax benefits from this approach depend on somebody’s marginal tax rate – how much they pay in income taxes on their last dollar earned. Higher-income earners have higher marginal tax rates than lower-income ones since the U.S. federal income tax is still progressive. That means that the biggest tax benefit goes to the highest-income people. Yet higher-income earners already have more in savings than lower-income ones. They are not the ones that need the extra help.

Adding more such tax breaks only serves as new tax shelters for higher-income earners. Imagine that this new tax deduction would become law. All households that are maxing out on their tax-preferred savings accounts now have an incentive to shift even more of their savings from taxable savings to untaxed savings in the new vehicle. But most households have nothing to shift from taxable to tax deferred accounts. For the bottom 80% of the income distribution, the median amount of money held in financial assets outside of checking, savings and mutual fund accounts, was a whopping zero in 2016. When highly liquid savings, which families typically reserve for emergencies, are included, the median amount for middle-income families totaled $4,500 in 2016. Low-income and middle-income households wouldn’t even have the savings to take full advantage of this. Only households in the top have enough money outside of already tax-advantaged savings that they could shift into the new accounts.

Put differently, rich households would benefit from the new tax proposal in two ways. They would get a larger benefit per dollar that they shift into the newly tax advantaged savings and they have more money to shift there.

Why focus on tax shifting? In theory, people could save more money if there is a new tax break. But most people don’t have an extra $10,000 per year or anything approaching that amount to save. For instance, a household in the middle of the income distribution with a 401(k) plan contributed a median amount of about 4% of their earnings to that 401(k) plan in 2016. In comparison, by my calculations based on the Federal Reserve’s Survey of Consumer Finances, the additional $10,000 that the Trump administration thinks people can save if they were just given another top heavy tax cut would have equaled more than 20% of total wage income that year. It is hard to imagine how families would quintuple their retirement savings just because of another tax shelter, especially one where the employer doesn’t contribute unlike in a 401(k) plan. This is especially true since only a small share of people actually contributes the maximum amount allowable to their 401(k)s. They could save more money now, if they had the extra income. Similarly, tax advantaged savings for those who do not have a 401(k) plan at work already exist in the form of Individual Retirement Accounts (IRAs). Yet very few people actually use IRAs to put money away on a regular basis, rather than to just roll over an old 401(k) account. Adding yet another tax exempt form of savings that tilts the most tax benefits to the highest-income earners is not going to change that.

The Trump administration’s approach to “middle-class” tax cuts is to shower the wealthy with tax gifts. It will not give lower-income and middle-income families the help they need to better prepare for retirement. Such help could come in the form of higher wages, for instance, from a boost to the minimum wage and by making it easier to join a union. It could also include the expansion or creation of refundable savings credits where everybody would receive the same amount of a federal savings match, regardless of how much or how little they earn. And debt relief such as student loan reduction or outright forgiveness would immediately boost families’ wealth. Real help for middle-class retirement security looks different than what the Trump administration is cooking up. The old-as-new idea of making another $10,000 per year in savings tax exempt will only create a tax shelter for the highest income earners.

Manchester United Must Make Their Move Against Chelsea