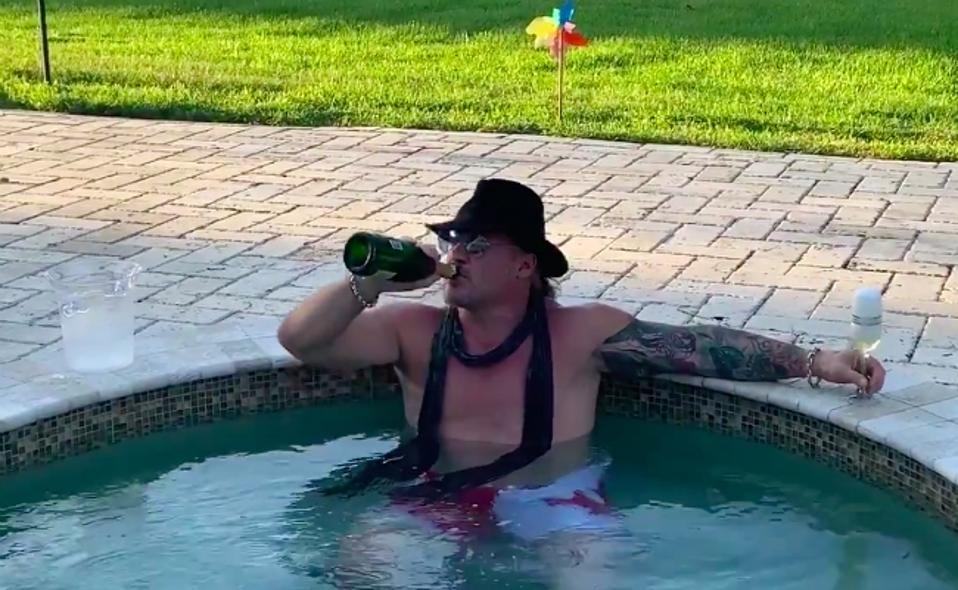 Chris Jericho was featured in a hilarious poolside promo opposite Vanguard 1.

AEW Dynamite aired from an undisclosed location and featured participants in the upcoming TNT Championship tournament competing in tag team action, Chris Jericho recruiting Vanguard 1 and Brodie Lee continuing to take veiled shots at Vince McMahon—this time by flipping out on one of his minions for yawning.

Most Views: THE EXALTED ONE BRODIE LEE LEAVES A WAKE OF DESTRUCTION (895,792 views)

Least Views: DARBY ALLIN REMAINS ONE OF THE HOTTEST WRESTLERS IN AEW (70,007 views)

AEW’s undisclosed location was slightly larger than a shoebox.

Kenny Omega mockingly asked for a hug and Orange Cassidy almost complied before Chuck Taylor held him back. It reminded me of Brick from this scene from Anchorman.

Was Kenny Omega the heel in this match?

This match featured an extremely scary top-rope bump where Kenny Omega landed on the back of his head.

Cody is going on and on about Kenny Omega having a six-match win-streak and being voted the No. 1 Wrestler in the world. He’s an AEW tag team champ & the AAA Mega champion yet he’s nowhere near the TNT Championship tournament which I was told is a main-event caliber belt.

Hikaru Shida has been in a handful of good matches in AEW. This was not one of them.

This match was more about Hikaru Shida vs. Britt Baker than anything.

I just realized this may be the first time Marko Stunt has gone one-on-one with a man of Lance Archer’s size and though it sounds like a diss (it’s not), he could thrive in the “Spike Dudley” role.

When is the dinosaur head going to show up in Brodie Lee’s office?

Just because Syxx got over in WCW WW doesn’t mean the same thing can happen with anybody named after a number.

Can The Dark Order get over if they’re mostly comprised of enhancement talent? Only time will tell.

Chris Jericho Delivers a Message from his Palatial Estate

I thoughtJericho wearing his jeans in the hot tub was pro wrestling comedy at its finest, then he pulled out the miniature Inner Circle t-shirt for Vanguard 1 VTI .

Shawn Spears switched to trunks and I hate them.

I feel like the TNT Championship might be the only thing that can save Shawn Spears at this point but he seems least-likely to win it.

Brandi Rhodes took Sammy Guevara’s phone and if the Sammy Guevara character is as thirsty as he acts on TV, he’ll want to get it back before he winds up in court.

Cody and Darby Allin have the tag team chemistry of the Rock N’ Roll Express circa 2020.

After Controversy, Treasury Confirms Social Security Recipients Don’t Need To File A Tax Return To Get A Stimulus Check

Should Everyone Wear A Mask In Public? Maybe—But It’s Complicated

Ten Lessons The Coronavirus Has Taught Us About...

What Is The Future Of Work In The...