Breaking
Is An Internet Service Provider Revolution On The...
Why Selecting The Right Chairs And Tables For...
Walgreens Stock Looks Attractive At $35
How To Get CEOs And Board Directors Leading...
Bitcoin And Blockchain Are The ‘Future’ Of Twitter,...
COVID-19 Pandemic Has Birds Changing Their Tune
Beat Zoom Fatigue With These 6 Tips
How To Sustain (Or Sabotage) A Customer Service/Experience...
How, When And Where You Can See A...
New $2.2 Trillion Stimulus Bill Proposed—$1,200 Stimulus Checks,...
Why Do We Do What We Do? Manipulating...
California Brand Goes All-American As Amazon Bans Foreign...
The 3 Best Analytics Companies of 2020
Senator Cory Booker: Supporting Small, Minority-Owned Businesses Will...
Trump’s Taxes Are Finally Leaked—What’s Next?
Washington Heats Up Ahead Of First Presidential Debate:...
Home Technology After 24 Years, The Civilian Version Of The Marines’ V-22 Osprey Tiltrotor Is Finally Nearing Takeoff
Technology

After 24 Years, The Civilian Version Of The Marines’ V-22 Osprey Tiltrotor Is Finally Nearing Takeoff

Over lunch in the cafeteria at the North Philadelphia helicopter factory of the Italian aerospace conglomerate Leonardo, test pilot Dan Wells takes dry delight in recounting the confusion the AW609 tiltrotor has caused air traffic controllers.

Flying the experimental nine-passenger aircraft with its propellers tilted forward in airplane mode at a brisk 240 miles per hour toward the airport in El Paso, Texas, the orange jumpsuit-wearing Wells recalls co-pilot Paul Edward asking the tower if they could set it down at the intersection of two runways. “Are you a helicopter?” the controller asked. “Paul says, ‘We will be when we get there.’ ”

An aircraft that can take off and land vertically like a helicopter but fly farther and more quickly like an airplane could be a game changer in civil aviation. The AW609 accomplishes that trick by virtue of twin rotors mounted on huge, swiveling engine pods that look like Popeye’s overblown forearms tacked onto the ends of its wings.

Imagine one-hour travel directly from the downtown Manhattan heliport to Washington, D.C., says AW609 marketing manager Bill Sunick, compared to a 3.5-hour trip on the Amtrak Acela, opening up the possibility for financiers to have a morning meeting in the capital and get back to Wall Street in time for lunch. Or the ability to fly an injured worker from an offshore oil platform at airplane speed to a hospital and land on its helipad. “Time saves money in business,” says Sunick. “Time saves lives in search and rescue and EMS.”

Others are trying to create futuristic electric and hybrid aircraft that can fulfill that mission. According to the consultancy Roland Berger, there are over 90 initiatives under way around the world to develop electric vertical takeoff and landing vehicles intended to enable city dwellers to escape the morass of snarled traffic below. Uber has partnered with a handful of them, including Hyundai Motor and the Toyota-backed, California-based startup Joby, with the aggressive goal of launching an urban air taxi service in 2023.

But the long-delayed AW609, based on a 1980s design, should get there first: Leonardo, a sprawling state-controlled aerospace and defense company with $14 billion in sales in 2018, has begun assembling the first two production versions at its Philadelphia factory, and expects to complete the first this year. When Leonardo starts delivering them to customers depends on when it wins safety certification from the U.S. Federal Aviation Administration, which the company had previously said it expected by the end of 2019. It’s no longer publicly hazarding a guess, but a spokesperson said the company “sees light at the end of the tunnel.”

While takeoff may be imminent, AW609’s sales prospects are less clear. In the early part of the last decade, the company repeatedly said it had 70 orders, but it’s now confirming only two from its launch customer: Era Group, a Houston-area EMS and offshore oil platform helicopter operator, which will take one AW609 configured as a nine-passenger transport and a second configured for medical transport.

Sunick says Leonardo is seeing “tremendous interest” from high net-worth individuals and corporations. Billionaire Michael Bloomberg, a helicopter pilot, reportedly was on the waiting list to buy it in 2012; Sunick said he couldn’t comment and a Bloomberg representative didn’t respond to emailed questions.

Leonardo has yet to finalize a sales price, but says it will fall between $20 million and $30 million depending on configuration and options. That may be a tough sell for cost-sensitive helicopter operators, which can shell out as little as $11 million for a similarly sized rotorcraft.  “You’re paying basically a 2.5X premium over [a helicopter] of the same cabin size,” says Richard Aboulafia, an aerospace consultant with Teal Group. “You have to really want and need the speed and range.”

The AW609 is the culmination of a rocky 25-year effort begun by Boeing and Bell to make a civilian version of the V-22 Osprey, which they developed for the U.S. military. Defense Secretary Dick Cheney tried to kill the V-22 during the George H.W. Bush administration over the program’s high costs. Congress overruled him, in part, because lawmakers believed that fostering tiltrotor technology could lead to a transformation of civil aviation. At the launch announcement for the 609 in 1996, Bell Chairman Webb Joiner billed it as something as revolutionary as “even the very beginnings of manned flight itself.”

Bell and Boeing initially envisioned the 609 as the smallest in a series of tiltrotors that would seat up to 70 people. However, Boeing soon exited the program in 1998 after souring on its commercial helicopter business. To replace Boeing, Bell partnered with the Italian state helicopter company Agusta, a unit of aerospace outfit Finmeccanica. (It changed its name to Leonardo in 2016).

Bell soon became preoccupied with fixing the troubled V-22 after a horrific flight test crash in April 2000 that killed 23 U.S. Marines, followed by another eight months later that claimed four Marines. Developing the 609 took a back seat, and in 2011, Bell sold its stake in the program to Finmeccanica.

The AW609 also suffered a crushing setback in 2015 when a crash during a test flight killed two pilots. Four Leonardo employees are currently on trial in Italy on charges of involuntary manslaughter and negligence in connection to the crash, including former program manager Clive Scott and chief engineer David King.

Leonardo said in a statement: “All AW609 program development and testing activities have been performed in full compliance with national and international rules and procedures.”

Beyond the difficulty of perfecting the technology, the AW609’s progress has been slowed by the higher priority Leonardo put on developing variants of its bestselling helicopter, the medium-size AW139, and the all-new AW169.

Sunick is quick to tout the improvements that Leonardo has made to the AW609’s design since it took sole possession of the program, including more powerful engines, reduced drag, a wider clamshell door to better enable EMS operators to fit a litter through, and a redesigned cockpit with a digital Collins Pro Line Fusion touchscreen system that features moving maps and synthetic vision.

“It’s not your father’s 609,” says Sunick. “We have to do a better job of explaining it’s a different aircraft.”

In airplane mode, the AW609 is designed to mimic the handling and cabin experience of the popular King Air turboprop. Unlike helicopters, the AW609 is pressurized, allowing it to cruise as high as 25,000 feet, smoothly and more efficiently above most weather systems. Leonardo says in cruise it will be about 10 decibels quieter than the average helicopter, with much lower vibration in the cabin.

“You’re not going to be fatigued from the trip,” says Wells, a former U.S. military test pilot who began working on the AW609 at Bell in 2011.

To manage the vastly different handling characteristics and control mechanisms between helicopter and airplane modes, the AW609 has sophisticated “fly-by-wire” computerized flight controls that automatically stabilize the aircraft.

Wells says the augmentation makes it easy to fly. “Don’t tell the boss,” he quips. The AW609 has helicopter-style controls, but the pilot moves them the same way whether the aircraft is in airplane or helicopter configuration — the software does the rest. 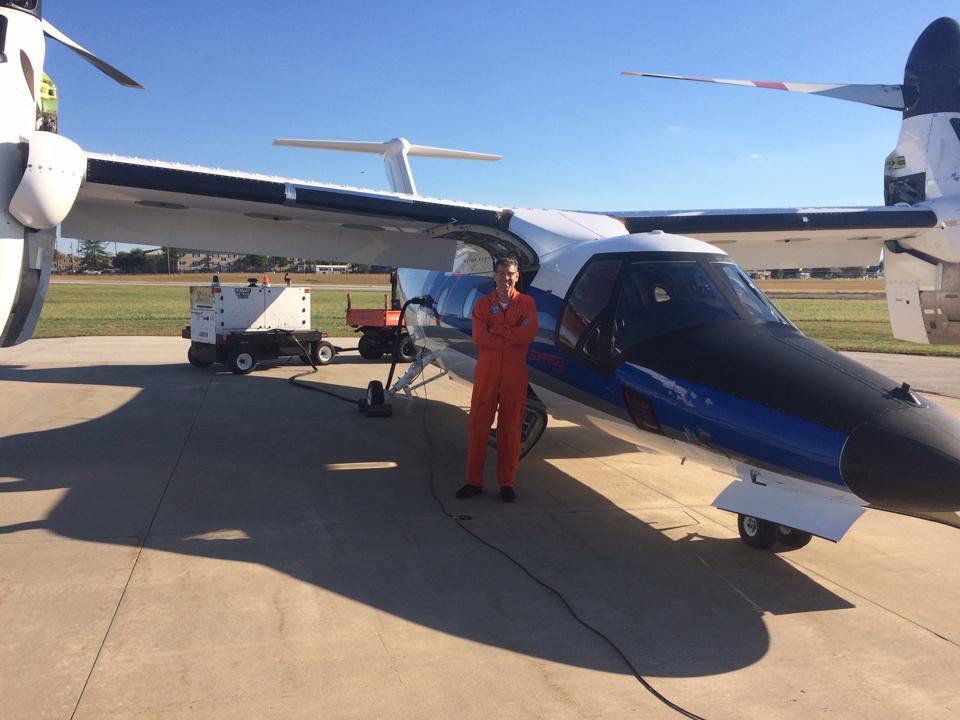 Training requirements have yet to be finalized, but Sunick says they expect it will take a “little more” time than the typical 4-week course to learn to fly the AW139 helicopter, and he says it will be as easy to master for fixed-wing pilots as those with helicopter backgrounds. The company will open a training academy this summer at its Philadelphia campus, where it’s raising the roof of a building to fit full-motion flight simulators for the AW609, as well as its AW109 and AW139 helicopters.

Sunick touts the tiltrotor’s potential to allow corporate flight departments and the wealthy to downsize their fleets, which often include helicopters to get from urban centers to their private jet at the airport. The AW609 may well be able to perform most helicopter missions, but it’s arguable whether it’s capable of replacing the corporate plane for many customers.

Leonardo expects it to have a maximum range of 550 miles configured for six passengers, and 650 miles when carrying three passengers with auxiliary fuel tanks.

The average business jet trip in the U.S. is about 600 nautical miles, according to a JETNET iQ analysis of FAA data from 21 major business aviation airports.

Aviation market researcher Rolland Vincent says he hasn’t seen much interest from potential buyers in the surveys of business aircraft owners he conducts for JETNET iQ. “The notion of vertical takeoff and landing is so elegant, it is the future of business aviation,” he says. “Just how soon we get there is the big question.”

Leonardo’s near-term challenge is to make it the first aircraft to complete certification under the FAA’s new Powered Lift category, which electric urban air taxis will likely fall under as well, and demonstrate its worth to the market.

One potential pool of buyers for whom performance often outweighs costs: governments. For foreign militaries, the AW609 could offer a discount way to get V-22-caliber response times, though the terms of the sale of the program to Leonardo don’t allow it to sell an armed version. The United Arab Emirates signed a memorandum of understanding in 2015 to acquire three AW609s for search and rescue operations; Leonardo won’t comment on whether the order has been firmed up.

Sunick believes that first adopters will create new markets for tiltrotors in the same way that smartphones and microwave ovens redefined how people communicate and cook. “You’re going to find new ways to do things,” he says.

Aboulafia, the aerospace consultant, is more sanguine on the prospects. “The best case scenario at this point is that it’s a niche but survivable program,” he says, with the company delivering one a month.

Get Forbes’ daily top headlines straight to your in-box for news on the world’s most important entrepreneurs and superstars, expert career advice and success secrets.

U.S. Markets Brace For Major Losses On Monday After Oil Price War. Here’s What Could Trigger The Circuit Breakers.

Is This The Next Oil Price Collapse?