For the Philadelphia Phillies and star catcher J.T. Realmuto, this arbitration stuff is just a blip in their relationship — a tiny, temporary blip.

The Phillies and Realmuto are headed to arbitration over a reported $2.4 million gap. Realmuto filed at $12.4 million while the Phils filed at $10 million, with an arbitration hearing to be scheduled some time next month. But the big drama between the two sides is this: Can the Phillies and Realmuto agree to a long-term deal before he becomes a free agent after the 2020 season? That’s the question — no, the quest — for Phillies general manager Matt Klentak, to keep the consensus best catcher in baseball in Philadelphia for a long, long time. 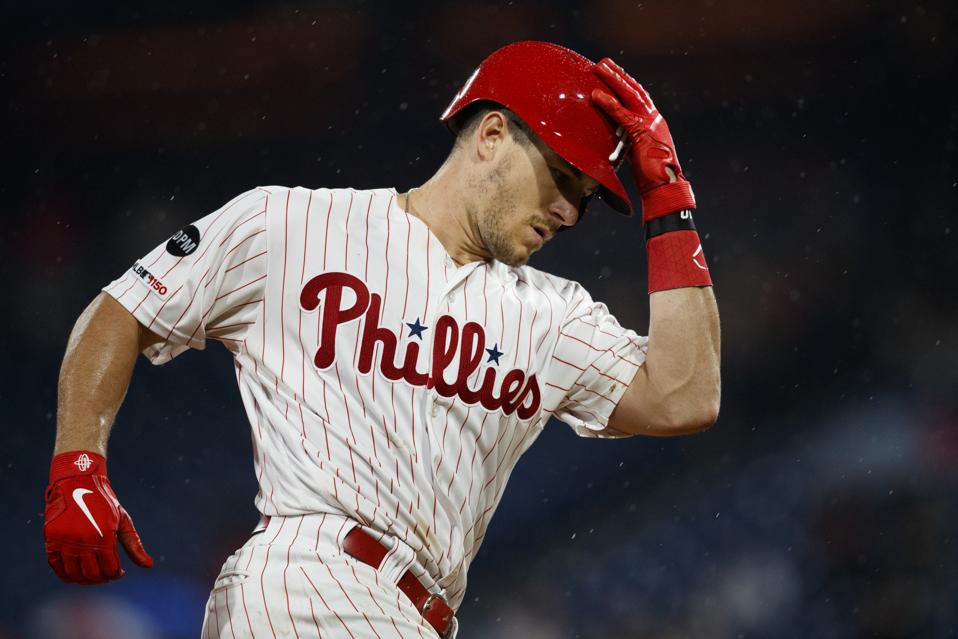 In his first season as a Phillie, Realmuto was magnificent, winning both a Gold Glove and a Silver Slugger in 2019. He led all catchers in hits (148), RBIs (83), and slugging percentage (.493), and became the first Phillies catcher since Mike Lieberthal in 1999 to hit at least 25 home runs. And then there’s his arm. Realmuto led the majors in caught-stealing percentage, throwing out 47 percent of would-be base stealers, compared to the major-league average of 27 percent.

The Phils would likely need to shell out at least $100 million on a multiyear deal to lock up Realmuto. A fair contract comparison: St. Louis catcher Yadier Molina signed a five-year, $75 million extension before the 2012 season. Molina was 29 at the time of the deal; the same age Realmuto will be in 2020. Factoring in salary inflation over the last eight years, a deal for Realmuto should hit 100 mill. That sounds like crazy cash to drop onto a middle-aged catcher but consider this: The National League will likely adopt the designated hitter before Realmuto’s contract expires — a change that could happen as early as the 2022 season. DH-ing Realmuto would prolong his career and give the Phillies added value in such a mega-deal.

Now, if Realmuto and the Phillies reach an arbitration hearing, it will the first hearing for the team since 2008 with Ryan Howard, though the Phils neared one last winter with ace Aaron Nola. On the eve of the scheduled hearing, the Phillies and Nola agreed to a four-year, $45 million extension. Realmuto’s case is different than Nola’s. The Phillies will likely not include Realmuto’s 2020 season into a long-term offer because the team needs to preserve what little space it has left beneath the Competitive Balance Tax (aka the luxury tax). FWIW: MLB Trade Rumors predicts Realmuto’s 2020 salary at $10.3 million.

Realmuto has said all the right things regarding his contract negotiations. “That’s a conversation we’ll definitely have this offseason,” he said after the 2019 season ended. “I’m certainly not opposed to staying here. I love playing here in Philadelphia. I love the crowd. I love the fans. I love my team. So we’ll see how that goes in the offseason.”

Meanwhile, Klentak’s quest to sign Realmuto will loom throughout winter and into Spring Training; and hopefully will be resolved before the season starts. It was last winter when Klentak boldly traded away an everyday catcher (Jorge Alfaro) and the team’s top pitching prospect (Sixto Sanchez) to pry Realmuto from the Miami Marlins. And, by mid-summer, the trade looked brilliant once we saw how good Realmuto is. But, if Klentak doesn’t sign Realmuto to a long-term deal, the trade will look decidedly less brilliant.

In other arbitration news

The Phillies also could head to arbitration with right-handed reliever Héctor Neris, who filed at $5.2 million, while the club countered at $4.25 million. Neris made $1.8 million last season when he led the team with 28 saves.

No, The Knicks Should Not Trade For Andre Drummond

The Xbox One And PS4 Were The Last Console Generation

When You Lead A Company Or Startup, You...

Green Bay Packers Vs. Seattle Seahawks: Who Has...

Coronavirus Pandemic, Economic Meltdown And The World Of...