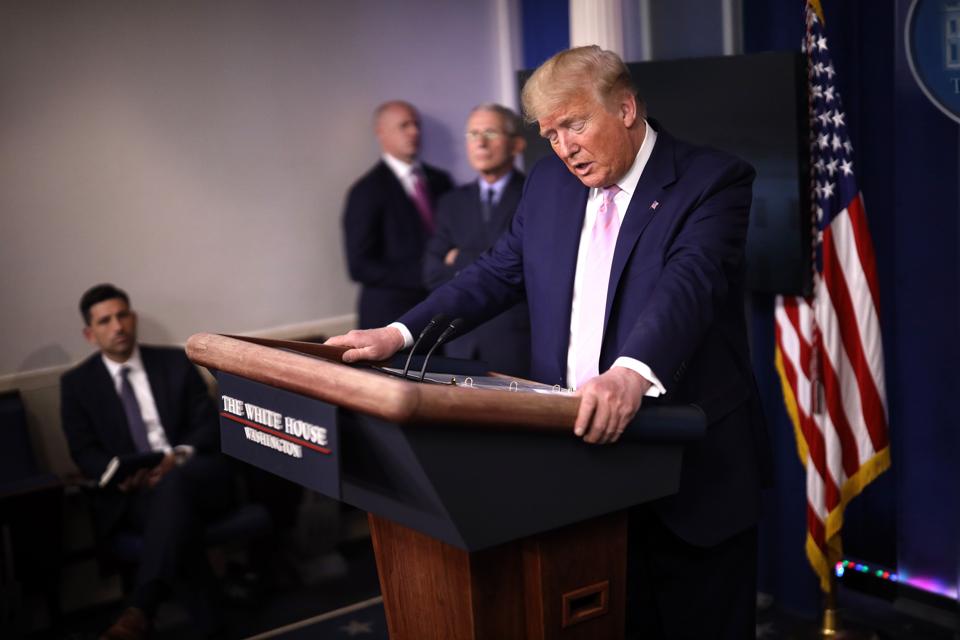 WASHINGTON, DC – APRIL 01: U.S. President Donald Trump speaks from the press briefing room with … [+] members of the White House coronavirus Task Force April 1, 2020 in Washington, DC. After announcing yesterday that COVID-19 could kill between 100,000 and 240,000 Americans, the Trump administration is also contending with the economic effects of the outbreak as the stock market continues to fall, businesses remain closed, and companies lay off and furlough employees. (Photo by Win McNamee/Getty Images)

Topline: During Wednesday’s White House briefing, President Trump praised Vice President Mike Pence’s ability to dodge a question on the administration’s decision not to reopen health insurance enrollment under the Affordable Care Act during the COVID-19 coronavirus pandemic before saying, “It’s something we’re looking at.”

Key background: Throughout the Trump presidency, the GOP has sought to strip or repeal the ACA, with Trump supporting an open lawsuit from a number of Republican states that seeks to label the law unconstitutional. It is now being handled by the Supreme Court. Yesterday, during an extended briefing, the taskforce shared that it was predicting between 100,000 and 240,000 deaths in the U.S. even with full mitigation measures. The U.S. currently leads all other countries in confirmed cases of the coronavirus with 213,372, with 4,757 confirmed deaths.

Tangent: In a reverse of focus for the daily White House briefings during the COVID-19 coronavirus pandemic, President Trump instead spent the first half of April 1’s briefing announcing enhanced counter-narcotics operations in the Western hemisphere. Trump shared that the military is deploying additional capabilities for operations occurring in the Eastern Pacific Ocean and Caribbean Sea targeting drug cartels that intelligence officials say are taking advantage of the outbreak. Members of the coronavirus taskforce like Dr. Anthony Fauci and Dr. Deborah Birx were absent to begin the briefing with the president instead flanked by attorney general William Barr and secretary of defense Mark Esper, along with other security officials.

After Controversy, Treasury Confirms Social Security Recipients Don’t Need To File A Tax Return To Get A Stimulus Check

The Milky Way Is Gaining New Stars From...

Is Extreme Cold In Alaska This Week That...