Breaking
4 Tips For Attracting Your First ‘Dream Client’...
Want To Generate More Sales This Holiday Season?...
Your ‘Harvest Moon’ Moment Is An Illusion: Why...
Google Meet’s Unlimited Calling Will Continue To Be...
The Need For Speed-Is Quantum Computing A Good...
Stock Market Crash: The End Game Approaches
Best Video Conferencing Software
House Democrats Debate Bill To Allow Student Loan...
For These Indigenous Artists “Land Back” Is Both...
The Current Tech Stock “Bubble” Reflects Pessimism, Not...
A Look At What’s Inside House Democrats’ New...
Page Authority 2.0: An Update on Testing and...
How Public Health Experts Are Harnessing The Power...
This Husband And Wife Built A Luxury Brand,...
This Husband & Wife Built A Luxury Brand,...
Luxury Footwear Brand Chelsea Paris Re-Launches And Stays...
Home Business Airlines May Need 25% Fewer Planes From Airbus, Boeing Over Next Five Years. That’s An Optimistic Forecast.
Business

Airlines May Need 25% Fewer Planes From Airbus, Boeing Over Next Five Years. That’s An Optimistic Forecast. 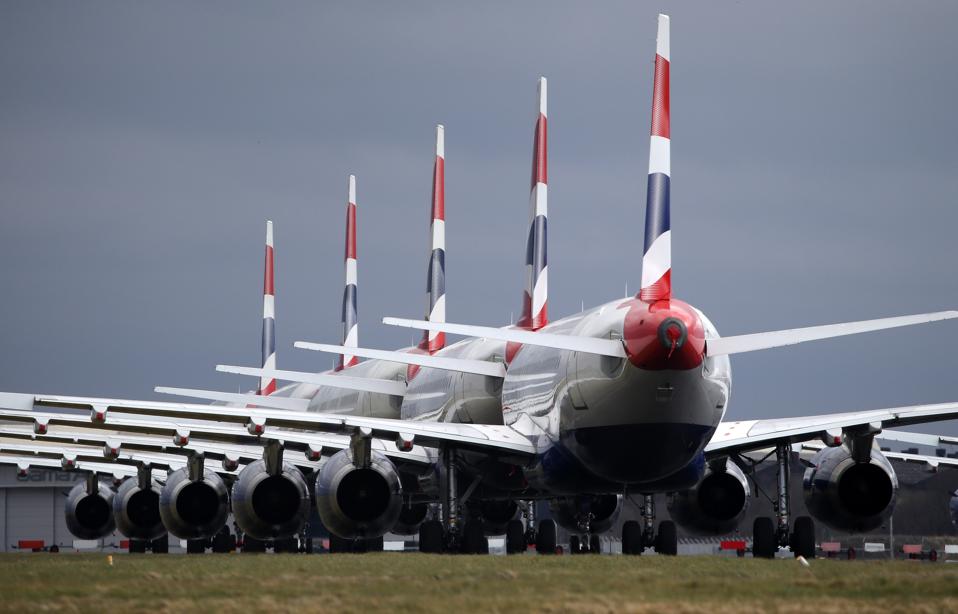 British Airways planes parked on the tarmac at Glasgow Airport after Prime Minister Boris Johnson … [+] has put the UK in lockdown to help curb the spread of the coronavirus.

Airlines around the world are going dormant. Over a third of the global fleet of 8,500 passenger planes have been parked, and scheduled flights this week will offer half as many total seats as in mid-January. When the coronavirus pandemic ends, many industry watchers now expect it will take years for airlines to return to their former size. That’s a bad scenario for airplane makers and their suppliers.

Airlines will need 6,300 new aircraft over the next five years, estimates Robert Stallard, an analyst with Vertical Research Partners, about 2,000 fewer than he’d forecast just a few months ago. That’s based on an estimate of a stomach-churning 40% reduction in airline passenger miles this year, roughly matching the industry group IATA’s forecast, and a slow recovery that only sees airline traffic return to 2018 levels in 2026.

Cowen airline analyst Helane Becker expects it will take 18 to 24 months for traffic to return to “some level of normal.”

After 9/11, it took roughly seven years for U.S. airlines’ traffic to fully recover on flights over 500 miles and over 1,000 miles, she notes.

With thousands of older planes likely to be retired permanently, with a tilt toward widebodies, as airlines seek to cut costs, Stallard believes the active airline fleet won’t return to 2019 levels until about 2025.

That may be conservative says Richard Aboulafia, a consultant with the Teal Group, given the many unknowns as to the length of the pandemic, how travelers will respond and the effectiveness of government efforts to support airlines, manufactures and the global economy. “I think a lot of us have a creeping anxiety it could be a whole lot worse,” he says.

Aboulafia and Stallard expect Airbus to be cushioned by the popularity of the A321, a long-range narrowbody that can serve as a cheaper alternative to widebodies on thinner long-haul routes, as well as pioneer new ones. Airbus’ monthly delivery rate for the A320 family could recover to 55 a month by 2022, Stallard forecasts, eight shy of the planemakers’ former production goal.

He sees demand being hit proportionately harder for the widebodies used on international routes, which are seeing the steepest fall off in demand, and the 737 MAX: he expects Boeing to deliver just 30 a month of its flagship narrowbody in 2023 and 2024.

However, the next few years will be somewhat less catastrophic for Airbus and Boeing than it could have been, for two reasons. Their narrowbody output has been lower than planned, in Airbus’ case due to production problems, in Boeing’s, because of the grounding of the troubled 737 MAX. The U.S. and European governments are also lining up to provide financial support that will keep their factories open and producing planes that the market doesn’t really want right now.

“You’re pulling demand forward to a certain extent, but it probably beats falling off a cliff,” says Aboulafia.

Boeing CEO David Calhoun said last week that he wouldn’t take federal assistance if it required surrendering equity to the government. Also likely a turnoff is language in the $2 trillion stimulus package that requires loan recipients to maintain headcount at 90% of current levels until Sept. 30.

“Both sides need to find a way production can be cut, employee head count can be cut, but some sort of support can be found for keeping production higher than actual short-term market needs, which are approaching zero,” says Aboulafia.