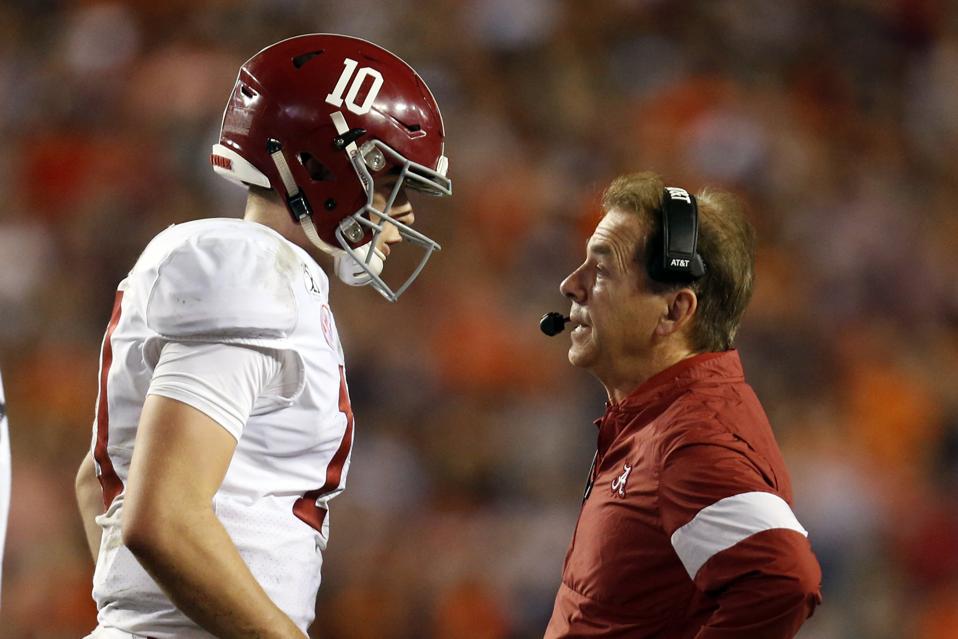 Joe Burrow, Jalen Hurts, Tua Tagovailoa and Justin Herbert are among quarterbacks who left huge turf shoes to fill. Hence, this spring will feature some headline-grabbing quarterback battles at LSU, Oklahoma, Alabama and Oregon, among other places.

In a couple of instances highlighted below the cupboard is rather bare when it comes to experience. Conversely, there are battles that will include a returning starter. Regardless, here is a look at some of the battles that will play out starting this spring. More than one could linger even beyond fall camp.

Mac Jones did a commendable job in taking over for the injured Tua Tagovailoa. Though he threw two interceptions in an Iron Bowl loss to Auburn, he also threw for 937 yards and 10 touchdowns in three games after taking over the offense following Tagovailoa’s college career-ending injury at Mississippi State.

Jones, a redshirt junior with three years in the program, shall not be considered a lock. Not with early enrollee Bryce Young on board. Young’s effort at national powerhouse Mater Dei resulted in being named the 2019 high school player of the year seemingly by any and all entities that sponsor such an award.

Because of his experience and success at the end of last season, Jones very well may carry the No. 1 job into the season opener against USC. Young, though, could see some playing time early and who knows from there.

You have to hand it to Myles Brennan for hanging in there after losing the battle with Joe Burrow two years ago. Now, can coach Ed Orgeron securely hand Brennan the keys to the Tigers’ offense? Over parts of three seasons the redshirt junior has 72 pass attempts and 600 yards. So, there is a little experience beyond breaking down film.

Freshmen Peter Parrish, Max Johnson and T.J. Finley, Louisiana’s top quarterback in 2019, will have a chance to impress this spring and perhaps at least one will nip at Brennan’s heels. Parrish, a redshirt freshman, is a dual-threat with a season in the system and Johnson, a true pocket passer, enrolled in January.

Finley took the meaning of “early enrollee” to a new level by signing in December and coming on board prior to the Tigers’ Peach Bowl appearance against Oklahoma. As such, the 6-foot-6 and 257-pound pocket QB was able to get some practice reps even before the calendar turned to 2020.

Brennan certainly has an advantage when considering the lack of experience behind him, though an incoming transfer should not be ruled out. Either way, it will be interesting to see how the freshmen fare this spring.

The Wolverines said goodbye to Shea Patterson, who spent two years as the starting quarterback following his transfer from Ole Miss. That leaves two players with a combined five years in Ann Arbor as the primary — for now — candidates to lead the maize and blue: redshirt junior Dylan McCaffrey and redshirt sophomore Joe Milton.

McCaffrey, son of former NFL receiver Ed McCaffrey, has totaled 508 yards and five touchdowns in 10 career games. The six-foot-five, 220-pounder brings a dual-threat dimension to the offense. However, he suffered a broken collarbone on a run that ended his 2018 season prematurely and he sat out a few games in 2019 due to a concussion suffered against Wisconsin while toting the pigskin. First things first this spring for McCaffrey: stay healthy.

Milton, who served as Patterson’s backup last season while McCaffrey was shelved, stands 6-foot-6, 245 pounds and has a rocket of an arm. He needs to continue to work on refining his throws, something that has been a work in progress. Then there is redshirt freshman Cade McNamara, a two-time Nevada Gatorade Player of the Year with a strong pocket presence, who could find himself No. 2 especially if either McCaffrey or Milton transfers.

Baker Mayfield, Kyler Murray, Jalen Hurts. Indeed, it was quite a five-year run in Norman with a trio of transfers combining to add a pair of Heisman trophies in the Switzer Center.

It is now time for a homegrown product, if you will, to assume the reins. Redshirt freshman Spencer Rattler was one of the nation’s most highly-regarded recruits in the class of 2019. The nation got a glance of him in the Sooners’ Peach Bowl debacle against LSU when he completed an eight-yard pass and had an eight-yard run among the few snaps he took.

Redshirt sophomore Tanner Mordecai, who threw for 207 yards and a pair of touchdowns last season, is more of a dual-threat and has two years in the system. Though you never know what might happen over the next several months, it would appear Rattler’s time has arrived in Norman. 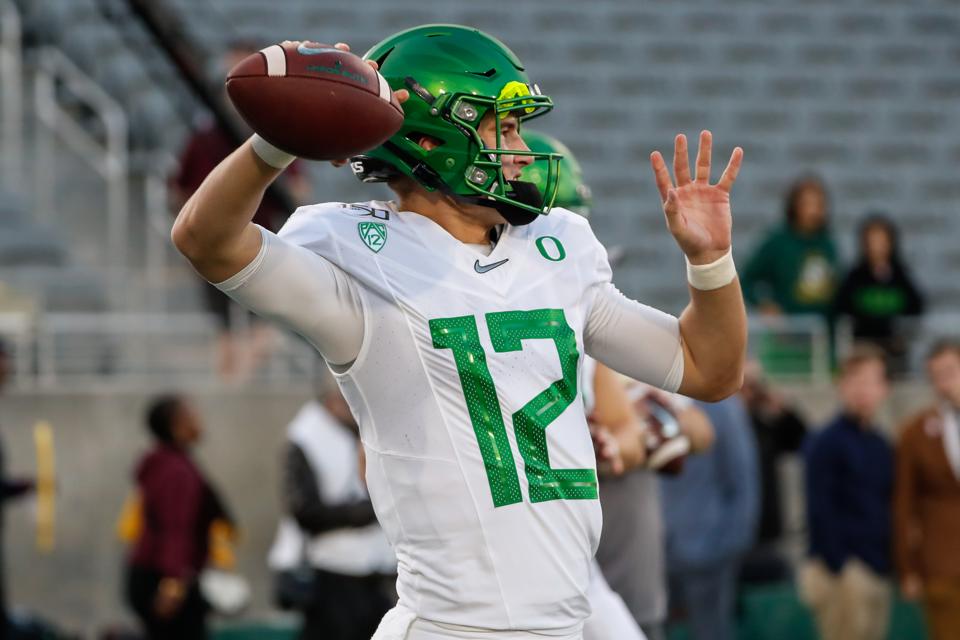 Tyler Shough is the only quarterback on the Oregon roster who has attempted a pass. (Photo by Kevin … [+] Abele/Icon Sportswire via Getty Images)

Whoever takes over for the departed Justin Herbert will line up behind four new starting offensive linemen. In other words, the Ducks could be into conference play before things settle.

Tyler Shough is the only candidate with playing experience. His numbers last season were extremely impressive (12-of-15, 144 yards, 3 TDs), albeit on a very limited basis. The redshirt sophomore has been praised for his arm strength and leadership skills and on top of that has spent two years in Eugene. At least from this early perspective, it would seem the spotlight is pointed in his direction.

Cale Millen and Jay Butterfield will likely provide most of the competition. The former simply needs to get on the field this spring and make his presence known. An early enrollee a year ago, Millen’s spring was incomplete thanks to the injury bug and a shoulder injury suffered in early October ended his season.

The 6-foot-6 Butterfield, ESPN’s No. 14 pocket passer, is an early enrollee who could find himself in a very good situation heading into fall camp when considering Millen’s injury woes of a year ago and the fact Robby Ashford, the top-rated quarterback prospect out of Alabama, does not arrive until summer.

The most intriguing battle to get underway this spring may very well be in Knoxville. Jarret Guarantano started all 12 games in 2018 and entered 2019 as the No. 1 signal caller. He lost the job to Brian Maurer in mid-season only to get it back after the latter suffered concussions in consecutive October games. Guarantano then shared duties with J.T. Shrout for a week and relieved Maurer in a couple of late-season games before starting and playing all but one series of the Vols’ victory over Indiana in the Gator Bowl to cap the program’s first winning season since 2016.

This will be it for Guarantano, a fifth-year senior. Maurer, who made four starts and is coming off January knee surgery, is a sophomore and Shrout is a redshirt sophomore. Collectively, they threw 19 TD passes with 13 interceptions and were 74th nationally in pass efficiency. In other words, there is a job to be won starting this spring.

Early enrollees Harrison Bailey, a highly-touted pocket passer who committed to UT in 2018, and electric dual-threat Jimmy Holiday, who initially committed to TCU, could make things interesting for coach Jeremy Pruitt and OC Jim Chaney. Then there is Maryland transfer Kasim Hill, who missed last season due to tearing an ACL late in the 2018 campaign. Speaking of transfers, well, that’s six quarterbacks.

The Huskies’ September 5 season-opening encounter against visiting Michigan will prove interesting if for no other reason than both teams’ quarterbacks will be making their first career starts. For UW, which has a new offensive coordinator in former Jacksonville Jaguars, Penn State and Vanderbilt OC John Donovan, the new No. 1 could be redshirt sophomore Jacob Sirmon, redshirt freshman Dylan Morris or somebody who is currently not on the roster.

The 6-foot-5 Sirmon’s three attempts behind Jacob Eason last season represent the lone playing experience in the quarterback room. Depending on the recruiting service, Morris was rated as the top or No. 2 prospect in the state of Washington. He was highly praised for his work on the scout team last year. True freshman Ethan Garbers is on board this spring after throwing 71 touchdown passes last season, third-most in California state history behind only former Husky Jake Browning, who has the top two entries.

When you look at Jack Coan’s stats from last season and see 2,727 yards and 18 touchdowns for the 10-win Badgers, the inclination might be to apply the “game manager” label. If so, there are few that have done better. Coan completed 70 percent of his passes with only five interceptions in 339 attempts while placing 19th nationally in pass efficiency.

With running back Jonathan Taylor off the NFL, coach Paul Chryst might need more production out of the quarterback position. That could mean the folks in Madison will get more than a glimpse of Graham Mertz, rated the No. 3 pro-style quarterback by 247Sports for the 2019 class. By appearing in only two games (9-of-10, 73 yards) last season, Mertz was able to redshirt and maintain four years of eligibility.

Would You Work With A Robot?

Mapping A Better Life For Older Adults Of New York