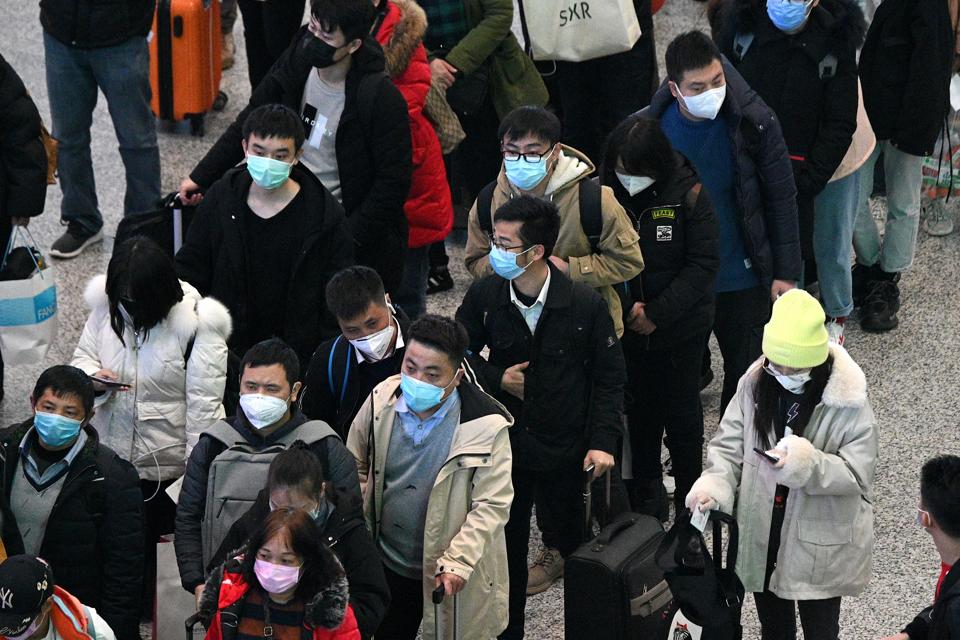 Passengers wearing protective face masks arrive at the Hongqiao railway station in Shanghai on … [+] February 26, 2020. All eyes will be on this city, in hopes that the low number of coronavirus patients does not balloon anytime soon.

So far, Shanghai has been unscathed by the deadly new coronavirus known as Covid-19. As a million more people return to work in China’s most important cities, all eyes will be on Shanghai’s ability to keep the outbreak from rising into the thousands.

The city of 24 million has had just 336 reported cases, based on data compiled daily by Johns Hopkins University. Of that total, 272 people recovered. There are only 61 people now hospitalized with respiratory problems caused by the virus. For a city of this size, that’s nothing.

But that’s mainly because Shanghai, like other tier 1 cities in China, has faced travel restrictions, business and school closures since the Lunar Near Year holiday, when the outbreak went into high gear. Shanghai locals are now starting to return to work. It would be a trickle if Shanghai was a small town.

On February 20, roughly 28% of the workforce in tier 1 cities like Shanghai had returned to work. By Monday this week, it reached over 31%.

In Shanghai, the amount of foot traffic in the city can be judged by the number of metro train trips. In Shanghai on February 20, city metro lines clocked 1.7 million trips. On Monday, it hit 2.7 million.

At the very least, it is safe to say that hundreds of thousands of people in Shanghai are returning to work this week.

Given Shanghai’s importance to China, and its role as financial services hub in the country, coronavirus cases will be under the microscope. If they rise to 1,000 in the weeks ahead, a likely scenario given the number of people trying to return to their normal routines, markets will be pondering Beijing’s response. Does the city fall back under strict travel restrictions? Do people go back to self-quarantining? Do businesses shut down until public health officials have a better grip on how to stop a virus that seems to be easy to catch.

China has 78,064 reported hospitalizations because of Covid-19, of which 65,187 are in Hubei province, the epicenter of the outbreak.

There are roughly 3,500 more cases outside of China, with South Korea being the country with the most cases overseas.

Families coming back from China leave quarantine at the Air Force base of Anapolis, state of Goias … [+] in Brazil on February 23, 2020. Ironically, one person in Sao Paulo caught the disease while in Italy. (Photo by Andressa Anholete / Getty Images)

Italy is next, making itself the epicenter of the outbreak in Europe. A Brazilian adult who had been in Italy during the outbreak got infected with the virus there and is the first person in Brazil with Covid-19.

According to a February 25 story by China News Services, at least seven provinces and regions in China have actively lowered their Covid-19 emergency response levels from a high alert Level 1.

Guangdong and Shanxi lowered their emergency response to Level 2. Gansu, Liaoning, Guizhou, Yunnan and Guangxi lowered it to Level 3.

“This echoes Beijing’s call for accelerating the resumption of business activities in regions less affected by the outbreak,” Nomura analysts led by chief China economist Ting Lu wrote in a note to clients.

The Shanghai Composite closed 0.83% lower on Wednesday. The iShares MSCI China (MCHI) ETF is down 0.58% out of the gate this morning.

“It seem this week the world is waking up to the reality of the situation as the containment of coronavirus hasn’t yet materialized and confirmed cases are soaring in different countries,” says Nigel Green, CEO of deVere Group, a U.K. headquartered financial advisory with offices in Shanghai and Hong Kong. “Until such time as governments pump liquidity into the markets and coronavirus cases peak, markets will be jittery, triggering sell-offs.”

The next two weeks will provide more insights into how Covid-19 is being contained as Shanghai inches back to work.

Some investors aren’t being lured into equities on the China stimulus and Fed summer rate cut thesis.

“We are underweight China and recently, because of the coronavirus, are even more underweight,” says Vincent Nichols, an emerging markets fund manager for BNP Paribas in Boston. “I’m not confident that we are out of the woods. This is a huge economic risk. Not just to China.”

Creating Online Courses That Work for Your Students and Your Business

Why Computer “Repair” Offer Is Cybertheft