Breaking
How, When And Where You Can See A...
New $2.2 Trillion Stimulus Bill Proposed—$1,200 Stimulus Checks,...
Why Do We Do What We Do? Manipulating...
California Brand Goes All-American As Amazon Bans Foreign...
The 3 Best Analytics Companies of 2020
Senator Cory Booker: Supporting Small, Minority-Owned Businesses Will...
Trump’s Taxes Are Finally Leaked—What’s Next?
Washington Heats Up Ahead Of First Presidential Debate:...
Systemic Racism Leads To Disparities In Nursing Home...
The New Regular: Prepare For Conflicts Of Customer...
Web VR.0 – Have VR Websites (Finally) Arrived?...
This Next Evolution Of E-Commerce Did $18 Billion...
This Next Evolution Of Ecommerce Did $18 Billion...
IRS Taxes Most Lawsuit Settlements And Exact Wording...
13 Questions To Answer Before You Die
Just Launched: Long-Term Stock Exchange For Companies Building...
Home Business All-Female Crews Handle Hockey Broadcasts, But Women’s Worlds Tournament Cancelled Due To Coronavirus
Business 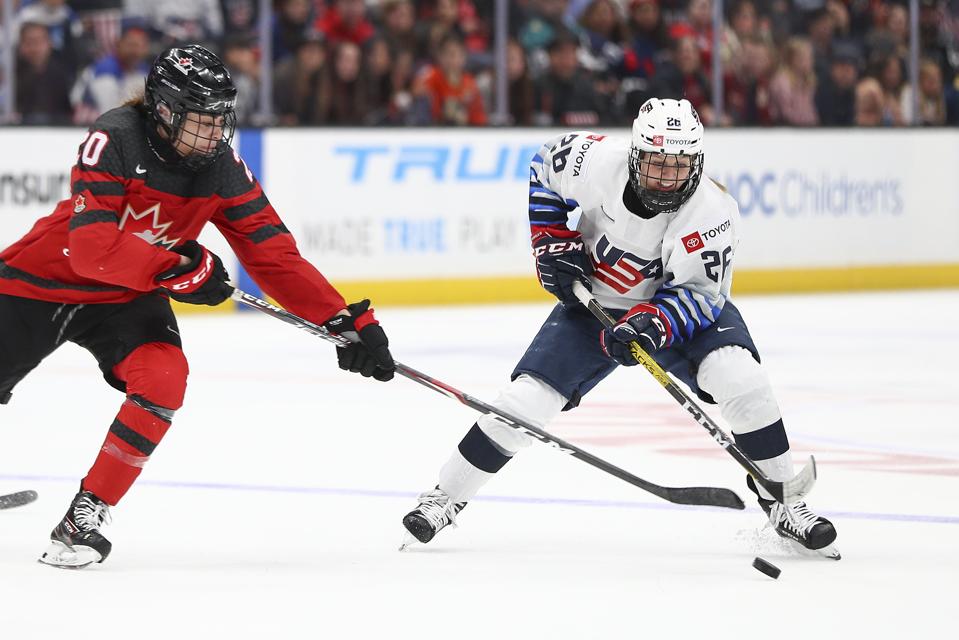 As the NHL celebrates Gender Equality Month in March, there’s good news and bad news for the women who play and cover the game of hockey.

Let’s start with the positives. For the first time ever, both NBCSN in the U.S. and Sportsnet in Canada are broadcasting their Sunday games on International Women’s Day with female production crews and all-female broadcast lineups.

In Canada, Christine Simpson will be the in-rink host at the Saddledome in Calgary when the Flames host the Vegas Golden Knights. Cassie Campbell-Pascall is a regular Flames color voice, and Leah Hextall with make her NHL play-by-play debut.

Coyne, 26, has been a regular in NBCSN’s broadcast rotation this season, sprinkling assignments in between on-ice appearances with the PWHPA’s “Dream Gap Tour,” most recently in a showcase game in Tempe, Arizona on Saturday.

The tour was designed to give the top players a place to play after the Canadian Women’s Hockey League folded last season, and after they vowed to stay off the ice in hopes that their combined efforts could spearhead the formation of a truly professional women’s league.

Other than seeing a planned showcase in Japan cancelled due to coronavirus concerns, the Dream Gap Tour has lived up to expectations and perhaps exceeded them — touching down across North America for showcase games and lots of engagement with young players at each tour stop. Players have remained patient and upbeat despite the fact that their new pro league still seems a long way away from reality.

On Saturday, they learned that their season had taken another hit when the International Ice Hockey Federation announced the cancellation of the biggest event on this year’s women’s hockey calendar — the World Championship that had been scheduled to run in Halifax and Truro, Nova Scotia, between March 31 and April 10.

“It is with great regret that we must take this action,” said IIHF President Rene Fasel in a statement. “It was not an easy decision to make, as we were greatly looking forward to hosting this tournament in Canada. Nevertheless, the decision has been made due to safety concerns for the well-being of players, officials, and spectators.

“Ultimately the IIHF Council feels that there has not been enough of an improvement to the coronavirus situation to allow us to safely host a 10-team international tournament within this timeframe. We look forward to coming to Canada in 2021.”

It’s another body blow for women’s hockey, which reached a new level of exposure in the U.S. in February when a record-setting crowd of 13,320 turned out in Anaheim to watch Team USA finish its five-game Rivalry Series against Canada with a 4-3 overtime win in the game and a 4-1 win in the series.

The U.S. team was set to head to Nova Scotia ranked first in the world, and looking for its sixth-straight World Championship title after a controversial 2-1 shootout win against the host Finns in the 2019 gold-medal game.

For their part, the Canadians were still ranked second in the world but had something to prove after their semifinal loss to the Finns saw them play for bronze for the first time in the 20-year history of Women’s Worlds.

“Completely devastated that our 2020 World Championships are cancelled due to the Coronavirus. We train all year for this exact opportunity,” echoed Team USA forward Amanda Kessel.

On Saturday, Hockey Canada CEO Tom Renney discussed the fact that the tournament was set to include players and staffs from 10 different countries, including Canada and the U.S. Renney said organizers were concerned about the possibility of overloading the medical system in Nova Scotia if any cases did arise during the tournament. There’s also a risk that players might not be able to get home if the situation worsens in their home countries while they’re away.

The economic impact of a cancellation like this can be massive. TSN’s Rick Westhead said when Women’s Worlds event was held in Ottawa in 2013, $13.5 million (Cdn) flowed through to local businesses.

The IIHF has said that the tournament will return to Halifax and Truro in 2021.

The cancellation announcement came as a bit of a surprise. Just a few days earlier, on March 2, the IIHF said that the event was still on, as it cancelled six lower-level U18 events in Europe — four men’s tournaments and two women’s events.

The cancellation came on the heels of Friday’s announcement that organizers were pulling the plug on the massive SXSW event in Austin, Texas, which had been scheduled to run from March 13-22. For the moment, other sporting events in North America have been going ahead — some, against the recommendation of local health authorities; others, in empty arenas.

Two more big events are still on the IIHF calendar — for now. The World U18 Championship — one of the most important events of the year for scouting draft-eligible players — is scheduled for April 16-26 in Plymouth and Ann Arbor, Michigan. And the top-level men’s World Championship is set to take place in Lausanne and Zurich, Switzerland, from May 8-24.

The IIHF is scheduled to meet in mid-March and is expected to re-evaluate the coronavirus situation and its impact on future tournaments at that time.

When Fear Drives Us Apart: 6 Ways To Collaborate Rather Than Compete And Why It’s Important For Your Career