Breaking
ESBC Major Updates: Tons Of Heavyweight Greats Added...
5 On-Demand Courses To Help Develop Your Leadership...
How to Run Nonprofit Marketing Ads
Entrepreneurs Are Bringing Transparency To Home Buying And...
Best Incentive To Get Vaccinated: Money, Messaging, Or...
Page Level Query Analysis at Scale with Google...
How A CIO Can Align IT With Business...
Blogger of the Month: Jo, Girl Eats World
6 Things Women In Business Know That Men...
How to Use First-Party Data for Ad Personalization
Pressing Reset—Putting A Fallen Unicorn Back On Its...
How We Went Viral: Promoting Content with Influencers,...
Blame Olympic Record Price Tag For Return To...
Apple iOS 14.5 Release: Should You Upgrade?
How to Come up with Podcast Topics and...
Why Gaming Gear Company Razer Launched A $50...
Home Technology Alphabet May Have To Lower Costs To Become The Next $1 Trillion Company
Technology

Michael Kramer and the clients of Mott Capital own GOOGL

Alphabet Inc. (GOOG, GOOGL), the parent company for the search engine Google, will look to become just the third US-listed company to enter the $1 trillion market cap club in 2020. The stock will need to rise by about 8% between now and the end of 2020 to join this exclusive club. It isn’t going to be an easy task for the equity, especially if earnings growth slows as analysts project.

The company has already made some interesting pivots heading into 2020. Most notably is at the very top, with Sundar Pichai the CEO of Google also becoming the CEO of Alphabet, taking over the position for cofounder Larry Page. On the surface, it appears investors have reacted favorably to the news, with shares rising 3.8% since it first broke on December 3. But then again, the S&P 500 has jumped by 4.2% over that same time. 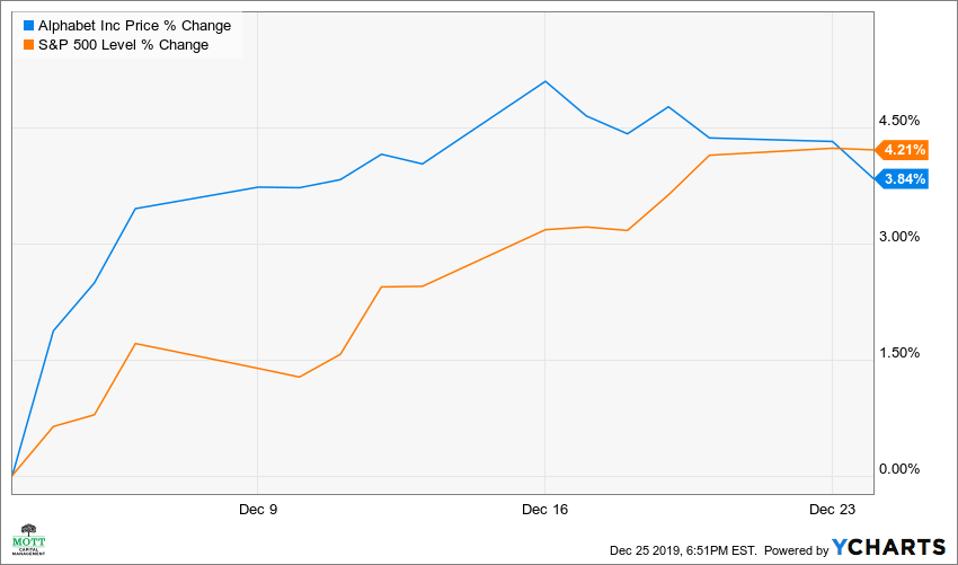 Currently, analysts’ forecast revenue will grow by 17.8% in 2020 to $191.5 billion, from a forecasted growth rate of 18.9% in 2019.  The big problem for Alphabet is the slower earnings growth, which is forecast to rise by 10.3% to $53.76 per share, from an estimated growth rate of 11.6% in 2019. Forecasts for earnings to grow more slowly than revenue would suggest that analysts expect costs to rise in 2020, which may negatively pressure margins.

Operating margins for the business have come under considerable pressure in recent years, falling down a slippery slope since September 2017. From March 2013 until September 2017, margins had been consistent and stable. But then something changed in the fourth quarter of 2017, and suddenly margins began to slip noticeably. 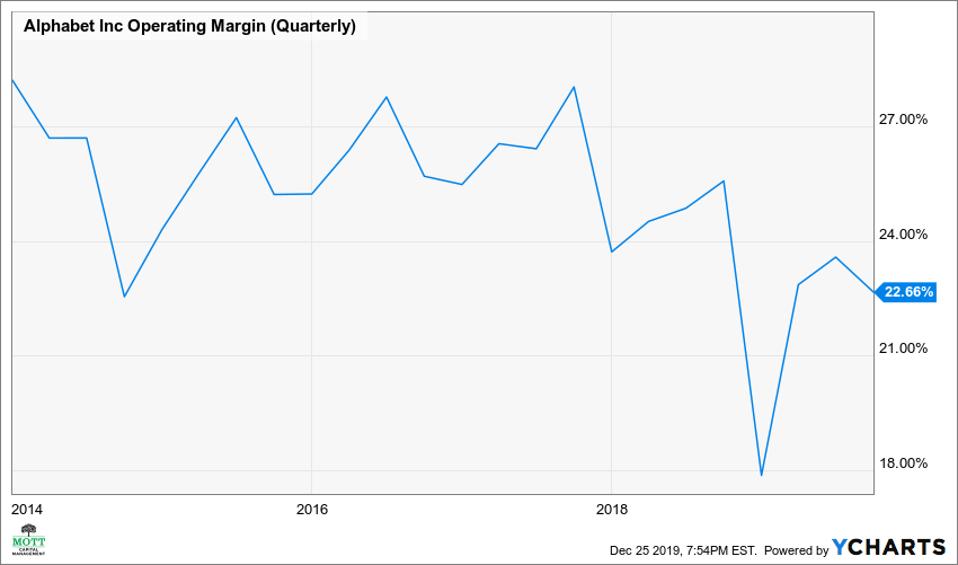 The fourth quarter of 2018 was the quarter that saw the cost of revenue segment on the income statement rise by 34% on a year over year basis. Higher traffic acquisition costs for mobile devices drove the considerable jump. On a trailing twelve-month basis starting in the fourth quarter of 2017, the cost of revenue has risen by about 51% to $68.8 billion. Meanwhile, during that same period, revenue has increased by roughly 39.9% to $155 billion. But there is more, because Research and Development costs have also risen by around 49.3% to $24.8 billion.

It means for earnings growth to rise faster and to keep pace with the revenue growth, costs will need to fall. A hard-balancing act for the new CEO, trying to spend just enough to plan for the future, while at the same time being able to pull margins higher. 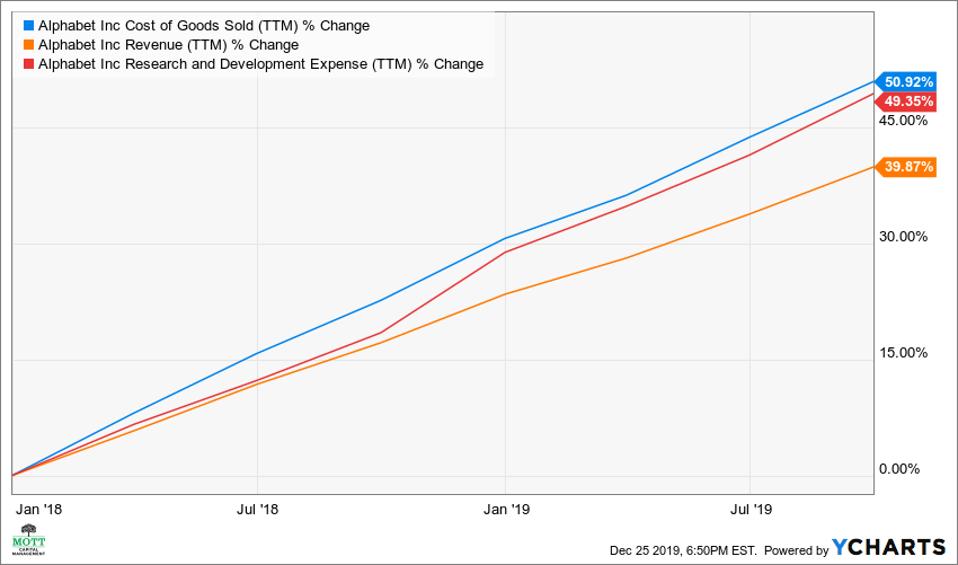 Turning Away from The Bottom Line

The operating side of the business and those margins will need to be in focus for 2020. That is because earnings per share have been heavily influenced by the other income business segment on the income statement in recent quarters. For example, other income in the third quarter of 2019 harmed net income, due to an unrealized loss of $1.5 billion on equity securities. In the same quarter in 2018, the company had an unrealized gain of $1.3 billion. These wide fluctuations in other income can have a very big overall effect on the company’s bottom line and earnings per share. It appears to have played a contributing role in the company missing earnings estimates in the third quarter of 2019. The results showed operating income improved versus the same period a year prior, but overall net income fell.

If Alphabet can show investors, it can grow revenue around the analysts forecasted 18%, and the company can keep costs under control while increasing operating income. Then the stock has plenty of reasons to climb and join the exclusive $1 trillion market cap club. If costs continue to rise and margins continue to compress, then 2020 may prove to be a challenging year for the stock.

Can Intermittent Fasting Help You Lose Weight And Improve Your Health?