Home Business Alvin Gentry Coaching On Borrowed Time With New Orleans Pelicans, Might Not Make It To 2020
Business

Alvin Gentry Coaching On Borrowed Time With New Orleans Pelicans, Might Not Make It To 2020 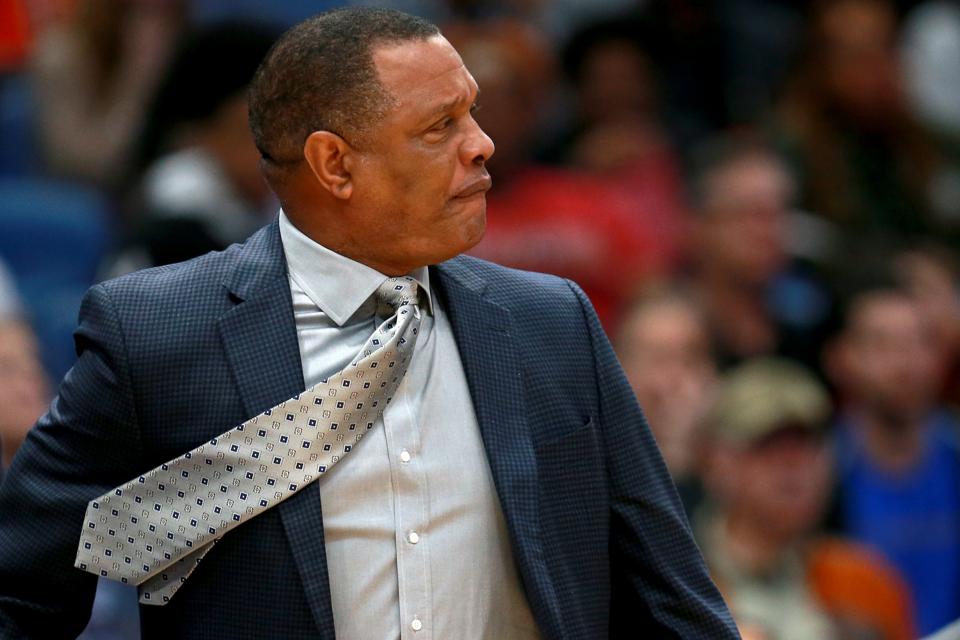 NEW ORLEANS, LOUISIANA – DECEMBER 15: Alvin Gentry of the New Orleans Pelicans reacts after being … [+] ejected after receiving a double technical foul during a NBA game against the Orlando Magic at Smoothie King Center on December 15, 2019 in New Orleans, Louisiana. NOTE TO USER: User expressly acknowledges and agrees that, by downloading and or using this photograph, User is consenting to the terms and conditions of the Getty Images License Agreement. (Photo by Sean Gardner/Getty Images)

Alvin Gentry admirably guided the New Orleans Pelicans through the end of the Anthony Davis era. The losses and post-game quotes were understood and Gentry’s poise was endearing. Gentry is again the face of the franchise in a time of turmoil. That was not to be his role this season though, not with this roster. He is coaching on borrowed time, and he knows it.

Gentry told Scott Kushner that his job status, “is not his decision but will keep showing up every day doing what he can to get it corrected.”

David Griffin came out and declared this team would be a playoff contender capable of dominating performances. He also stated the obvious: The Pelicans’ future belongs to Zion Williamson. This would be a maturation year for the younger players while evaluating how the veterans fit the team’s long term plans. The same applies to the coaching staff.

After a 46-point loss, there was a growing sour mood regarding Gentry’s future with the team. Following that with a Sunday loss to a sub-.500 Orlando Magic loss that was not all that close in the end, well, those games not positive developments for the New Orleans Pelicans. The manner of the losses suggests the problem goes beyond on-court talent.

David Griffin looked well past displeased as Gentry stormed down the tunnel following an ejection during the Orlando loss. Injuries only excuse so much, something has to give. The New York Knicks fired David Fizdale after blowout losses that extended a losing streak. The Pelicans just lost their 12th game in a row. The largest loss in franchise history is included in this demoralizing streak.

New Orleans has already exercised Gentry’s contract option for next season. However, a few million dollars to replace a coach hired by the past regime is an acceptable course of action in most situations. Finding the right coaching staff for Williamson is the most important decision going into the 2020s.

The Pelicans are still not executing set plays. A failure to inbound the ball against the Los Angeles Lakers ruined any chances of spoiling Davis’ return to New Orleans. Gentry is still tinkering with lineups and rotations, confusing the players. His clock management, like not using a timeout during that Lakers loss, has been spotty. Coming on to the court to stop a live ball cost the team a couple of points and set Gentry back thousands of dollars.

Griffin spent millions to bring in veteran players to ensure Zion Williamson was developed in a competitive environment. Derrick Favors and JJ Redick bought into the playoff expectations or else they would have found their way to different teams. Even if the team fell short of the playoff standard this season, New Orleans expected to feel pretty decent about the growing pains experienced to end the decade. The 2020s offered too much hope to be discouraged for long. That is not the case going into the New Year.

The debate over whether Gentry will finish out the season is growing one-sided. Should the Pelicans fail to find a win in the next two weeks, Griffin could be forced to make a change before traveling to Los Angeles to face the Lakers on January 3, 2020.

This might be Gentry’s last shot as a head coach. He is 65 years old, having spent 30 years in the NBA. He has only has 4 winning seasons as a head coach. His 2011-12 Phoenix Suns team finished 33-33 and missed the playoffs. His system requires the right roster and finding the right fit will be tough.

Gentry has a reputation as an effective offensive coach. He was a pioneer in playing fast and taking early shots, especially from three-point range. However, he never quite found the right balance in the pace of play and talent on the roster. When it came time to slow down, evaluate, and plan out a full game of plays, Gentry usually let his players run their way out of the problem. This season, the team has hit a brick wall.

Gentry demanded 40 three-point shots per game by a team that led the league in pace of play. By those metrics, Gentry is coaching the New Orleans Pelicans team he wanted to build. Unfortunately, New Orleans is in the bottom third in adjusted offense. The Pelicans pump in the points, usually as they play fast to catch up. It leads to inefficient play. New Orleans is barely average in all 4 Offensive Factors.

Freelance offense leads to scattered defense. The team still seems unsure of themselves halfway through December. Even when the score is close, the crowd seems as doubtful as the players, only they are more enraged than entertained when engaged. Like Gentry, most fans spend the second half slumped and sulking. Still, when asked about altering strategies in the face of injuries and inconsistent play Gentry was steadfast in his ways.

Try as they might, the New Orleans Pelicans can no longer put a positive spin on Alvin Gentry being the conduit for controversy through a lost season. It was acceptable and understandable to let Gentry finish out Davis’ last season. It was good faith to pick up his contract option for next season. However, letting Gentry continue to coach the team is a hard sell for all involved.

Griffin kept his eyes on the jumbotron when letting Gentry pass. All eyes are on Griffin to see how quickly he acts to save the silver linings of this season. Will he remain patient, calm in the knowledge the Pelicans are only six games back of the seventh seed with over 50 games to play? Or will a losing streak littered with double-digit losses become too much of a burden to bear?

Either way, New Orleans must start looking for a new head coach for next season. The historic number of season ticket holders will not buy into the “Won’t Bow Down” motto if it seems the Pelicans are kneeling to the same complacent standards of old. That complacency is what Gentry now represents, with the current losing streak serving as a crushing backdrop.

Expect More Lawsuits And Restrictions On H-1B Visas In 2020

RPA Center Of Excellence (CoE): What You Need...

Many Locations, One Culture: How This Outdoorsy Startup...