Breaking
How To Get Your Startup Business Off The...
How To Create A COVID Safe Construction Site
How to Make a Good First Impression at...
Volkswagen’s Truck Unit Ties Up With TuSimple On...
3 Lucrative Hidden Benefits Of Podcasting
U.S. Tax Court Affirms Most Penalties In Patel...
Your Stargazing Guide To Fall: One ‘Halloween Blue...
Mnuchin: White House Still Supports Direct Payments For...
How To Retain Your First Startup Product Users
China Shipments To The U.S. Are 7 Times...
Reviewing ‘The iPhone Of Air Conditioners’
The 8 Best CRO Companies of 2020
AARP BrandVoice: The Doctor Will See You Now,...
ThoughtSpot’s New Cloud-Based Tool Aims At Boosting Growth...
10 Ways Service-Based Businesses Can Generate Positive Word-Of-Mouth...
A Customer-Centric Culture Starts By Embracing This One...
Report: Struggling Black-Owned Businesses Need More Government Grants
Microsoft Races Ahead On RPA (Robotic Process Automation)
Why The Fed’s Outlook Paints A Sobering Picture...
Home Technology Amazon Helps World Health Organization Launch Covid-19 App 12 Months Early
Technology 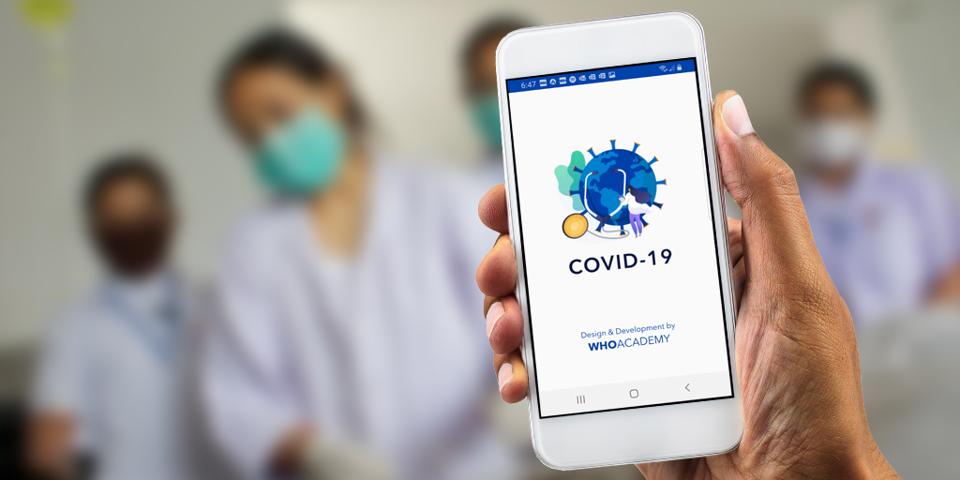 The World Health Organization (WHO) and Amazon Web Services (AWS) have exclusively told me how they have teamed up to create an app that helps health workers respond to the Covid-19 pandemic.

The app was designed around the needs expressed by 20,000 global health workers in a WHO Academy survey conducted in March this year.

The new WHO app.

The survey found that two-thirds of respondents feel they need to be moreprepared, particularly in infection prevention and control, case management, use of personal protective equipment (PPE) and other topics. And, overwhelmingly, respondents said virtual learning-on-demand was crucial. That requires a system which is well-informed and can be easily, quickly and continually updated.

So, the app is designed to provide access to knowledge resources, educational material and up-to-the-minute guidance and tools.

The scale of this endeavor is extraordinary, and is brought home by how fast the bank of knowledge is expanding, with ever more open-source information such as articles and reports.

The WHO says its system picked up the first article at the end of December 2019 and by mid-March was collating more than 120,000 articles on the subject of the outbreak every day.

Which makes it even more remarkable, then, that AWS has managed to bring the deployment of the app forward by a full year: it is available on the Apple App Store and Google Play Store now.

Obviously, reaching a Chinese audience is important for an app like this. For now, though, it is accessible in China via the Apple App Store. Issues with Google prevent the Google Play Store app from being available there. However, the WHO is also exploring the options for releasing an Android version which will reach health workers in China.

The AWS involvement goes a lot further than just the app, by supporting the WHO with sophisticated cloud tech, technical knowhow and more.

Tracking the spread of Covid-19 is key to increasing understanding of the disease and AWS is seeking to help accelerate efforts to do this and to understand the outbreak better. Only with that understanding can the spread be contained.

So, the WHO has a Covid-19 interactive map which it calls a situation dashboard, designed to offer a daily update on the latest global numbers of Covid-19 cases. It’s also broken down by individual countries.

“Thanks to support from tech companies, WHO was able to enhance the Covid-19 situation dashboard. Countries can rely on this data to see how well certain interventions are working in other countries, to help them decide whether to do the same,” WHO Chief Information Officer Bernardo Mariano explained to me.

Knowledge is power, and the data analytics expertise which AWS brings is felt by many to be second-to-none. It is providing automatic web content extraction and something called open object storage. This makes it possible to retain huge amounts of information which is unstructured. Altogether, it means that the WHO can share all-important epidemiological data widely. It can go to its staff, of course, but also public health bodies, WHO member states and other health organizations. And quickly.

Then there’s the WHO EIOS, that’s the Epidemic Intelligence from Open Sources Initiative, which is designed to work as a kind of early-warning system. Open-source information, like news articles and reports, can be used to identify and verify potential public health threats. The EIOS system already has an important job in managing, filtering and – perhaps most importantly – contextualizing information on health topics. It was this system that picked up the first article on Covid-19 back in December.

AWS is now working to develop a tool aimed at collecting and analyzing huge volumes of Covid-19 content more effectively. Crucially, it will use machine learning to tell the difference between reliable and unreliable content, making it more efficient for the right content to make its way to experts to assess. Mariano sees this as part of Amazon’s unique contribution: “This is where we are really seeing the power of AWS.”

Scale is important, too. The WHO website has seen a near 800% increase in traffic since January – not surprising during a global pandemic – so AWS is said to be providing “increased computational capacity” to allow the site to scale rapidly and cope with the surge in demand.

Of course, computers only get you so far. Frontline responders remain the most important link in the chain.

Still, AWS has been able to help in terms of something called OpenWHO. This is the organization’s online platform where healthcare professionals and others can access a catalogue of training courses. WHO’s challenge has been to make the content, especially video, available more widely by offering it in multiple languages.

The app taps into the WHO extensive database.

AWS is providing machine learning and media services to speed up production in different languages. As it develops it’s hoped it will reduce the turnaround time on each piece of content from days to a couple of hours.

Larry Pizette, Director, Amazon Machine Learning Solutions Lab, told me how it will happen: “AWS worked with the WHO to build a custom solution using AWS Machine Learning services to quickly translate learning material available on OpenWHO into multiple different languages. The solution transcribes and translates audio to create captions. To start, the WHO uploads video content and then Amazon Transcribe uses automatic speech recognition to convert it into text. This speech-to-text transcription preserves alignment with the original audio, allowing them to save and display the output caption files and edit the transcriptions if needed. Then, the captions are translated into the preferred languages by Amazon Translate and inserted back into the video.”

Like many other companies worldwide, AWS, and Amazon, are helping with fundraising support.

It’s hard to overestimate the importance of big data in approaching a world health emergency, and few companies can match the power of AWS.

Will it bring a vaccine any closer? Not directly, perhaps, but the effect it could have on saving lives is palpable.

Your Stimulus Debit Card May Have Been Delivered. Here’s What To Do If You Threw It Away

How Dr. Weil Lifted My Team’s Spirit During The COVID Crisis