Breaking
John Kerry As Presidential Climate Envoy: Virtue Signaling...
Increased Risk Of Chronic Conditions Associated With Early...
Top ETFs This Week As Dow Ends Day...
As Biden Admin Eyes Canceling Student Loans, Taxpayers...
How Social Media Is Helping Cryptocurrency Flourish
Here’s What You Need To Know About AstraZeneca’s...
Mini Gifts: What To Get For Your Colleagues...
Report: Biden Picks Janet Yellen For Treasury Secretary
Policy Priorities
How To Poise Your Business For Success (And...
Eight Key Steps To Landing Your Product In...
Brands That Are Redefining Black Friday
How Much Room Is There For E-Kick Scooter...
Why We Must Update The Law For The...
The Tax Rules For Home Businesses And Working...
How To Use The ‘E.R.I.C.’ Framework To Tackle...
Home Business Amazon Prime Now Has 3X More Movies Than Netflix
Business 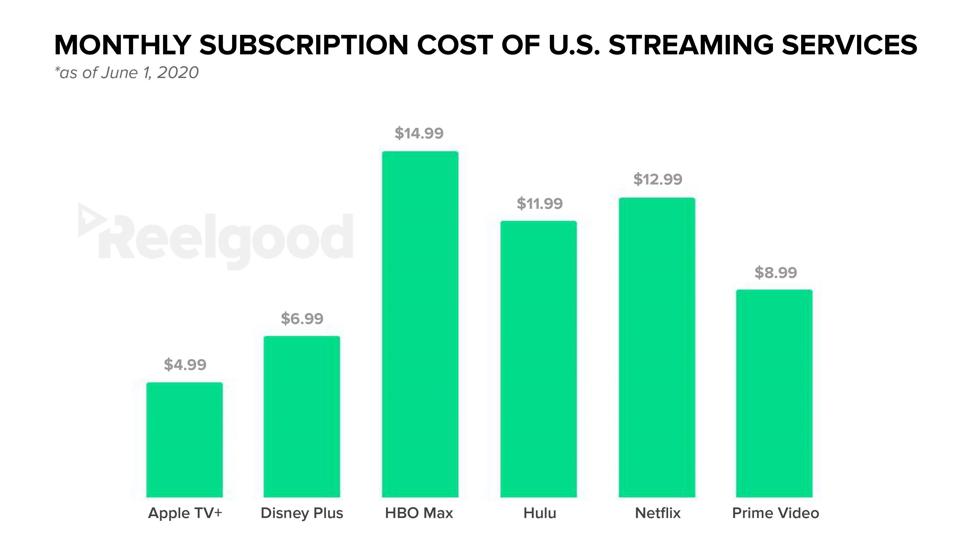 Netflix may have more subscribers than Amazon Prime, but Prime has more than three times as many movies as its archival, according to a new report by ReelGood, a streaming service aggregator.

That massive difference, however, narrows when you look at high quality movies. When you look at quality movies — 6+ rating on IMDB with at least 300 votes — Prime’s advantage narrows considerably: 568 to 424. That makes sense: if you’ve puttered around in Amazon Prime much, you will find some extremely low-budget shows, including some that look to be home-made.

The entire streaming market is extremely competitive right now, and it’s not just about Amazon and Netflix. HBO Max and Hulu are significant competitors as well.

In fact, HBO Max is right at Netflix’s heels on high-quality movies.

“Looking at the sheer number of movies currently available through each of these platforms, it’s pretty obvious Prime Video wins,” says Reelgood’s Maria Santos. “When it comes to high-quality movies, Prime is still the winner. For second place, it’s a close call between Netflix and HBO Max, with each one having 424 and 421 high-quality movies respectively. Considering HBO Max just launched two weeks ago, the service seems off to a good start.”

If you just look at sheer quantity versus subscription cost, however, Prime leads all contenders. In terms of TV shows, here’s the ranking:

In terms of movies per dollar, the numbers are even more lopsided:

In this context, Apple TV+ doesn’t look like a very significant competitor, seemingly little more than an afterthought from Apple. Apple has however begun to acquire more content after initially pursuing an original content only policy.

So what’s the best value?

For sheer quantity, it’s hard to beat Amazon. For quality, Reelgood says that Netflix and Prime Video are neck and neck. And for per-dollar value, Netflix and Hulu trail Amazon’s offering significantly. 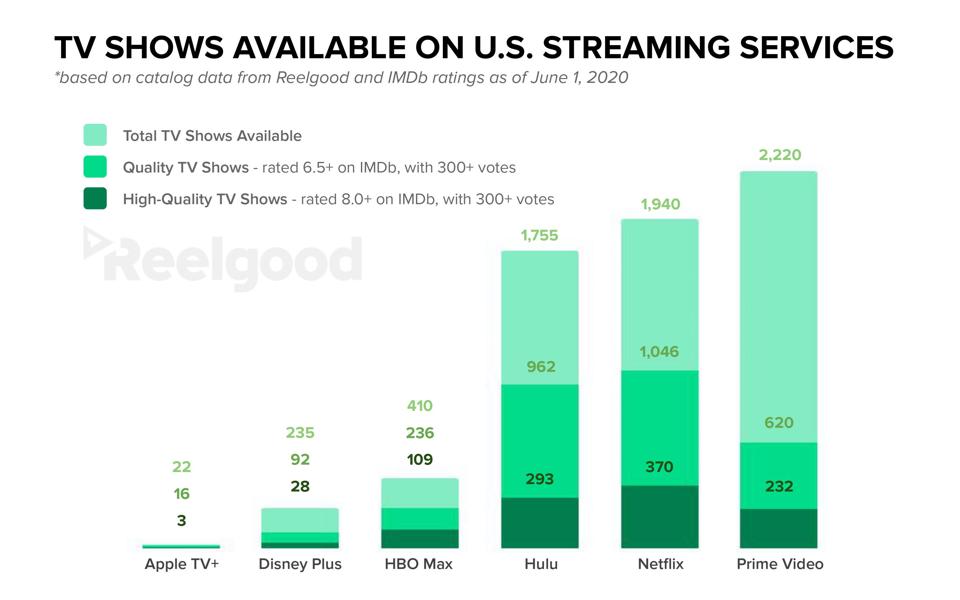 What I will say, however, is that all the content in the world is no good unless you can find it. And not only does Netflix have some of the best content recommendation engines in the world, its user interface is probably the best in the game.

Amazon’s Prime Video interface is a little clunky, Apple TV+ suffers from complexity: mixing for-sale content with streamable content with — if you enable it — content from a number of other services. Disney+ has a very simple and clean interface, but then again, it doesn’t have that much content to navigate.

Ultimately, it comes down to the content you want, and it’s hard to go wrong. Netflix has almost 200 million subscribers, and Amazon Prime Video has close to 150 million.

“If you’re in it for critically acclaimed films, get yourself a Prime Video subscription. And if you’re a sucker for highly-rated TV series (most of which are originals), Netflix is your best bet.”

Her full report is available here.

Moms Are Not Okay: Pandemic Triples Anxiety And Depression Symptoms In New Mothers