Breaking
Best Incentive To Get Vaccinated: Money, Messaging, Or...
Page Level Query Analysis at Scale with Google...
How A CIO Can Align IT With Business...
Blogger of the Month: Jo, Girl Eats World
6 Things Women In Business Know That Men...
How to Use First-Party Data for Ad Personalization
Pressing Reset—Putting A Fallen Unicorn Back On Its...
How We Went Viral: Promoting Content with Influencers,...
Blame Olympic Record Price Tag For Return To...
Apple iOS 14.5 Release: Should You Upgrade?
Why Gaming Gear Company Razer Launched A $50...
Technical SEO Implementations to Increase the Impact of...
30 Brilliant Ways to Market Your Eco-Friendly Shopify...
15 Tech Industry Leaders Share Overused (And Misused)...
How to Use Amazon Posts to Promote Your...
U.S. House Passes Bill To Create First Crypto...
Home Business Amazon Prime Order Of Book ‘Feminist Cross-Stitch’ Arrived With ‘Trump 2020 MAGA’ Inscribed Inside
Business

When a Wisconsin Amazon shopper placed an order for the book Feminist Cross-Stitch: 40 Bold & Fierce Patterns by Stephanie Rohr (Sterling Publishing, 2019) on Amazon on February 1, she didn’t expect the book to arrive with the words “Trump 2020 MAGA” written in black on the bottom of the otherwise blank inside cover page. The book arrived via Amazon Prime on February 2. The customer, who asked to remain anonymous, is a 31-year-old mother of three who started cross-stitching a few months ago to help her deal with anxiety. 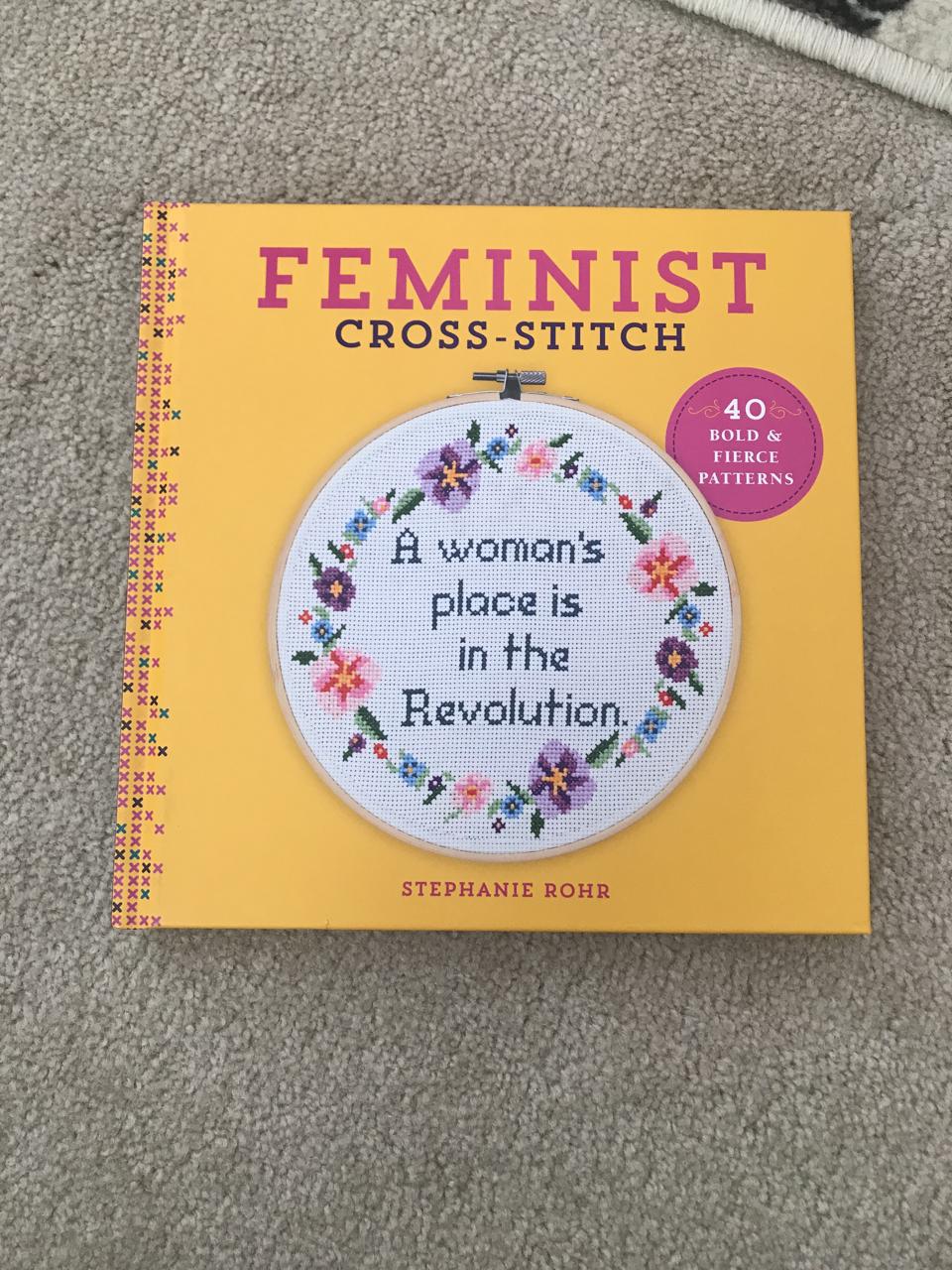 A copy of Feminist Cross-Stitch by Stephanie Rohr ordered from Amazon arrived with the message … [+] “Trump 2020 MAGA” inscribed inside.

In an email interview, she said she has been an Amazon Prime member for “countless years” and has never had a problem shopping with them before. She’s a novice cross-stitcher who discovered the book while browsing Amazon for books on the subject. She says she ordered the book directly from Amazon, and it arrived from an Amazon distribution center in Kenosha, Wisconsin.

Asked what she thought upon seeing the inscription, she responded, “My heart fell into the pit of my stomach. I am not a super politically-charged, politically-vocal person. But I am far from a fan of our current president. I think he is a disgusting person and don’t agree with him in any capacity. His morals and ethics are vile. The fact that someone took it upon themselves to deface my property to feel like they ‘won’ in some way is beyond childish and infuriating. Then I thought, Is it a joke? I immediately found Stephanie’s social media and messaged her via Instagram. I asked, ‘I’m assuming this isn’t supposed to be there?’ She was as equally upset as I was.” 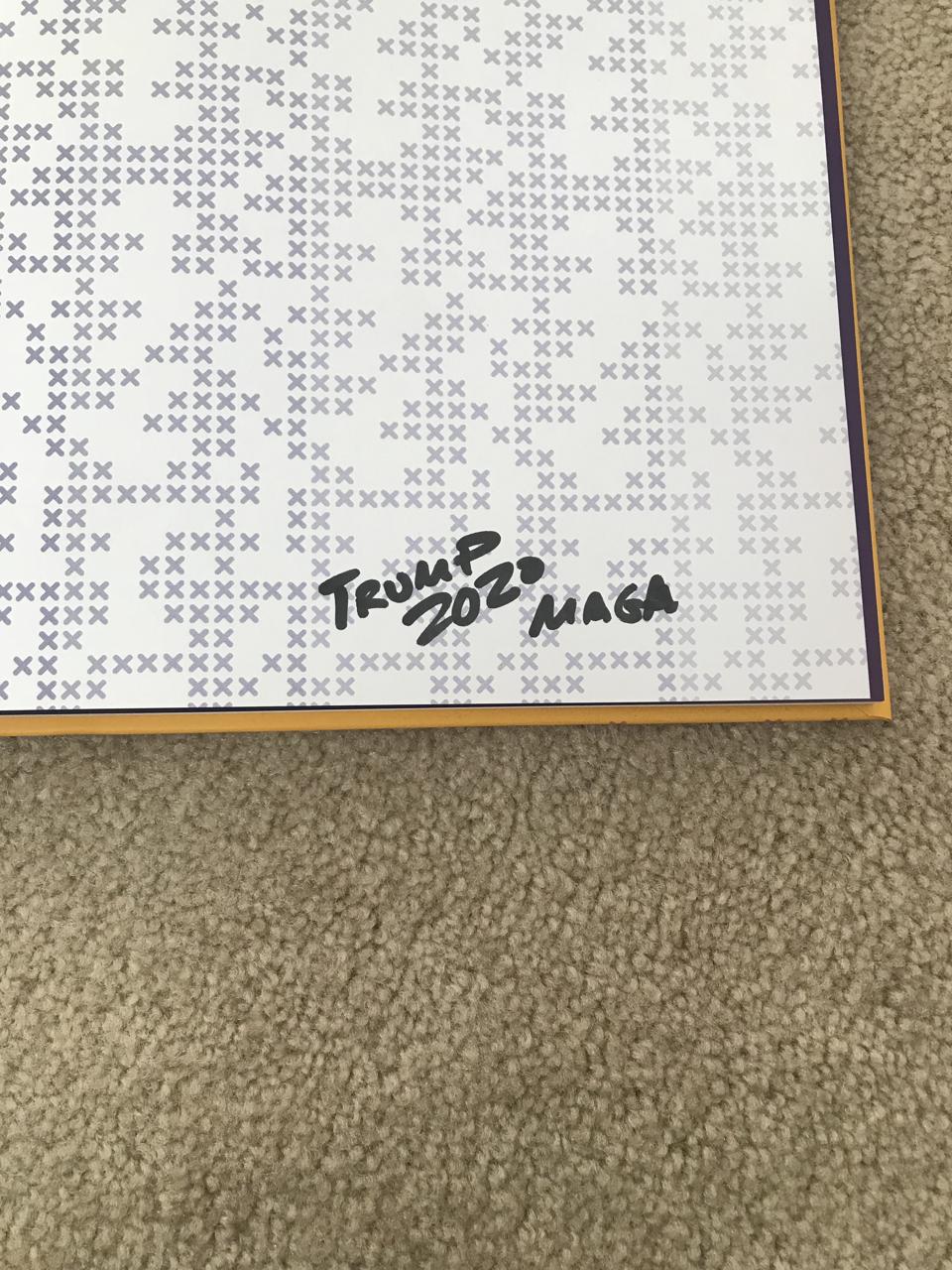 A Wisconsin Amazon Prime customer received a copy of Feminist Cross-Stitch by Stephanie Rohr with … [+] the words “Trump 2020 MAGA” written in black inside.

The customer contacted Amazon Prime and filled out their requested report about the purchase. “They were very quick in their responses and with five hours they ensured me they are investigating the distribution center and offered either a replacement or a refund.” She chose the refund, and noted that Rohr offered to send her a new copy before she’d heard back from Amazon. A representative for Sterling Publishing, which is owned by Barnes & Noble, said they have contacted Amazon about this matter and asked them to investigate.

Rohr took to Instagram on Sunday to share the message, writing, “I am so furious. This is the last thing I want someone who opens my book to see…Even if this is an isolated incident it is so symbolic of the dark moment in history that we find ourselves in. But the thing is, cowardly acts like this that are meant to scare us will only make us fight harder and stitch faster.”

In an interview, Rohr told me, “I felt terrible that she opened my book and saw that message, which was obviously put there to offend and intimidate. I encouraged her to report it to Amazon, and I asked if she would provide me with photos and screenshots of her order info and her correspondence with Amazon, which she did. I plan on personally sending her a signed copy of my book as a thank you for letting me know about this issue. We communicated on Instagram DMs and then she sent me an email with the photos and screenshots.”

Rohr hopes that Amazon will “tak[e] a real interest in figuring out how this happened and assur[e] me that it will not happen again. I am now concerned that this may not be an isolated incident and there may be more defaced copies of my book being sent out to customers.” An Amazon spokesperson said, “We take these matters seriously and have reached out to the customer to apologize for the experience and have refunded her order. This does not meet the high standards we have for serving customers and the individual responsible is no longer employed at Amazon.” Feminist Cross-Stitch is currently number three on Amazon’s cross-stich bestseller list.

Asked to elaborate on the “dark moment” caption, Rohr said, “I meant that our current president has come to symbolize regressive politics, racism, misogyny, and fascism. What ‘Trump 2020 MAGA’ stands for is so well understood that those words can be weaponized and put into a book that has opposite values. That his supporters are fueled by so much hate that a book about feminist crafts angers them to the point of vandalizing a book in order to intimidate and upset someone who would purchase a book like that.”

Rohr was particularly offended by the means of communication used by whoever wrote the message. “As an author and artist who puts political and feminist content out into the world I expect a certain amount of hate to be directed at me. But I never want my customers or fans to bear the brunt of that,” she explained. “Many people use cross-stitch and other crafts as a method to relieve depression and anxiety, especially around the current state of the world. It is supposed to be their happy place, or even their safe space. So seeing those words in my book is such a violation of that wonderful sense of safety, creativity, and fellowship that we have worked so hard to create.” Rohr noted that the book is available via Barnes & Noble and IndieBound, and is also selling autographed copies of the book via her website.

Asked whether this experience will impact her future book shopping, the customer said, “I fully realize this is not a reflection of Amazon. It is a reflection of humanity and the current frictions within our society. Amazon has done everything right from my end. They were quick within their responses and are taking the matter seriously. We don’t truly know who is at fault, but we all know where the hostility has come from.”