Breaking
OpenSooq, The Best Website to Buy Used Cars...
Hot Tips to Reduce MacBook Pro Fan Noise
How to Make the Most Out of Your...
7 Examples Of Using AI For SEO
Why you Should Always Try the Demo Slots...
How to Launch a New Restaurant Business
Start the Year Debt Free
How to clear a browser cache on a...
Which are the best software providers of slots...
How Investing Can Help You Save For Retirement
Top progressive betting strategies for slot machines
Key Software Tests to Conduct Before Product Launch
Why so many people play slots online in...
Why businesses should prioritise Cyber Security
What You And Your RTO Business Need To...
4 SEO Trends for Websites You Should Not...
Home General AMD Expands Zen 3 Into Laptops At CES 2021
General 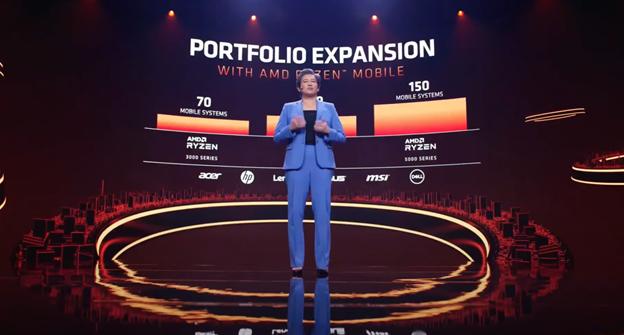 AMD’s CEO, Dr. Lisa Su, was back again this year delivering the company’s CES 2021 Keynote, which the entire industry watched intently. 2020 was an excellent year for AMD, and that started at CES 2020 with the announcement of the Ryzen 4000 series in laptops. While AMD has not fully reported 2020 year financials, expectations are high for AMD’s Q4 and full-year 2020 results. The company has made a significant turnaround in both consumer and enterprise CPU and significant progress on GPU. AMD is now in a leadership position on desktop CPU, which the company has not had in over a decade, and the industry expected this to trickle down to laptops.

AMD’s Ryzen 5000 HX series of notebook processors currently consists of two processors, the Ryzen 9 5900HX and the Ryzen 9 5980HX. Both CPUs are eight core designs with 20MB of L2 and L3 cache and boost 4.6 and 4.8 GHz. These chips have a TDP of 45W+, which we assume means 45W most of the time, except in specific scenarios, but at this moment, we don’t know what that entirely means other than these are very high-performance processors. These are the processors you would expect to see AMD putting up to compete against Intel’s latest 11th Gen gaming processors that I covered earlier this week. Numerous OEMs have already committed to using these chips in their gaming laptops, including Acer and ASUS.

As a whole, I think AMD’s overall laptop lineup has become more complete and attractive to OEMs and consumers and that’s why AMD has managed to continually grow the company’s overall laptop design wins year over year. In fact, in only two years, AMD has managed to double its overall mobile design wins from 70 systems with the Ryzen 3000 series to 150 mobile systems with the Ryzen 5000 series. This shows that OEMs are embracing AMD’s CPUs both in desktop and mobile in ways that they never had before. In fact, Lisa Su had the CEOs of HP and Lenovo as well as Microsoft’s Panos Panay ‘on stage’ to talk about their relationships with the company which shows the buy-in from the biggest players in the industry. AMD will have to overcome Intel’s experience branded approach with Evo and vPro for the utmost levels of success. I think AMD will also have to find a way to deal with Intel’s debunking of its battery-powered performance and “RUGs” (Representative Usage Guides).

Overall, AMD has shown this CES that the company’s momentum is only gaining in the mobile market and that the Zen 3 architecture is showing strength all the way from low-power mobile all the way up to high-performance computing. Last year’s CES was a showcase of what AMD has managed to accomplish in its comeback to competition and this year’s CES was a victory lap to show how far the company has truly come. I hope to see more from AMD on the GPU front later this year and if the company’s overall momentum can help it overcome some challenges on the GPU front, even though I do believe tha the RDNA 2 architecture and 6800 XT have shown significant promise.