Breaking
How To Get Your Startup Business Off The...
How To Create A COVID Safe Construction Site
How to Make a Good First Impression at...
3 Lucrative Hidden Benefits Of Podcasting
Your Stargazing Guide To Fall: One ‘Halloween Blue...
Mnuchin: White House Still Supports Direct Payments For...
How To Retain Your First Startup Product Users
China Shipments To The U.S. Are 7 Times...
Reviewing ‘The iPhone Of Air Conditioners’
The 8 Best CRO Companies of 2020
AARP BrandVoice: The Doctor Will See You Now,...
ThoughtSpot’s New Cloud-Based Tool Aims At Boosting Growth...
10 Ways Service-Based Businesses Can Generate Positive Word-Of-Mouth...
A Customer-Centric Culture Starts By Embracing This One...
Report: Struggling Black-Owned Businesses Need More Government Grants
Microsoft Races Ahead On RPA (Robotic Process Automation)
Why The Fed’s Outlook Paints A Sobering Picture...
As The End Of 2020 Approaches, The Cybersecurity...
Do Businesses Have A Role In Solving Poverty...
Home Business ‘American Idol’ Alum Gabby Barrett On Scoring One Of The Biggest Country Hits Of 2020: ‘It’s A Wonderful Feeling’
Business

‘American Idol’ Alum Gabby Barrett On Scoring One Of The Biggest Country Hits Of 2020: ‘It’s A Wonderful Feeling’ 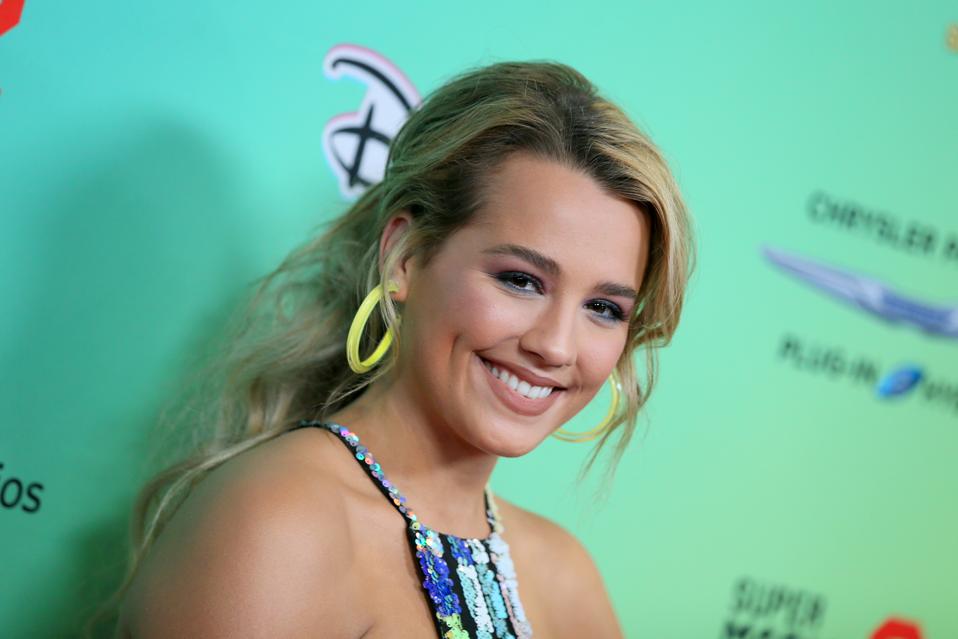 It has now been almost two years since Gabby Barrett came in third place on the sixteenth season of American Idol, losing the competition to Caleb Lee Hutchinson and Maddie Poppe, who was crowned the champion of the first season since the show returned. Since then, both of those two artists have failed to make much of a commercial impact, while Barrett has landed one of the biggest country smashes of the year.

Barrett’s breakout track “I Hope” has thus far lifted as high as No. 16 on the Hot 100 and it’s reached the No. 1 spot on Billboard’s Country Airplay, Country Streaming Songs and Country Digital Song Sales charts, though it’s stalled at No. 2 on the Hot Country Songs list.

In nearly no time, “I Hope” has become a surprising blockbuster in the country field, and it has set Barrett up as a possible breakout star in the genre.

I had the opportunity to speak with Barrett about her massive new single, when fans might hear more from her debut album and whether or not she still treasures her time on American Idol.

Hugh McIntyre: “I Hope” just recently broke into the top 20 on the Hot 100 which is huge, to see a crossover hit like that. What does that feel like to you?

Gabby Barrett: Oh my gosh. Yes, it’s amazing. I saw that it jumped up to No. 17, I think, on the Hot 100. All the fan pages are on everything before I can even know what’s going on. So, yes, I did see that it jumped and that’s absolutely amazing. I didn’t know what was going to come from the song when we first wrote it, and we put it out independently, let alone all of this. And, now, with it being my first number one and now it’s going to spill over, hopefully, into the pop world with the remix that I have of Charlie Puth when we take it to radio there. Being on the Hot 100 is absolutely amazing. Especially, I feel like I appreciate it all the more because it’s my first single that we’ve been really pushing. So, it’s really exciting.

McIntyre: The song is doing well on the Hot 100 but, as you just said, it’s number one on at least one or two country charts. How does it feel to be welcomed so warmly by the country world?

Barrett: Oh, it’s a wonderful feeling because I started coming into the Nashville scene, seriously, probably about two and a half years ago. And, so I know that it is such a family-based, very tight community. And I’m very, very grateful that everybody’s been so kind to me and it’s been a huge blessing. They just opened their arms wide to me and I still can’t believe all this is happening. It’s just surreal. I never thought that it would happen this fast, I would pray about it, see where the Lord would take me, and now it’s just amazing to sit back and watch. I feel very honored.

McIntyre: Now, tell me about how Charlie Puth came to be on the new version of “I Hope.”

Barrett: It’s actually pretty simple. It happened really easy. Charlie posted “I Hope” on his Instagram story, and put, “Wow,” as the caption and tagged me in it. I saw it and thanked him, and then he messaged me back and he said that he wanted to remix on it. He wanted to be on it. And so I was like, “Oh my gosh.” So he ended up remixing it and quickly threw his vocal take down on the song, and our teams connected, and now we have a new version of the song.

McIntyre: So, is there a whole new plan for radio and new promotion? Maybe a video. What’s the plan to push it?

Barrett: I don’t know, exactly, what’s going to come from it. I hope that we’ll be able to do live television performances and whatnot. I haven’t really gotten to do too many live performances of the song on my own, let alone if I get to do it with Charlie, that’d be awesome, as well. So we don’t know but we know that we’re going to be taking it to a pop radio sometime soon. So we’re excited about that.

McIntyre: Yeah. Now, the song is approaching its one year birthday. Tell me a bit about the writing of the song and how it came together.

Barrett: I wrote it in October of, actually, 2018. So, this October it’ll be two years. Two friends of mine, Zach Kale and Jon Nite, also wrote it. And how it came together, it was us hanging together. We weren’t even really set to write that day. It was just a quick come in. And, so, we came in and they had the idea, they said, “Let’s write a song where the guy does the girl bad and then the girl’s wishing the guy well in the end. And she pretends she’s fine, and doesn’t care, and it’s just a chip off her shoulder.” And I was, I think, 18 at the time.

And I was like, “Yeah,” I thought differently about that when I was done wrong in high school by one of my first few boyfriends. So I was like, “That’s not going to work. We’re going to have to write from a real perspective of how people end up feeling when they get done wrong.” And, so, I wrote from my ninth and tenth grade perspective of a girl being mad in a relationship and I just thought the song would be really relatable to people because, I believe, every single person, I would say, goes through some type of bad relationship whether it’s personal, family, whatever it is. And, so, people really connected to it and I’m glad they did.

McIntyre: Tell me a bit about your time on American Idol. Do you think that it is beneficial to you at the moment? Do you not think about that anymore? Where does that lie in your career?

Barrett: Oh, I’m very grateful for American Idol and I always will be. I think Idol has been such a wonderful platform for me to step onto, and be a part of, and they’ve always treated me very kindly, and have been very supportive of my music and myself. I will always keep that as a highlight in my career for the rest of my life. And I think it’s good because a lot of, well, some more, of my following came from American Idol, and stayed. And it’s really cool to see those OG fans that stayed from Idol and watch my story. And it’s cool to even see the people before American Idol, when I started performing when I was 11, to see them still be supporting me. And then all the new fans from “I Hope” and everything that that’s brought. It’s just really cool to see everything mixed together, play out well.

McIntyre: You’re just pushing the Charlie Puth remix, now, but have you thought about the next single? Do you know kind of what comes after this?

Barrett: I’ve been talking with my team and we’re actually just trying to figure that out now. I don’t know which one it’s going to be. We have a lot of songs in the works. I’ve been writing for over a year and a half, I’d probably say two years, now, because I’m going to have an album come out this year, which I’m really excited about. So, we haven’t pinpointed an exact song because we don’t know which one to pick out of the group. But I’m just excited for people to hear music even after “I Hope.”

McIntyre: How’s the album coming along and when do you think fans will get to hear it?

Barrett: It’s good. It’s coming along really, really well. I’m so excited about this album. Like I said before, I’ve written a ton of music and we’ve had to narrow it down to which ones are the little gold pieces out of everything. And we’ve pretty much done that. Now, it’s just executing everything else. So, you can expect it later in the year. We don’t have anything exact right now and I can’t give too much away, I don’t want to get in trouble.

McIntyre: It’s rare to see an artist so new do so well with their first single, and in country it’s even rarer for a female artist. Is that something that you actively want to change about the industry or is it just a happy coincidence?

Barrett: A few people have asked me about the women agenda on country radio. I can only speak for myself on this, and all I have to say is that I’m very grateful, and thankful, that country radio has been so automatically accepting, and supportive, of me and my music. Especially, with “I Hope,” it’s been really, really cool to watch. And I think there’s a lot more room for both men and women to be on the radio more and for radio stations to play good songs. So I’m excited to see what they will play in the future and I grew up listening to a bunch of wonderful women on the radio. I’m just glad to be making country music in this generation right now.

How to Improve Your Customer’s Journey