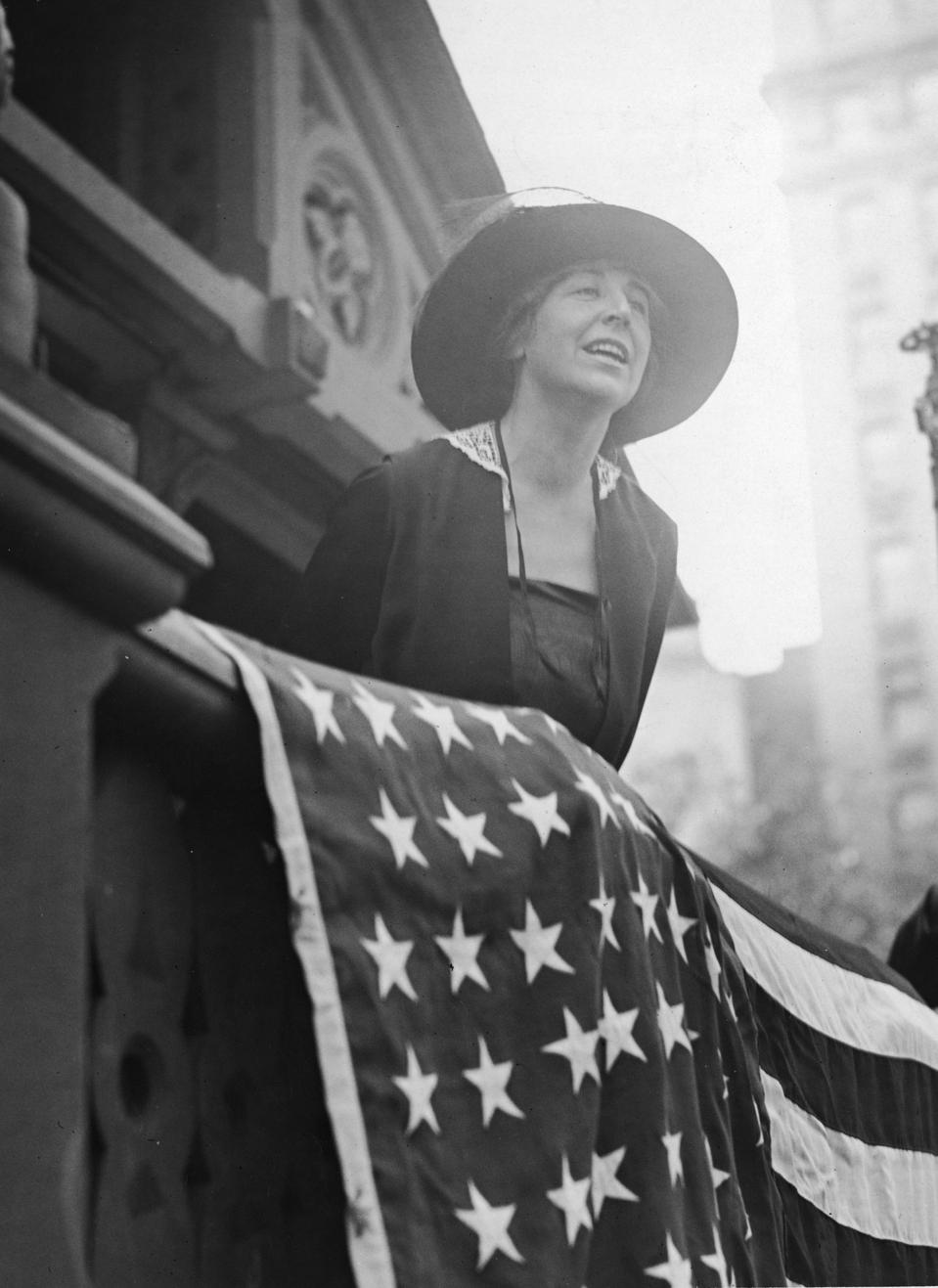 American pacifist leader and former congresswoman Jeannette Rankin (1880 – 1973) addresses a rally … [+] at Union Square, New York, New York, September 1924. Rankin became the first female member of Congress when she was elected to the House of Representatives as a Republican from Montana in 1916. Rankin was reelected to Congress in 1940 and was the only member to vote against US entry in both World War I and World War II. (Photo by FPG/Getty Images)

In the year 2020, it feels like to be heard people have to be loud and somewhat abrasive.

This seems to have always been the case for women. Especially 100 years ago, when females did not have universal suffrage, among other civil rights.

A century ago, and somewhat still in the present, there are those that believe women should be quiet, demur, and subservient.

Fortunately, there were women who didn’t feel this way and amid rapid industrialization, urbanization, and technological innovation at the turn of the 20th century, they spoke up.

They fought against resistance to change brought on by the rise of the Ku Klux Klan, racial violence, and Jim Crow laws.

Using their voices and power to become changemakers through running for office and organizing movements, these women were able to effect changes to immigration law, expand civil rights, launch anti-lynching campaigns, and fight for the right to vote.

Examining the women who pioneered these social changes a century ago, PBS presents the special American Masters – Unladylike2020: The Changemakers.

Timed with the 2020 presidential election and the women’s suffrage centennial, subjects include the first women in the U.S. Congress and State Senate, and a co-founder of the NAACP.

The women highlighted in Unladylike2020 are five little-known trailblazers such as  Martha Hughes Cannon, the country’s first female state senator; Jeannette Rankin, the first woman elected to the U.S. Congress; Mary Church Terrell, a leader in the anti-lynching movement and a founder of the NAACP; Jovita Idar, a journalist, and president of the first Mexican American women’s civil rights organization; and Zitkála-Šá, also known as Gertrude Simmons Bonnin, who lobbied for U.S. citizenship, voting rights, and sovereignty for American Indians.

Narrated by award-winning actor Julianna Margulies (ER, The Good Wife), and featuring the voice of Lorraine Toussaint (Selma, Orange is the New Black), the hour-long documentary examines the methods women used to overcome incredible odds and persistent resistance to forge the foundation of equality through political change.

Using a mixture of original artwork and animation, rare archival photos and footage, along with interviews with historians, descendants, amid analysis provided by modern-day thought leaders, the special establishes how these women and their actions continue to influence the status of equality today.

Executive Producer Sandra Rattley says that the special is timely because, “Two of our heroines, Mary Church Terrell and Jovita Idar, took a stand against lynching. In 2020, Congress is still debating the Justice for Victims of Lynching Act after 120 years of trying to make lynching a federal crime. I have no doubt these unladylike women would be protesting for justice today.”

Charlotte Mangin, executive producer and series creator, adds, “Our Unladylike2020 changemakers were critical to making the equality agenda part of the national fabric of this nation.”

The special is based on a multimedia series, created by the duo,  of 26 documentary shorts that launched in March on the American Masters YouTube channel. New episodes debut on Wednesdays through August 26th, which is Women’sEquality Day.

The hour concludes with the perspectives of contemporary female leaders on the lasting impact of these five women, commenting about how though much of their work began 100 years ago, it’s still unfinished today.

‘American Masters – Unladylike2020: The Changemakers airs on PBS. Check here for specific dates and times in your area.

Banks Made Billions On PPP Loans. Learn What They’re Doing With The Cash