Home Business America’s Colleges & Universities Awarded $12.5 Billion In Coronavirus Bailout – Who Can Get It And How Much
Business

America’s Colleges & Universities Awarded $12.5 Billion In Coronavirus Bailout – Who Can Get It And How Much 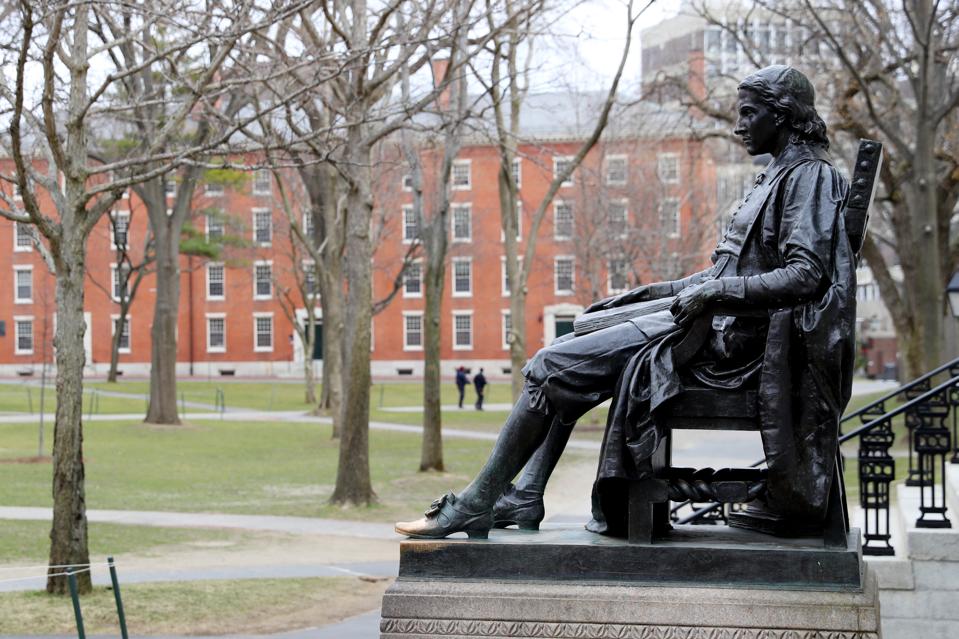 CAMBRIDGE, MASSACHUSETTS – MARCH 23: The Harvard University campus is shown on March 23, 2020 in … [+] Cambridge, Massachusetts. Students were required to be out of their dorms no later than March 15 and finish the rest of the semester online due to the ongoing COVID-19 pandemic. (Photo by Maddie Meyer/Getty Images)

Harvard decided not to apply for their $9 million share of the $2.2 trillion CARES Act – the Conronavirus Aid, Relief, and Economic Security Act, after President Donald Trump brought the issue into the national limelight. Princeton followed suit.

The other Ivies are still deciding whether to accept up to $62.9 million in CARES money — despite their collective endowment of $140 billion. However, our auditors at OpenTheBooks.com discovered that these funds are just the tip of the iceberg.

We scoured the backend of the U.S. Department of Education website and found the full database: 5,137 colleges and universities that were awarded $12.5 billion in coronavirus relief. None of it has to be paid back.

We created an interactive map on a state-by-state basis of the colleges and universities that were allocated the aid. (The institutions still must apply for the funds in order to receive it.)

Just click a pin (state) and scroll down to the chart beneath the map to see which college (by name) can receive how much taxpayer money. For example, you’ll find 530 schools in California, 389 in New York, 295 in Texas, 261 in Florida, and 260 in Pennsylvania. 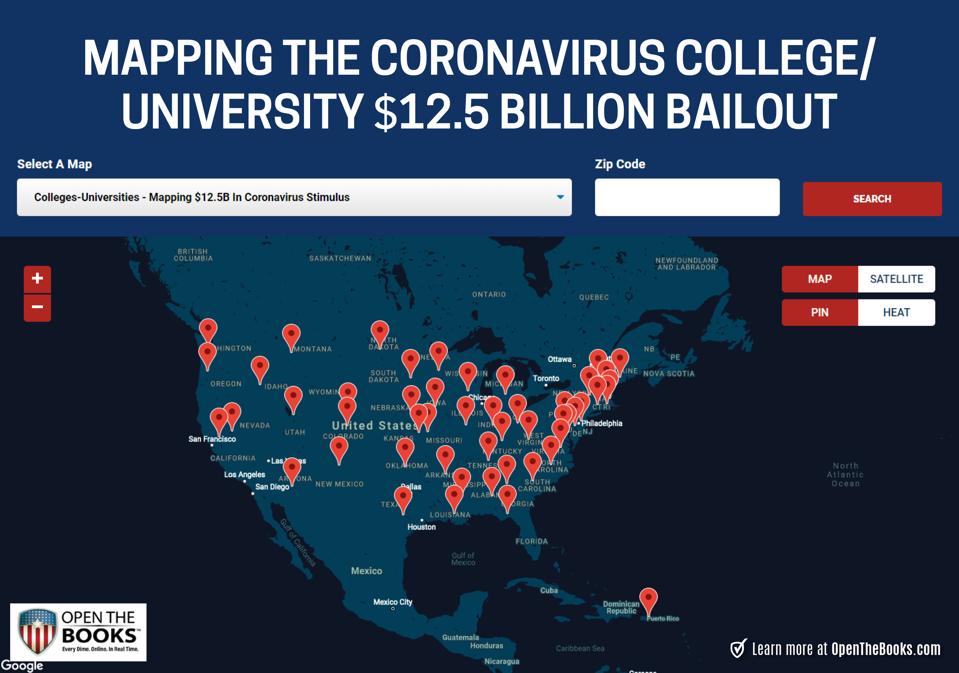 State-by-state map of the CARES Act allocation of $12.5B to higher education institutions.

Responding to our request for comment, Arizona State applauded and Central Florida was “grateful” for CARES Act funding.

Here are five facts you probably didn’t know about the coronavirus bailout of America’s colleges and universities:

#1. The $350 Billion Club: The 25 universities with the largest endowments were allocated $801.3 million in coronavirus subsidies. These wealthy institutions had $350 billion in their collective endowments.

Notre Dame was allocated a $5.8 million share ($8.4 billion endowment). However, the school told us that they aren’t going to even apply for the funds. Their share will be returned to the U.S. Treasury Department’s general fund.

An MIT spokesperson responded to our request for comment:

“MIT senior leaders are still reviewing information from the government, considering the range of needs facing our students, and determining how best to proceed.” 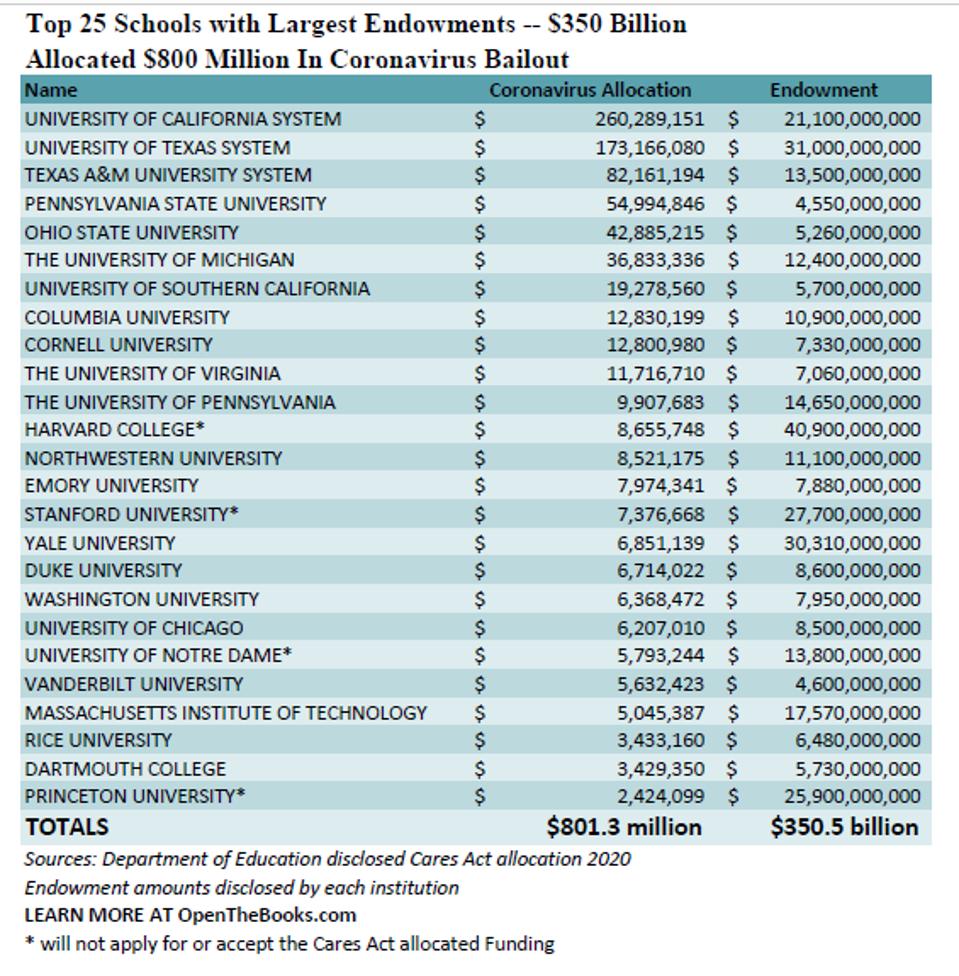 Top 25 U.S. colleges and universities with $350B in collective endowments are allocated $800M in … [+] coronavirus bailout from the CARES Act.

#2. Big 10 Conference is #1 – In the battle among the major conferences, the fourteen schools of the Big 10 Conference were allocated the most bailout money ($393 million) – an average of $28 million per institution.

For example, Indiana University (Big 10) has an endowment of $2.4 billion, yet they will receive $24.6 million in bailout monies. Recently, a student journalist failed to convince the university to use their endowment to mitigate student tuition. However, we found the president of the school made $3.5 million (2017-2019) and the IU Foundation employed his wife ($303,641) and daughter ($58,271).

Responding to our request for comment, IU decided to take the bailout and claims their billion dollar endowment can’t help out in the crisis because donors earmarked their gifts for other purposes.

The Pacific-12 Conference (Pac-12) was allocated $318 million. The University of Oregon will receive $16.1 million even though the school’s endowment approached $1 billion. The university chancellor earned $738,000 in salary with up to $200,000 in additional bonuses. Before the virus, students had been protesting program cuts and tuition hikes.

The Southeastern Conference (SEC) has fourteen schools and was allocated $280.2 million. The University of Alabama was allocated $20.7 million, despite the fact that the school employs the most highly compensated public employee in the nation. In the last three years, Alabama paid their head football coach Nick Saban a total of $29.2 million.

Responding to our request for comment, The University of Alabama contended that athletics are self supporting.

The top 10 worst schools were allocated $66 million despite reporting graduation rates between 4-9 percent. The U.S. taxpayer may want to know why these schools are even allowed to operate. 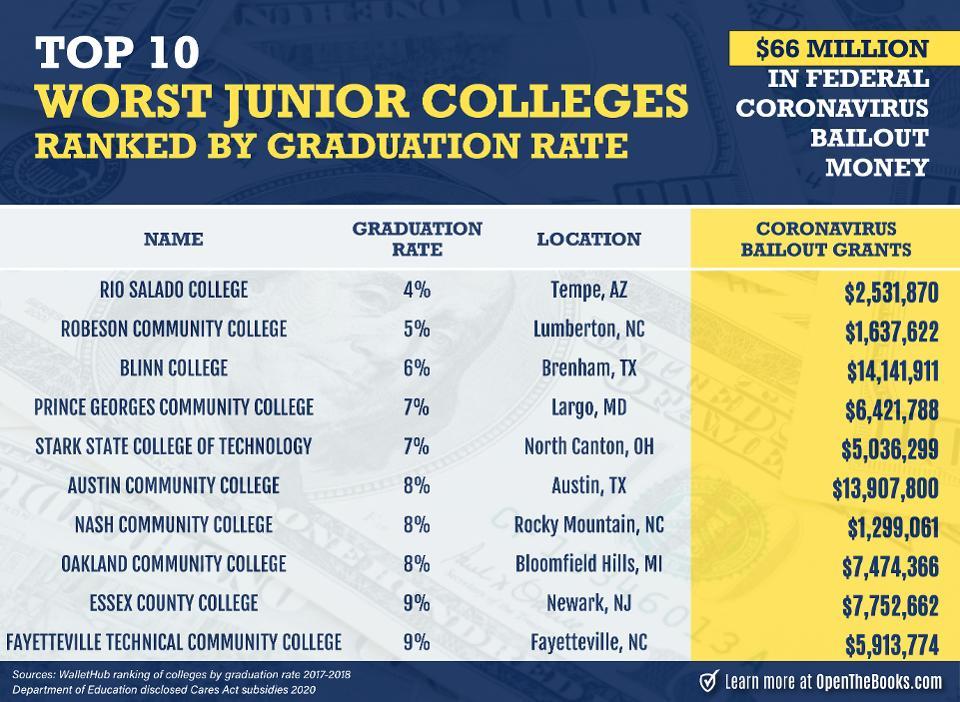 The Empire Beauty School was allocated the most coronavirus funds (nearly $18 million) even though the school admits to charging up to $22,100 in tuition and fees – exceeding the in-state tuition costs of all Big Ten universities except Northwestern. It’s a 35-40 week program and graduates are qualified to cut hair, manicure nails, and do massage therapy.

Empire Beauty did not respond to our request for comment.

Other non-traditional colleges were allocated money, including a professional golf college ($84,000); two schools of wooden boat building ($107,000); and a bartending and gambling school ($558,000). Twenty-four art academies collected a combined $29 million.

The rest of the aid, approximately $389 million, was allocated to the 128 institutions located in Washington, D.C., or U.S. territories, i.e. Puerto Rico, Guam, etc. 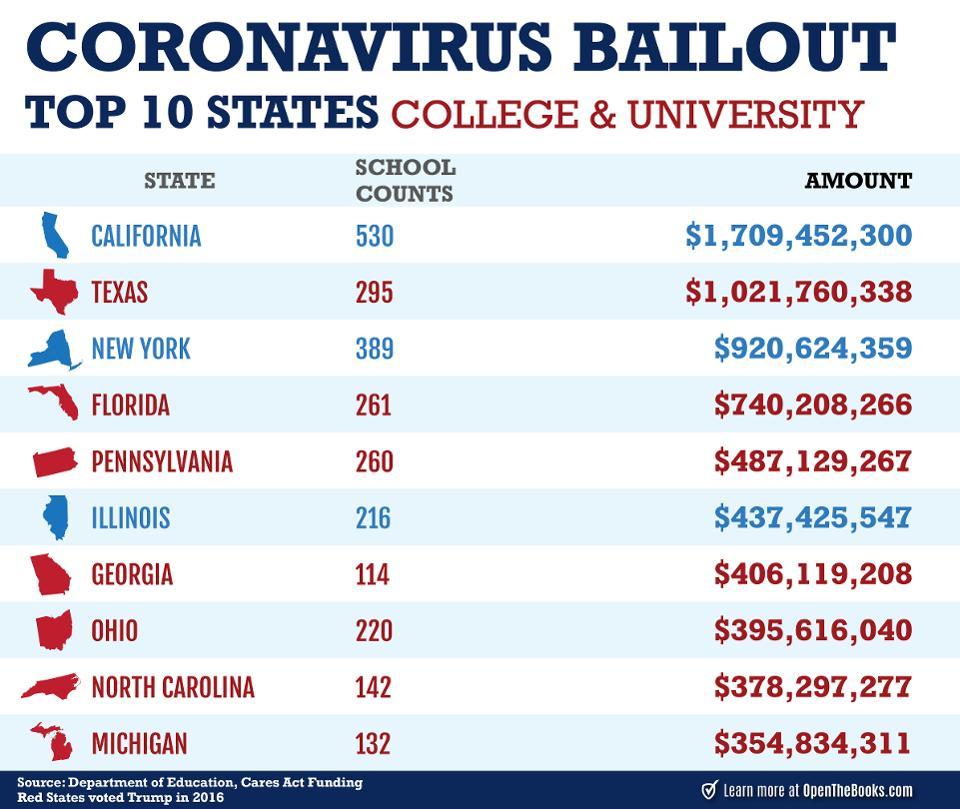 Red states vs. blue states in the allocation of coronavirus bailout money.

So, who was not allocated coronavirus bailout money?

There are sixteen U.S. colleges and universities that do not accept federal money. The most prominent are Hillsdale College in Michigan, Grove City College in Pennsylvania, and Patrick Henry College in Virginia.

In February, our team audited Hillsdale’s assertion of no federal funding and found their statements 100 percent true. Hillsdale has never taken any aid directly from the federal government. This has allowed the college to operate without government interference and with maximum institutional independence.

None of the sixteen colleges were allocated any coronavirus bailout money, either. These schools decided long ago to pay their own way.

Payment Protection Program: An Existential Threat To Business Owner Retirement And What To Do About It

What We are Missing in the Virtual World