An Updated Look At How Various Countries Are Fighting Coronavirus

Last week, the World Health Organization officially declared the Coronavirus outbreak as a pandemic. In an attempt to control the spread of the virus, countries across the globe have made strict foreign and domestic policy changes.  Though these policies are rapidly changing, the following list highlights key strategies implemented by some of the most significantly affected nations.

China: After months of turmoil, the Chinese government instituted strict quarantine and testing efforts. To much relief, these policies seem to have worked. Recent data indicates that the number of new cases in the country seem to be leveling off. Though this news is promising, the Chinese economy and people took a significant hit. Sources indicate that nearly 5 million people lost their jobs in the first two months of 2020, which will surely have significant repercussions for years to come.

India: Relative to its population, the rates of confirmed cases remains low in India, estimated at around 150 confirmed cases. Many are reporting that these low numbers are likely due to the Indian government’s early isolation strategy, as it was one of the first nations to announce expansive travel restrictions, including for travelers from the EU, UK, and for Overseas Citizens of India (OCI) generally.

Italy: One of the hardest hit countries in this pandemic thus far, Italy has reported more than 35,000 confirmed cases. The fact that Italy has the second-oldest population in the world doesn’t help the situation, as older individuals seem to have higher virus-related mortality. The government has continued to institute strict policies regarding outdoor activities, travel, and social isolation. However, through mass screening and testing programs, experts may have found a way to locally control the spread of disease. 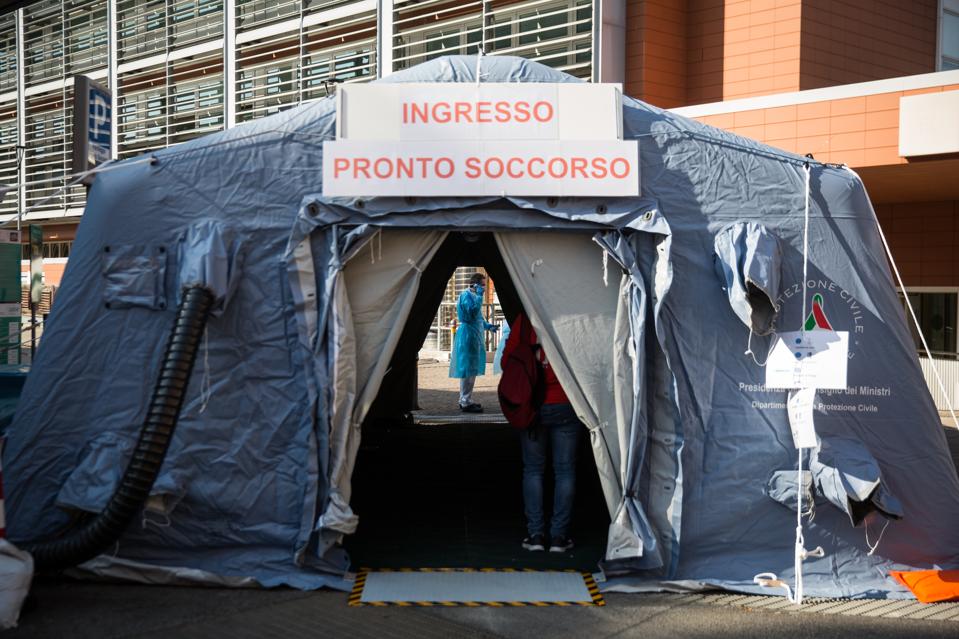 BOLOGNA, ITALY – MARCH 18: First AID in front of Sant’Orsola Hospital provided during the National … [+] quarantine on March 18, 2020 in Bologna, Italy. The Italian government continues to enforce the nationwide lockdown measures to control the spread of COVID-19. (Photo by Massimo Cavallari/Getty Images)

South Korea: South Korea is reporting a significant drop in confirmed cases. Much of this success has been attributed to expansive testing programs; nearly 270,000 people have been tested thus far. Though the virus is not completely cleared from the region yet, South Korea is another example which illustrates the benefits of widespread testing and containment policy.

United Kingdom (UK): The UK is reporting 2500+ cases, inspiring the government to take more drastic steps in containment and isolation strategy. PM Boris Johnson also announced in a press conference on March 18th that testing capacity would be increased to 25,000 tests per day in the weeks ahead.

United States of America (USA): More than 7,500 people have been infected. The Trump administration has issued strict travel restrictions for those entering the country from various regions, including from many European countries and China. Domestically, many states have issued sweeping curfews and isolation policies. The government is also considering a significant financial aid and relief package.

Although this list is by no means comprehensive, it highlights some of the more drastic policies and steps that various governments have taken. There is still much to be learned about this virus, including the intricacies behind its spread, long-term health effects, and treatment. However, till the scientific community is able to create a sustainable solution, a policy of strict isolation and containment may be the most viable avenue for governments to pursue.

AEW Dynamite Results: News And Notes After Luke Harper Is The Exalted One, Matt Hardy Debuts

Will Dip Buyers Be Punished?