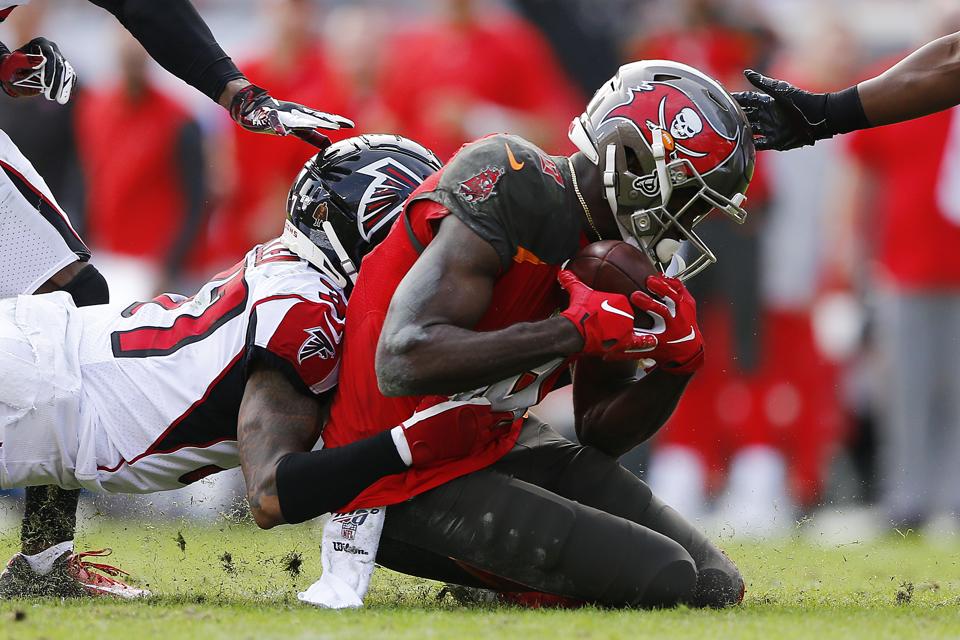 TAMPA, FLORIDA – DECEMBER 29: Breshad Perriman #19 of the Tampa Bay Buccaneers makes a catch … [+] against the Atlanta Falcons during the first half at Raymond James Stadium on December 29, 2019 in Tampa, Florida. (Photo by Michael Reaves/Getty Images)

NFL free agency has slowed to less than a crawl after three weeks of activity, thus this is a good time to try to evaluate how well the New York Jets fared in general manager Joe Douglas’ first free-agency go-round. Douglas and several of the Jets’ signees were made available to reporters via conference calls last week, so I will give Douglas’ and the players’ opinions, where applicable, followed by my own.

As always, the disclaimer is that no one knows how any of these player moves will turn out, least of all Douglas and the Jets. But analyzing them is what people do, especially the media.  So here goes.

Players will be listed in descending order by fully guaranteed money, with figures according to overthecap.com, unless otherwise noted

Douglas’ take: Connor McGovern is another guy who is smart and athletic.

McGovern’s take: The reason I’m with the Jets is because I think they’ve got the coaches and the players to win a Super Bowl. … They’re really starting to build something special with the quarterback and running back and now the offensive line and you know the Jets always have the defense.

My take: Douglas didn’t say much about him because he wasn’t asked specifically about McGovern by reporters. That probably is because McGovern, who played every snap for Denver last year and did not commit a penalty, has to be the answer at center as the centerpiece of a not-splashy group of signees. However, as espn.com reported, the contract is for $10 million fully guaranteed, not $18 million as originally thought.

The other $8 million is guaranteed for injury only, and would become fully guaranteed on the fifth day of the 2021 NFL league year.

As for McGovern’s optimism, he has the right attitude, but third-year quarterback Sam Darnold has yet to prove himself, partly because of injuries and illness. And running back Le’Veon Bell needs a bounceback year. The 2020 season, if indeed there is one, will be pivotal for both Darnold and Bell.

Douglas’ take: We’re excited about his athleticism. I think he’s going to be a good fit into our scheme. He’s going to have a great opportunity to come in and compete for a starting spot.

My take: At $8.85 million guaranteed this year, Fant must do more than compete for that starting spot. He must win it. Yes, the Jets could draft a left tackle at No. 11, but they have many other holes to fill besides offensive line, such as No. 1 wide receiver, and Alabama’s Jerry Jeudy and Oklahoma’s Cee Dee Lamb both could be in the mix at that juncture.

Fant is due another $4.45 million in guarantees if he is on the Jets’ roster on the fifth day of the 2021 league year. If he is not, this likely was an expensive signing that didn’t give New York much bang for its buck.

Douglas’ take:  Unique size and speed combo, obviously his career trajectory was different than most first-rounders. We’re really excited about his speed, his ability to take the top off a defense. We feel like he can come in here and make an impact and he’ll be able to come in here and develop a chemistry with Sam moving forward.

Perriman’s take: I bring a lot of speed, a lot of big playmaking ability to the team. … I feel like that was just a tiny glimpse and I’m looking forward to building from that little run I had last season.

My take: The “tiny glimpse” Perriman refers to is the small sample size at the end of last season, when injuries enabled the 2016 Baltimore first-round pick to join the starting lineup and put up 25 receptions and five touchdown catches in the last five games. But can he do it over the long haul the way that predecessor Robby Anderson did? Anderson got $12 million guaranteed from Carolina, and New York then pivoted to Perriman. As Douglas said, Perriman has the speed to get open deep. He also can catch the ball in tight windows. ﻿An intriguing gamble, but a gamble nonetheless.

Douglas’ take:  It’s great to get Alex Lewis back in the fold. He brings that element of toughness and nasty mentality that every offensive line needs.

Lewis’ take: It was familiarity with the Jets, how well I meshed with the coaching staff there, how much I enjoyed my time in New York. (Coach) Adam Gase and Joe Douglas gave me a second chance. The Ravens would have released me. There’s a lot that went into my decision to stay. And I’m happy that I did and I’m glad that we got a deal done and I’m looking forward to this new season.

My take: Lewis, acquired in a preseason trade with Baltimore, stabilized left guard after the Kelechi Osemele injury dispute. Of his guaranteed money, only $1.666 million is due after 2020, meaning the Jets can get out of the contract fairly easily. Lewis has been injury-prone, and missed the 2019 season finale because of an ankle problem, so perhaps that is the reason New York didn’t give him more of a long-term commitment.

Douglas’ take: Brian was a great signing last year and he really solidified the nickel spot for us. 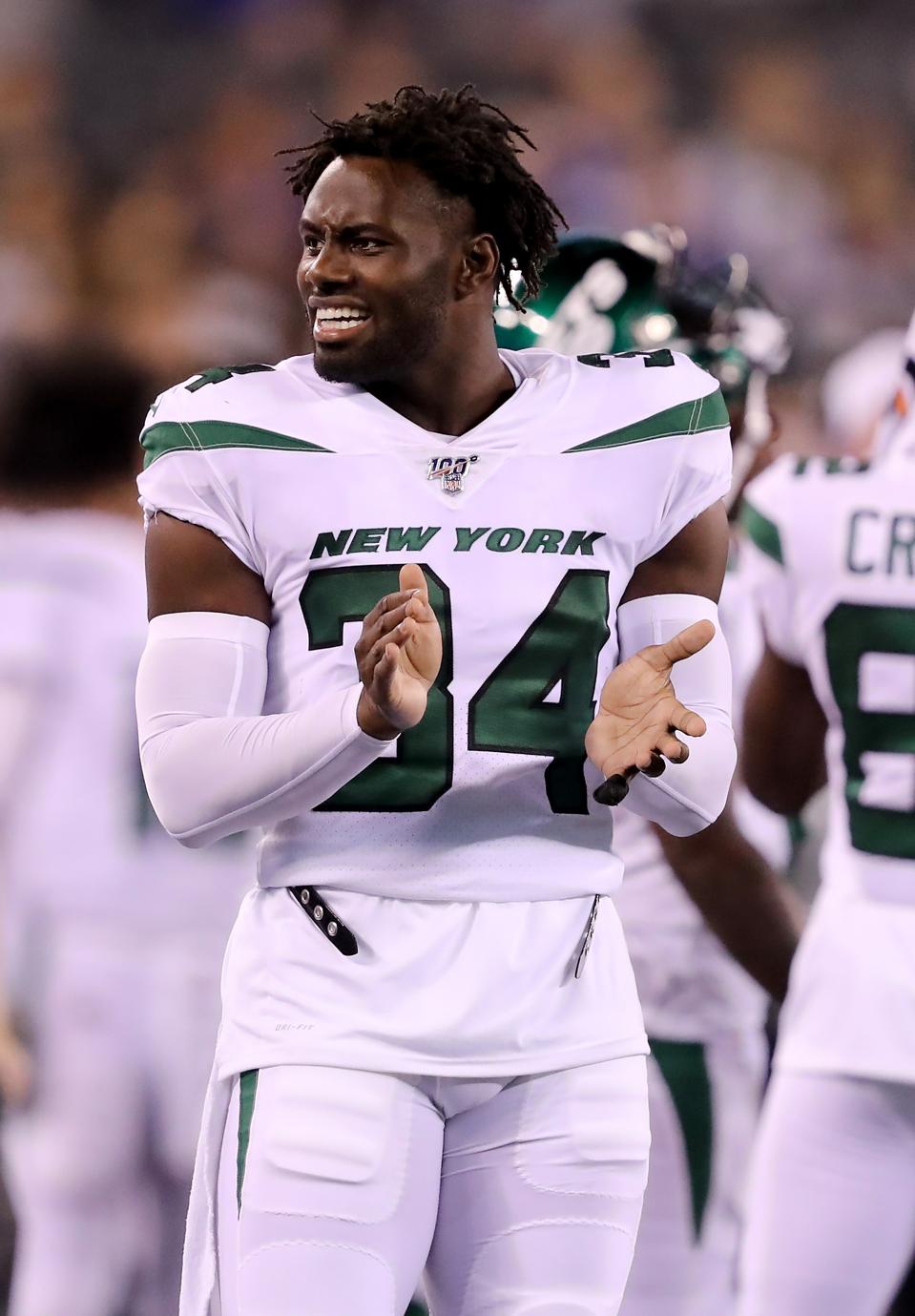 EAST RUTHERFORD, NEW JERSEY – AUGUST 08: Brian Poole #34 of the New York Jets reacts from the … [+] sideline during a preseason game against the New York Giants at MetLife Stadium on August 08, 2019 in East Rutherford, New Jersey. (Photo by Elsa/Getty Images)

My take: Douglas is spot-on. Poole certainly was a major upgrade over predecessor Buster Skrine. So why did he have to settle for a one-year contract for the second straight off-season? Well, the analytics folks apparently don’t love his play. NFL Next Gen Stats charged Poole with allowing a 91.1 passer rating when he was the closest defender. Still, with 90 percent of his one-year contract fully guaranteed, it would be a shock if Poole isn’t the slot corner, barring something unforeseen.

Douglas’ take: When you watch the tape, what jumps out about Pierre is how instinctive he is, especially in zone, and how good his ball skills are. When he has a chance to make a play on the ball, he’s going to get the interception or the (pass breakup).

Desir’s take: I think my ceiling is still very high, I’m going to continue to get better and learn from what happened. We mixed it up a little bit (in coverage) when I was in Indy. I’ve played press man before. I played it when I was n college. … I’m very comfortable playing press man. It’s something that I’ve done before.

My take: This is another risky prove-it deal, although if Desir can recapture his pre-injury form of 2018, it will be worth it. He played well enough that season for Indianapolis to reward him with a three-year contract, but he was cut in March to save cap space. The Jets signed him the next day.

He played mostly zone with the Colts, but Jets defensive coordinator Gregg Williams utilizes a lot of press man. As he said, Desir is confident he can thrive in press man. Time will tell.

Van Roten’s take: It’s the NFL. It doesn’t matter if it’s your first year or your 10th year, you need to be able to play well enough to prove you deserve that spot. I’m under no misconceptions that it’s my job to lose or anything like that. I know that I’ve got to prove myself as soon as I get there, whenever that is.

My take: Van Roten has the right attitude. Unless the Jets suddenly decide to release veteran right guard Brian Winters, the 2019 opening-day starter, it would seem Douglas and the Jets are setting up a competition between the two players. Van Roten started 27 games for the Panthers the past two seasons before being felled by an injured to for the last five games of the 2019 campaign.

Douglas has kept Winters in the fold despite the fact he could clear $7.281 million in cap space by cutting Winters. Douglas said of Winters, “We love his competitiveness and his toughness.” It’s clear he likes him as a player. There is a lot to like in that regard, but the fact remains that he missed the last seven games in 2019 when a painful shoulder injury became too much for even Winters to bear. This could be the most interesting Jets’ position battle.

Coffee With A Black Guy: This Social Entrepreneur Is Keeping His Community Talking, Despite Social Distancing

What Is Offsetting Improvements In Air Quality During...

Stuck In Decision Paralysis? How To Choose Between...

This Week In Credit Card News: Credit Gets...

Why Managers Holding People Accountable Is A Waste...