Breaking
France Off Travel Corridors And FCO Exempt List
Ask Ethan: Why Are The Moon And Sun...
When To See The Moon And The Planets...
IRS-CI Involved In Largest-Ever Seizure Of Terrorist Organizations’...
The Check Really Is In The Mail. After...
Epic Games Vs Apple: Why You Won’t Be...
Senator Kamala Harris Proposed A Bold Tax Credit...
Deal Terms To Reduce The Risk When Buying...
Multiple Sclerosis Drug Shows Promise For HIV Prevention...
The Neglected Piece Of Retirement Planning
It’s No Longer A Viable Option For Capitalism...
Virtual Credit Cards: An Extra Layer Of Protection...
Lessons From The Rainforest: Human Health Leads To...
Four Easy Ways To Bolster Your Company’s Reputation
It’s All About Claims: New Claims Come In...
Does Covid-19 Change How We Look At Digital...
Home Finance Anatomy Of A Bear Market Rally
Finance 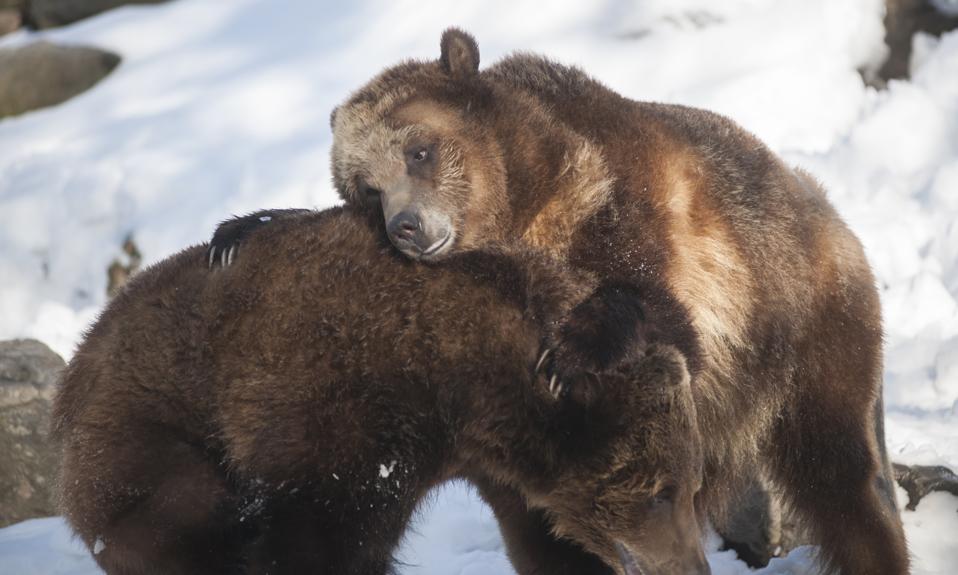 In my recent discussion of the 1987 market crash and past bear markets, I pointed out that sharp rebounds are always to be expected during bear markets. In particular, I focused on the six-day rally that took the S&P 500 up 19% from the lows, starting on October 28, 2008.

This first rally during the 2008 bear market generated a number of comments in the press at the time suggesting that the market was in the process of establishing a bottom. However, seven days after the rally, the S&P 500 was again making a new low (see chart). Following last week’s three-day rally, which was the sharpest rally since 1931, we started to hear the same thing from many market commentators. Given the historical patterns of bear markets, I’m not convinced. 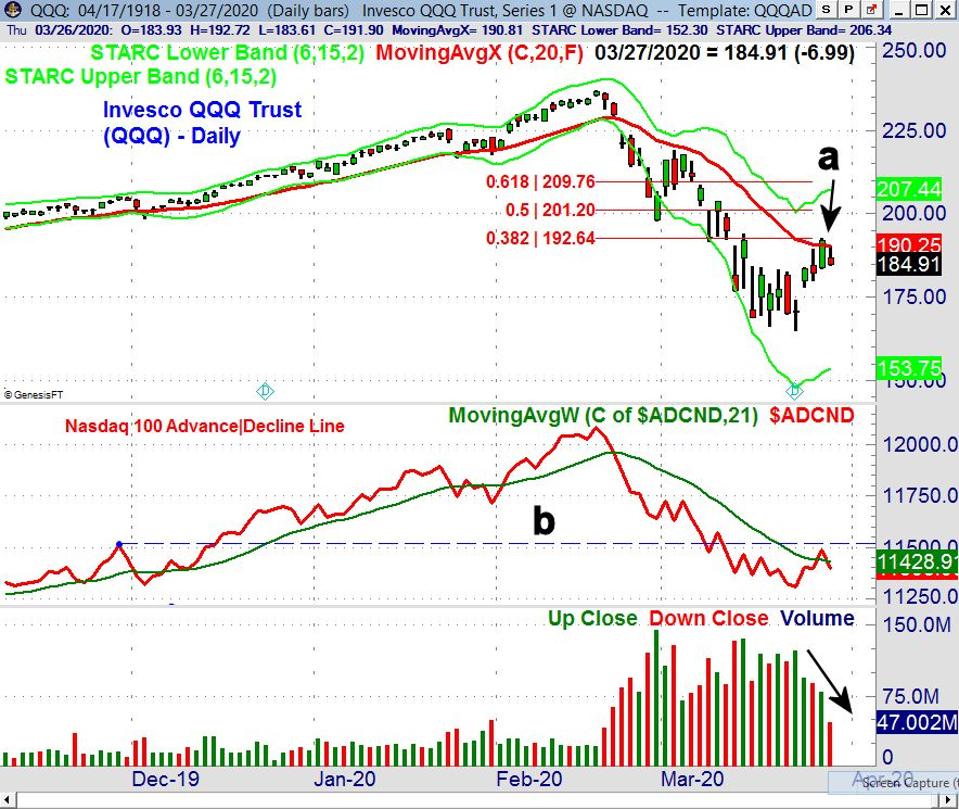 In understanding bear markets, one must be able to also acknowledge and navigate bear market rallies. At last Thursday’s high (point a), the Invesco QQQ Trust (QQQ) had a high of $192.72, which was just a few cents above the 38.2% Fibonacci retracement resistance at $192.64. The 20-day Exponential Moving Average (EMA) was also reached, and there is further resistance at $201.20.

The Nasdaq 100 Advance/Decline line closed above its Weighted Moved Average (WMA) on Thursday, but then reversed on Friday as QQQ closed down 3.4%. The A/D line has next resistance at a former support level (line b). This makes the A/D action early in the coming week more important. The volume declined as prices moved higher last week, and was also lower on Friday. Stronger volume on a further rally would be more positive.

So does that mean the rally is already over? Well, that appears to be the case, but it likely won’t be the last. It is important to understand that bear market rallies are a type of continuation pattern, a pause in the major trend. Throughout the bull market, there have been a number of bull market corrections that by earlier this year had conditioned many to “buy the dip”. As we enter a bear market, we will similarly see a number of bear market rallies. 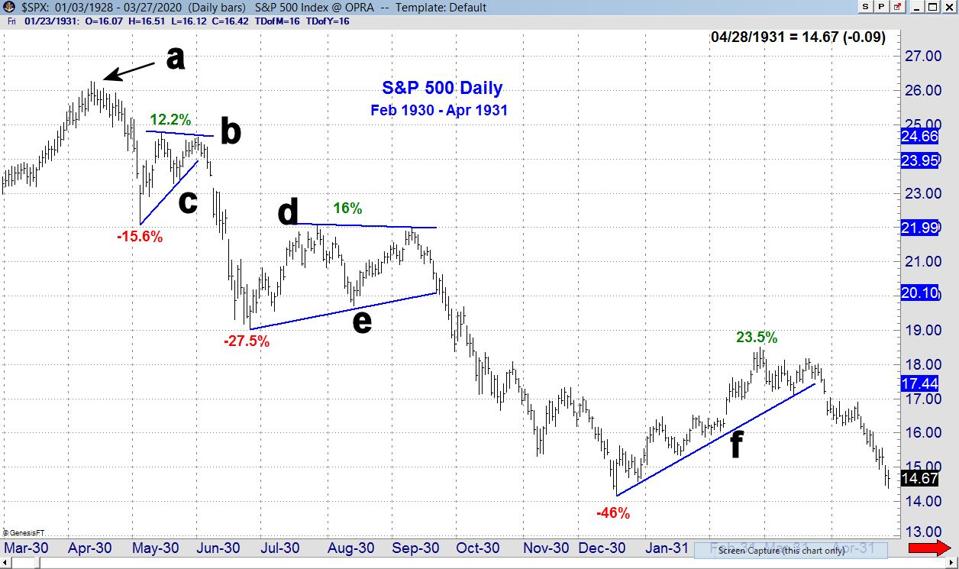 Most of last week’s headlines focused on the fact that it was the best three-day performance since 1931, referring to the 20% gain in the S&P 500 between October 6-8, 1931. However, these kind of comparisons mean nothing without context.

The initial wave of selling dropped the S&P 15.6% into early May, which was followed by a 12.6% rebound (lines b and c). This continuation pattern lasted just over four weeks before the sellers again took over. By the low in late June, the S&P 500 was down 27.5% from the April high.

The S&P then consolidated in what is another typical continuation pattern (lines d and e). It is important to understand that these pauses in the major trend often last long enough to convince a number of investors that the major trend may have changed. From the June low to the rebound high in July, the S&P 500 had gained 16%.

In late September, the support (line e) was broken, which was an indication that the major downtrend had resumed. By December 17, the S&P 500 was down 46% from the April high, and the market was overdue for a rebound. 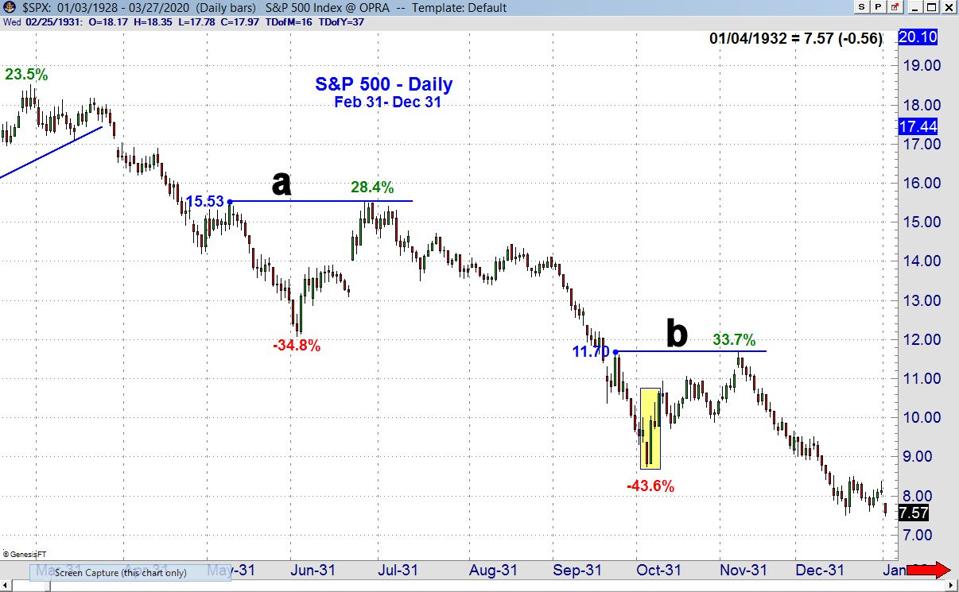 The slide from the February 1931 high finally stopped in early June. The S&P 500 declined 34.8% from February’s high to June’s low, and the sharp two-day rally from the lows suggested the worst of the selling might be over. The resulting four-week rally resulted in a gain of 28.4% from the lows, stalling out in late June barely below the May high of 15.53 (line a).

The rebound was not over yet. After a 10% pullback, the S&P continued higher, and by the November high at 11.70 (line b), it was up 33.7% from the October low. This rally had three rally peaks, a feature which is often seen in both bull and bear market rallies.

I am not suggesting that the current market decline will be anything like the depression-era market. However, the 1930-31 bear market period illustrates a few lessons for those grappling with today’s market. First, it shows that after a severe break, there are likely to be rebounds. Secondly, it shows that it is likely too early to look for a significant change in trend. From my perspective, this will continue to be true at least until the rate of infection for COVID-19 begins to subside. 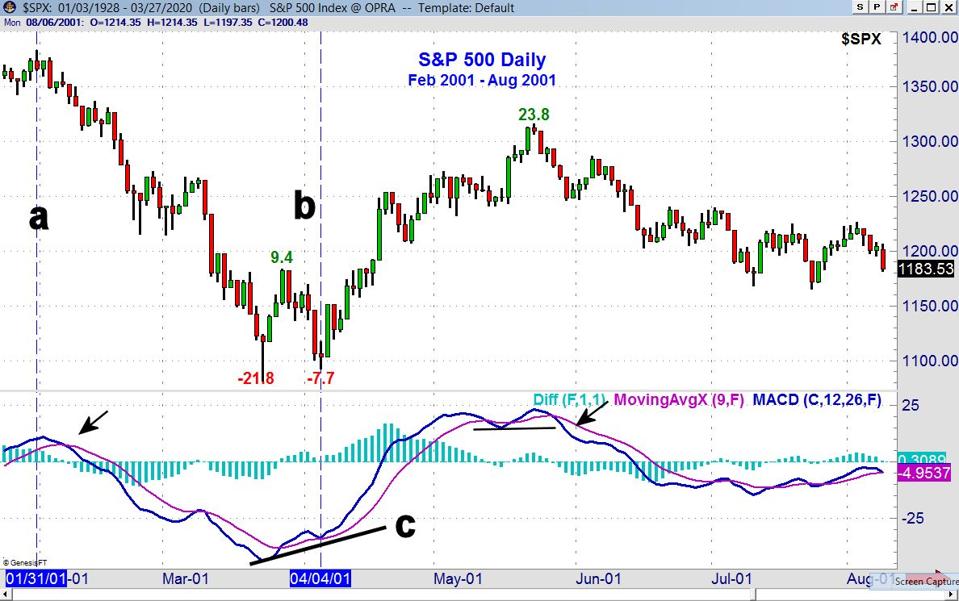 Often times, if you see a strong rebound after a severe decline, you do get a drop back to the prior lows or lower before you see a larger bear market rally. That was also the case in the 2000-01 bear market. From the January 2001 rebound high at 1381 (line a) the bear market resumed. By the intra-day low of 1081 on March 22, the S&P had dropped 21.8% from the September peak (not shown).

After a three-day rally brought the S&P 500 up 9.7% from the low, the market turned lower and declined to a new closing low of 1103 on April 4 (line b). The Moving Average Convergence Divergence (MACD) Histogram stayed positive on the decline, which was a positive sign as were the higher lows in the MACD signal lines (line c). The S&P 500 made lower closing lows, so this was a bullish divergence. The S&P 500 rallied 23.8% from the April low and peaked on May 22 at 1315.

The MACD Histogram turned negative three days after the highs. A few days later, the decline below support in the MACD and its signal lines (see arrow) indicated that the rebound was likely over. The September 21, 2001 low of 969 (not shown) was a decline of 30% from the May high.

So what’s next? I am always hopeful that the weekend news will be encouraging. That being said, I would not recommend buying until there are signs that the pullback from the Thursday high is over. For those who are looking for a rally to reduce their equity exposure, I think a stronger rebound is likely before the summer. I will be taking a further look at bear market rallies next week.

In my Viper ETF Report and the Viper Hot Stocks Report, I update subscribers with my market analysis at least twice a week, and more often when the markets are volatile. I give specific advice on the long and short side of the market, and I will be watching any market rebound closely.

Five Strange Things You Need To Know About Uranus

THE AUTOMAT: THE MOST CULTURALLY RELEVANT FILM FOR POST-PANDEMIC AMERICA