Corals washed ashore in the Cayman Islands some 5,500 years ago due to catastrophic storm events. These ancient species are alive today and offer important evidence of the longevity of modern reef systems. Thousands of years ago, when sea levels rose above the edge of the Cayman Islands, shallow reef crests developed and Island lagoons formed with millions of calcifying plants and animals (composed of calcium carbonate, which is what limestone is made of) continuously fragmenting into sand particles for beaches— a natural carbonate factory. Today, scientists are reporting net negative calcification in certain regions. More sand is eroding than being deposited, more corals are dying than recruiting— scientists are grappling with the unthinkable scenario of coral reef extinction by 2050. But scientists at the Cayman Islands’ Central Caribbean Marine Institute, based in Little Cayman, are studying the unique characteristics of resilient 5,500 year-old corals to create new and better models for predicting and safeguarding against climate change impacts.

I caught up with Dr. Carrie Manfrino, CEO of the Central Caribbean Marine Institute (CCMI) in Little Cayman to find out more about the work being done. 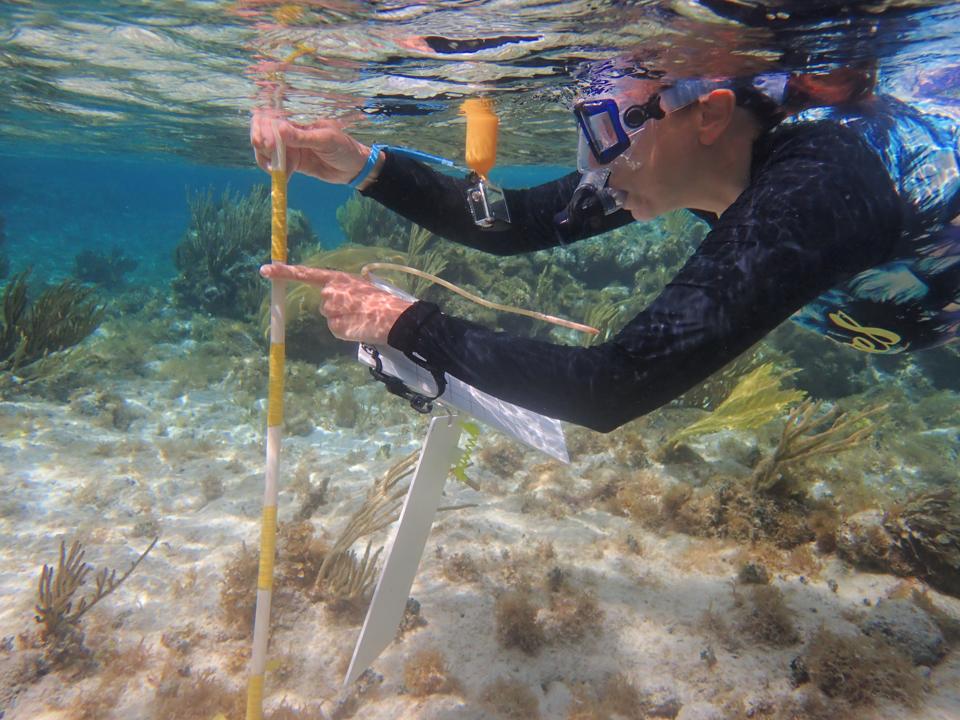 A scientist from the Central Caribbean Marine Institute studying coral off of Little Cayman.

Daphne Ewing-Chow: How do the reefs in the Cayman Islands compare to the rest of the Caribbean region?

Dr. Carrie Manfrino: The reefs in the Cayman Islands are among the healthiest in the region. This is due to historically low human population and development, respect for the environment, and the lack of commercial fishing.

Daphne Ewing-Chow: What is being done in the Cayman Islands to prevent the unthinkable eventuality of coral reef extinction?

Dr. Carrie Manfrino: Cayman Islands’ reefs are among the most protected in the Caribbean and have been for almost 30 years. Earlier this year, the Cayman Islands government increased marine protected areas around the islands to nearly 50%. Little Cayman has become a hotbed of research to unlock the secrets of coral resilience. In fact, all of our research at the Central Caribbean Marine Institute (which is based on the study of Little Cayman’s reefs) is focused on the theme, reef resilience and restoration— R3. As the CEO of this organization and as a scientist, the only solution that I see is innovation. We are investing in the possibility that we can speed up adaptations, assist evolution, and establish new reef habitats that can become biodiversity hotspots. We are collaborating with some of the brightest minds in the field to try and find solutions.

Daphne Ewing-Chow: What is the biggest threat to corals?

Dr. Carrie Manfrino: Corals are symbiotic animals with a skeleton of calcium carbonate and tiny polyps living in small little compartments called corallites or tiny, single celled algae living in a mutually beneficial arrangement inside the polyps. When temperatures in the ocean heat up, the algae become toxic to corals and are essentially expelled. The corals turn white or ‘bleach’. This seems to be a very poor adaptive strategy because the algae provide corals with up to 99% of their energy. As long as temperatures cool off quickly (within weeks), the algae move back in to the coral polyps, colors come back and the corals are revived.  Scientists are reckoning with the speed at which ocean temperatures are rising, which is leaving little time for the corals to recover or adapt. The long-term trend of climate change will result in large shifts in coral reef communities; there will be winners and losers.

Daphne Ewing-Chow: Can the reefs survive the unthinkable?

Dr. Carrie Manfrino: At the Central Caribbean Marine Institute, we have multiple ongoing experiments to evaluate the capacity for corals to survive current stress. We are able to grow corals that are resisting bleaching by acclimatizing them to our warmer lagoons for example; but without major change in human activity, coral reefs as we know them will be remarkably different by 2050. Areas with the highest numbers of herbivorous fish have the greatest potential for survival. Locations that adopt the strictest controls on coastal development to protect the shoreline and manage sewage and pollution will have the greatest potential for coral reef survival. The reality is, some corals are unlikely to survive but other species are resilient and will adapt in time.

Daphne Ewing-Chow: Can reefs recover from episodic events that lead to bleaching and mass mortality?

Dr. Carrie Manfrino: Yes. In 2013, we published a paper in PlosOne with a very large database showing a positive trajectory for the reefs in Little Cayman (Manfrino et al, 2013). We are not certain about the factors leading to this positive trajectory but we inferred that low human impact and an abundance of herbivorous fish to keep fleshy algae at bay whilst corals were recovering has helped.  We also suspect that weaker corals died and more robust corals survived, and therefore, regenerated a healthier stock. We are going to be testing this theory in the coming year. Evolutionarily speaking, we know that certain traits in all species are inherited. The question is, what traits do we need to select for so that corals can adapt to changing ocean conditions?

Dr. Carrie Manfrino: We are working on this. We established the Little Cayman Research Centre in 2005 because the location provides an exceptional site for coral reef research with few confounding man-made issues. The seawater around Little Cayman has proven to be an incredible natural laboratory.  We are also pumping seawater directly into our laboratories for climate-controlled experiments. Our scientists have grown thousands of corals from 5 original fragments, and with these corals we have established three coral nurseries at different depths and for different experiments. We have conducted experiments simulating climate change at year 2100 to assess how higher levels of carbon dioxide will impact different organisms. In these experiments we found that both corals and calcifying algae will survive if temperatures are maintained. We can use this information to identify the best locations for regenerating corals. We have found that we can engineer corals that are ‘stronger’ to physical stress and accelerate their growth so that we get seven years of growth in one, which is measured in liner extension. We have also been able to grow corals that are resilient.  Resilience is the ability of a species to rebound from stress.  Right now, we have a population of 1,000 corals in a deep (50ft) nursery setting that was infected by a disease that within 4 months impacted >70% of the population. Surprisingly, the corals are now recovering. The population that recovers will become our next generation of corals that we fragment and use to repopulate the reefs.

Daphne Ewing-Chow: Are there possible refuges?

Dr. Carrie Manfrino: Our scientists are discovering that deep corals are more ‘plastic’ than shallow corals so we are beginning new experiments to increase the potential for adaptation of shallow corals to deeper sites. The hypothesis is that deeper, mesophotic reef zones will be a potential refuge. The real answer is, we are still unlocking the secrets to these complex and ancient ecosystems. And the bottom line is when you have been quietly growing for over 5000 years, recovery and adaption will also take time and patience.  Unfortunately, we are out of time. We are urgently trying to use our results to inform how the process can be scaled up successfully.

This summer we established  a Vision 2025 for the Central  Caribbean Marine Institute to help lead the effort to save coral reefs by demonstrating how to successfully grow and regenerate  resilient corals  in the wild.

Mesut Ozil Shows Emery And Arsenal What They Have Been Missing In Astonishing Cup Game Vs. Liverpool

How to dress your home office walls

What Happens When You Sell Your Company During...

How does a secured business loan work?

What happens if you are struck by a...

6 career benefits of experiential learning + how...

Want to get your own business, finance, technology and marketing news and views in front of thousands of regular readers? View our media pack or contact us.