With a leaked launch date of February 18 next year, the specs and design of the Galaxy S11 are likely locked in – certainly major elements like the battery will be fixed. And it looks like Samsung is going to pack in a lot of power. Forbes’ Gordon Kelly reports:

“Picked up by the eagle eyes of SamMobile and popular Samsung insider Ice Universe, Samsung has made the battery sizes of the Galaxy S11 and Galaxy S11+ publicly available through the submission of these parts for certification at government testing agency SafetyKorea. And its reveals Samsung has stepped up its game. 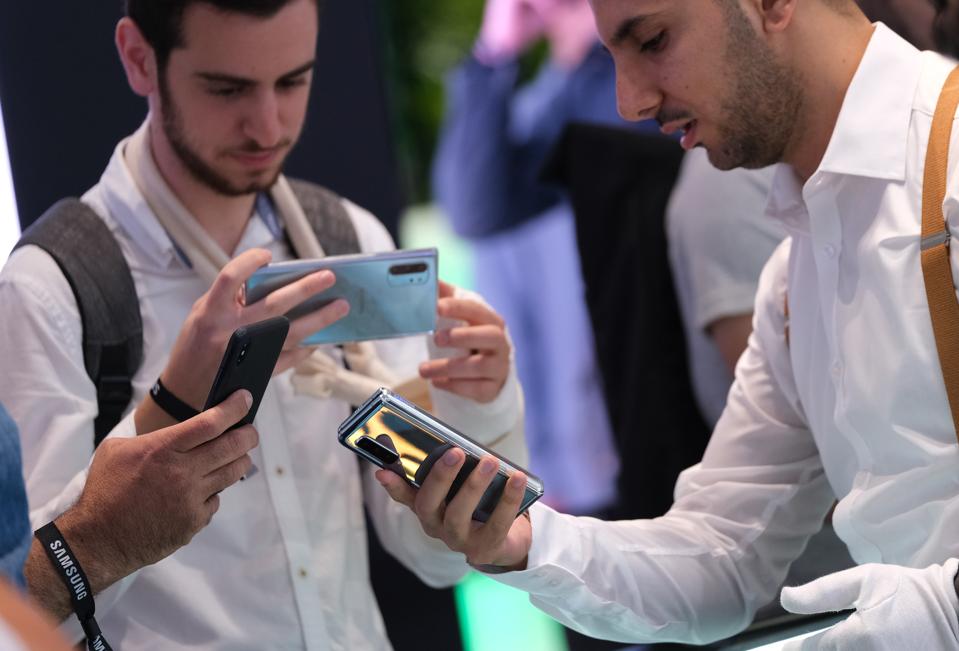 BERLIN, GERMANY – SEPTEMBER 05: Visitors have a look at the new Samsung Galaxy Fold smartphone at … [+] the 2019 IFA home electronics and appliances trade fair on September 05, 2019 in Berlin, Germany. The 2019 IFA fair will be open to the public from September 6-11. (Photo by Sean Gallup/Getty Images)

The Success Of The Galaxy Fold

Meanwhile Samsung’s radical folding smartphone – the titular Galaxy Fold – has been quietly picking up sales around the world. Samsung’ president took to the stage at TechCrunch Disrupt and announced the bleeding edge handset has racked up one million sales. Dan Seifert has more:

“Samsung’s first folding phone may have been fraught with a stumbled launch, reliability woes, and a nearly $2,000 price tag, but that hasn’t stopped the company from finding a million people to buy the Galaxy Fold, according to Samsung Electronic’s president Young Sohn.

The story is at The Verge and has been picked up by many news outlets, but a Samsung spokesperson has highlighted some potential confusion, with the one million figure being the sales target.

“But a Samsung spokesman said Sohn may have confused the figure with the company’s initial sales target for the year, emphasizing that sales of the tech firm’s first foldable handset have not reached 1 million units.

“Earlier, Samsung said it expected to sell 500,000 Galaxy Fold globally this year. Many analysts previously expected that Samsung would sell about 400,000 to 500,000 units of the foldable phone this year.”

More from the Yonhap News Agency.

A New Location For Your Selfie Camera

One of the design trends in the last few years has been how to deal with the selfie camera in a world of ‘all glass’ displays. The common approach is to have a notch in the display, while others have turned to pop-up cameras. But the real goal is a camera under the screen that is effectively invisible. Oppo has showcased just such an invention at the recent Innovation Day in Shenzhen. David Imel reports:

“The technology uses an ultra-thin transparent material and a new pixel structure sitting above the camera, which allows light to pass through the glass and into the lens when not in use. Oppo says a wider aperture and sensor are needed to capture enough light after being filtered through the layer. As bigger and higher-resolution sensors become more popular, this shouldn’t be a problem for long. During my time with the prototype, the selfie quality looked great.

“With the wrong color wallpaper at the wrong angle, it’s definitely possible to see the camera housing, which is currently taking a strange square shape. In most conditions though, the cutout is almost completely hidden, and frankly, that’s amazing.”

Following the rollout of Android 10 to the Nokia 9 PureView and Nokia 8.1, HMD Global has taken the next step in its public schedule and brought the Nokia 7.1 (reviewed here) up to date. Pranob Mehrotra reports:

“According to a recent tweet from HMD Global’s Chief Product Officer Juho Sarvikas, the Android 10 update is now rolling out to Nokia 7.1 users around the world. The update brings all the new features introduced with Android 10, including gesture navigations, smart reply, privacy controls, focus mode, and family link. It’s worth noting that the Nokia 7.1 was launched with a promise of three years’ worth of monthly security updates and two years of OS upgrades. Android 10 is the Nokia 7.1’s second OS update and the device will receive no further OS updates from the company.” 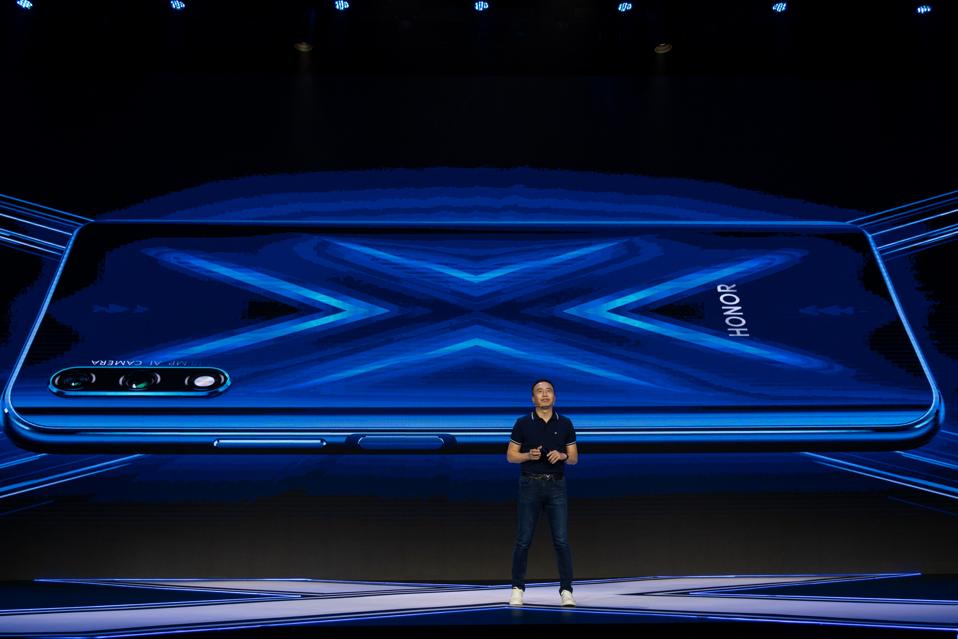 Honor Looks At Your Picture Power

To highlight the selfie camera in new handsets such as the Honor 9X, the team at Honor have taken a closer look at the impact of the forward-facing camera, the power of the selfie as self expression, and the time it takes both for assessing the picture and deciding whether to post it:

“Across the UK, nearly half (45%) of the photos Brits take on their smartphones are shared with friends and family on social media, revealing our nationwide tendency to share moments from our daily life with others. But even though it takes Brits just 10 seconds to decide if a selfie makes the cut, we spend a further 25 minutes deliberating before it’s shared on social media, suggesting that as a nation, we’re making conscious decisions about how we’re representing ourselves online.”

More details are at Honor’s blog.

Fortnite’s revenue stream is not in the downloading or installing the game, but in the micro-transations inside the game. This week saw publisher Epic Games approach the Google Play Store to list the game (which can currently be sideloaded), but the code submitted did not use the Play Store transaction engine, and therefore bypassed Google’s charge of thirty percent per transaction. Abner Li covers Epic’s approach:

CEO Tim Sweeney lays out a case against the ‘tying of a mandatory payment service.’ “Epic doesn’t seek a special exception for ourselves; rather we expect to see a general change to smartphone industry practices in this regard.

“We have asked that Google not enforce its publicly stated expectation that products distributed through Google Play use Google’s payment service for in-app purchase. We believe this form of tying of a mandatory payment service with a 30% fee is illegal in the case of a distribution platform with over 50% market share.”

More on the bid at 9to5Google. Unsurprisingly Google rejected Epic’s argument within 48 hours, citing the reinvestment of income from the Play Store back into the Android platform as a whole. The Verge’s Nick Statt:

“In a statement to The Verge, Google says the Android platform is dependent on the existing Play Store terms because that is how the company is able to reinvest in its platform to help it grow and to provide ample security measures.

“Android enables multiple app stores and choices for developers to distribute apps. Google Play has a business model and billing policy that allow us to invest in our platform and tools to help developers build successful businesses while keeping users safe,” a Google spokesperson tells The Verge. “We welcome any developer that recognizes the value of Google Play and expect them to participate under the same terms as other developers.”

Given Epic has been pretty vocal about the Play Store (and the Apple Store) acting as monopolies and the thirty percent rake on sales and in-app purchases, I don’t expect this to be the end of this chapter.

This week saw Microsoft officially discontinue support for Windows Mobile 10. Although there will be no more updates from Microsoft, your handset will not stop working… but there will be a ‘death by a thousand cuts’ as support is lost from first- and third-party apps and services. Steve Litchfield has more:

“One good question is what will happen to all of these phones after December 2019, when the last Windows 10 Mobile branch leaves support? See my Windows 10 Mobile Service and App ready reference table for the constantly updated state-of-play. ‘Death of a thousand cuts’ seems appropriate in terms of hanging on for too long though, since we seem to lose a major service’s compatibility every few months (Facebook, Whatsapp, etc.) Especially when other platforms are gaining compatibility and functionality.”

Stepping back slightly, the loss of Windows Mobile 10 (and Windows Phone) leaves the smartphone world a little more ‘samey’. The ideas around data handing and UI are still ahead of their time, but Microsoft did to play it’s hardware hand well. Richard Speed has the eulogy over at The Register:

“In comparison to the iPhone, the Windows Phone was a delight. It synced to Zune over Wi-Fi and, aside from some annoying missing functions, it seemed Microsoft was on to a winner with an innovative interface design, even if it might not have been to everyone’s taste.

“Ominously, it was also not compatible with previous versions of Windows Mobile, was missing some key user and enterprise features and as time (and versions) moved on, Microsoft appeared dead set on irritating as many app developers as possible as the goalposts for developing for the platform appeared to dance with every revision.”

As for Microsoft’s current place in the mobile space, the efforts to provide a layer of cloud services and a consistent UI continue, with efforts to push its Fluent design to other developers:

“Today, Microsoft is reviving some of these ambitions by bringing what it calls its Fluent Design system to its mobile Office apps, a simplified set of principles designed, just like Windows Phone, to speed things up on the go. It’s even letting third-party app developers embrace these design elements with toolkits to prettify their own apps. This will have the benefit of making Microsoft’s mobile apps feel more consistent, but the end goal is the same as Windows Phone’s was: to get users in and out of their apps quicker and back to life again”

More on that at The Verge.

World’s ‘Weirdest’ Sharks And Rays On The EDGE...