As much as 96 percent of personal movement in the world’s major cities vanished as mayors imposed lockdowns this month to slow the spread of COVID-19, according to data from Citymapper, an urban mobility app.

Citymapper serves users in 41 metropolitan areas in Europe, the Americas and Asia. It recently unveiled the Citymapper Mobility Index to document the drop in trips planned on its app.

“We have enough data in our cities where we publish CMI to be confident that it represents a real change,” the company reports.

Italy had already entered lockdown when Citymapper began publishing its index, so the index captures other European capitals following suit. It also captures three cities in the United Kingdom lagging behind.

When the index first came out, it made news in England for documenting that Londonders were ignoring advice to reduce travel. Now it shows them making a concerted, though tardy, effort to comply: 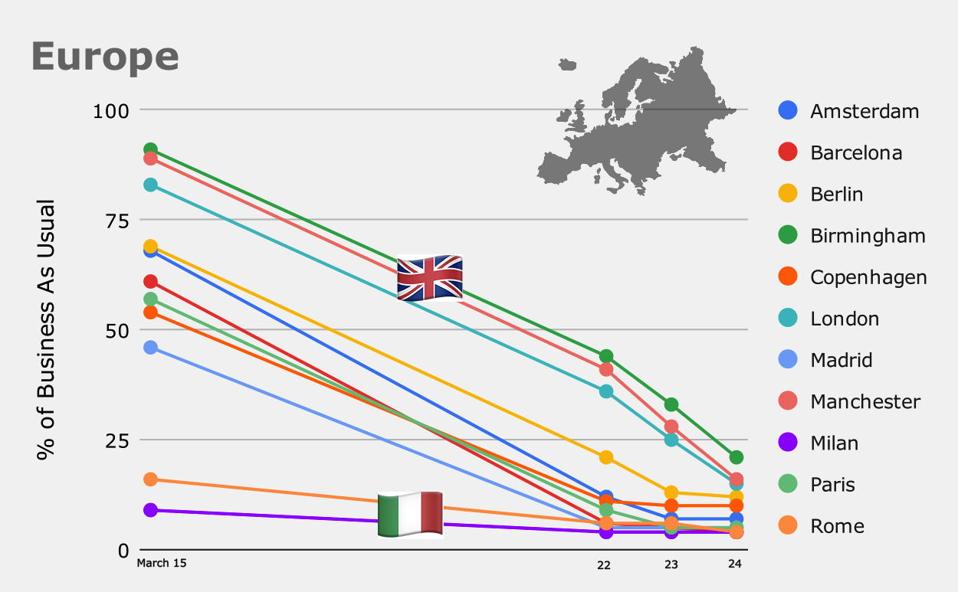 Citymapper data captures the rush of European cities to inhibit the movement of their citizens—and … [+] the spread of COVID-19. Italy had already entered lockdown before Citymapper began indexing data. Britain is shown striving to catch up after a slower initial response to the pandemic.

In Barcelona, Milan, and Rome, Citymapper users are planning only 4 percent as many trips as they were before the pandemic. 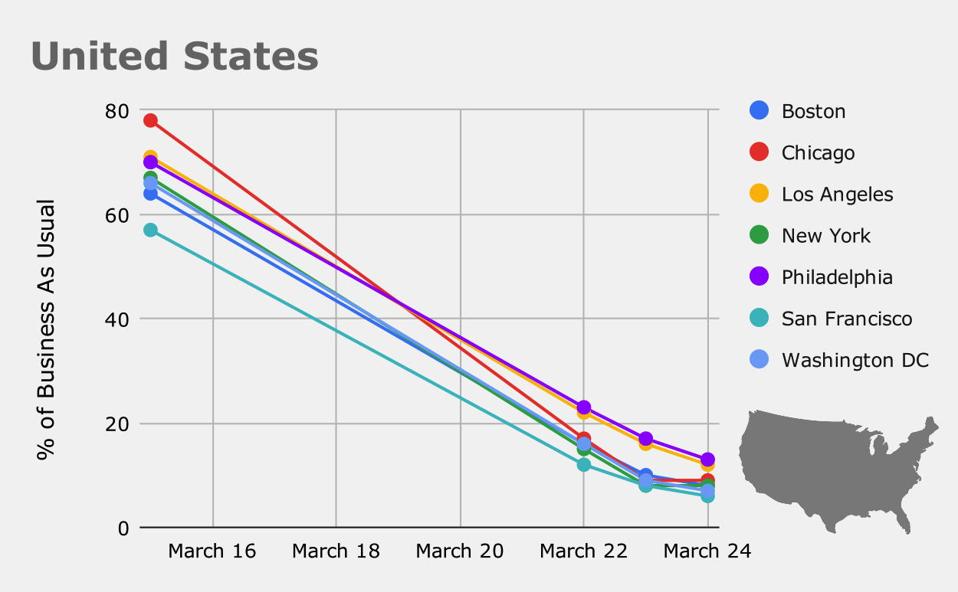 The plunge in movement of residents of seven major U.S. cities, according to data from Citymapper.

San Francisco leads American cities at 6 percent of its prior mobility. Philadelphia is furthest behind at 13 percent.

The United States may trail some cities in Europe, but it’s well ahead of its neighboring states: 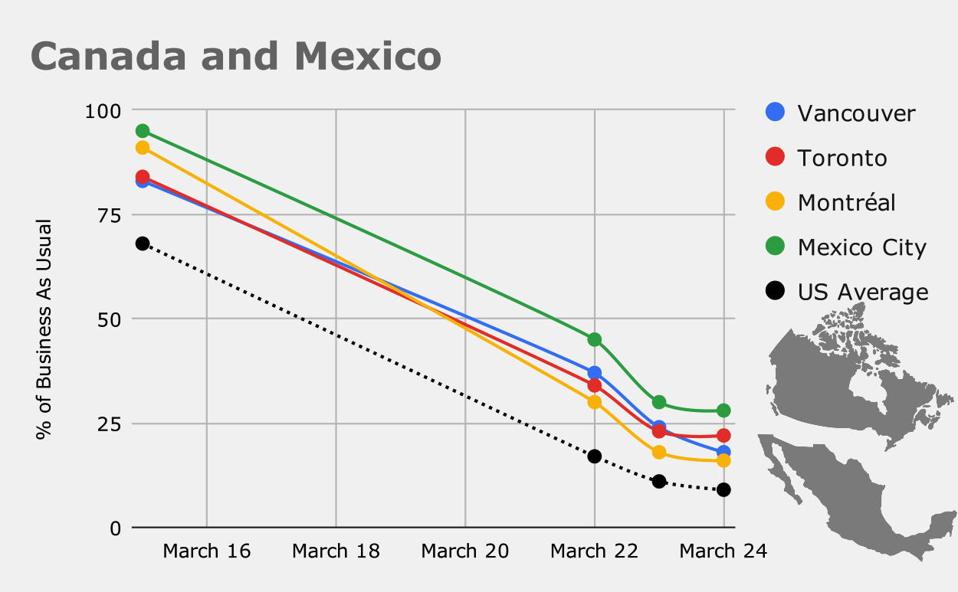 Canada and Mexico are beginning to restrict travel, but remain well behind major metropolitan areas … [+] in the U.S.

The data in these charts depict weekly averages for the weeks ending March 15 and March 22 (so daily variations do not appear), but culminate in daily figures for March 23 and 24. Last night the company added day-by-day data for individual cities: 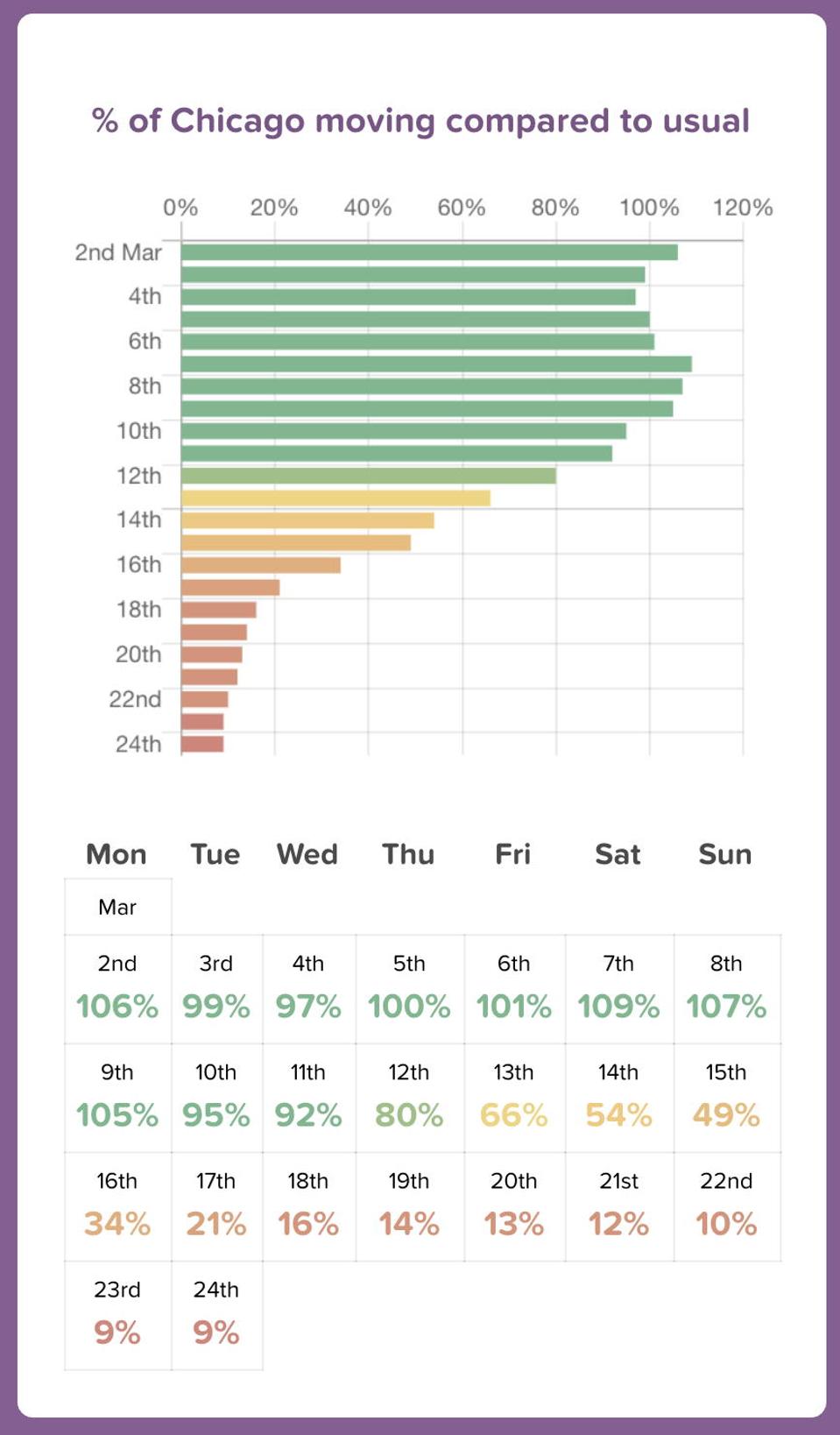 Citymapper helps its users optimize routes for public transit, biking, walking, and rideshare services, including Uber and Lyft. It does not document personal automobile use.

“Our users are public transport users and also use us for walking, cycles, and some micro-mobility and cabs,” said an anonymous respondent to a press inquiry I sent to Citymapper. “We do not support personal car navigation.”

But pictorial evidence from satellites and the ground suggests automobile traffic is following a similar course, and with it, air  pollution is dropping significantly. 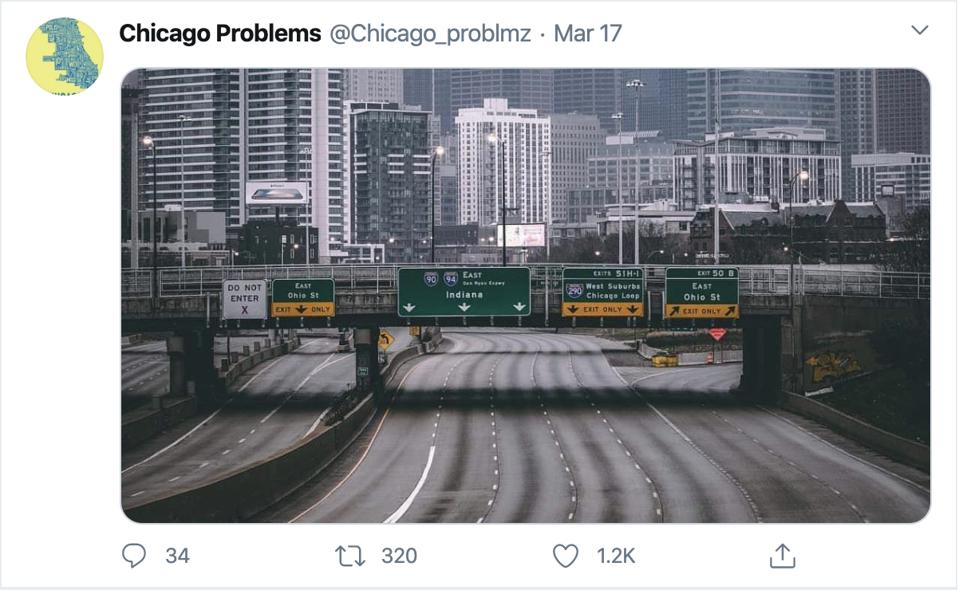 Traffic into Chicago’s Loop has vanished during the COVD-19 coronavirus lackdown.

The Citymapper index for Asian cities appears less dramatic because many were restricting travel before Citymapper began tracking the changes. Some are now returning to normal. In Citymapper’s data yesterday, most Asian cities were between 20 and 50 percent of normal.

But the index offers insight into more opaque locales like Russia, which claims to have relatively few cases, but where Vladimir Putin nonetheless goes about in a hazmat suit. 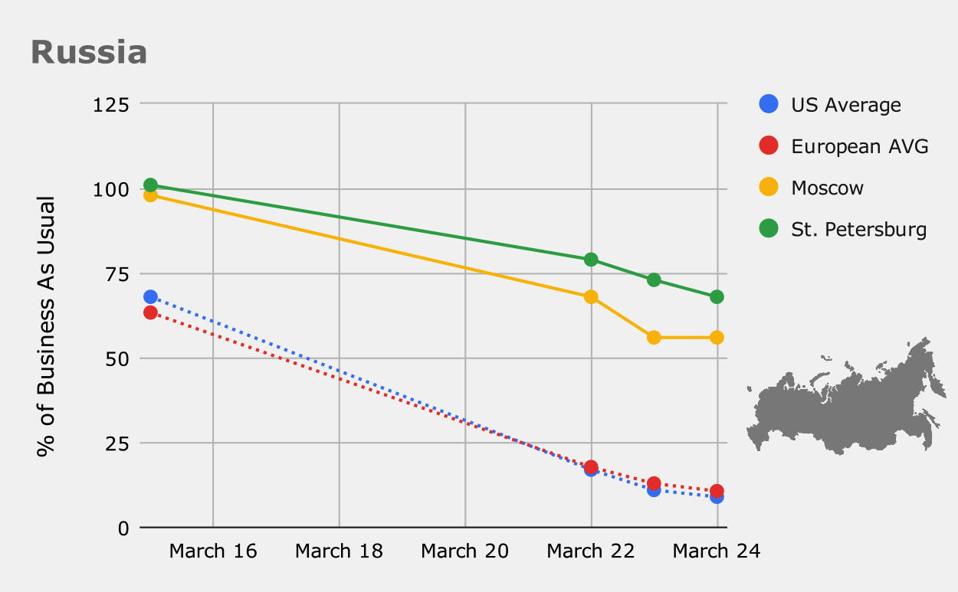 Residents of Moscow and St. Petersburg have only recently and only partially restricted their … [+] movements in response to COVD-19, the novel coronavirus. The U.S. and European averages are presented for comparison.

How China’s Measures Have Worked Against Coronavirus, What 2 Studies Showed

The Best Theater Of 2019: Broadway And Beyond

Eyewear Retail Is Nearing An Extinction Event And...