Breaking
What You And Your RTO Business Need To...
4 SEO Trends for Websites You Should Not...
3 Reasons Why Desk Booking Is Rising In...
8 Tips to Play & Win at Online...
How can software benefit facility management?
Do Professional Casino Players Pay Taxes for the...
Becoming a Trading Expert: What Is the Best...
Dos and Don’ts for B2B Organisations in 2022
Should your business be using Machine Vision?
Colour Masterbatch vs Raw Pigments – Which Is...
Keeping your business moving as you expand online
Top Four Celebrities Who’ve Invested In Cryptocurrency
Why is Cloud Computing Tipped to be the...
How to Raise Money for Non-profit Organizations in...
Choosing the right theme for your WordPress Business...
A Guide to Using Celebrities to Promote Your...
Home Technology Apple Loop: Shock iPhone Delayed, Apple Fights AirPods, Radical MacBook Pro Feature Leaks
Technology

Taking a look back at another week of news and headlines from Cupertino, this week’s Apple Loop includes the iPhone 12, AirDrop speeds up, a new name for the iPhone 9, a helping ARM for the MacBook Pro, a curious keyboard for the iPad Pro, Apple challenges the AirPods, and where are the Mac Pro’s brakes?

Speeding Up The iPhone 12

5G will speed up the iPhone in September when the presumptively-named iPhone 12 will be launched. But that’s not the only speed improvement, with news this week that Apple is working on the inclusion of the 802.11ay standard for very fast close range communication. Why is this important?

The ‘ay’ standard allows for data transfers at close range between 20Gbps and 30 Gbps. If the iPhone hardware does go down this route, it will be one of the first smartphone manufacturers to do so. The key benefit of the technology is an increase in data transfer rates at very short range. Right now that could mean a significant uptick in speed for iPhone 12 to iPhone 12 files transferred using AirDrop.

But Will The iPhone 12 Be Delayed?

Even with speedy hardware, will 2020’s iPhones be delayed? Although the launch is not until September, the early models for testing both the production lines and the hardware itself need to be worked on just now. With the coronavirus shutting down factories, the timetables for the iPhone 9 and the iPhone 12 are looking weaker. Forbes’ Gordon Kelly reports:

Reuters also cites a second insider who states that Apple’s transition process from iPhone prototype to the assembly of millions of units “starts in earnest” between late January and early February and by which time Apple has normally tested multiple prototypes as it finalizes a process called engineering validation. And this has to happen early “because of the huge volumes needed” for chips and other parts, which Reuters says are almost all custom-made. 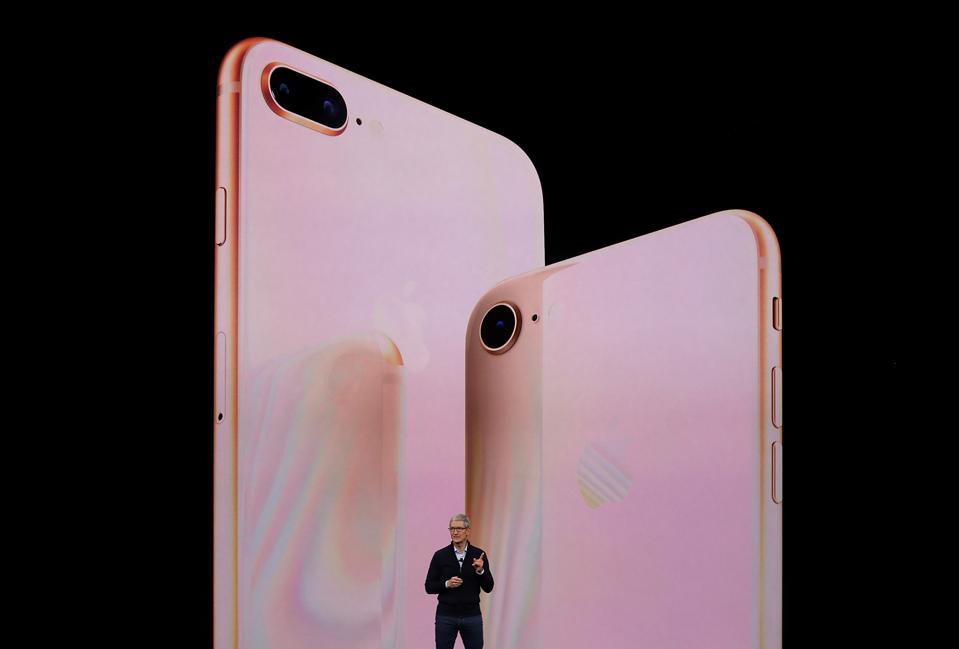 CUPERTINO, CA – SEPTEMBER 12: Apple CEO Tim Cook speaks during an Apple special event at the Steve … [+] Jobs Theatre on the Apple Park campus on September 12, 2017 in Cupertino, California. Apple is holding their first special event at the new Apple Park campus where they are expected to unveil a new iPhone. (Photo by Justin Sullivan/Getty Images)

iPhone 9? iPhone SE2? Or Something Else?

With so many iPhones on the books, and customers looking towards ‘higher numbers better, lower numbers worse’, going with ‘iPhone 9’ makes sense if you are comfortable noting the similarity to the iPhone 8, but does it sell? Is it marketable? Or is there a better choice. Leaks from noted sources suggest there is. Joshua Single reports:

Apple is instead reportedly planning to market the smartphone as ‘iPhone.’ Yes – no numbers or anything – simply iPhone, much like the strategy already used by the Cupertino giant with the entry-level iPad.

This strategy would avoid customers thinking the smartphone is inferior or much older than the iPhone XR and iPhone 11. It also paves the way for a future iPhone lineup without numbers, perhaps where the iPhone 12 is marketed as the iPhone Air and the iPhone 12 Pro is known as the iPhone Pro.

Will Mac Pick Up A New ARM?

The expectation that Apple will switch its Mac computers away from Intel to its own ARM-based design has been around for some time – it would come as no surprise to me that Cupertino has a few prototypes somewhere under lock and key – but is Apple starting to build up to a public release? Nick Statt reports on the latest leak that promises just that:

Apple may release its very first ARM-based laptop without an Intel processor as soon as next year, according to reputable KGI Securities analyst Ming-Chi Kuo (via 9to5Mac). Kuo, who often correctly predicts Apple trends before they take shape, says the new Mac is coming sometime in the next 12 to 18 months and will feature an in-house processor not developed by Intel.

More at The Verge. That said there are a lot of issues with an ARM-based Mac that would need to be overcome, not least a code break for developers in the transition between Intel and ARM, as I discussed earlier this week:

If this is going to happen, the first sign will be at Apple’s Worldwide Developer’s Conference in June. Expect the plans to bring ARM to the Mac family to feature heavily (possibly pushing the connection between the ARM-based iPhones and iPads to a future ARM-based Mac).

Read more on the challenges here.

A New Keyboard For The iPad

Although Apple’s iPad Smart Cover has been out for some time, the next step in Apple’s plan to make the iPad more ‘laptop like’. Plans for an improved keyboard with a touchpad alongside an updated iPad Pro. Both are expected to be launched later this year. Jason Snell has some questions, including what a trackpad would actually drive:

The current way to drive a cursor via an external pointing device is by turning on Assistive Touch within Accessibility settings. The Assistive Touch cursor is a virtual finger that works, but feels severely lacking compared to Mac pointers. Unless Apple’s been hiding a major iPadOS update that makes cursor support vastly better, it’s hard to imagine Apple trying to sell people on an accessory that requires turning on an accessibility feature that’s not really up to its own standards.

More thoughts on the matter at Six Colors.

Apple Creates Some Competition For The AirPods

AirPods have done very well for Apple – even though I personally think that adding ‘headphones’ into ‘wearables’ is using a rather wide definition given precedent. They were, naturally, beaten by the AirPods Pro, but what options do Apple users have if they want more than open buds? How about the ‘Apple Inc. Wireless Headset A2015’ found in a recent FCC listing? Have the Powerbeats 4 been confirmed? David Phelan reports:

If you take a look at the icon found in the iOS software you can see that there’s a bit more to the image than true-wireless would offer. There’s a bit of cable hanging down. This doesn’t mean these are wired headphones, merely that like the Powerbeats 3 that preceded them, that there will be a cable connecting the two earphones. Beyond that, they’ll be wireless.

You might recall the fun and games with the cost of the Mac Pro. Not only does a fully specced out model cost over $50,000, if you want the four castor wheels added to the machine, that’s going to cost you $400 for the wheels. Turns out the $400 wheels are missing something important. Brakes.

Cristiano Ronaldo: Juventus Star Talks Lyon Tie And Derby D’Italia, Which He Claims ‘Is As Good As El Clásico’